“Hotly anticipated vegan restaurant” sounds about as plausible as “President Trump,” and yet here we are: Yorkville’s Planta is Toronto’s latest evidence that veganism, touted as the healthiest way to lose weight and extend your life, has become extremely cool and increasingly mainstream. Plus, it’s a welcome antidote to scandals about shrimp-farming slaves and scary studies about the environmental impact of a meat-centric diet. After so many tomahawk steaks, charcuterie intermezzos and pork-butt ssäm feasts, we’re ready for a collective detox. 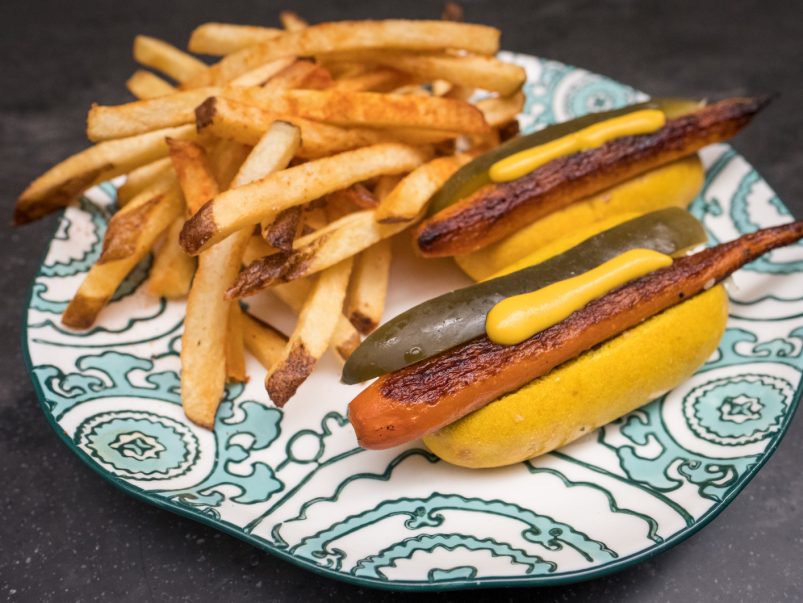 What’s on the menu at Planta, a plant-based restaurant from Nota Bene chef David Lee

Even if the moment is right, chef David Lee’s animal product–free restaurant, which opened in September, is a big gamble. He needs to persuade his fans, who followed him from Splendido to Nota Bene, that root vegetables can be as sexy as foie gras. Lee’s business partner is Steven Salm, who runs the group behind The Chase, Kasa Moto and Colette Grand Café. Between the two of them, they know how to make a restaurant work.

With Planta, they’ve avoided the strident associations of veganism by calling the menu “plant-based,” which sounds good for you, not punishing. The restaurant (in the former Pangaea space) is as airy as a West Elm catalogue, all white-washed surfaces, Arcade Fire music and curving banquettes upholstered in geometric-patterned synthetics—no leather permitted. Ponytailed servers, as poised as yoga instructors, wear animal-friendly Chuck Taylors. Your cocktail, made with cold-pressed juices, arrives on a silver tray, and what comes out of the kitchen is as striking as anything you’d get at any of Lee and Salm’s other restaurants. 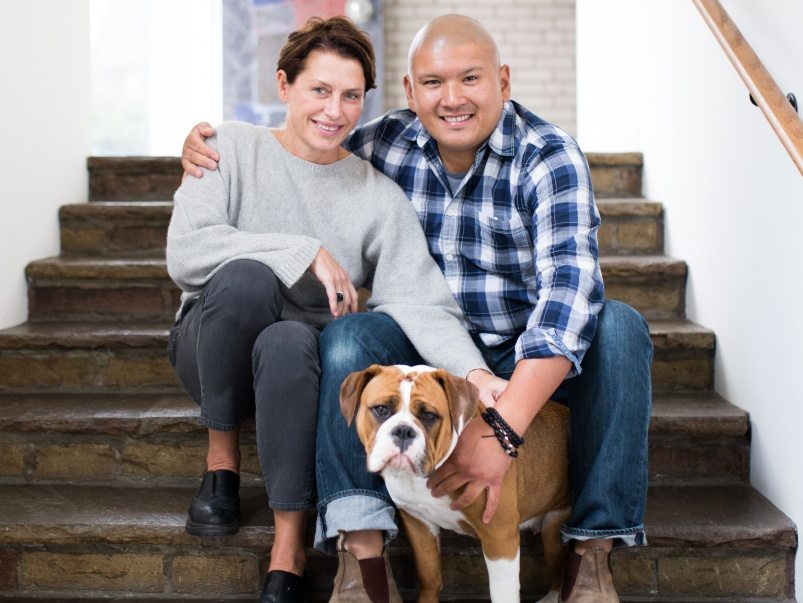 I’ll return to Planta just for the burger. Creating a delicious veggie patty that’s as good as the real thing requires ingenuity and a touch of sorcery, and Lee wanted his to rank with the famous (even among non-vegans) patty at New York’s Superiority Burger, or the trademarked Impossible Burger, which is served at a handful of exclusive restaurants like Momofuku Nishi and eerily replicates the texture of ground beef. Over the phone, Lee told me how he’d developed an early version using textured vegetable protein but wasn’t happy with it. He kept experimenting with various grains and flours, and even flew to Nishi to try the Impossible Burger for himself.

Finally, five days before Planta was set to open, he landed on a patty primarily made of black beans, mashed lentils and beetroot, plus a dozen spices. The beet lends a subtle sweetness and produces a nice char. The burger holds together well yet invites a good chow down, giving just like a fresh chuck patty. While no blindfolded taste-tester will mistake it for a real burger, it’s deeply satisfying. He serves it on a plush, house-made sesame bun with pickled onions, jalapeños, rounds of ripe tomato, a sheaf of Boston lettuce and mushrooms that have been smoked over white-oak chips, which, if you let your mind wander, pass as a fine substitute for bacon. It’s served with excellent seasoned fries, which I didn’t mind dipping in a “mayo” of tomatillo and soy milk.

I can also endorse the bowls of lentils or brown rice mixed with roasted fruits, sprouts and herbs, as well as snacks like deep-fried gyoza stuffed with a gingery kimchee and tots made from cauliflower, not tater. And I liked what Lee did with a watermelon plate—his variation on poke, the suddenly popular Hawaiian tuna dish that’s this year’s beet salad. He gently compresses the fruit with kombu, then tosses it with avocado chunks and, for crunchy contrast, nori chips.

But plant-based fare has its limitations. I’ve eaten at Planta several times and found as much to love as to not. I want the place to succeed, but often it’s a total turn-off and a case study in how rigid rules can hamper a restaurant. Lee and Salm avoid the term “vegan” yet still maintain a hard line on anything animal-derived. In the bourbon sour, they’ve replaced egg whites with aquafaba (a by-product of chickpeas), and the result is watery. When you order a cappuccino, you get a choice of almond, cashew or soy milk—none of which whip into a respectable foam. 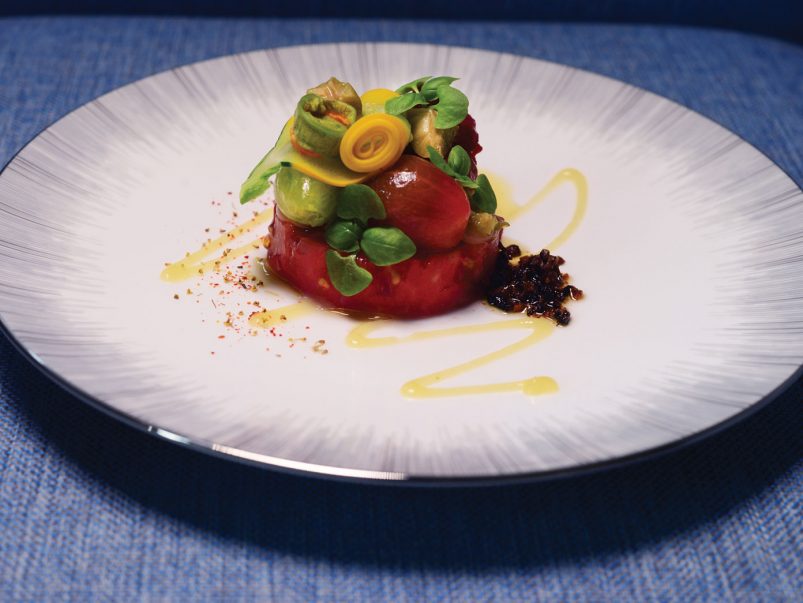 Many of Lee’s vegetal sleights of hand are unconvincing. A great veggie burger is something to admire, but too much of the Planta menu is dedicated to mimicking the sensation of eating animals. What’s called “ceviche” uses raw coconut to re-create the sliminess of fish, but, with a disorienting sweetness and not enough citrus zip, it’s more dessert than appetizer. The so-called crab cake is, in fact, a forgettable hash of hearts of palm rolled in panko and fried. (This hits another sore spot: Lee and Salm talk up Planta’s focus on local suppliers, when it’s rare that Ontario does well with tropical produce.)

The weirdest meat riff is what Lee pun-fully calls the 18 Carrot Dog, which is pretty much what it sounds like: a hot dog with a carrot in place of a wiener. He smokes carrots (heirloom, if there was any doubt) until they approximate the consistency of a ballpark dog, then slathers them in yellow mustard and sauerkraut. I’ll admit that, for a split second with my eyes closed, the combined aroma of the wood smoke and vinegary toppings triggered the correct memory file. But when my teeth met the carrot, well, I was chewing on a carrot in a bun. It’s the type of novelty dish that chefs today are obligated to create, hoping it’ll blow up on social media. (It did.)

Many vegans recoil at this kind of meaty kabuki theatre. I see their point. Why bother? My theory: Lee figured he had to broaden the appeal of a meatless restaurant by showing non-vegans that a carrot can be as flavourful as grilled sausage. But the effect for most non-vegans will only be to draw attention to what’s missing—not a lasting model for a plant-based restaurant. He could be wowing us with dishes that are truly original instead of producing pale replicas of something else.

It would be easier for me to complain about Planta if the place were sloppy, yet everything about it, as at the other Chase Group restaurants and Nota Bene, is perfectly polished. Lee has worried over every element of every plate. His staff includes an R&D guy named Trevor (he refused to tell me Trevor’s surname, for fear he’ll be poached), who helped Lee develop many parts of Planta’s menu, in particular the cheese substitutes, like the almond-based “parmesan” on the cauliflower tots and the cashew-based “mozza” that appears on two pizzas. I liked everything about those pizzas, including the blackened crust and the farro that’s supposed to resemble crumbled fennel sausage, but not the mock mozza. I ordered it on two occasions, and both times it played the worst trick: it looked to the eye like melted cheese, but the consistency was at once sandy and gloopy, and the flavour more like a metallic margarine. Pizza can handle all kinds of crazy toppings—just not that.

In the months before Planta’s unveiling, Lee opted to follow Salm’s lead and began adhering to a plant-based lifestyle. They’re both doing it because it makes them feel more vibrant and Zen, and they’ve recently introduced somewhat more plant-centric menus at their other restaurants. Lee told me that he’s presently 80 per cent plant-based. (As he said it, I thought of Ursula K. Le Guin’s descriptions of extraterrestrial species.) The other 20 per cent of his diet corresponds to when he’s out with his family and friends, who still eat meat. He told me he sees a future when animal products are the exception and everyone has accepted that to carry on otherwise is untenable. He’s probably right. By then, we’ll hopefully have evolved past carrot dogs.