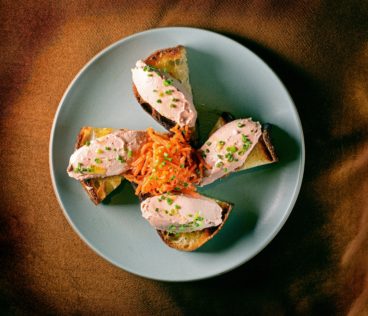 In the last few years, new condo towers have all but scrubbed clean Yonge Street’s legendary sleaze—its strip clubs and XXX video warrens—from ­College to Bloor. The latest makeover was a 1950s brick tower on Charles Street, a dingy Comfort Inn that was recently converted into a boutique hotel called the Anndore House. Outside, it’s been painted a gunmetal black that’s both tasteful and severe. Inside, there’s a café, a compact bar with dimly lit corners perfect for covert meetings, and Constantine, a new Mediterranean kitchen run by Craig Harding, of the perpetually wait-listed ­Dundas West spots La Palma and Campagnolo. The restaurant is the most polished thing to come to this stretch of Yonge since the Stanley Cup.

Cooking at a hotel restaurant is now a coveted gig: chefs appreciate the profile boost, as well as having the costs of the facilities and upkeep covered, as is usually the case, by the hotel owners. To stand out, properties like the Anndore House, the east end’s Broadview Hotel and Charles Khabouth’s Bisha want notable chefs to fill seats with more than just hotel guests. Chefs like ­Harding, whose menu at Constantine manages to combine everything trendy: Cal-Ital brightness, Levantine ­spicing, vegetable-forward entrées and a kitchen built around a crackling open-fire grill. Aside from the obligatory hotel-menu burger (Harding serves his with a salad of Israeli couscous and charred radicchio), it’s all designed to be shared, which always leads to a game of finding table space for half-finished plates and serving spoons.

I thought I’d had my fill of chicken liver pâté (lead image), but Harding’s is exceptionally smooth and sultry, smeared on crostini and served with a tangle of pickled shredded carrot. He also makes flatbread pizzas, bubbling and blackened from the wood oven, the best of them a cacio e pepe of creamy pecorino, stracchino, mozzarella and the deep funk of confit garlic; a bone-in short rib with a crust of lemony za’atar on a bed of charred tomatoes; and hand-cranked pastas, like a bowl of springy spaghetti dressed with olive oil–toasted bread crumbs and super-sweet ­cocktail shrimp sourced from Fogo Island. He’s attuned to what’s in season without being heavy-handed. One of my favourites on an early menu was a salad of endive and fennel, smoky from the grill, and dressed with sections of briefly available, sugary Cara Cara oranges and a sprinkling of fennel pollen. Each bite was new, and by turns crunchy, plush, sweet and sharp, everything brought into harmony by a brilliant vinaigrette laced with Campari.

It’s a high bar, but I wish the space were as interesting as Harding’s food. There are two ­dining rooms, both somehow over-designed and forgettable, all muted taupes, blond wood and row upon row of illuminated white glass vases that make you feel like you’re shopping for a wedding present at William Ashley. My advice is to instead focus your eyes and attention on the wine list, with its ­delicious Mediterranean oddities, and on desserts like a creamy halva mousse wrapped in a twirled sesame-honey snap and dusted with a lime snow.

This story originally appeared in the August 2018 issue of Toronto Life magazine. To subscribe, for just $24 a year, click here.