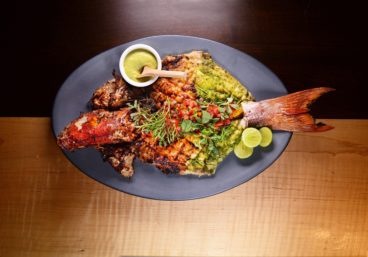 Quetzal, the latest addition to Grant van Gameren’s trend-making empire, is an ambitious exploration of Mexico’s cuisine—just don’t expect to find any tacos

One year ago, word got out that Grant van Gameren was planning yet another restaurant—his third in Little Italy—and rumours swirled. Excitement built: there would be an eight-metre open firepit; it would be a collaboration with Kate Chomyshyn and Julio Guajardo, the divinely inspired chef couple he’d first recruited for Kensington’s mescal-and-tostada spot El Rey; and it would be his biggest, most elaborate space yet, with a million-dollar-plus reno by Partisans, the designers behind van Gameren’s Gaudi-fantastical Bar Raval. Finally, after extensive recipe testing and a prolonged wait for the city’s electrical inspectors to give their blessing, it opened in August. If you emailed for a reservation in the first few weeks, you received an auto-reply politely suggesting you should try again much, much later.

You must try, though. Everything about Quetzal, named after an elusive Central American bird with flashy plumage, is extraordinary—it has shifted the restaurant world’s centre of gravity.

A year’s worth of construction was worth it: the plaster ceiling torques and curves, its arches dramatically aglow with concealed lights, like a Rei Kawakubo daydream of an exquisite intergalactic spacecraft. Turquoise leather banquettes run along one side and, down the other, the bar and the open kitchen. Flames from the firepit, dancing up the walls, are visible from almost every seat in the house. (And yet, because of a first-rate ventilation system, you don’t leave smelling like you’ve been toasting s’mores at camp.) The staff are polished, young and decked out in streetwear, a van Gameren trademark (only aprons distinguish servers from the clientele). Another trademark: the interesting acoustics. That ceiling seems to bend sound. You easily overhear sotto voce gossip from across the room but need to guess that your server is asking if you want another citrusy-salty michelada (you do).

I was already a fan of Chomyshyn and Guajardo’s brightly modern Mexican cooking at El Rey and Rosalinda (a vegan spot they opened downtown with van Gameren, Max Rimaldi and Jamie Cook in May—they’ve been busy). Quetzal is a bigger stage. The spotlight is on hero cuts of rib-eye, lamb barbacoa and, my favourite, pescado Zarandeado, line-caught fish (red snapper on one occasion) that’s butterflied and rubbed with red chorizo seasoning on one half, green chorizo seasoning on the other, and grilled. It’s smoky, perfectly timed and deeply satisfying wrapped in handmade tortillas and dressed with a sweet cherry tomato salsa. I was just as impressed by smaller dishes: a tartly refreshing scallop and halibut ceviche, arranged as a circle of petals with sections of Ontario-grown gherkins (which resemble Lilliputian watermelons); a bowl of grilled mixed mushrooms and a leek broth, with a meaty depth of flavour; all the masa, especially the version embellished with zucchini blossoms and precisely plated with a circle of crema and black bean sauce; and an incredible plate of coal-roasted, honey-coated beets. Frankly, I wasn’t craving beets—they’re on every restaurant menu, this decade’s kale salad—but at Quetzal they achieve a new height of sugary perfection.

Some of you will be disappointed that there are no churros. Instead, nearing the end of summer, Chomyshyn and Guajardo served a bowl of preserved peaches and cherries under a bracingly astringent guava foam. Even better was a strawberry granita (tart, floral and fluorescent pink) with a scoop of leche quemada ice cream and, the clincher, tarragon-flecked mini-meringues. It was new, a little strange and giddy-making, and more thrilling than a thousand cinnamon-dusted deep-fried dough sticks.