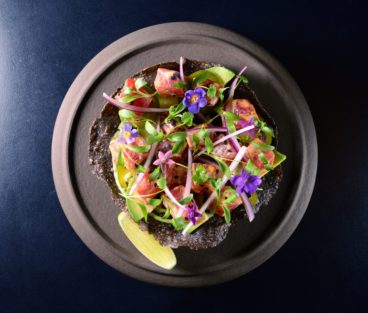 Hanif Harji’s nightclub-esque restaurants—the biggest and glitziest being Patria and Byblos—­follow a playbook. The hostess, dressed all in black, coolly takes her time processing the crowd at the door, as if to drive you mad with anticipation. The chatty servers steer you to their “personal favourite” ­cocktails. As night falls, the music gets louder until you give up on extended conversation. But it’s a playbook that works. The cocktails are tasty and worth every dollar, and the food, by executive chef Stuart Cameron, is impeccably ­executed and often delicious. Most impressively, Harji has figured out how to make you feel like you’re at the most exclusive place in town, ­pampered like a celebrity, even if you’re one of hundreds. I find myself planning my next visit even before leaving.

So it is with Mira. Harji, ever on top of a trend, has opened his new Peruvian restaurant around the corner from Patria and Weslodge, also part of his mini–King West empire. The address is technically on Wellington, but Mira’s discreetly marked entrance is a hike down an alley, past start-up offices and a few dumpsters. (The location last housed the bottle-service nightclub F-Stop.) The interior features loud pop-art murals, which are meant to evoke Lima’s trendy, touristy Miraflores neighbourhood. Contemporary Peruvian cooking—a mash-up of South American, Spanish, Italian, Japanese and ­Chinese—is having a moment. Mira joins Baro on King West, a party palace where the pisco never stops flowing; Kay Pacha on St. Clair, where chef Elias Salazar creates masterpieces from the humble potato; and Little Italy’s Mochica, where you can satisfy a craving for an alpaca burger, should you have one. Even the Ritz-Carlton flirted with a Peruvian menu last summer.

At Mira, Cameron focuses on Nikkei, the Peruvian subgenre that marries Japanese cooking techniques with Andean tubers, herbs and lots of fish. Every table starts with a complimentary bowl of canchita, the Peruvian version of corn nuts—they’re best spritzed with lime, and paired with a pisco cocktail or a chilled bottle from the long list of sakes. The menu is divided between the raw and the cooked, and there’s much to like on both sides. Of the five ceviches, the standout is the tiradito hiramasa—slices of kingfish, each dotted with sweet and fiery jam made from the Peruvian rocoto chili, and bathed, moments before arriving at the table, in a pool of jalapeño tiger’s milk, a zippy marinade of lime, chili and fish juice. Squid ink–blackened rice was too salty, but the accompanying snow peas and seared scallops were perfect, as was the buttery slab of grouper in creamy chupe, a chili-garlic sauce.

Every plate is picture-perfect, and pin lights point down at most tables to help with Instagramming. The most photogenic option is a ­dessert-for-two named El Huevo Malo—the bad egg. What arrives at the table is a chocolate sphere the size of your noggin. Your server gingerly cracks it open with a spoon, revealing an interior filled with bread pudding, fresh raspberries, yuzu marmalade, coffee ice cream, chunks of sponge toffee and edible petals—Cameron’s one-up on Brandon Olsen’s famous Ziggy Stardust Disco Egg at La Banane. It’s spectacular, not a little overwhelming, and exactly the glitzy end you want at a Harji restaurant.