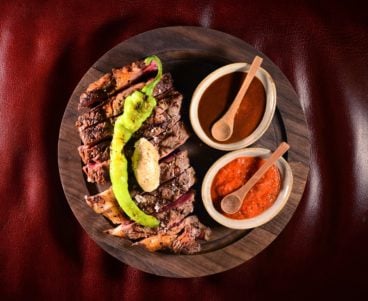 Toronto’s new David Chang restaurant makes a convincing case for the renewed relevance of the steak house. It’s also a test of how far he can stretch his Momofuku brand. Back in 2012, when Chang opened his University Avenue complex, he was still a cult hero for his umami-jolted ramen and steamed pork buns. Now he’s a household name, with a ­Netflix series (Ugly Delicious), a podcast, a cookbook, a secretive culinary lab and ­bottled Ssäm Sauce. In a reversal of the usual chef story, the more famous he grows, the less his restaurants keep to his original formula. It’s all by design: Momofuku is defined by an attitude—high-low and punk-gourmet—not by Chang himself.

Kōjin takes its name from the Japanese fire god, and replaces Daisho, which popularized platters of slow-roasted pork butt, and Shoto, where you sat at a counter and watched Chang’s cleverest disciples assemble pricy tasting-menu plates with tweezers. What was two rooms is now one, divided by a bar, Daisho’s tables and chairs replaced by leather banquettes, the room panelled in more wood than ­Conrad Black’s former library, and the lighting dimmed to a Raymond Chandler gloom.

While there are traces of Chang’s influence across the menu, including a snack of green tomato, peach, corn and Asian pear pickled in white kimchee juice, and a sirloin beef tartare with mushroom XO sauce, the focus is squarely on South America, specifically Colombia, where head chef Paula Navarrete was born. Steaks aren’t new to ­Momofuku—Daisho served a $600 rib-eye for eight—but they were never as exciting as the Korean fried chicken or rice cakes with spicy Chinese sausage. Navarrete caught Chang’s attention as a sous-chef at Noodle Bar and rose fast. She knows fine cuts of meat (she worked at Sanagan’s for a spell) and is a master of the kitchen’s open, wood-fired grill. Most of the dishes include something that’s come into contact with it—zucchini, potatoes, even avocado.

The scent of smoke hits you at Kōjin’s reception desk. It’s the start of a delicious sensory overload: a wine list heaving with 25 magnums, plus palate-challenging obscurities; a slick of tomato vinegar that radically intensifies the musky sweetness of the season’s first tomatoes; a hominy and cornmeal flatbread that’s equal parts Colombian arepa and crispy-spongy ­Chinese bing, fully addictive on its own but even better wrapped around Niagara prosciutto and pickled cherries; and especially the steaks, from bespoke, Ontario-raised Hereford-Angus cattle. My favourite was the rib-eye, mildly funky from 32 days of dry-aging, grilled to a magnificent, well-seasoned crust, a scoop of bone marrow butter the final note of excess. Navarrete serves it with a whole green chili, a forearm’s length and blackened from the grill, a dare on a plate.

I was most in awe of a side: for Tita’s Mash, named after the grandmother who inspired it, Navarrete whips fingerling potatoes with cheese curds and aged gouda until they’re airy as a cheesecake, then bakes them until they’re brown and bubbling. No conventional steak house spuds will ever satisfy again. The scent of the grill lingers on your clothes long after you’ve left—like you spent the night at a campfire. Whatever Chang’s Momofuku becomes, it stays with you.