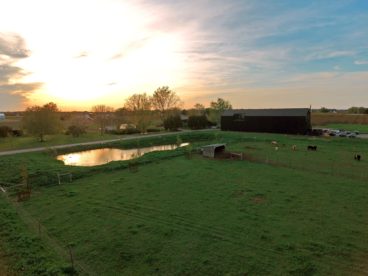 Five of the best restaurants outside Toronto to visit this summer

It’s a rare chef today who doesn’t dream of greener pastures, literally: running a restaurant in the country, with small-scale organic farmers next door and heirloom tomatoes plucked from the back garden. That’s why the new prestige posting for many chefs is at a secluded winery, a picturesque inn or a historic estate surrounded by nature. Follow their trail and you just might encounter some of the best dining in the entire country. 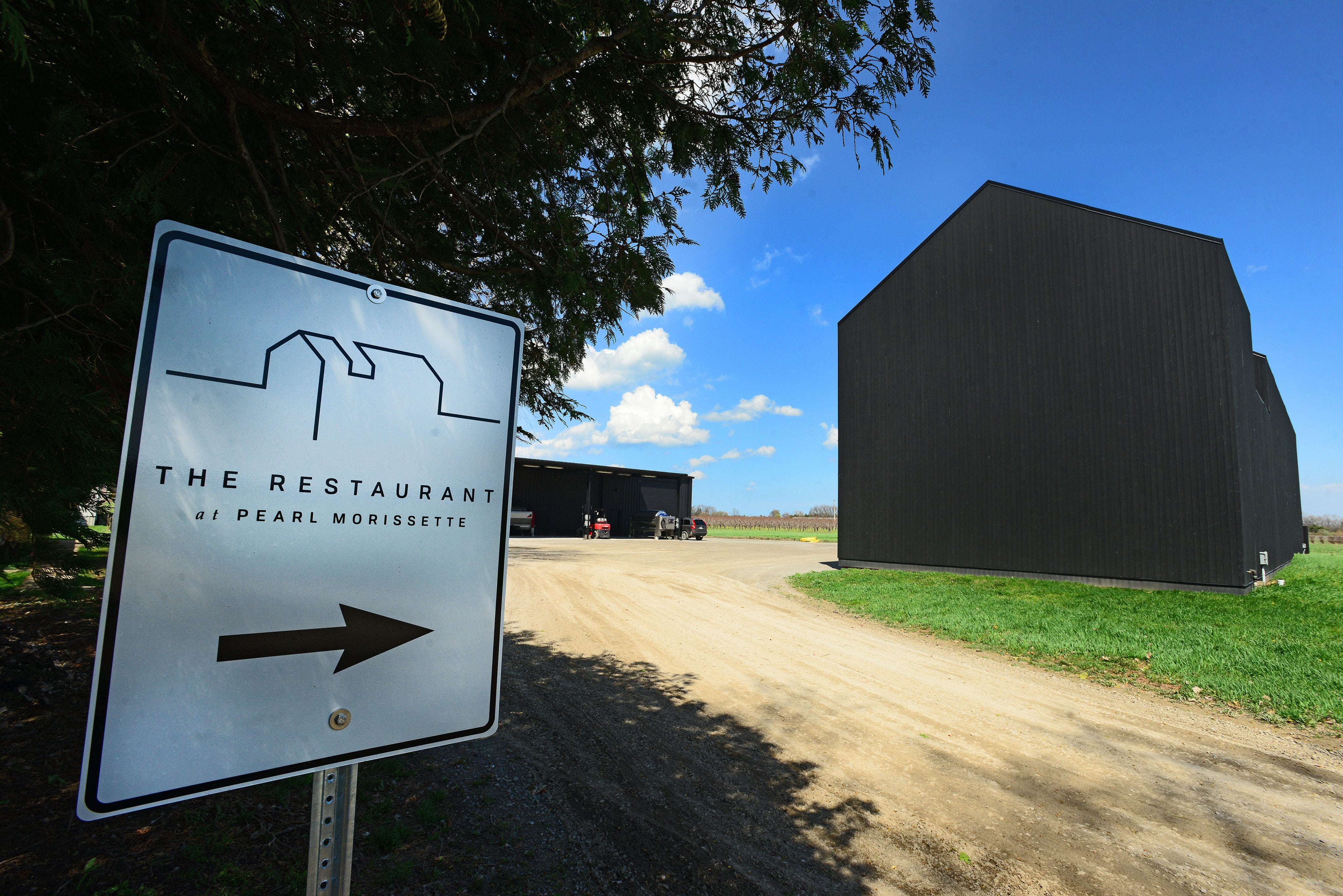 The Restaurant at Pearl Morissette

Cost: $78 per person for a five-course dinner, plus optional wine pairings.

The vineyards in the Jordan Station–Vineland area of the Niagara Peninsula tend to be smaller operations centred around a family farmhouse. The widely admired small-batch producer Pearl Morissette—which takes its name from the owner, Toronto developer-investor Mel Pearl, and his winery’s classically trained vigneron, Francois Morissette—is down a dirt driveway, past a pen of sunning pigs and grazing cows. While there’s no wine shop or buses parked in front (tastings are by appointment only), there is an austere black building, built to resemble a barn, that houses the most extraordinary new restaurant in the province, and perhaps the country.

The co-chefs, Daniel Hadida and Eric Robertson, are bookish, ambitious and French-trained. Their cooking credits include the great kitchens of Edulis and Langdon Hall, plus prestigious postings in France and Belgium. Their kitchen and the lofty, gallery-like dining room, which opened in November, are on the barn’s second floor, with views of Lake Ontario and the Niagara Escarpment deepening to purple at dusk.

Farm-to-table sounds too modest for Hadida and Robertson’s carte blanche menu, which changes so frequently that they’ve taken to calling it “microseasonal.” Introductory bites might include momentarily grilled, quarter-size Qualicum Bay scallops in a pool of butter and fermented peach juice; a few inches of a turnip, intensely sweet after being poached in chamomile-infused pear juice and wrapped in sheets of lardo and shavings of prickly pear; and a tiny bowl of oysters poached in pork broth made from salted, dried ham (those pigs do more than sun themselves). That’s followed by three savoury and two dessert courses, each delivered with a quick explanation of kitchen wizardry so involved that the only reasonable response is “wow.” Consider the potato: first shaved into a long, paper-thin ribbon, it’s wrapped into a tight spiral with extra-peppery arugula, then pan-roasted with beer and whey, and finally draped, for good measure, with potato cream and pops of caramel-coloured pickerel roe. No less ingenious are coins of carrots, fermented in salt until they taste like a cross between candied apples and cedar, that accompany a fillet of line-caught Nova Scotia halibut steamed and dusted with a powder of dried sassafras leaf; the rutabaga syrup used to glaze a chicken breast that has been slow-smoked and finished on the grill; and the clouds of parsnip mousse in a dessert of creamy oat ice cream and a streusel-like dusting of roasted chicory.

Many diners are already fans of Morissette’s wines, available as pairings or by the bottle. I’m especially fond of the 2016 Cuvée Sputnik, a frothy riesling that seems to change profile with each sip. Like Hadida and Robertson’s cooking, it has personality to spare. 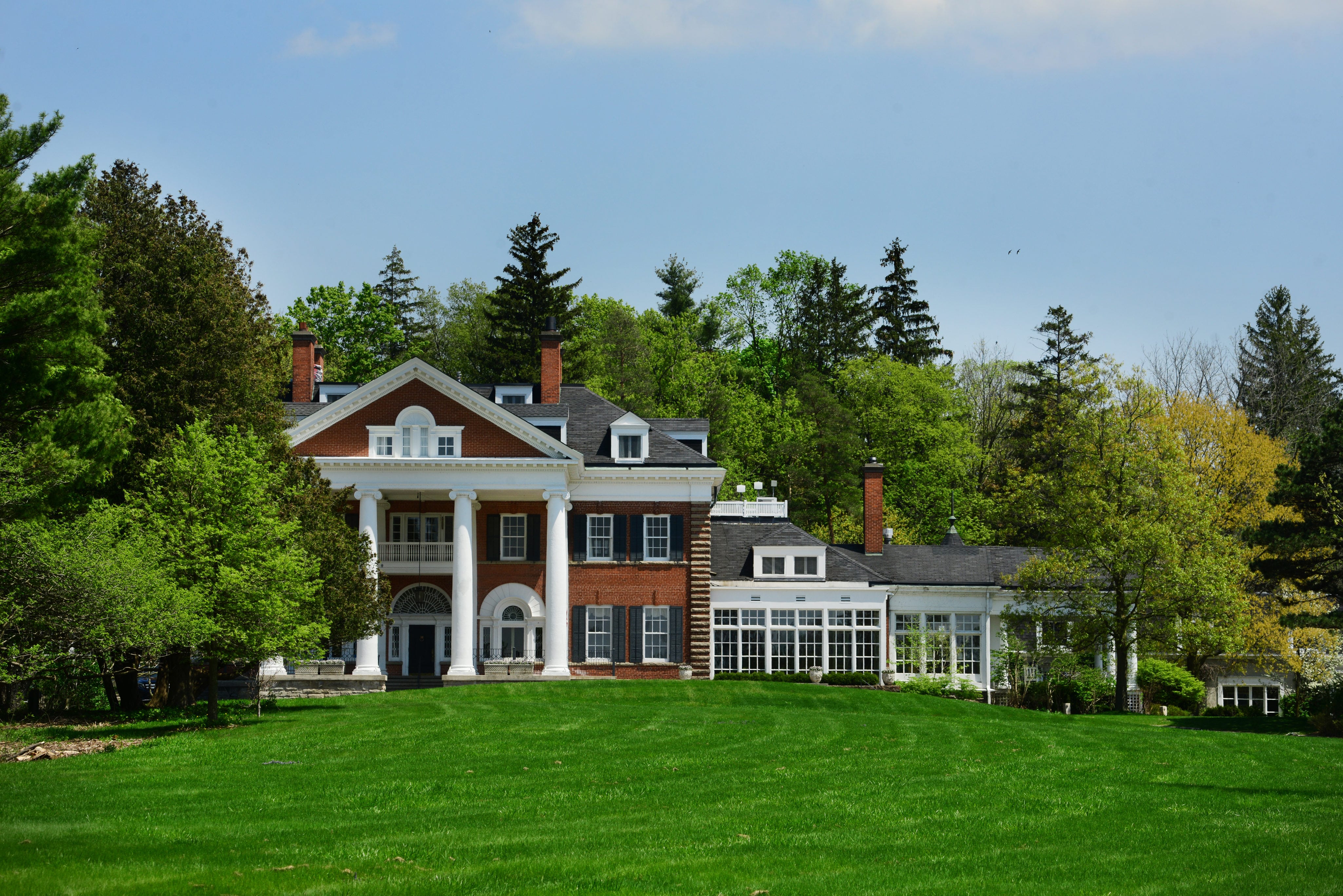 Driving time from Toronto: One hour

The 116-year-old mansion, converted to a country hotel and spa in the late 1980s, seems like it was purpose-built for wedding photography—especially the 30 hectares of manicured gardens that also supply its kitchen with produce, herbs and honey. Jason Bangerter, who made his name running O&B’s Auberge du Pommier, took over as chef in 2013. The grand surroundings come with valet parking, a dress code (jeans are forbidden and men encouraged to bring suit jackets) and a classical pianist who might cut loose with a sleepy version of “Lady in Red.” If you’ve travelled this far for dinner, splurge on the seasonal tasting menu, which is equally polished, exquisite and eye-catching.

Fried sunchokes are served on a slab of bark, B.C. caviar in an ornate glass vitrine atop a piece of porcelain shaped like a chicken foot, and the scallop with a lemongrass velouté in a deep stoneware bowl into which the server pours a flower tea that activates a rising mist of dry ice. The list of extravagances extends to a beef cheek blanketed in shavings of black truffle, a ruby slice of uncommonly tender seared venison glazed with duck fat, and an intensely creamy dark chocolate mousse jolted by salty flecks of crisp chicken skin. At some point in the evening, usually after the second bottle of wine, neighbouring tables start comparing notes on their dinners and discover that, oh, you’re from Toronto, too? Followed by talk of wine club memberships, the kids’ outrageous tuition costs and the perils of downtown commutes. Travel as far as you want; the city is never far behind. 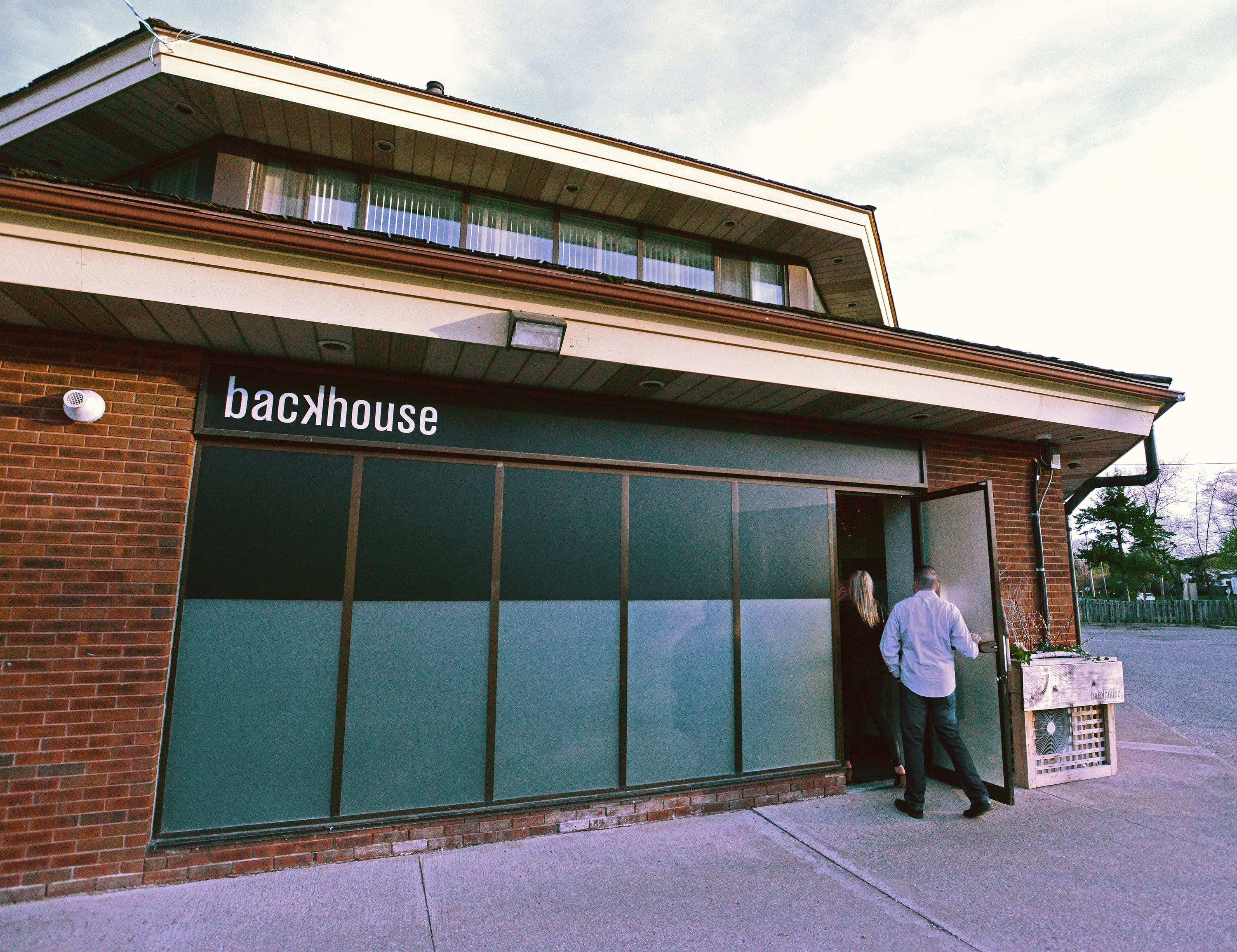 There’s no shortage of charming gingerbread storefronts in Niagara-on-the-Lake. But this restaurant sits next to a Subway and a convenience store in a strip mall far removed from the town’s picturesque main street. It’s one of those unpromising locations that only heightens the feeling of a special discovery. Chef Ryan Crawford—taking inspiration from an apprenticeship at Michael Stadtländer’s iconic Eigensinn Farm and a spell at the French Laundry, Thomas Keller’s Napa Valley landmark— practises what he grandly calls “integrated cool-climate cuisine,” borrowing a wine term to describe how almost everything he cooks hails from nearby, including from his own produce farm less than a kilometre away.

He cures his own bresaola and brines his own bread-and-butter pickles. He dresses a salad of just-picked greens with barely-there verjus and locally cold-pressed canola oil. The pork in a light ragoût for a bowl of hand-made rigatoni comes from Berkshire pigs that roam freely on a neighbouring farm, dining on acorns and spent grains from the Oast House brewery. The dining room, filled with happy Shaw-goers, is spare and elegant, with oak logs stacked by the entry, a glassed-in wine cellar, and a view of an open kitchen where Crawford works a wood-fired brick oven and grill. I especially recommend the burger, which is flash-charred, and stacked with crisped pancetta, a funky aïoli made with local black garlic, pickles and melting slices of mimolette. It’s so good you might believe burgers are a local invention, too. 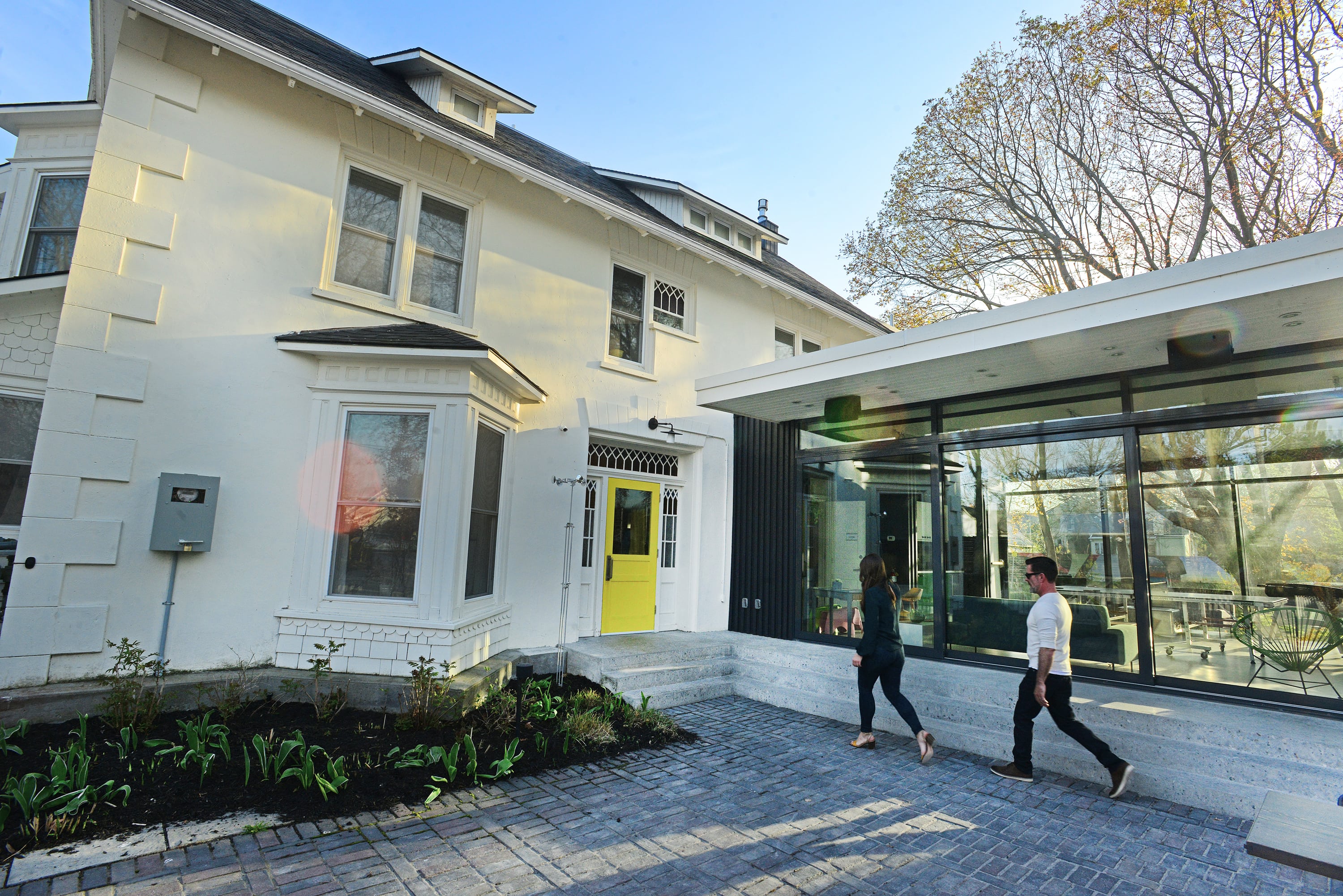 The marketing pics for the Drake’s Prince Edward County inn give the impression of countryside isolation and Hudson’s Bay blanket–wrapped stargazing around a campfire. Instead, it’s located smack in the middle of small town Wellington, a few steps from the main street, where the big attraction is a Foodland that’s overrun on weekends with ice cream–seeking campers from nearby Sandbanks Provincial Park. What the inn lacks in seclusion it makes up for with signature Drakeness. It’s heavily art-directed, nostalgic and woodsy, like a Wes Anderson movie set in Ontario cottage country, with a Ping-Pong room, crannies stuffed with vintage Canadian bric-a-brac and surreal-ish contemporary art.

The inn’s bar, serving P.E.C. wines and clever variations on classic cocktails, is the county’s most dependable nightlife destination—weekly open-mike nights often become sing-alongs. What’s not a surprise is the inn’s restaurant menu, which shares DNA, and an emphasis on super-hearty fare, with the Drake’s three Toronto locations; the chef in charge is Alexandra Feswick, until recently the executive chef of the Queen West flagship. I’m fond of her crispy salt-cod latkes dipped in crème fraîche; a richly cheesy block of mushroom-and-taleggio lasagna; and roast chicken from a county supplier, its skin crisp and mahogany, with a side of enough root veg to see you through next winter. Some nights, she’ll roast those chickens over an outdoor firepit—the same one from the photos. 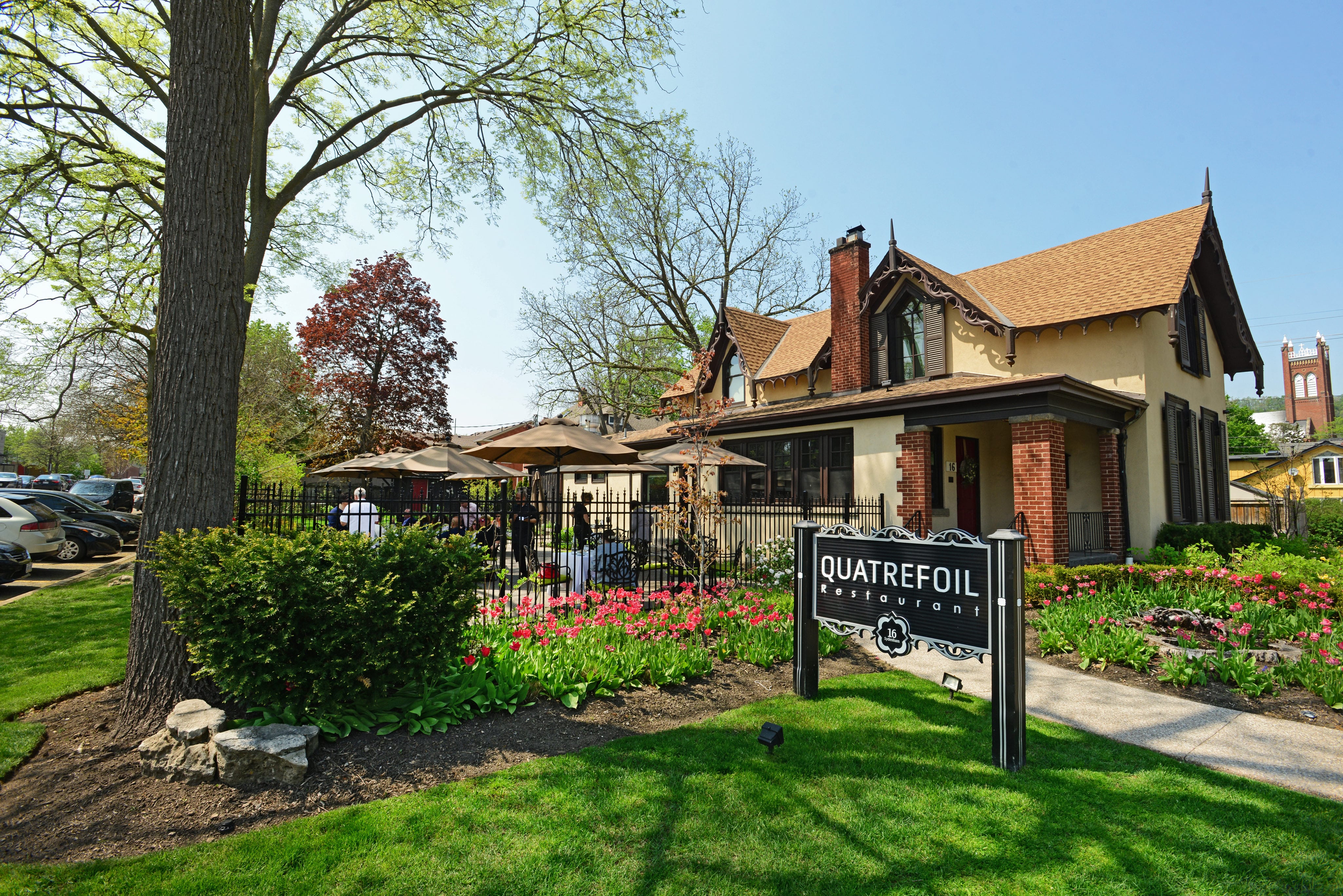 Driving time from Toronto: One hour

If there’s ever a weekend traffic jam in the Hamilton suburb of Dundas, condo-crammed Torontonians are a likely cause, drawn here by tales of affordable detached (detached!) houses on leafy streets, a main thoroughfare lined with cute boutiques and smart espresso bars run by disarmingly cheery millennials, and a commute that feels only slightly longer than the wait for a seat on a King West streetcar. All is true—and you can start planning your move over dinner. Quatrefoil’s co-owners, Fraser Macfarlane and Georgina Mitropoulos— he’s the chef; she’s a former chef who runs the front-of-house—trained under Scaramouche’s Keith Froggett and in some of Europe’s best restaurants. It shows in the crisp white linens, flickering votive candles, smooth wait staff, and cooking that’s elegantly French and occasionally trendy, but never intimidatingly far out—you’ll recognize everything on your plate.

My most recent visit was on the first warm night of spring, and there was a distinct sense of celebration in the full house of partying colleagues pillaging the long, thoughtful wine list; date-night parents, phones at the ready for emergency response; and at least one proposal (we all clapped). I loved my peppery torchon of foie gras, dressed with three variations of carrots (pickled ribbons, a jam and a jelly); a tartare of ruby-red bison and overly generous shavings of black truffle, with a thick slice of house-made brioche; the rich coat of jus on short ribs, so tender they collapse at the gentlest touch; and the contrast of creamy, saffron-scented yogurt and toasted wheat berries hiding under a slab of perfectly seared Arctic char. Desserts tend toward the abstract, like a deconstructed pie of intensely sweet maple fudge, torched marshmallow and a drift of buttermilk sorbet. A word of warning: the proportions of everything—save the amuse-bouche and meal-ending passion fruit macaron—are as big as a Dundas backyard.

This story originally appeared in the July 2018 issue of Toronto Life magazine. To subscribe, for just $24 a year, click here.