A salute to the trend-bucking restaurants aiming for something timeless How our star system works »

When Chantecler first opened in Parkdale in 2012, it was swarmed by excitable foodies, myself included. We were lured there by the chef, Jonathan Poon, who hit every possible fad: foraging, molecular gastronomy, artisanal pickling, fancy takes on Asian street food and courses that disappeared in a single bite.

Last year, Poon parted ways with his business partner, Jacob Wharton-Shukster, and he now devotes himself to Bar Fancy down the street. Wharton-Shukster wanted to remake his restaurant into something more timeless, in the image of Montreal’s L’Express: the sort of place where you can read alone at the bar, nursing a kir royale and quietly contemplating your quiche. And he had just the chef to do it: Jesse Mutch, who’s 26 and very much an up-and-comer.

The signs weren’t promising on my first visit to Chantecler 2.0 this past summer. The place was empty at 6:30 on a Friday night, except for a sullen, silent couple. My server steered me away from the cocktail list, rolling her eyes as she apologized that the bartender hadn’t yet arrived. And then, on cue, someone dropped a stack of pots and pans in the compact kitchen, which is on display for every seat in the house. (It’s a small place.) 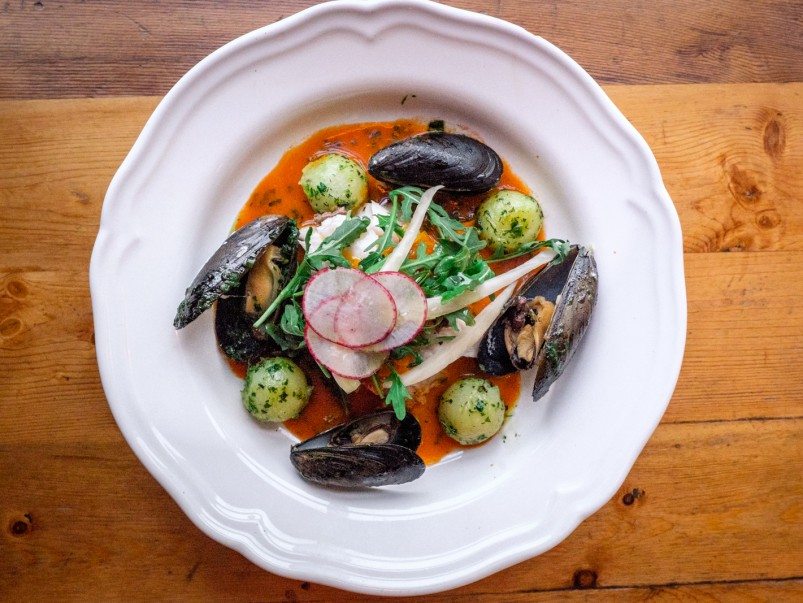 But there was Mutch, his mop of hair held back by a headband and a faded Parkdale T-shirt under his apron, shucking oysters like he still had the Chopped camera crew trained upon him. Turns out, this reality TV runner-up is an uncommonly deft interpreter of French food, and I ended up having one of my most memorable meals of the year.

Mutch modernized crispy, battered frog legs with a very un-Gallic sweet-and-sour sauce, a slash of crème fraîche and an almond-shallot crumble. He tossed a salad of baby kale and meaty field tomatoes in a dill cream dressing that managed to be both rich and subtle (dill tends to shout). He stuffed a half-chicken, the bird’s skin browned and crunchy, with an exceptionally silky mousseline of chicken tenders. Around a butter-poached fillet of snapper, punctuated by hunks of salty black olive, Mutch pinwheeled mussels, Parisian potatoes and lemony sections of artichoke.

His signature is restraint; there’s not one frill on his plates—no distracting foams or ash. Instead, like much older cooks who came of age before the rise of TV chef competitions, he’s chasing after Platonic ideals: the most oniony French onion soup, the puffiest gougère, the oyster so plump and briny it could very well have been pulled from a New Brunswick bay moments before.

When I came up for air and looked around, I realized that the room had filled and my eye-rolling server was warning walk-in couples of the three-hour wait.

Adjusting my belt, I ruled out the baked Alaska, another classic, and had a parfait of lemon curd, strawberry coulis and graham crumbs. Someone in the kitchen had exerted just the right amount of smarts and precision—not too sweet and not too tart.

I’ve returned a few times since the revamp and every visit was consistently great. It’s one of the few restaurants where I prefer to sit at the bar. Wharton-Shukster matches the care Mutch gives the food menu with a smart list of serious cocktails (my go-to, a G&T made with house tonic and a slice of grapefruit) and friendly, moderately priced French bottles.

There’s a business case to be made for a neighbourhood restaurant to avoid flash-in-the-pan trendiness in pursuit of any-night-of-the-week appeal. Toronto doesn’t have enough such institutions that prove reliably impressive without tasting menus, fanfare, soft openings, TIFF parties or social media campaigns. Places where it’s not necessary to Google every word on the menu.

Chantecler’s closest kin in Toronto is Bar Begonia, the French spot restaurateur Anthony Rose opened at the beginning of the year. It also eschews trendiness and, in doing so, ended up my other favourite new hangout of 2016. 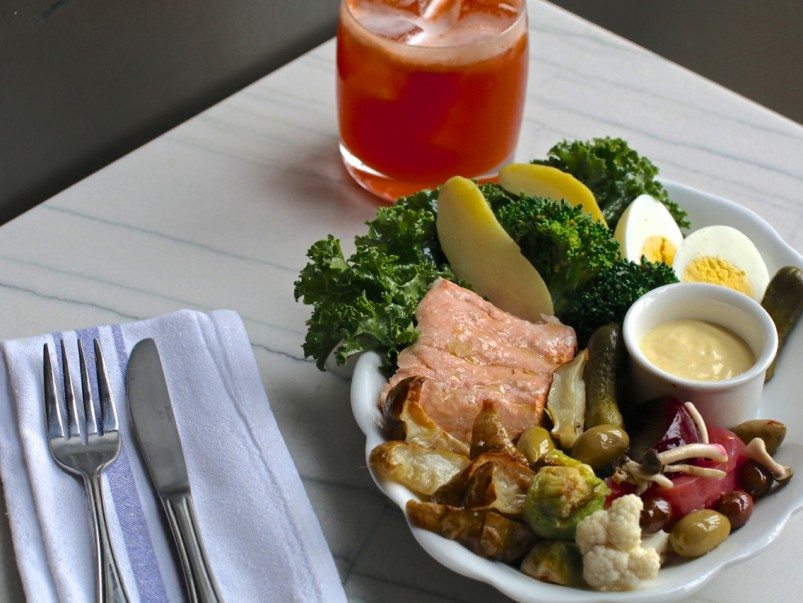 The drab stucco exterior along Dupont doesn’t prepare you for the interior’s handsome curving oak bar, Matisse-like murals of the female form and rows of white marble tables occupied by midtown Gen X-ers imagining, with good reason, that they’re on the Left Bank.

Bar Begonia is, as the name says, first and foremost a place to get a drink. The Wychwood Park Swizzle, a cocktail of tequila and apricot liqueur, is appropriately tart, and the Sun Also Rises will knock you flat with its mix of gin, sparkling wine and pastis. But the campiest choice is a demi of picon bière, a draft beer infused with a shot of citrusy aperitif. The scene requires Serge Gainsbourg, but the late-’80s college rock playlist only makes me love the place more.

Much of the menu—even more old-fashioned than Chantecler’s—is meant for snacking: artichokes, simmered in white wine, with a garlicky aïoli; tidy triangles of chickpea panisse with a tzatziki-like cucumber dip; toast loaded with ratatouille (ratatouille!), grilled sardines and chili. The chef prepares proper rillettes of shredded duck to be smeared on more toasts.

It’s all delicious, though there’s not much choice among mains: a daily fish, a cut of cow and the requisite duck confit. I can recommend all three, especially the rosy slices of flatiron steak smeared with full-fat butter (tip: dip your frites in it). It’s usually hard to get excited about whitefish, which is often as bland as its name would suggest, but Begonia’s fillet is another standout, coated in garden herbs on a bed of poached fennel and cherry tomatoes.

Perfectly executed simplicity is what makes Bar Begonia and Chantecler worthy of the repeat visits. They’re places where I wouldn’t mind becoming one of those-old timers who returns, week after week, and orders the same thing every time. With a picon bière, of course.