Inspired by Montreal’s L’Express, Chantecler’s new incarnation moves away from precious small plates to larger-format French classics. Mutch—who worked as a server at the restaurant for eight months before taking over the kitchen—has designed a menu filled with shareable portions of things like steak tartare, frog legs, chicken ballotine and duck à l’orange. A late-night menu is available until 2 a.m.

A side of green beans with hollandaise sauce, brown butter and almond crumble. $6

Ballotine de poulet: half of a deboned bird stuffed with chicken mousse is cooked sous vide and then fried. It’s served with chicken gravy, marinated mushrooms and greens. $25.

Cider, a long list of craft beer and a tight, conservatively priced wine list focused on natural and biodynamic wines. Fans of Chantecler’s signature gin-and-grapefruit tonic can still find it on the menu, but it’s now joined by the bar’s signature takes on classic cocktails.

The wee dining area is unchanged—but the basement and washrooms got a facelift. 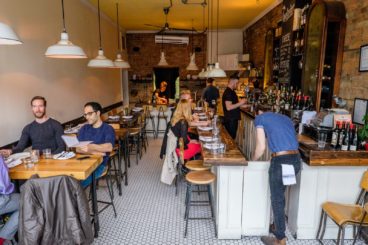