The entrance to Alo, the best restaurant to open in the city this year—in many years—isn’t promising. The door, beside the Hero Burger in a Victorian-era building at Queen and Spadina, is easy to miss. It opens into a narrow hall that leads to an ancient elevator shared with a tattoo parlour. You may worry you’ve taken a wrong turn into a Moscow interrogation facility. So when the elevator finally creaks open on the third floor, the beautiful space that’s revealed is a shock.

A year and a half ago, the 35-year-old chef Patrick Kriss commenced gutting what was, in the 1990s, the atelier of the quirky fashion house Hoax Couture. He hauled up a fortune in kitchen equipment and hired Commute, the designers behind the flashy look of Byblos, Patria and the Ritz. For Alo, they’ve created something special, one of those timeless restaurants like Canoe, high in its bank tower, or Edulis, cozily hunkered in its worker’s cottage. Alo reminds me of a smart private club because of the details: the late-day sun pouring through the gem-like liquor bottles on the open shelves above the mahogany bar; the dusky mural of water birds and lilies; the discreet brass pull in the middle of said mural that slides open a hidden panel to reveal a corridor of washrooms; the ample space between tables, such that you don’t need to slip sideways or worry about knocking your neighbours’ stemware when you take your seat. There are no bad tables, though the most desirable one is a circular booth inhabiting a corner turret, floating serenely above the street life.

I wasn’t thrilled when I heard the news that Kriss was opening a tasting menu restaurant. A couple of years ago, when it seemed like every chef in town had abandoned à la carte, tasting menus became synonymous with price gouging, half-baked (often literally) molecular-gastronomical bungles, awkward lectures from servers over the piles of obscure foodstuffs, and four hours of your life you’d never get back. Which was a shame, because, when ­executed by a talented chef, a tasting menu is ideal for showing off what’s seasonal, and the small-plate format allows the chef to divvy up pricy ingredients among several ­diners. Done right, they’re the all-star revues of dining. 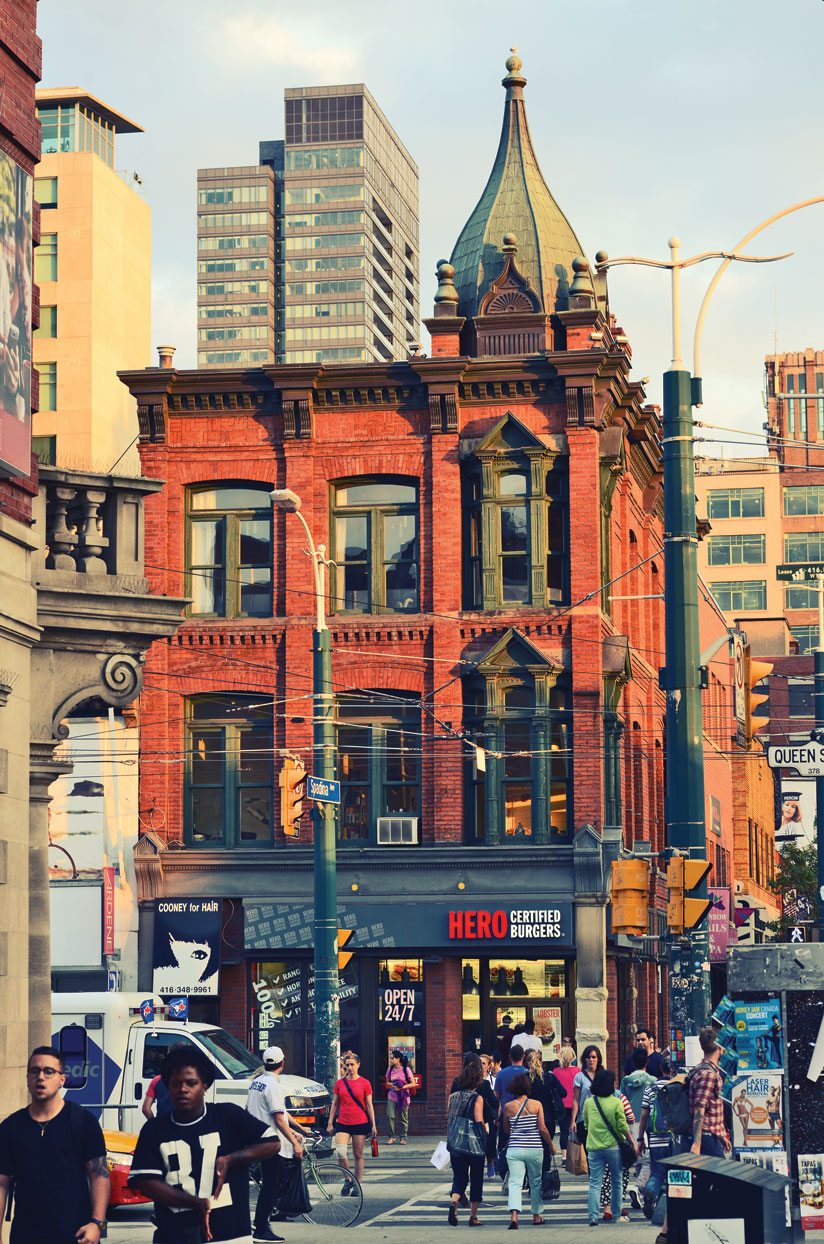 If you do have the time and a couple of hundred bucks to spare for you and a date, there’s nothing better than the tasting menus at Canoe, Actinolite or Momofuku Shōtō. The most outrageous version of all is at Splendido, where Kriss once cooked under the great Victor Barry, the city’s torchbearer for imaginative fine dining. On my last visit, Barry’s menu stretched to 18 courses, through cornettos stuffed with salmon roe and a blue spruce–flavoured foam, freshly made cheese with rosewood honey, oysters under glass domes filled with applewood smoke, five-spice smoked beets with a dash of spruce ash, plump gnocchi dressed with shavings of Aussie black truffle, and a wildly delicious dish of five-hour-roasted carrots, carrot foam, pickled ginger and granola that I’ll still be craving when I’m in my grave. After the ninth or tenth plate, however, I began to dread every time a server approached the table. This excess, I reflected, was what the era of foodies with Instagram followers had wrought. Only a Brando or Trump could stomach a dinner at Splendido more than once in a blue moon.

Alo avoids all the usual tasting menu pitfalls. First off, Kriss gives diners options: there are five courses, and you get a choice of two options for each. (Counting the amuse-bouche and intermediary courses, the number of plates on many nights actually hits 10.) The price per person is $89, which is an investment but less than the $150 you pay at Shōtō or the $180 at ­Splendido. And there’s not a whiff of stuffiness about the place, which is run by the front of house manager Amanda Bradley, who during her two years as general ­manager at George made the formal, sprawling room feel like an intimate dinner party.

What ultimately sets Alo apart is Kriss. The top chefs, in my experience, are deeply in love with their ingredients. On my first visit at the end of July, Kriss opened with an amuse-bouche of peas on peas on peas. He’d made the humble garden plant into something sexily exotic: a buttermilk sorbet dusted with dehydrated peas, encircled by dots of emulsified peas and crowned with twisting strands of pea shoots. The pea flavours were bright and distinct, an introduction for everything that followed.

It reminded me of the culinary razzle-dazzle I encountered at the short-lived, excellent Little Italy restaurant Acadia, Kriss’s post before Alo. Acadia was his first headliner, before which he cooked at Auberge du Pommier, Daniel in N.Y.C., Luma and Splendido. One major benefit of his peripatetic restaurant journey is his close contacts with suppliers. He told me proudly how he called in every variety of radish he could get his hands on for one dish at Alo, before deciding on a long, carrot-like breed named Cincinnati, which debuted as a peppery pickle on a slice of Japanese sea bream sashimi alongside miniature spears of earthy samphire. He gets most of the heirloom produce, like the Linzer Delikatess potatoes served with salmon roe and corn, from Vicki’s Veggies. He sources all his meats from the Roncesvalles specialty butcher Custodio’s, which aged the Perth County Yorkshire pork that was the last of my savoury courses one night. The blushing cube of meat shared its plate with halves of sugary roasted grapes and ­crumbled toasted walnuts. Another night, I went for the lamb option, which isn’t a shy meat but somehow, in Kriss’s kitchen, became as tender and sweet as beef cheek, with a smoky strip of roasted skin that balanced the plate’s sharp relish of lemon and ramps.

There were so many more terrific ­flavours in between: a lightly poached oyster in a foam of potato and cream; cubes of buttery pain au lait, their golden heads sprinkled with sea salt; foie gras that Kriss had frozen and shaved, in a bout of hedonistic frenzy, over a deeply intense stew of veal tendon, trotters, cockscomb, kombu and bonito. He’s thought through every plate, right down to the plates themselves: much of the tableware was custom-made by midtown ceramic studio Kosoy and Bouchard. There’s an affordable wine list (the ­priciest bottle, a 1998 premier cru, is $250) built by the sommelier Anjana ­Viswanatha, a Canoe veteran who has a thing for bio­dynamic vintners. An ever-shifting tasting menu is a nightly test for a sommelier. Viswanatha paired a crisp sparkling rosé with the peas, a musky madeira with the pain au lait and a complex Pearl ­Morissette riesling with a plate of seared hamachi and chanterelle foam—the matches were apt and will hopefully grow more experimental as she builds her cellar.

Alo’s desserts are made by the pastry chef Cori Murphy, who also worked at Canoe. Most nights you get to choose a dessert made from white, milk or dark chocolate, and there is no wrong answer. The white version brought a bowl of piped mousse, caramelized white chocolate nuggets and a neon-green cucumber granita (which sounds like a mistake but was a minor revelation, the floral cuke underlining the fruity quality of the chocolate). The dark version involved a dark chocolate tuile piped with dark chocolate mousse, a scoop of chocolate gelato and preserved sour cherries, plus, for a nutty counterpoint, a sesame foam. I’d describe the no-less-wonderful milk option, but then I wouldn’t have the space to tell you about the strawberry bavarois, a jiggling cream garnished with peak-season berries and feathery wisps of lovage that arrived last (there are usually two or three dessert courses per meal). It was a stroke of ­sugary brilliance.

Kriss often stands just outside his kitchen making final adjustments to each plate, occasionally turning to cast an appraising glance around the tables. He looks like he’s watching his kid take his first solo steps on a playground. He’s got nothing to worry about.

One thought on “Course correction: At his audacious new restaurant, Alo, Patrick Kriss revives the sullied art of the tasting menu”