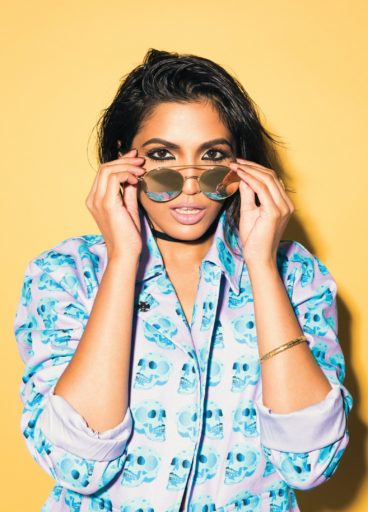 Maria Qamar, who makes art under the name Hatecopy, sits down to talk wearing fitted track pants and a bodysuit of her own design covered in black skulls. Smack in the centre of her chest is a disembodied red skull adorned with the nose chain and Tikka headpiece of an Indian bride. But this hell bride’s jaws are wide open, locked in a scream so big it would blow a groom right off the altar.

The image is an insider wink to Qamar’s desi fan base, unnervingly beautiful and also pretty funny. That’s the signature synthesis of the 26-year-old’s work, and it’s an of-the-moment aesthetic that’s propelled her in two years from Toronto ad agency grunt to Instagram celebrity with 108,000 followers, including superfan Mindy Kaling. Last spring, she sold out her paintings at an art show in London, and now, she’s a fashion designer and a debut author with a comic pocket guide to young womanhood called Trust No Aunty.

“Humour is the way I cope with trauma,” says Qamar, in the living room of her little glass downtown apartment in the sky. Her bare feet are curled under her on a couch that she’s folded out into a giant square, because it’s where she’s been sleeping. She moved in only a few days ago, and with photo shoots and press for her new book, she hasn’t had time to unpack. Like everything in Qamar’s life, including herself, the apartment is a work in progress.

During our conversation, she discusses bullying, body shaming, trigger warnings, and her social anxiety and ADHD. These trauma touchstones, mentioned with utter sincerity, are almost satirically millennial. It’s kind of weird to encounter someone who feels so of her generation, like wandering into a Baby Boomers Only party where everyone is talking about Timothy Leary and humming Procol Harum. Qamar also exudes the flip side of that generational hypersensitivity: millennial determination. “There was a point where I used to hide from myself,” she says, “because I was literally getting bullied so much. But now it’s like, I would never. Why hide from yourself? This is who I am. This is the only lens I look through. This is the only body I can exist in. This is the only skin I have.”

She is working like mad for her success, and totally certain that she and her art deserve to be seen, in a city (maybe a country, maybe a world) where she once felt invisible and even under siege.

“Even on Facebook,” she says, “people would say things like, ‘Oh, I hate Pakis, but you’re the good kind.’ Now those people are congratulating me on embracing my culture.” She gives a skeptical look, just this side of an eye roll. “I need them to see and understand and educate themselves. I want this topic to be exhausted.”

Two years ago, Qamar was working at an ad agency, and generally irritated that her parents had steered her away from pursuing art and toward a real job. So she became a copywriter—hence the name Hatecopy. After being laid off, Qamar turned to art to make herself feel better, as she had since she was a kid. One night, she borrowed an image from artist Roy Lichtenstein, who borrowed his subjects from comic books: portraits of exaggerated WASP femininity, weeping alongside a thought bubble. But as she sketched, Qamar’s crying heroine emerged with full lips and brown skin. She added a bindi and earrings, and penned a joke in the bubble: “I burnt the rotis.” Qamar posted the image on Instagram, and the response was ecstatic.

She began churning out pop art images (hand-sketched and inked; colour added in Photoshop) with the tenor of Indian soap opera melodrama, at once puncturing and celebrating stereotypes. Anyone would be drawn to the vivid colour and punk attitude, but the images connected especially with young South Asian transplants like Qamar herself, who recognized the tropes of nosy aunties and clueless white guys who say “namaste” to brown girls. Qamar dots her work with words like “laddoo” and “jhoota,” and isn’t interested in translating language or culture to make white people feel comfortable. “The artwork is meant for desis,” says Qamar. “We were always trying to fit in. But now I’m like, I’m just gonna talk to my people for a minute.”

Qamar and her family immigrated to Canada from Karachi in 2000, when she was nine. When they first walked outside Pearson airport, snow was falling, and Qamar screamed, “We gotta get inside!” She, her brother and her parents moved in with another family, so there were eight people in a two-room apartment in Scarborough, in a building of immigrants where each floor smelled like a different delicious food.

Her parents, both chemists, found work and relocated the family to Mississauga. They had newcomer dreams for their kids (Qamar sighs that she was supposed to be a pharmacist; her brother is a doctor) and didn’t seem to notice that Qamar wasn’t experiencing the multi-culti hug-fest version of Canada. Britney Spears was worshipped, and Qamar recalls being bullied regularly for her looks and mocked for the smell of her lunch.

Like many tormented teens, she turned goth, joining a crew of black-clad desi misfits in high school. “We listened to metal and were all like, ‘Life is meaningless.’ ” She used sketchbooks as journals and therapy, and in the comics she drew there, her characters had snappy comebacks and enacted revenge. “In art, things were better for me,” she says.

Last year, the Toronto fashion house Nuvango approached Qamar about a collaboration between her and Babbuthepainter (artist Babneet Lakhesar, who’s also Qamar’s roommate) for a capsule collection. So she taught herself fashion design, just like she had taught herself how to paint, and how to make posters and silkscreen T-shirts. Qamar pulls a stretchy, neon-coloured neoprene skirt from a stack of clothes on the bed-couch: the Rainbow Scuba Circle Death Stare Skirt.

“It’s beautiful, right?” One vestige of her goth youth is that she usually wears only black, but Qamar has been trying colour lately. “When I dress in more colour, I feel like I’m giving a giant middle finger to the world. Kind of going: I’m here.”

Qamar’s clothes appear to be a direct response to the earnest “namaste” yoga crowd and fetishizing white girls roaming around Coachella in sari tops. While her designs might riff on the shocking colour schemes of Bollywood wear, they’re not nostalgic. With stark graphics steeped in humour, they feel neither ­Canadian nor South Asian, but instead almost futuristic, visiting from some other, better place. At her exhibition on Ossington last year, Qamar approached a white girl wearing a bindi dot on her forehead. “I was like, ‘You can’t come in this gallery full of brown people and wear our culture as your costume.’ ”

That’s a pretty clean case of cultural appropriation, but what happens when white people wear her designs, covered in South Asian faces and inside jokes, inserting themselves into a conversation between desis? She rubs her hand lovingly across the skirt she’s created, and says: “You can wear whatever the hell you want.” 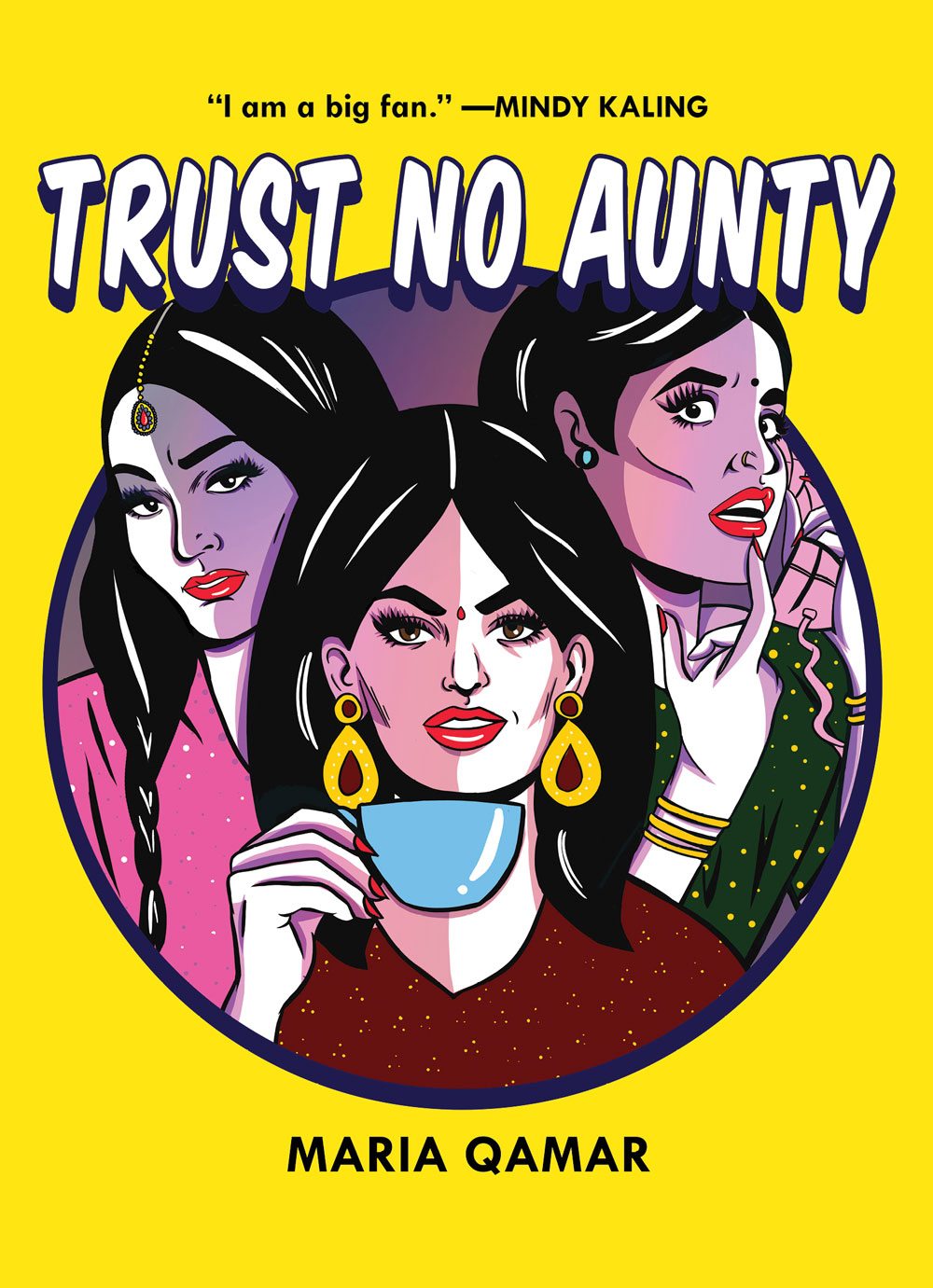 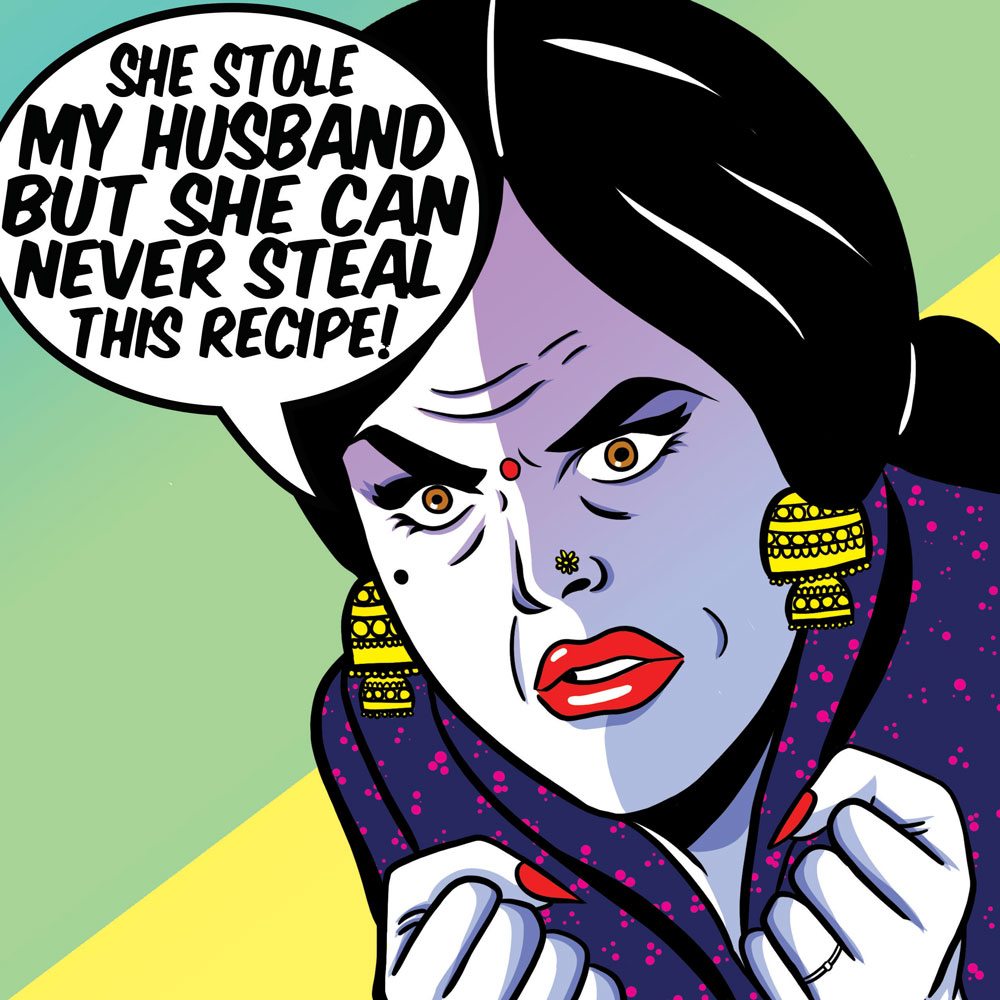 But there’s more than one answer to the question: “If you feel nervous about wearing a thing because you think it might be culturally appropriating something,” she says, “you probably shouldn’t take that chance.”