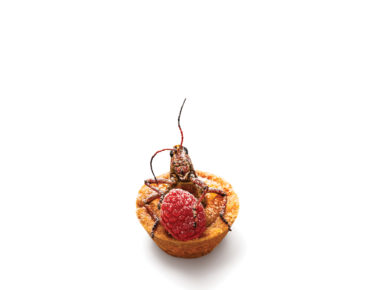 The Future of Food

If we want to save the planet, we’re going to have to eat some pretty weird stuff. A gourmet’s guide to sustainable dining

Consider the banana. When they go extinct, kaput, vamoose, maybe that’s when we’ll finally realize we’ve wrecked things. Even though we regularly hear about freak floods and heat waves and climate refugees, even though the evidence of a profound change is everywhere around us, we still cross fingers, hope it’s all just a wobble in the Earth’s rotation, and get on with the daily grind. But what will happen when we lose something so basic to our diets? What will we do when our 49-cents-a-pound bananas spike to $5 per banana or higher? That’s coming soon, certainly in our lifetime. Climate change has exacerbated the spread of black sigatoka, a fungus first spotted in Fiji in the ’60s, which thrives in hotter and wetter conditions and is killing off the world’s bananas—a fruit already made vulnerable when we reduced them to a bland monoculture crop.

No more banana bread, banana pudding, banana splits or banana cream pie. I’m not sure how I’ll cope without banana smoothies. And that’s just the gut-wrenching start. Experts say we’ll also bid farewell to chocolate, coffee, many varieties of nuts, avocados and even maple syrup. The maple tree has long grown like a weed in this part of the world, but wildly unpredictable springs have messed up their internal sap clocks, and researchers predict that in a few decades, the trees will be unable to adapt to hotter and drier summers and will go extinct. We’ll need a new national pancake topping as well as a new flag.

Food rationing isn’t anything new. As a blundering species, we’ve managed to survive shortages brought on by nature and by us. The much-revered American food writer M.F.K. Fisher released How to Cook a Wolf in 1942, written for housewives coping with hunger brought on by wartime ration cards. She says there’s something noble in finding creative solutions to having nothing, but warns against monotony. And if all else fails, “have a good drink before dinner.”

These apocalyptic predictions seem especially unfair today, when our food supply is more diverse—and sophisticated—than ever before. As a child in 1970s Canada, my diet consisted almost exclusively of Life cereal, cans of SpaghettiOs and Twinkies. Now I’m a parent of a preschooler who’s bored if we serve him Korean barbecue more than once a month. When the server at our local pub asks if he wants shaved truffle on his fries, he shrugs a “Sure, why not.”

How did that happen? How did we arrive at a time when the average No Frills carries a dozen types of lettuce and New Zealand spring lamb chops? (And how is it always spring there?) Globalization, and the resulting web of economies, is one big reason. So is the great advantage of living in this exceptionally diverse city. But I worry every time I contemplate that wall of lettuce, that our appetites will be our undoing. Our hunger for new foods—for having our vegetables available to us year-round, for flying them in from countries that are burning their rainforests to meet our demand—is also to blame for melting glaciers and drowning polar bears. Guilt about the environmental cost of our ravenous diets was what inspired the 100-mile diet and the Slow Food movement. Both have been criticized for their exclusivity—only the wealthy can afford a purely locavore, non-freezer-bagged food supply. But at the rate we’re going, with our disappearing crops, the fears of peak oil, tariff wars and massive migrations of displaced people fleeing droughts and other climate disasters, we all need to anticipate what a banana-less life will mean.

Some solutions are easy. I’ve stopped buying (so much) out-of-season produce. I also put away preserves and canned tomatoes for the winter. (The canning fad of the past couple of years is paying off.) I keep a list of stores that stock local products and avoid restaurants that don’t serve Ocean Wise fish. But the harder work is being done by food technologists and researchers, and by start-ups, many of them in the GTA, who are developing protein-rich products that imitate meat, crops that can adapt to whiplash weather patterns, and technologies that, if they work, can stop us from throwing away what food supplies we have (one UN report estimates that 30 per cent of food is wasted).

We have to figure it out, and quick. Rising temperatures are expected to decimate many wine regions—production could drop 85 per cent in the next 50 years. So much for that good drink before dinner. —Mark Pupo

The Future of Food

Part 1: These farming revolutions are changing the way we grow food
Local start-ups are using drones, AI and even vodka to change the future of agriculture

Part 2: The frozen food aisle is full of credible mock meats
Grocery stores suddenly have faux burgers and meatballs galore. We asked our chief food critic, Mark Pupo, to taste-test some of the Canadian-made options

Part 3: Salted crickets are the new roasted peanuts
Every week, Entomo Farms harvests millions of crickets, all destined for the dinner table

Part 4: Dairy-free cheese is delicious
Stokes’s Vegan Cheese is stinky and sharp in all the right ways

Part 5: Fake meat doesn’t have to cost a fortune
A U of T lab is figuring out how to make animal-free meat affordable for everyone

Part 6: This woman wants to make chickenless eggs and cowless milk
The cellular scientist Isha Datar on how scientists will conjure real animal products without any animals

Part 7: This guy is inventing a pulled pork sandwich—hold the pork
Adrian Pascu, also known as the Alternative Butcher, is creating an organic pork alternative to compete with Beyond Meat

Part 8: Toronto chefs are embracing the gourmet bug craze
Here’s where to find ants, crickets and mealworms on the menu

Part 9: this grocery store is a one-stop shop for sustainable dining
The Good Rebel is the city’s first all-vegan supermarket