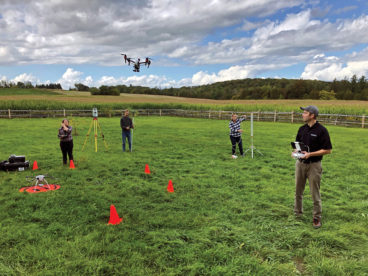 The problem: Climate change exacerbates soil erosion, which costs Canada $3 billion per year.
The solution: Using high-resolution imagery from drones that fly over Ontario fields, University of Waterloo professor Derek Robinson and his students build three-dimensional landscape models that show soil erosion over time. Robinson compares that data with his own models of farming activities, so he can play with various decisions—tilling in another direction; moving berms around—to determine the best ways to slow erosion and keep nutrients in the soil, instead of in our waterways.

The problem: Half the world depends on rice as a daily staple. But the crop is vulnerable to rising temperatures.
The solution: U of T professor Tammy Sage, working with the C4 Rice Consortium, is tinkering with photosynthesis to turbocharge the enzyme that converts carbon dioxide into the ingredients plants need to grow. This process—known as C4 photosynthesis—can reduce photorespiration, encourage production and make the rice more tolerant to drought.

The problem: The planet has lost some 40 per cent of its arable land over the past few decades, and we’re rapidly depleting the rest.
The solution: The farmers at We the Roots grow leafy greens for chefs like O&B’s Anthony Walsh in a hydroponic, automated vertical farm just off the DVP, using less space to cultivate more food year round. They’re boosted by some out-of-this-world technology from the University of Guelph, where researchers are developing plants that can thrive in hostile environments like Mars. The trick is tailored LED light combinations: scientists can tweak the lights’ colour and intensity to alter the nutrients, growth and even flavour profile of arugula, chicory and kale.

The problem: Butter, cream and cheese are in high demand in Ontario, but their production leaves behind a sugary liquid called milk permeate that’s just thrown away.
The solution: Dairy Distillery in Almonte is the only outfit in the world producing spirits with milk permeate, and they’ve developed a strain of yeast that ferments the lactose to create a smooth vodka. Called (what else?) Vodkow, it’s currently available at the LCBO in an old-timey milk bottle.

The problem: Agriculture consumes some 80 per cent of ground and surface water.
The solution: Aquaponics uses 90 per cent less water than traditional farming. The shipping container start-up Ripple Farms houses dozens of tilapia, which fertilize racks of plants like pea shoots, kale and lettuce. It’s a water–saving, self-sustaining, fish poop–powered system, where the greens are harvested each week for local restaurants like Montgomery’s and the Seneca cafeteria.

The problem: Twenty per cent of the world’s plant species are currently at risk of extinction.
The solution: Plant agriculture professor Praveen Saxena and his team at Guelph’s Gosling Research Institute for Plant Preservation built a sub-zero safety deposit box, freezing medically valuable plants like ginseng, goldenseal and American elm in liquid nitrogen for future propagation. To celebrate Canada’s sesquicentennial, the researchers transplanted 300 endangered Hill’s thistles from their cryobank to the Bruce Peninsula, and last year, the plants started to flower—a full four years ahead of schedule.

The problem: Unpredictable weather is a headache for farmers, who can no longer base decisions about pesticides, nutrients and water on past trends in the field.
The solution: The start-up Ukko Agro uses digital sensors to collect field data every 15 minutes, then runs it through machine-learning algorithms to predict risks three days in advance. It feeds that information straight to farmers, who this year cut their pesticide usage by more than 30 per cent as a result of the intel.

The problem: Store-bought produce is often filled with pesticides and pollutants.
The solution: The at-home hydroponic system from Just Vertical takes up two square feet and looks like a mid-century-modern credenza. It can grow up to 16 plants at once—including hot peppers, cherry tomatoes, strawberries and goji berries—using 95 per cent less water than conventional gardening. Ten pounds of food every month? Not bad for a piece of furniture.

The problem: The production of livestock feed is a major drain on our resources, using 60 per cent of our corn and 80 per cent of our barley (not to mention the land required to grow it).
The solution: Black soldier flies are the real superfood. The Markham-based company Oreka Solutions turns these insects into a feed that it says helps plants grow faster, makes fish more productive, and makes livestock better at resisting disease.

The problem: In many countries, buildings consume up to 40 per cent of primary energy.
The solution: Net-zero buildings produce as much energy as they consume. In the next few years, U of T Scarborough and Centennial College will bring that balance to the EaRTH District, a clean-tech research hub. The centrepiece will be a vertical farm and living lab, allowing students to get hands-on with water-conservation systems, food-scarcity solutions and sustainable building design.