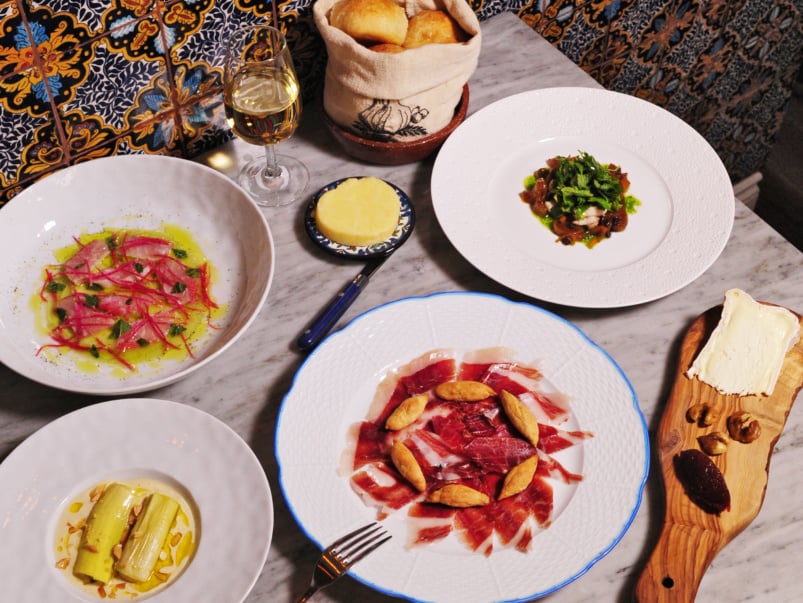 The 20 best reasons to brunch in Toronto right now 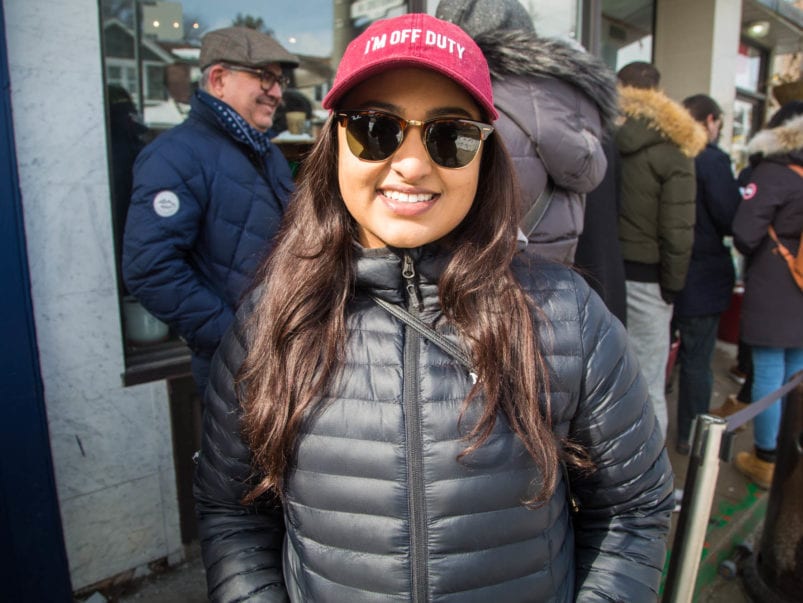 In 1895 England, brunch—the egg-focused mid-morning meal—was born. It’s said to have started as a Sunday tradition meant for “Saturday night carousers” to nurse their hangovers. By the 1930s, brunch had taken off in North America, and is now much more than just bacon, eggs and a boozy beverage. In Toronto, you can take a tour of brunch offerings from just about every continent. Here, 13 international brunch plates worth lining up for. 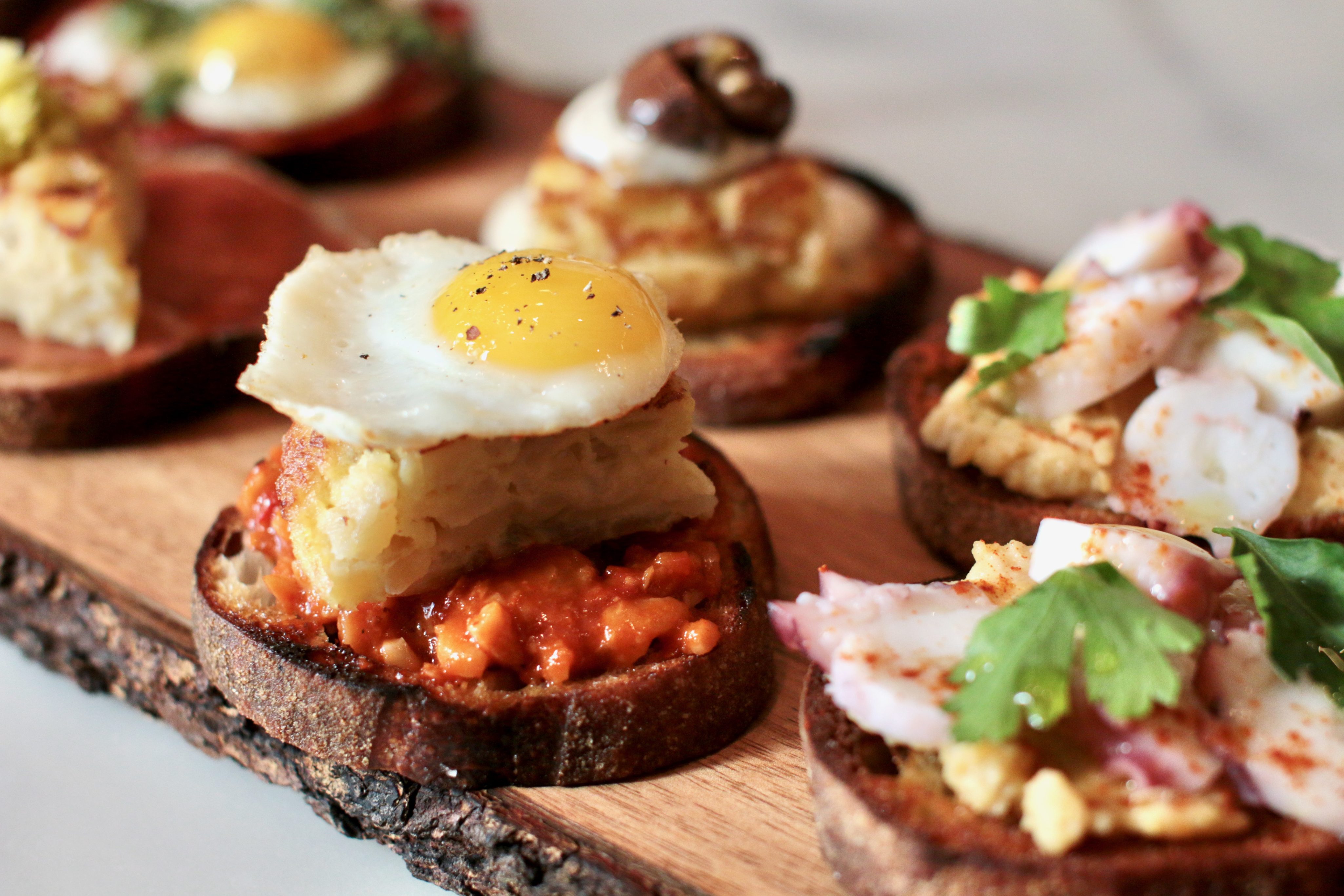 Two words: sangria cart. Patria’s Basque brunch starts with red or white sangria loaded with fruit. Diners are given dim sum–style paper menus and pencils to check off their choice of $4 pintxos, including toonie-sized tortillas topped with romesco and quail eggs. The pintxos are intended as a warm-up for larger brunch plates like huevos con morcilla, which marries blood sausage with a fried duck egg, apple slices and grilled bread. 478 King St. W., 416-367-0505, patriatoronto.com 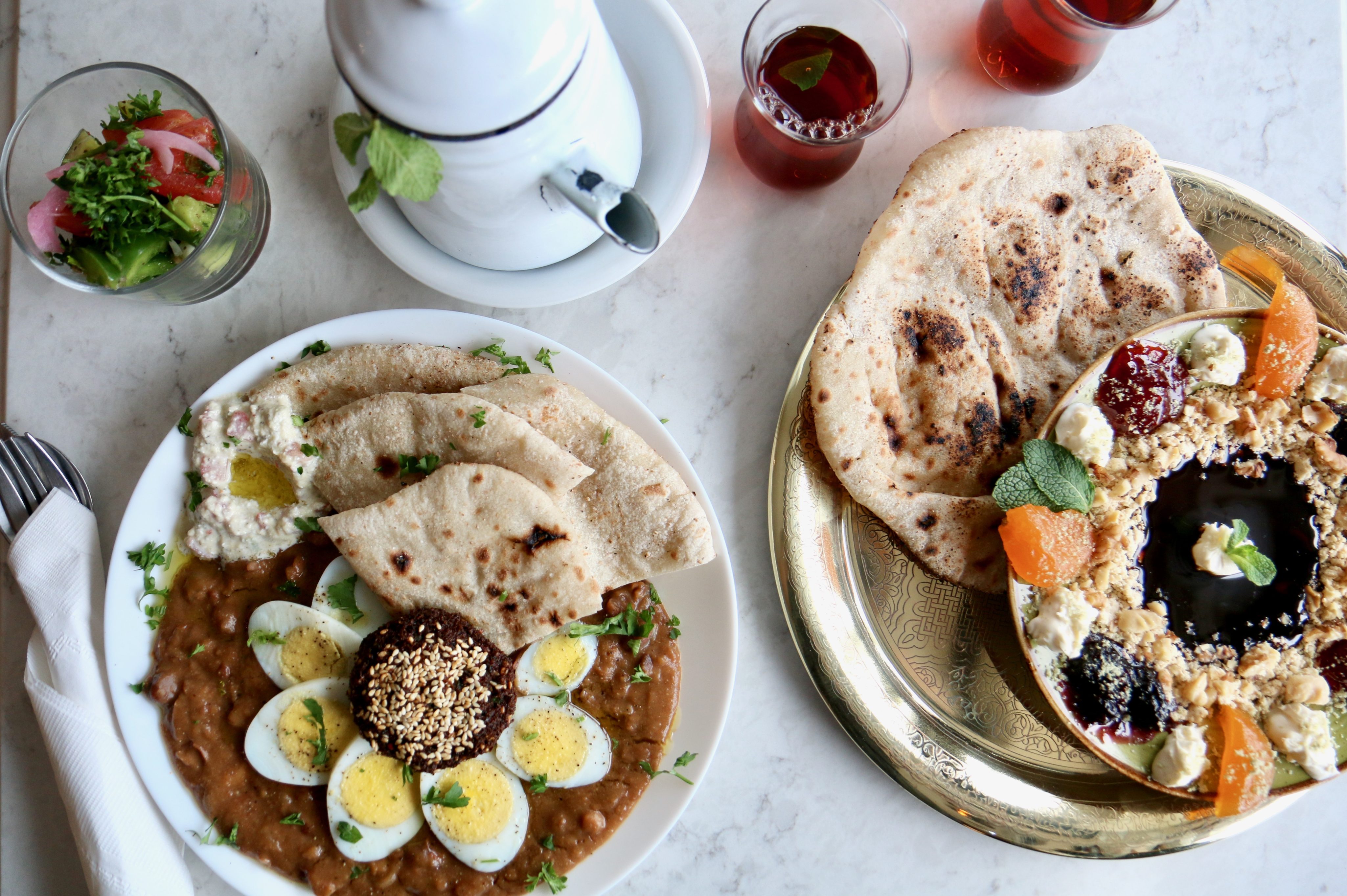 This east-end favourite may have doubled in size last summer, but the queue outside is still a fixture. People are just bonkers for chef-owner Maha Barsoom’s Egyptian brunch. The Cairo Classic might sound simple: spiced fava bean stew, falafel, slices of boiled egg and flat bread, but it’s packed with punchy flavours. Lemon and cumin electrify the stew, while the falafel gets its green hue and herbaceousness from parsley and coriander. For something off the beaten-egg path, there’s sakalance. The plate looks like it’s laden with gems, but each colourful dollop is a different fruit: mulberries, peaches, strawberries. Drops of clotted cream, a crumble of Egyptian halawa and a pool of sugarcane molasses complete the plate. 226 Greenwood Ave., 416-462-2703, mahasbrunch.com 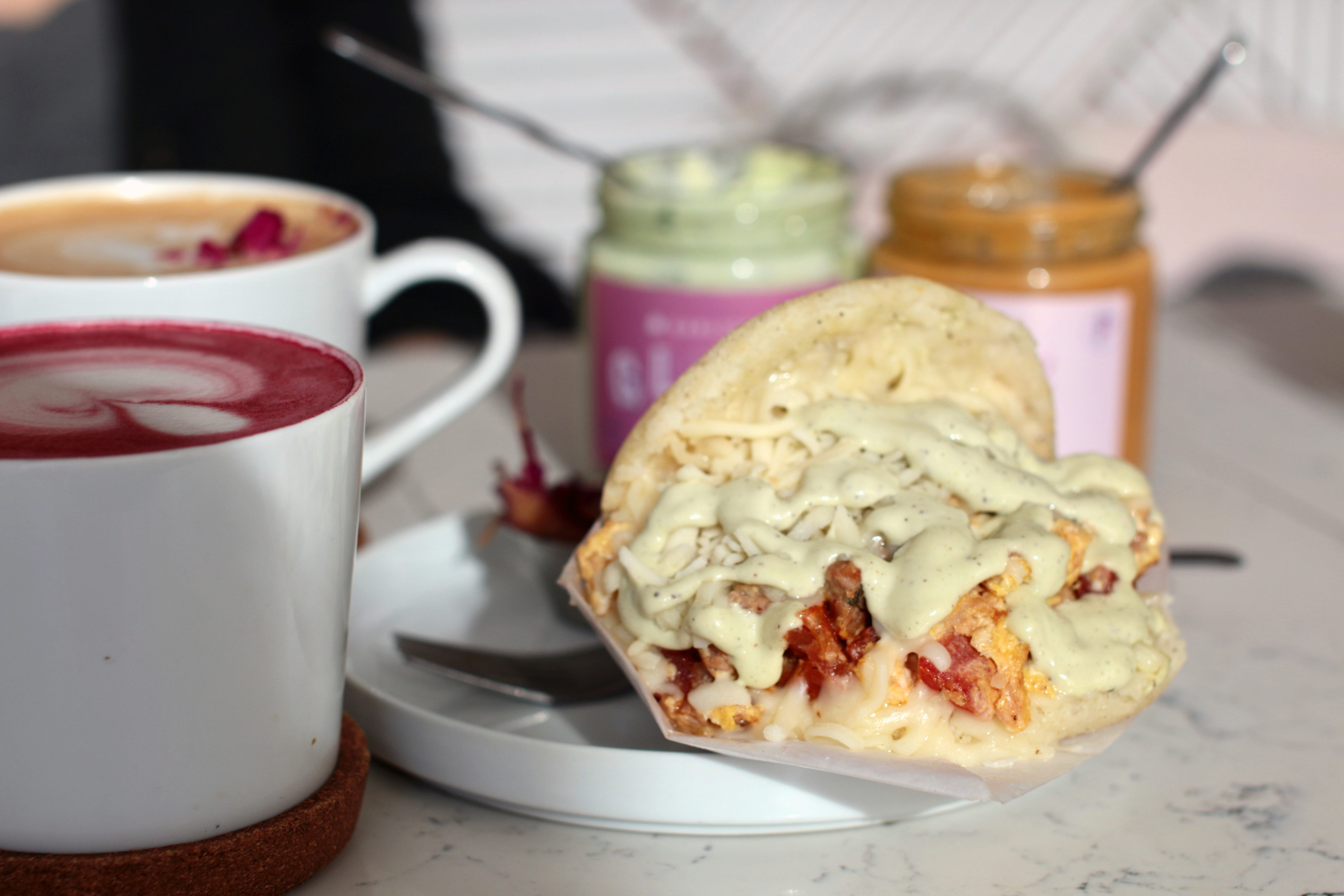 At his sunny Danforth café, Luis Hernandez serves up the food he grew up eating in San Cristobal—alongside a trendy selection of healthy smoothies and colourful lattes. Everything is made in-house down to the arepas and three-chili hot sauce. The arepas are baked daily and stuffed to bursting with all kinds of tasty fillings. The breakfast arepa is piled high with scrambled eggs, chorizo, queso fresco and a squiggle of avocado mayo. Note: Pomarosa’s launching a full South American brunch starting in March. 1504 Danforth Ave., 416-462-2945, pomarosa.ca

Chef Rob Gentile’s all about esoteric pastas, hard-to-source ingredients and long-forgotten recipes from lesser-known Italian regions. Even his brunch plates incorporate duck eggs and offal. Gentile’s crespelle, though, are pure nostalgia—his nonna used to make them for him. There’s nothing overly complicated about the olive oil–fried semolina pancakes, but the crispy-yet-fluffy stacks are a textural delight. The toppings on the Italian flapjacks often change—one time it may be a cannoli-inspired stack topped with mascarpone and a maple-grappa syrup, the next it’s wild blueberries and whipped ricotta. 75 Portland St., 416-599-2822, buca.ca/bar; and 101 Eglinton Ave. E., 416-599-2822, buca.ca/bareglinton 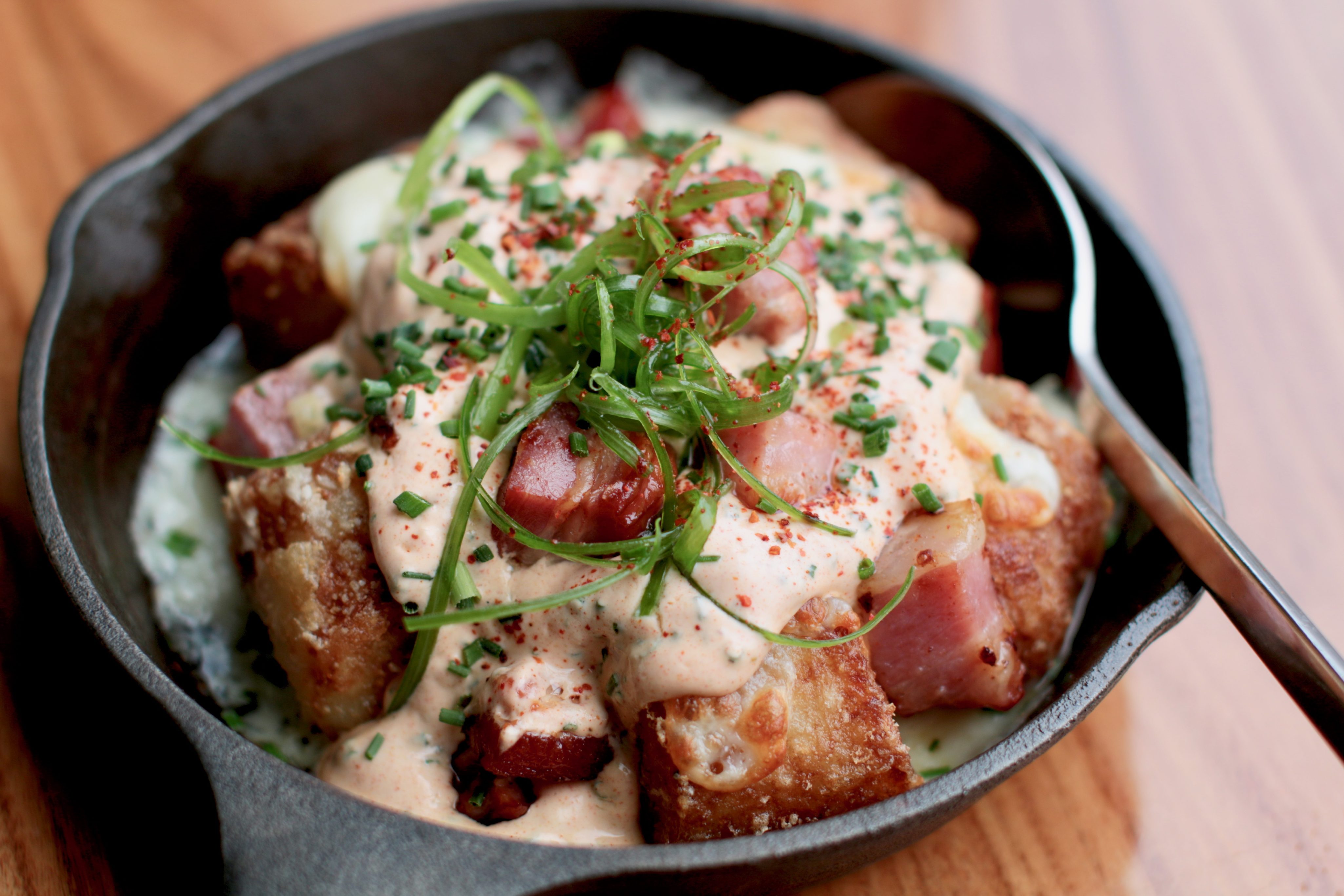 Nothing quite says America like conspicuous consumption, and Yorkville steakhouse STK is all about indulgence. There’s an entire section of their menu called “For the ’Gram” (think $275 caviar platters) and even the restaurant’s more casual brunch plates, like a $49 lobster-loaded eggs Benny, appeal to the one per cent club. But for celebratory occasions, STK’s $30 free-flowing bubbly makes for a pretty decent—though still decadent—deal. Of all the many fancy things on offer at STK, their humble tater tots steal the show. The golden, deep-fried morsels of mashed russet potatoes come drowned in a chipotle-seasoned sour cream, and hunks of gorgeously marbled pork belly make this skillet a home run. 153 Yorkville Ave., 416-613-9660, stksteakhouse.com 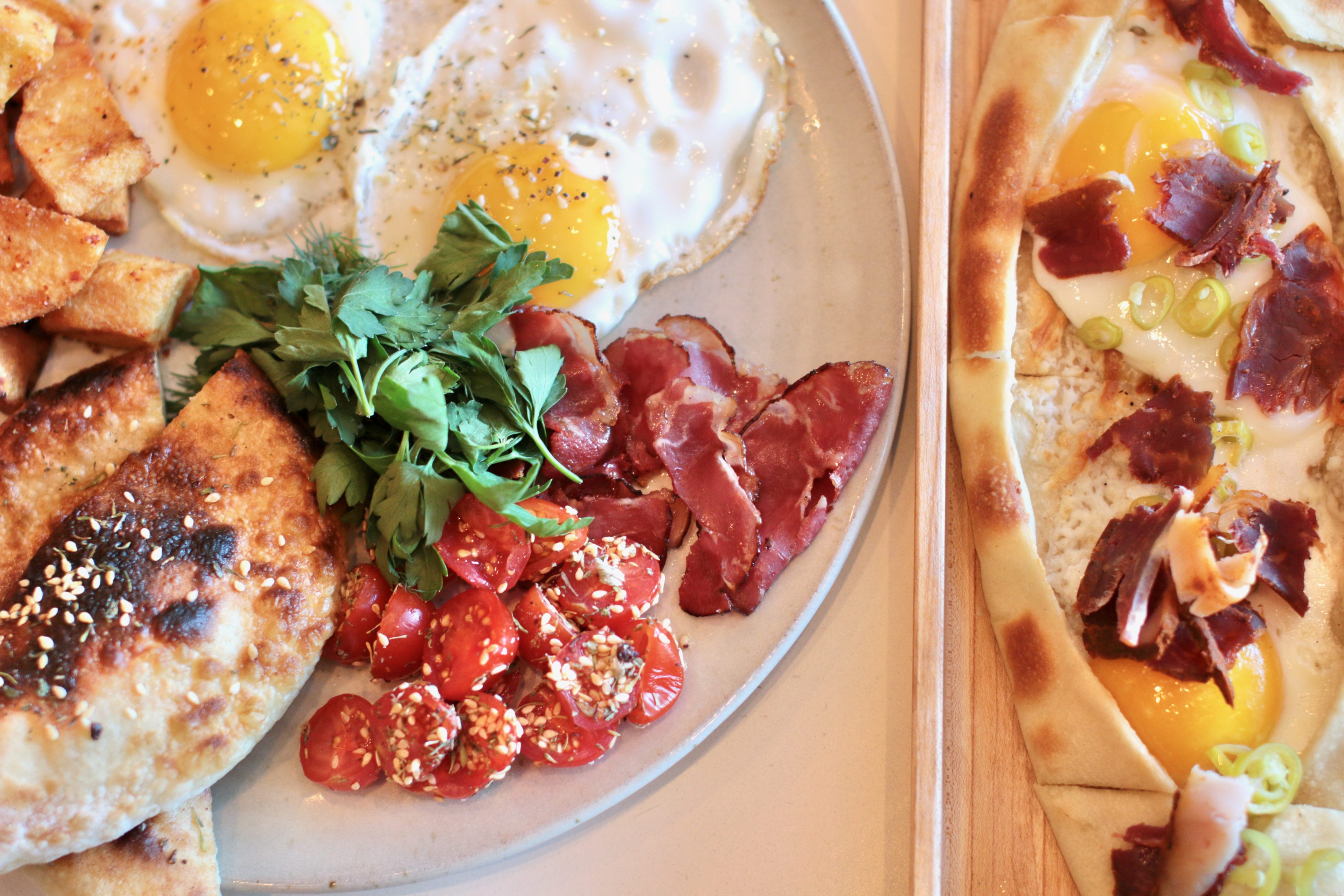 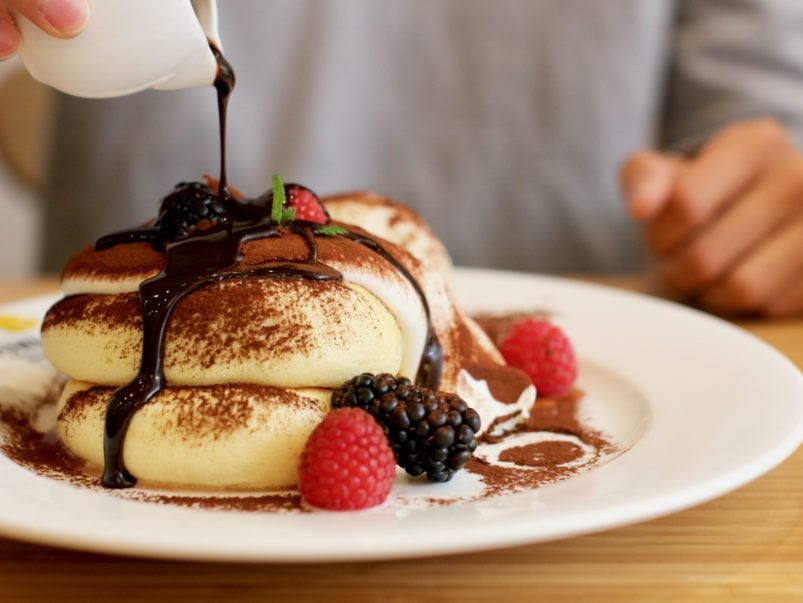 In Japan, soufflé pancakes are a dessert item—often served at weddings. In Toronto, you’ll see long brunch lineups for FuwaFuwa’s jiggly flapjack stacks. At this Annex spot, the concise menu is built around nine different pancake permutations—the most popular is a tiramisu version topped with coffee syrup and mascarpone. The base pancake is never toyed with, though, and it’s a simple mix of whipped egg whites combined with yolk, sugar, milk and flour. The hotcakes are so delicate they start to fall within three minutes, so skip the photo op and just dig in. 408 Bloor St. W., 647-618-2868, fuwafuwapancakes.com

King West’s new French bistro Lapinou is helmed by a 100-kilometre zealot. Everything chef Jamie Ullrich uses—right down to the flour—comes from small Ontario farms. Ullrich is so fanatical about sourcing good local products that he’s willing to drive an hour to pick up the cream for his house-churned butter (his preferred farm is too small to deliver). The brunch program at Lapinou veers towards heartier fare like a plate of decadent house-made ham topped with a truffle-celery remoulade. 642 King St. W., 416-479-4414, lapinoubistro.com

The brunch menu at Leña isn’t beholden to any particular geography—there are Spanish tortillas and French omelettes—but the highlight of the mid-morning meal is the selection the Argentinian plates like this a plate of chimichurri-topped poached eggs served with fabulously delicate beef empanadas. Instead of a full English breakfast, chef Julie Marteleira serves up the Full Gaucho, her take on the belly-busting morning spread that comes with herb-fried eggs, blood sausage, pork shoulder bacon, mushrooms and pan-fried russet potatoes. 176 Yonge St., 416-507-3378, lenarestaurante.com 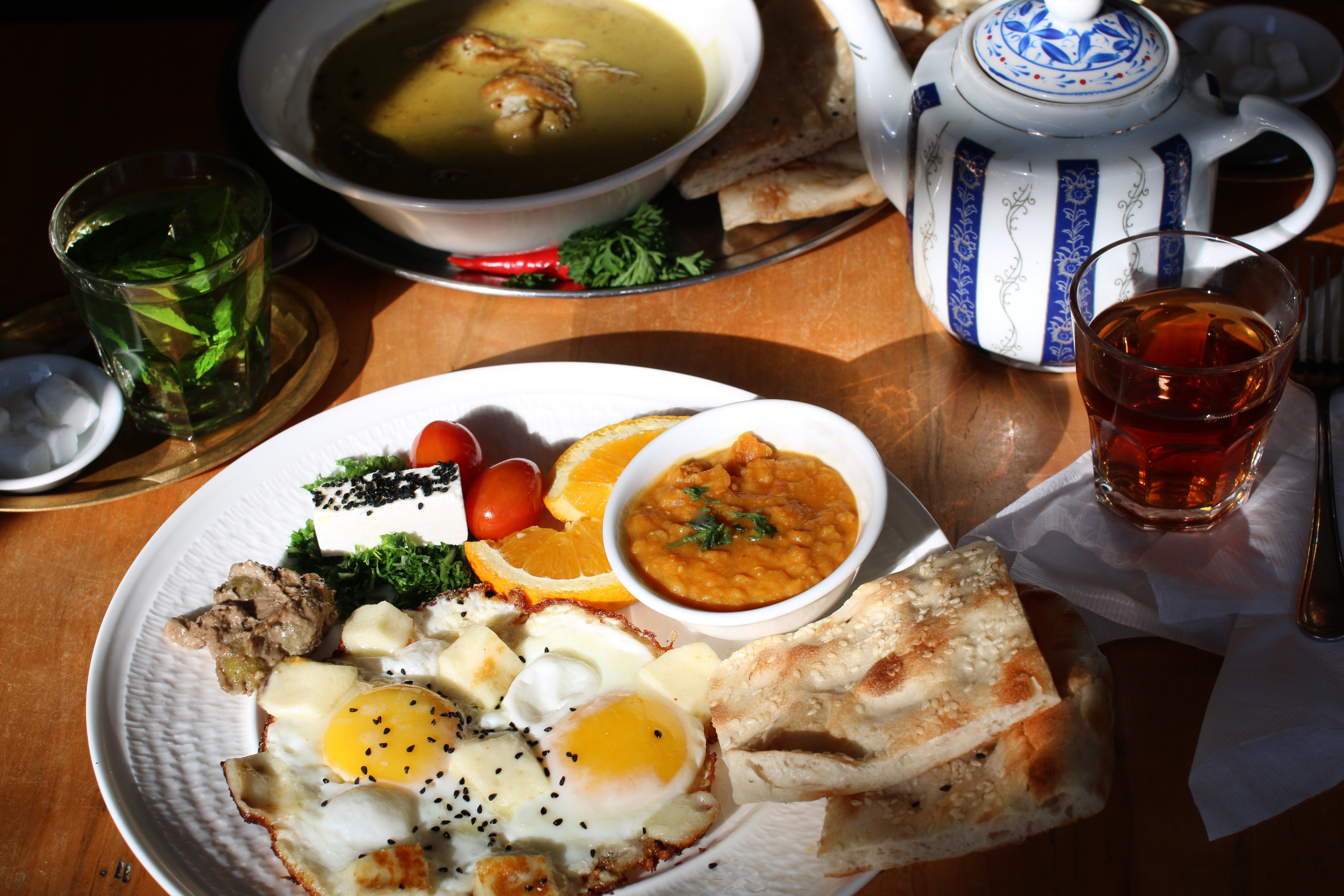 Famed food writer Ruth Reichl raved about the kaleh pacheh at this west end Persian brunch spot. The delicate lamb soup (served with a hoof, tongue—and an eye if you’re lucky) left the critic so satisfied, she said that she floated out of the restaurant. If that bowl is too adventurous, the restaurant also does great stuff with eggs. For the paneer boroshteh, the kitchen cooks hunks of halloumi right into the whites of two sunny-side-up hen’s eggs. An order comes with a slab of ultra-creamy feta, marinated olives, chopped herbs and warmed slices of Persian flatbread. 1120 College St., 647-352-7322, pomegranaterestaurant.ca/tavoos

Anthony Rose’s new Mexican joint has recently started slinging weekend brunch. Over-the-top offerings include a carnitas-and-poblano pepper hash and fully loaded breakfast nachos. Even the seemingly tame plates like the breakfast burrito will have you reaching for the Lipitor. For the burrito, the kitchen stuffs a flour tortilla with scrambled eggs, chorizo, potatoes, beans, charred poblano peppers and cheese. The savoury package is sealed and seared, then topped with guac, pico de gallo and crema. 224 Ossington Ave., 647-350-4400, gordysmiles.com

Medianoche sandwiches are a late-night staple in Havana, and a brunch staple at La Cubana’s Roncesvalles outpost, where they slap a sunny-side-up egg on the traditional pork sandwiches. Other eggy plates include a chorizo hash and a chorizo empanada (pictured) served with black bean–studded rice and poached eggs. 392 Roncesvalles, 416-538-7500, lacubana.ca