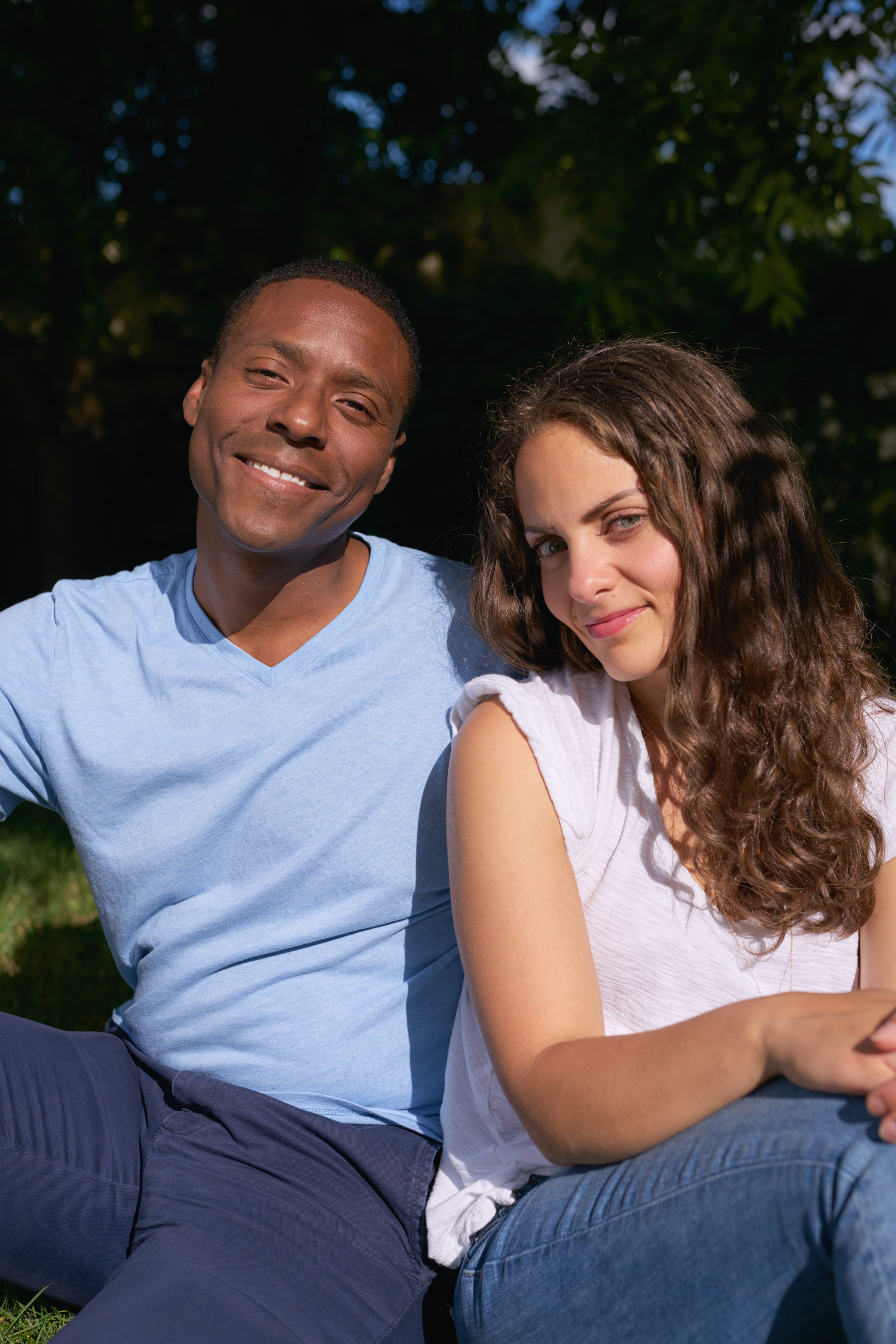 THE COUPLE: Jamie Hunte, 38, a sales manager at Scotiabank, and Myra Fahim, 31, a clinic manager at CAMH
THE BUILDING: DNA at King and Shaw

MYRA: I moved into the building in October 2011. Before that, I had been living at my parents’ place in Mississauga.
JAMIE: I had moved in a couple of months before. Our units weren’t close together at all. She was on the ninth floor and I was on the third floor.
MYRA: On opposite ends of the building.
JAMIE: We definitely wouldn’t have met in the elevator. At the time, I was driving back and forth to Pickering fairly often to be with family, because my mother had cancer. For the longest time, the parking space beside mine was vacant. One day, I was sitting in my car checking messages on my phone when I saw Myra’s car pull in. I waited for a little bit and she got out.
MYRA: That sounds really creepy, by the way.
JAMIE: She was taking some boxes out of her car, so I asked her if she needed a hand.
MYRA: It was nice to have some help. But I was just moving in, and I wasn’t ready to be social, so I didn’t let him stay with me past the elevator. I told my friends I had a cute parking neighbour.
JAMIE: I called her “hot parking lot girl.”
MYRA: Every time I went to the parking lot I would always look to see if he was there. A few months later, we ran into each other at Metro. I was buying tampons. I tried to hide them behind my back.
JAMIE: I asked for her number. We were both really busy at work, so we didn’t actually go on a date until a few weeks later.
MYRA: After that, we saw each other pretty regularly. It was easy, because we lived in the same building. We were able to see each other as much as we wanted but still be independent and have our own space.
JAMIE: One night, in her unit, I surprised her with a ring. In 2016, we sold both our condos, bought a house in Mississauga and got married. 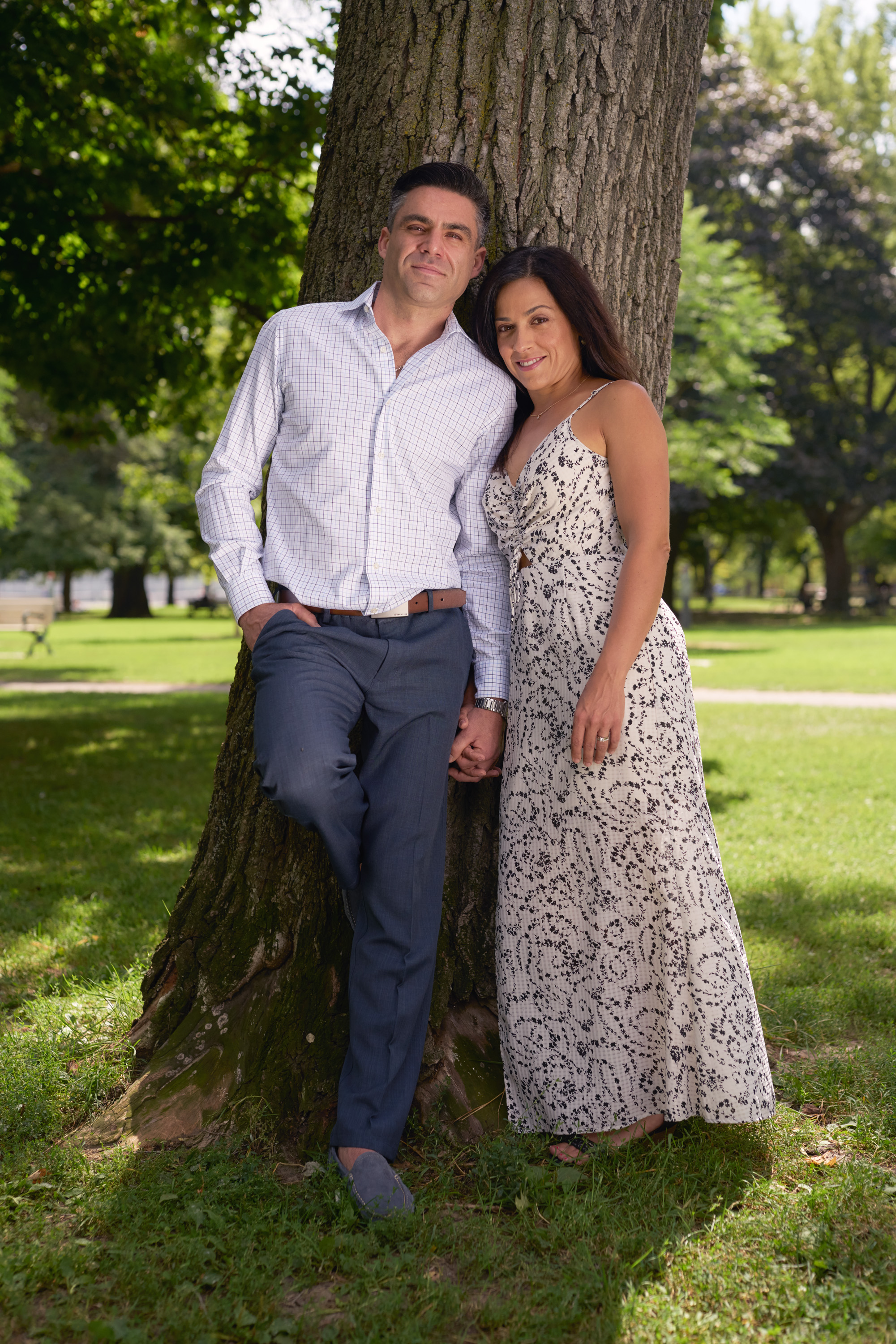 THE COUPLE: Mark Medeiros, 39, a carpenter, and Christina Medeiros, 42, a behavioural therapist
THE BUILDING: Nero Condos at Dundas and Manning

MARK: I worked on the construction of the building. I liked what I saw, so I bought a unit. In August 2016, the building was done and everyone moved in.
CHRISTINA: I was nervous, but I was determined to get to know my neighbours. I saw Mark at the elevator and I thought he was really cute.
MARK: I was renovating my unit, so I invited Christina in to see. I wasn’t trying to hit on her.
CHRISTINA: I was very taken by him right away.
MARK: I ran into her at a Portuguese chicken place across the street. I had a soup that I had made at home, and I brought her a bowl to go with the chicken.
CHRISTINA: And he still didn’t ask me out. I was going out of my way to run into him. I thought he must’ve had a girlfriend.
MARK: And then she tried one last time. She knocked on my door at like eight in the evening.
CHRISTINA: I said, “Do you have a tape measure I can use?”
MARK: I said, “I don’t have one, but I can get one from my truck for you if you want.”
CHRISTINA: I told him not to worry about it.
MARK: I didn’t sleep well that night. I woke up around 5:30 in the morning. I got a coffee and a croissant and a tape measure, and I left them in front of her suite in the morning, with a note that had my phone number on it.
CHRISTINA: I didn’t need a tape measure. We moved into his unit in November 2017 and we got married this past July. 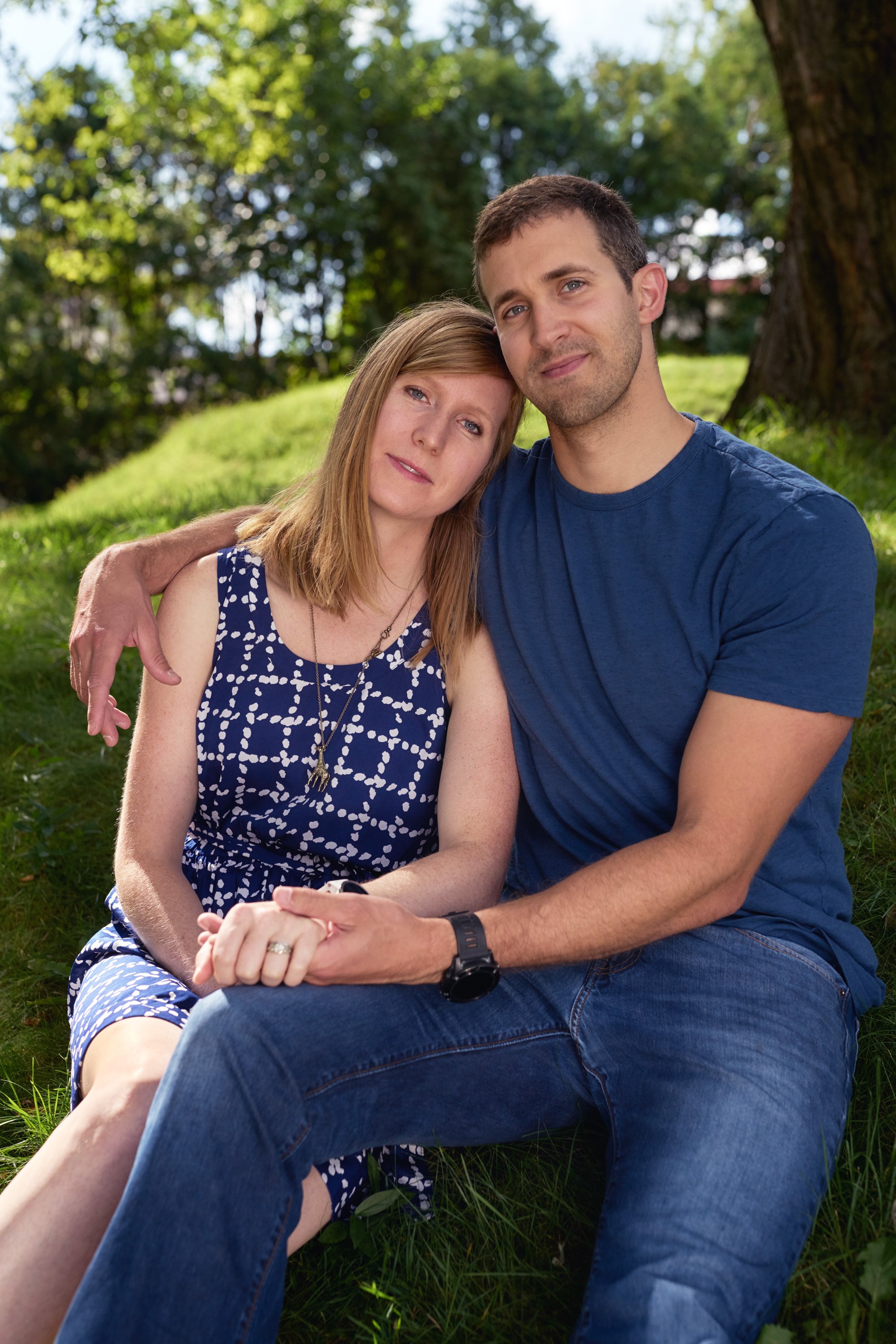 THE COUPLE: Alyson Burns, 32, a marketing professional, and Jon Burns, 31, a software engineer
THE BUILDING: Neptune Condos near Bathurst and Fort York

ALYSON: Jon and I met at a mutual friend’s housewarming party in 2012. At the end of the night, when we were all figuring out how to split cabs, Jon mentioned that he lived by the lake. It turned out we lived in the same building complex.
JON: I was pretty interested in Alyson the moment I saw her. There were sparks.
ALYSON: I was about to go travelling for two months. I was like, “I’m not going to start something right now.”
JON: The next morning, back at the building, I was walking my dog, Mika. I ran into Alyson’s roommate, Kelly, who I’d also met at the party. I was like, “Is Alyson single?”
ALYSON: Kelly was like, “Aly. The guy from the party. He has the most beautiful black Lab. You have to go out with him, even it’s just to hang out with the dog.”
JON: I messaged her on Facebook with an inside joke from the party and asked her out.
ALYSON: I joined Jon for a dog walk, and I realized that he was an incredible human being. We had a few more dog walks between my many trips. The commute to see each other was 30 seconds, so it was easy to spend time with Jon and Mika even when I was getting ready to leave.
JON: Two years later, Kelly moved in with her boyfriend, so I moved in with Aly.
ALYSON: I packed up my stuff so we could jointly decide where to put everything.
JON: I proposed on a canoe trip in 2017. 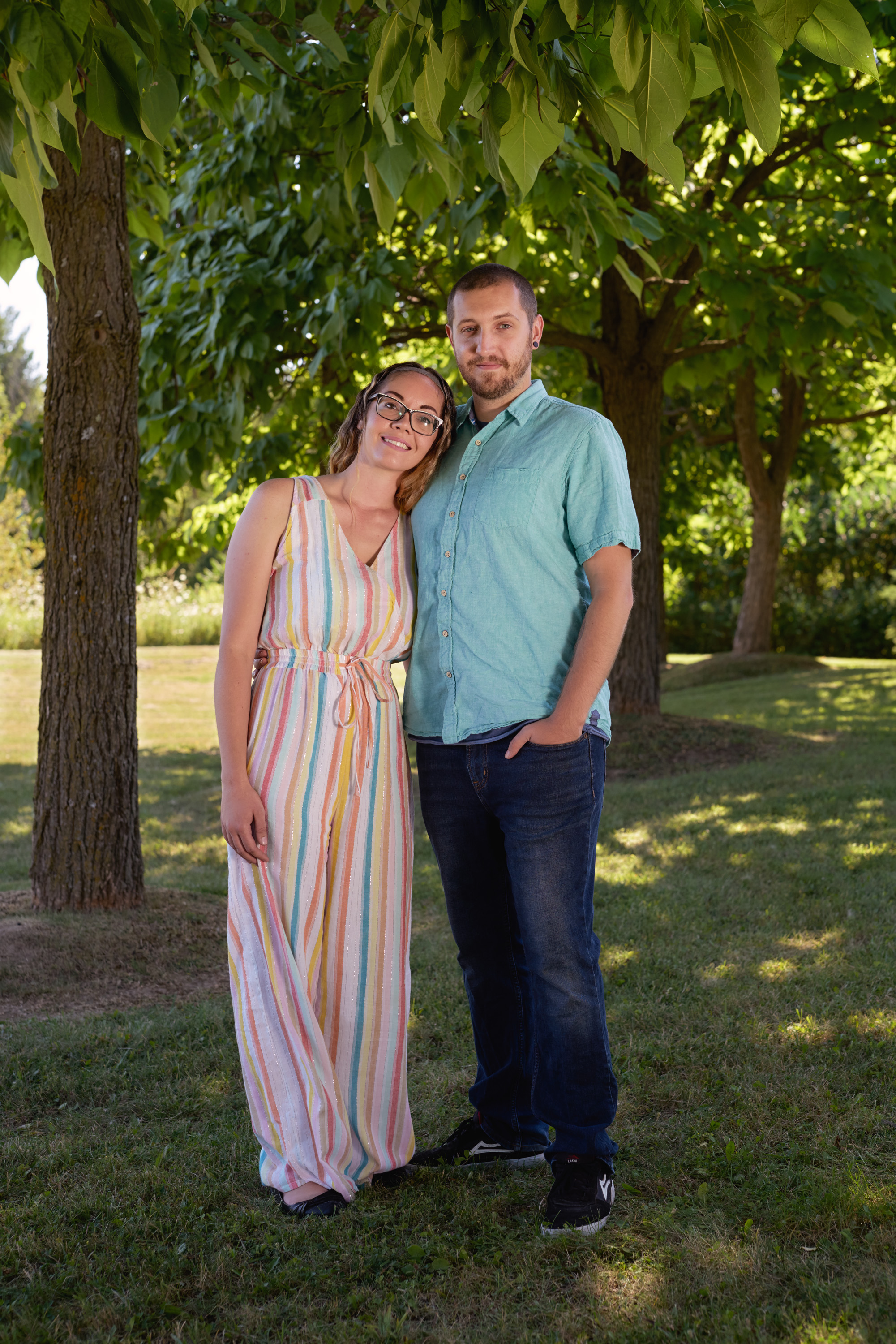 THE COUPLE: Jade Murphy, 30, a farmhand, and Cody McCaig, 32, a visual effects supervisor
THE BUILDING: Plaza Royale Condos near Sheppard and Dufferin

JADE: I moved into the building in 2012. I wanted to be close to York University, where I was studying geography.
CODY: I was starting a digital media arts program at Seneca. I rented the apartment across from hers.
JADE: I first saw him one day when I was doing my laundry. He was waiting for the elevator. When the doors opened, I picked up my basket and the handle broke off. All my laundry fell on the floor. He held the door open while I collected all my dirty clothes off the ground. And then he just left.
CODY: I didn’t want to leave, but it was an embarrassing moment and I thought she would want some space.
JADE: After I finished doing my laundry, I messaged my sister and told her I’d met a cute guy who lived in my building. She told me to write a note and put it on his door. So I did. It said, “Hey, 1604, this is 1602. (Laundry problem.)” And I gave him my number.
CODY: I was like, “This is kinda awesome.” But I didn’t want to seem desperate, so I texted her two days later. I was trying to play it cool.
JADE: We went out that night.
CODY: We knew right away that we were going to be together for a while.
JADE: Four years later, he proposed by the elevator, in the same spot where we met. We’re getting married in 2020.