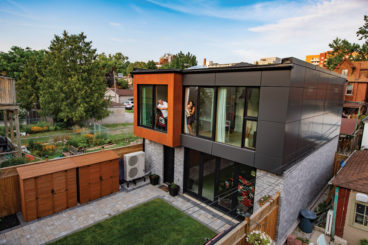 Stay in Your Lane

In a city grappling with a housing shortage, laneway suites make a lot of sense. For decades they’ve been a non-starter at city hall: too complicated, too costly, too much of a headache. Finally, they’re here, they’re legal and they’re glorious

Laneways have long been the urban grid’s doppelganger, the places where the dirty work got done, all coarseness and bustle. They were originally the location for coach houses and stables, horses and blacksmiths and farriers, plus housing for grooms and other workers. Later, they became sooty service routes for coal and wood delivery and cinder removal. Then, in the postwar era, they were rebuilt for cars and became eerily desolate hallways of garage doors. By the ’90s, graffiti began to proliferate. Much of it was spectacular, but it also symbolized the laneways’ abandonment.

Fast-forward to the 2020s, to a Toronto that’s squeezed for space in every direction. More and more people are commuting by bicycle, or not commuting at all. In the downtown wards that are home to many of the city’s laneway neighbourhoods, fewer than half of all households own a car. And house prices have skyrocketed faster than people’s incomes. Postwar laneways don’t make sense in this city anymore, so reinvention beckons. Housing is in such astronomical demand, and urban land so valuable, that the eye now sees backyards and garages through a far narrower aperture. They are no longer useful storage units or pleasant garden oases. They’re greyfields. Underdeveloped assets. Idle capital.

Toronto’s laneway-housing future has been obvious for years now. The city’s architects, the canaries in the urban coal mine, provided proof of concept for laneway housing by the late ’80s. City hall held back the future’s arrival with red tape, as it does, for about 30 years. In 2018, it finally passed a bylaw permitting the construction of laneway housing, and just like that, everyone’s a developer. Since the bylaw came into effect, 50 laneway suites (not “homes,” insists the bylaw, as they are considered an extension of the lot’s primary home) have been built and 131 more are under construction, while another 58 applications wend their way through the approvals process. On top of that are the dozens, if not hundreds, of future applicants currently consulting with architects and builders.

It can cost anywhere from $300,000 to $600,000 to build a suite, depending on your budget, your tastes and the function you have in mind for the structure. Regardless, it’s bound to pay for itself. The mortgage-inundated see rental income. The sandwich generation needs an alternative to long-term care. The new legion of work-from-homers are getting fed up with their makeshift dining room desk. Aging helicopter parents want their kids out of the house. But not too far.

Toronto’s laneways welcome them all. Laneway builds can cover a surprising breadth of social needs and generate lots of social benefits: sustainability, gentle density, support networks. The building-crane boom has left Toronto stuck in a house-or-condo binary state, when what’s needed is lots and lots of the many housing types that fall in between. And there’s 300 kilometres’ worth of underused streets to build them on.

Best of all, when individuals are the ones commissioning the blueprints, there’s bound to be more flair in the form. Many of the garage doors will remain, but they’ll be dressed up in style, and people will mill about on their new balconies. The bustle will return to the laneways, except it’ll be fabulous this time. The city of neighbourhoods is building neighbourhoods within neighbourhoods, one laneway suite at a time.

This package appears in the October 2021 issue of Toronto Life magazine. To subscribe for just $29.95 a year, click here.