Yuill McGregor built this laneway suite above his garage for $400,000. His daughter and her cousin live there, splitting the $3,000-a-month rent

Who: Cédrine Turbide, 25, a consultant
Where: Seaton Village
What: a 1,500-square-foot, two-bedroom laneway house

In 1991, Yuill McGregor and his wife, Sylvie Turbide, bought a two-bedroom, one-bathroom detached in Seaton Village. McGregor liked the property in part for its concrete-block laneway garage, which he used to store equipment and materials for his low-footprint home building company, North on Sixty.

About three decades later, his daughter, Cédrine, graduated from McGill University and moved back home to live with her parents. That’s around the time McGregor learned about the city’s laneway house program.

He worked with one of his industrial designers on the space. Together, they made a plan to keep most of the existing structure and add a second storey, while using recycled wood materials for the interior, all within a budget of $400,000. He thought the suite might be a good place for Cédrine to live, but if not, he could rent it out.

Construction began in October 2019, and a year later, Cédrine moved into the laneway house with her cousin, Nicole, splitting the $3,000 rent. Cédrine imagines herself living in the laneway house for the foreseeable future. She likes the proximity to Bathurst station. It’s also near the Royal Canadian Yacht Club’s City Clubhouse, where she plays squash and uses the gym. She loves the neighbourhood and going to restaurants on Bloor.

Cédrine and her parents are happy to have family so close by. “We see each other several days a week. Mom and I like to make dinner together, so I’ll bring my meal kit over and we’ll cook together on Sundays and go around the table to reflect on the week, share stories and just be together.”

In the main house, Cédrine worked from her bedroom. She now enjoys having her own comfortable, dedicated workspace on the second floor of the laneway house: 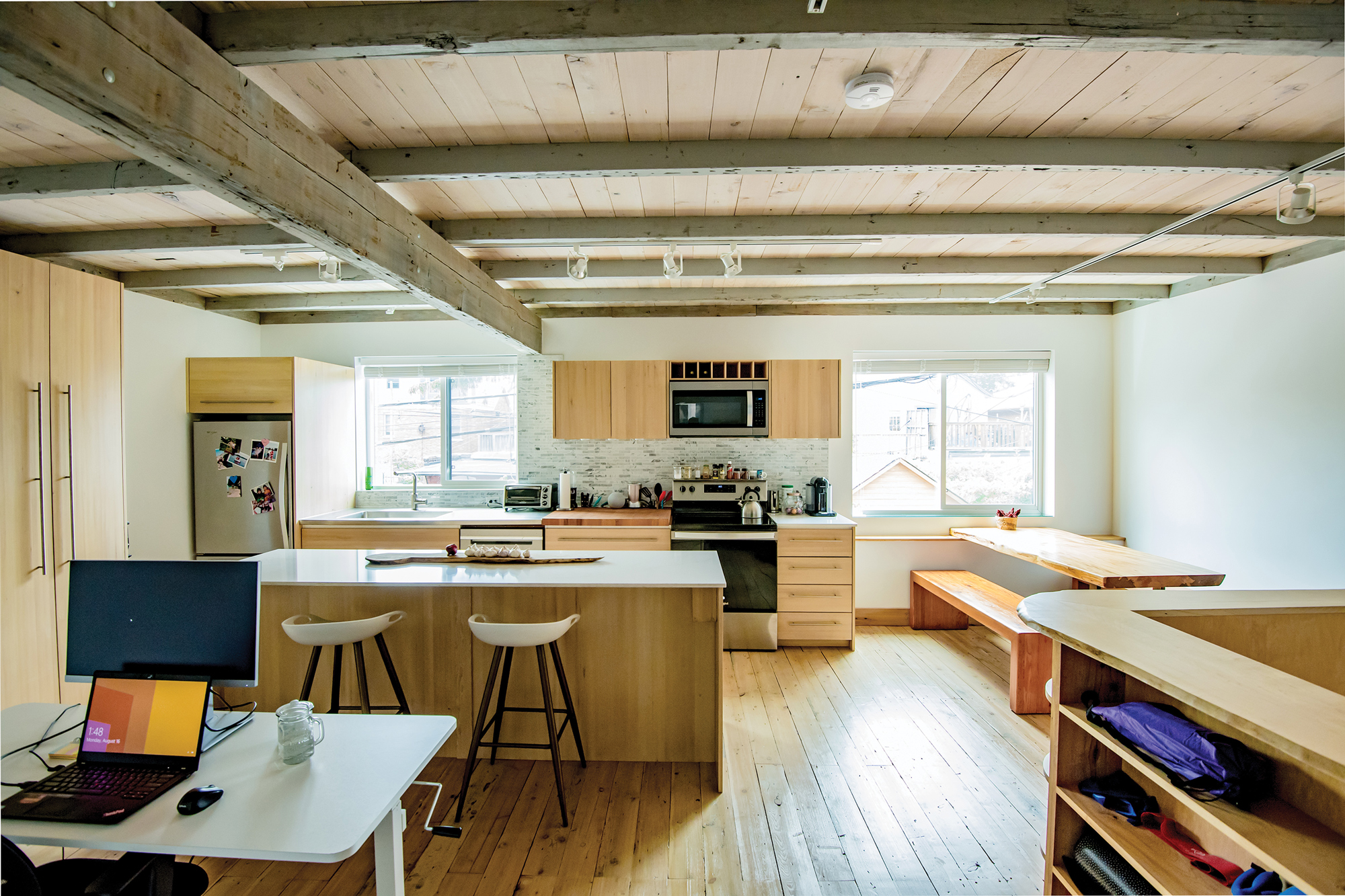 There’s a porcelain shower in the upstairs bathroom: 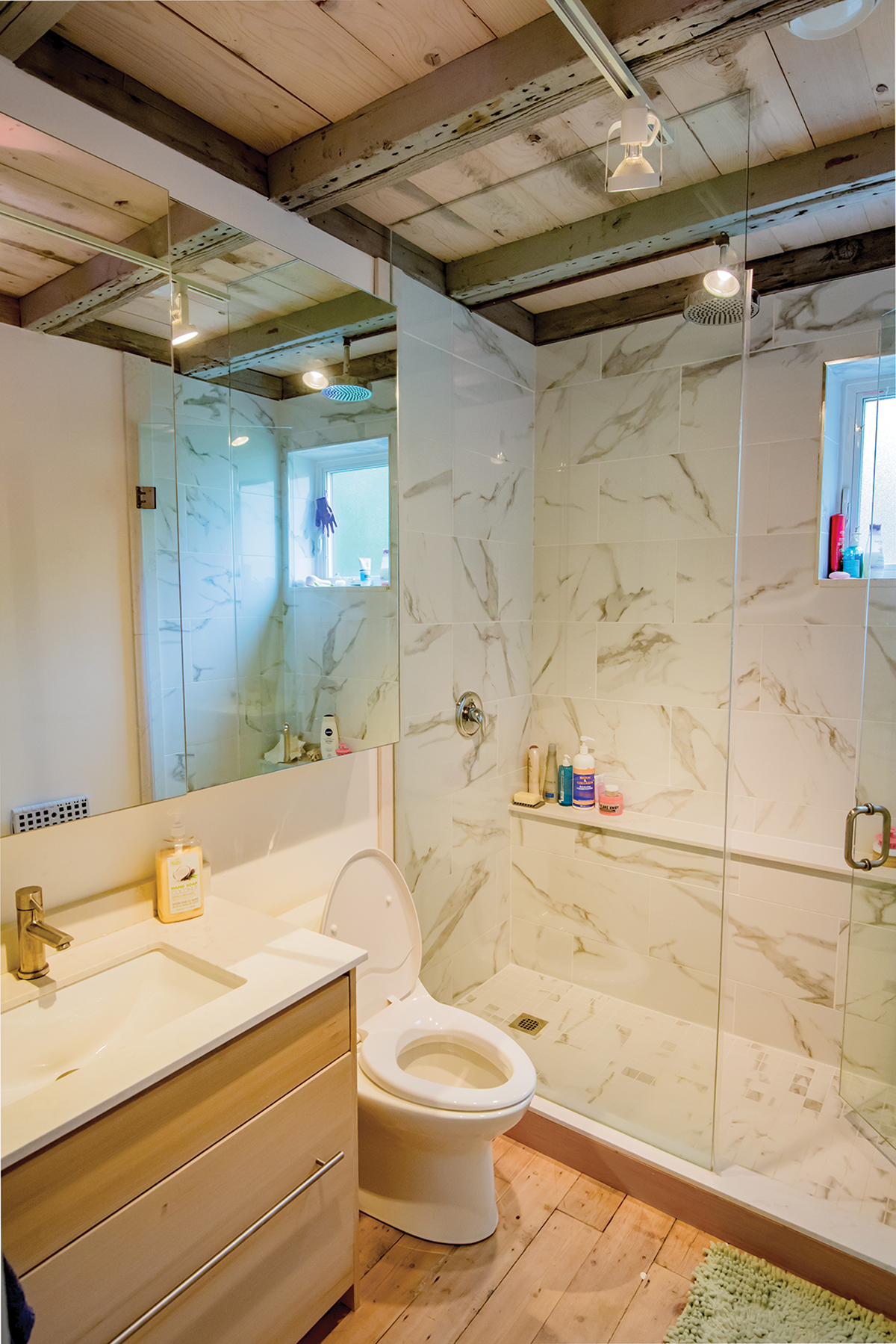 The floors on the lower level are polished concrete. McGregor salvaged the handrails from the renovation of his old high school, North Toronto Collegiate Institute: 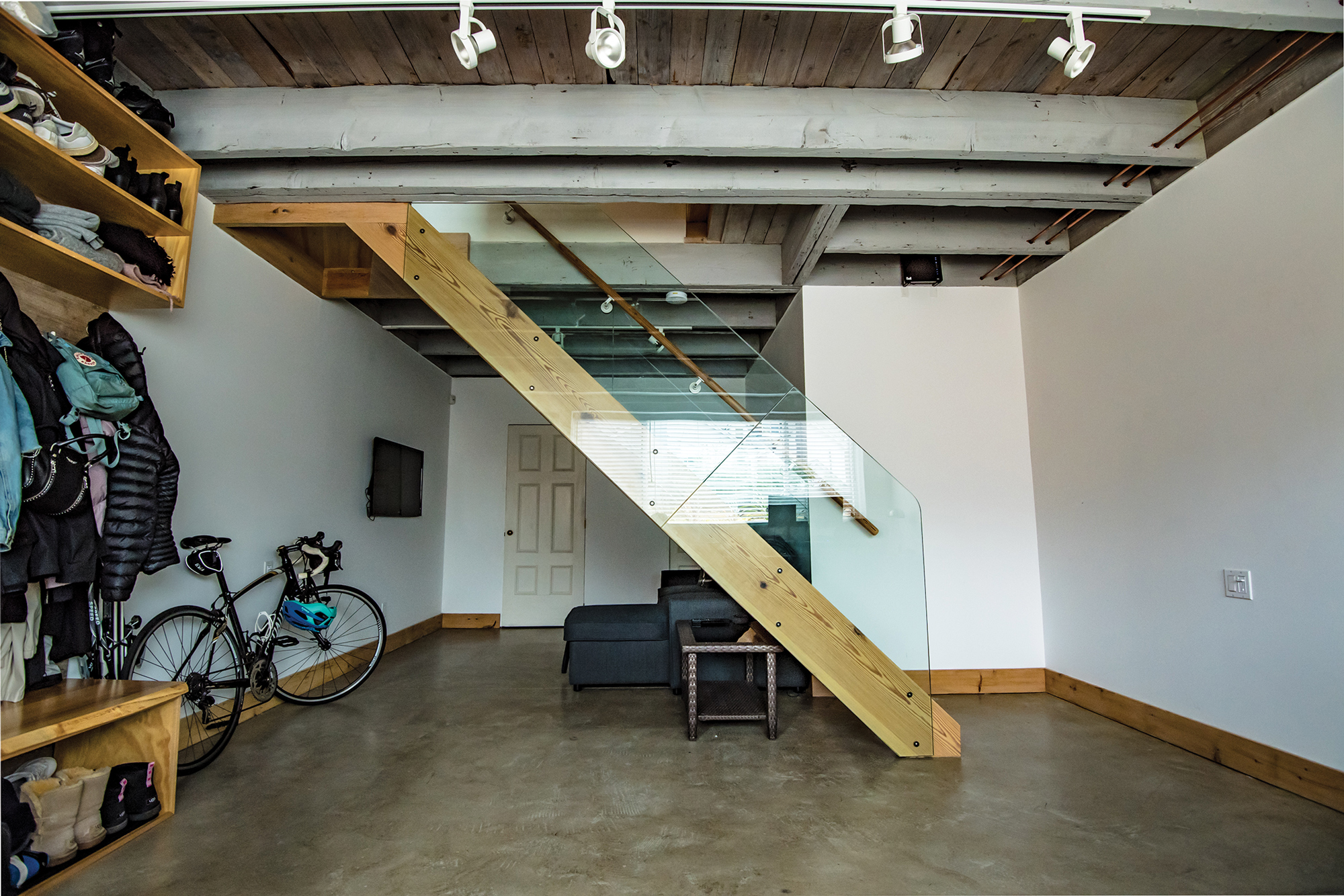 There’s halo track lighting in this bedroom, and a built-in bed frame: 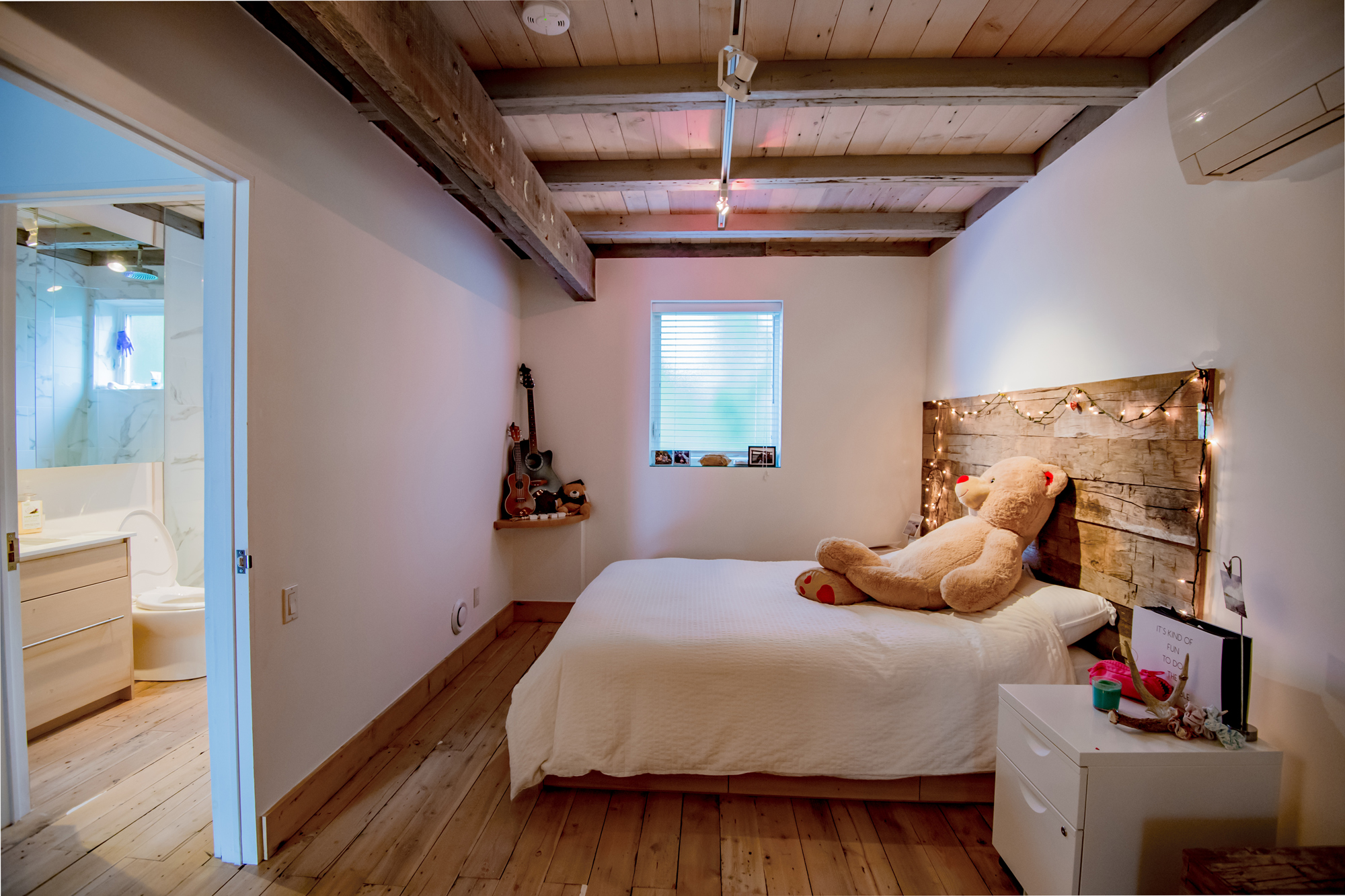 The exterior is made from Kebony wood. McGregor bridged a section of the top floor, creating a carport with room for two vehicles: 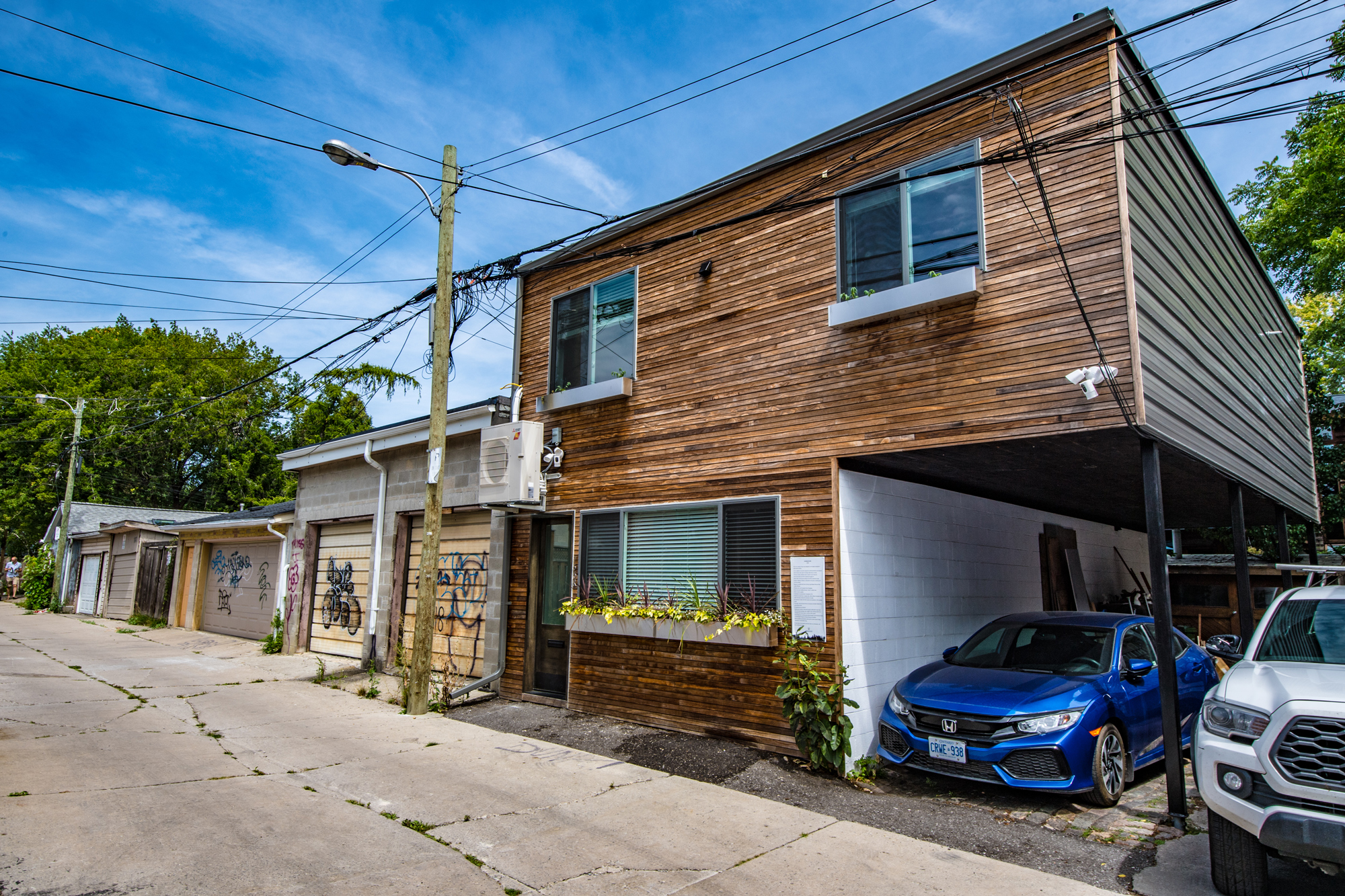