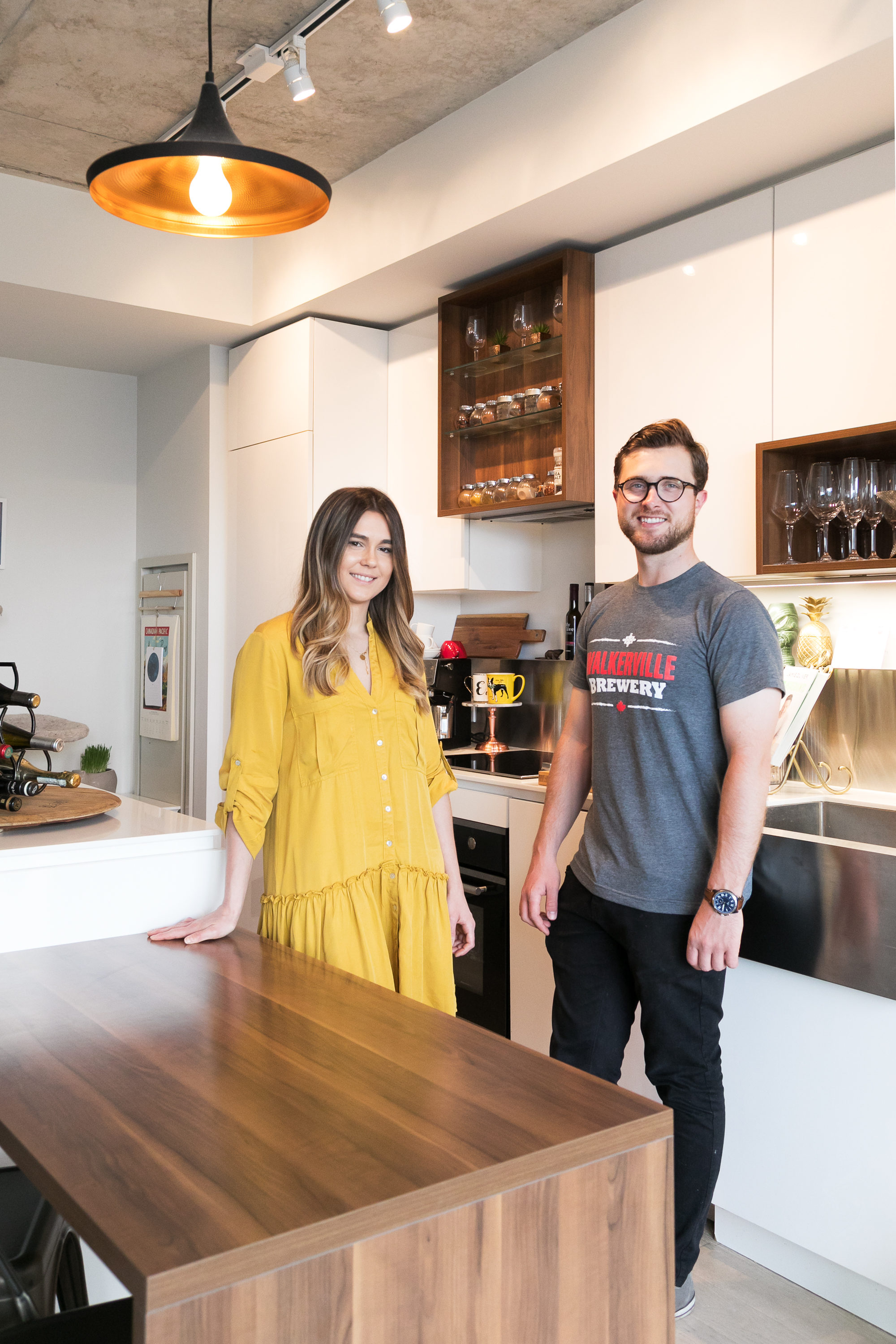 Emily and Mike met in the U.K., in the spring of 2016, while Mike was teaching abroad for a year. Emily is from England, but she was already planning on moving to Canada when they started dating—she even had a flight booked to Vancouver. “I’m an outdoorsy person, and loved the idea of west-coast life,” she says. Mike grew up in Erin, Ontario. When it was time for him to head home, he convinced Emily to move to Toronto with him, instead.

Upon arriving in the city, they stayed in an Airbnb for eight weeks while they tried to find the perfect place to live. They wanted an apartment with a loft-like vibe, in a cute, walkable neighbourhood with access to public transportation. This teeny unit in Roncesvalles was one of the first they looked at. It had everything they needed, plus a balcony and a view of the Toronto skyline, which was the clincher.

The place was definitely cozy for two people, but they were used to small spaces: “Back in England my bed was in my kitchen,” Mike says. “So even having a bedroom was a plus for me.” Around the time they moved in, in January 2017, they got two Maine coon cats. The breed can grow up to 25 pounds, but these ones are calm enough that they don’t monopolize the space. To keep things manageable, Emily and Mike bought a litter box that doubles as a bookshelf. They devoted an entire corner of the condo to a custom cat tree.

The condo was relatively new, and it had been made for compact living, with tucked-away appliances and seamless finishes designed to make the most of the space. Because Emily and Mike were coming from England, they didn’t have that much stuff. Now, the challenge is keeping their buying in check (Emily has a thing for HomeSense). “We didn’t want to feel cluttered, but also didn’t want the space to be super minimalist, like no one lives here,” Emily says. 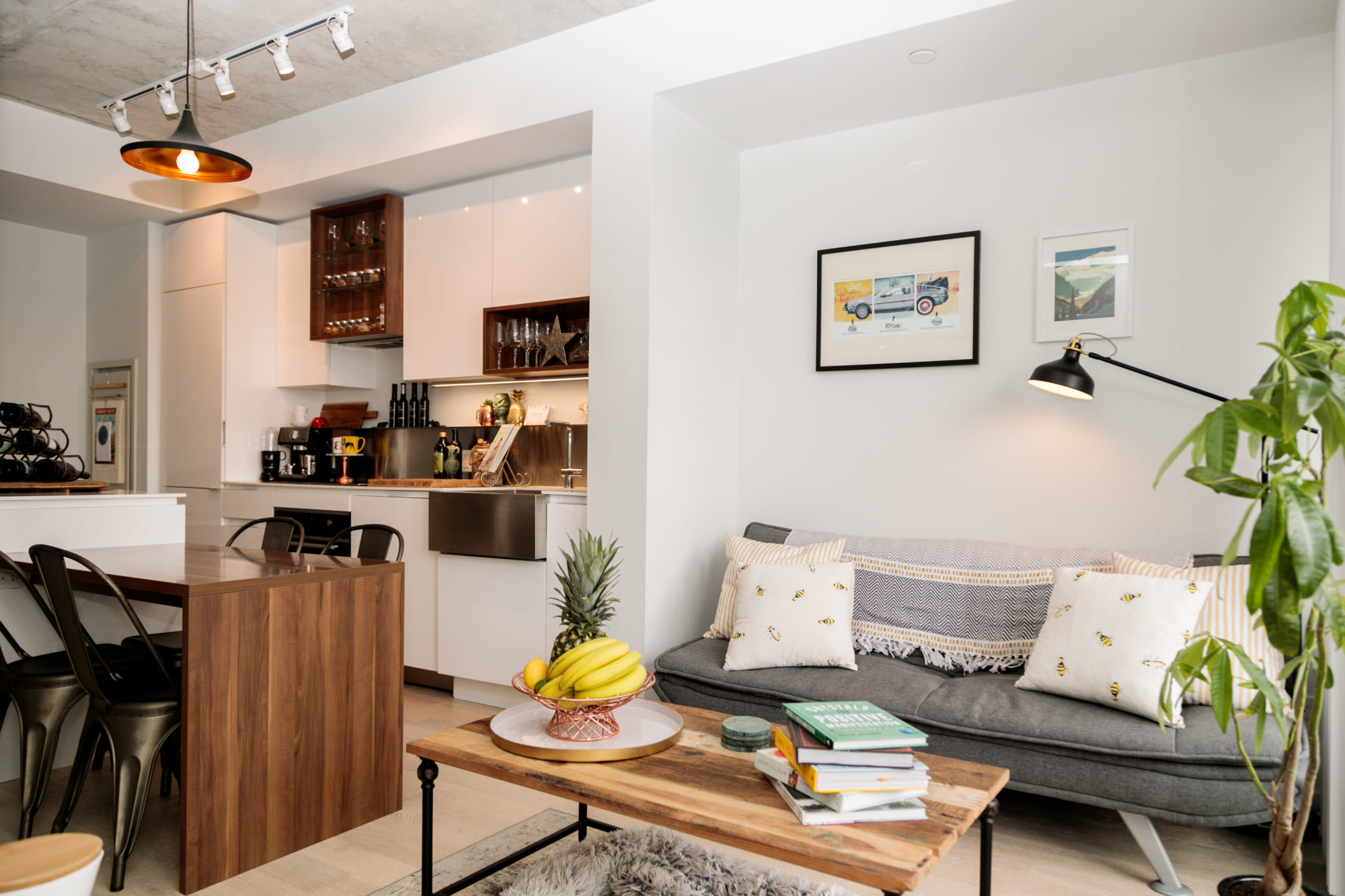 Mike is studying to be a sommelier. Emily surprised him with this HomeSense barrel for his birthday. It reminds them of the tables at their favourite restaurant, Bar Raval: 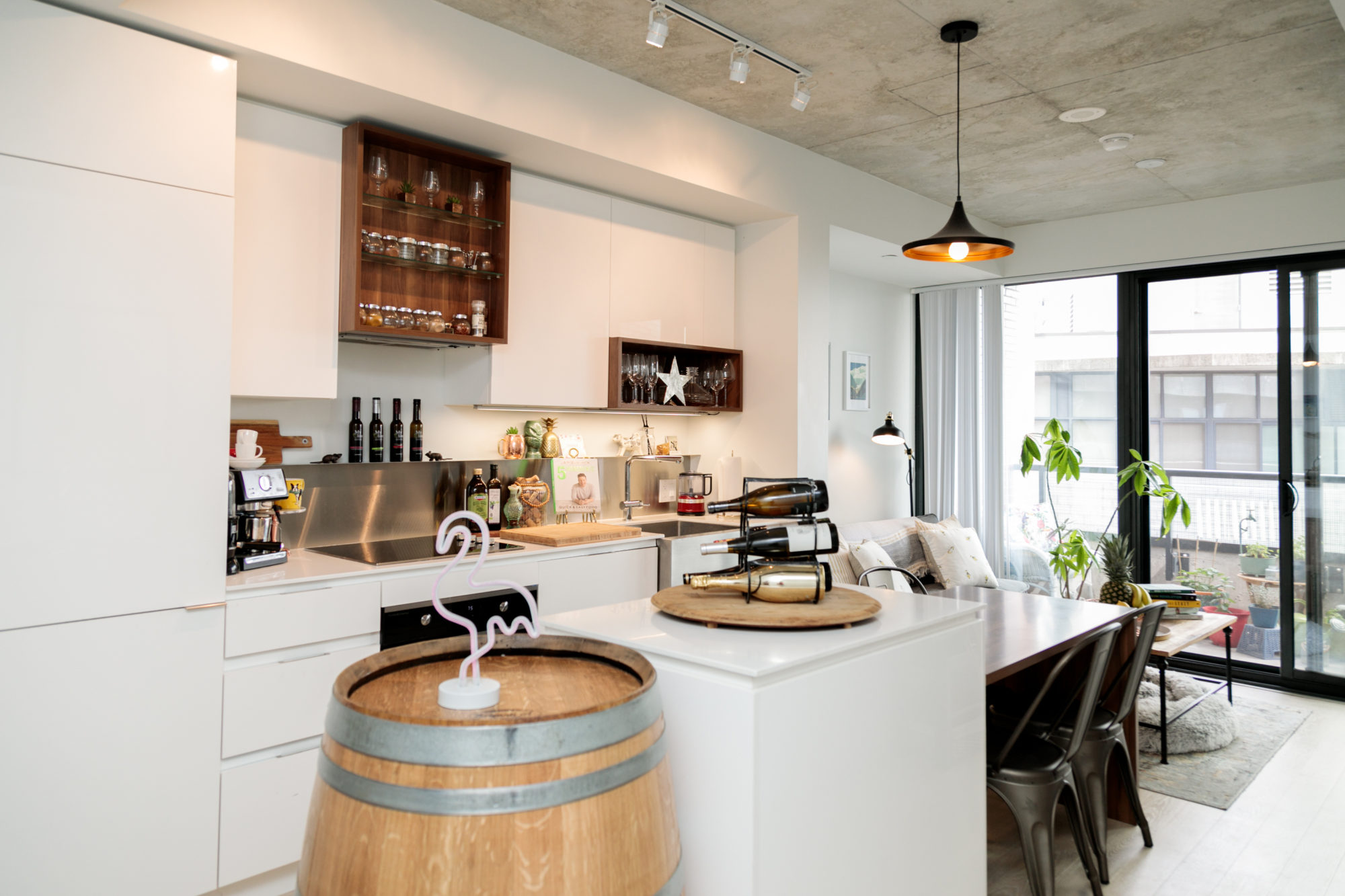 They hung maps of Toronto and Leeds (their hometowns) above their bed: 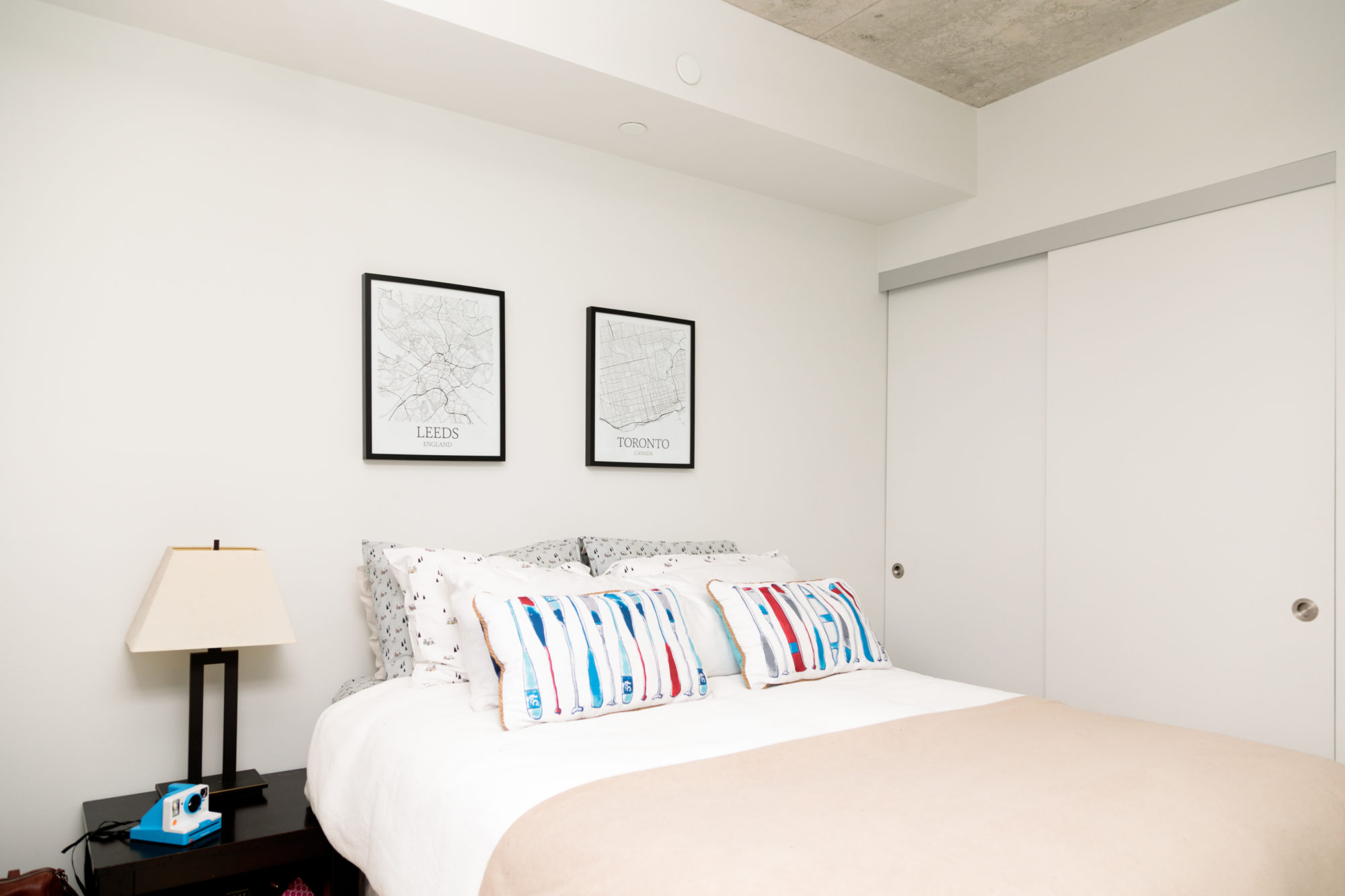 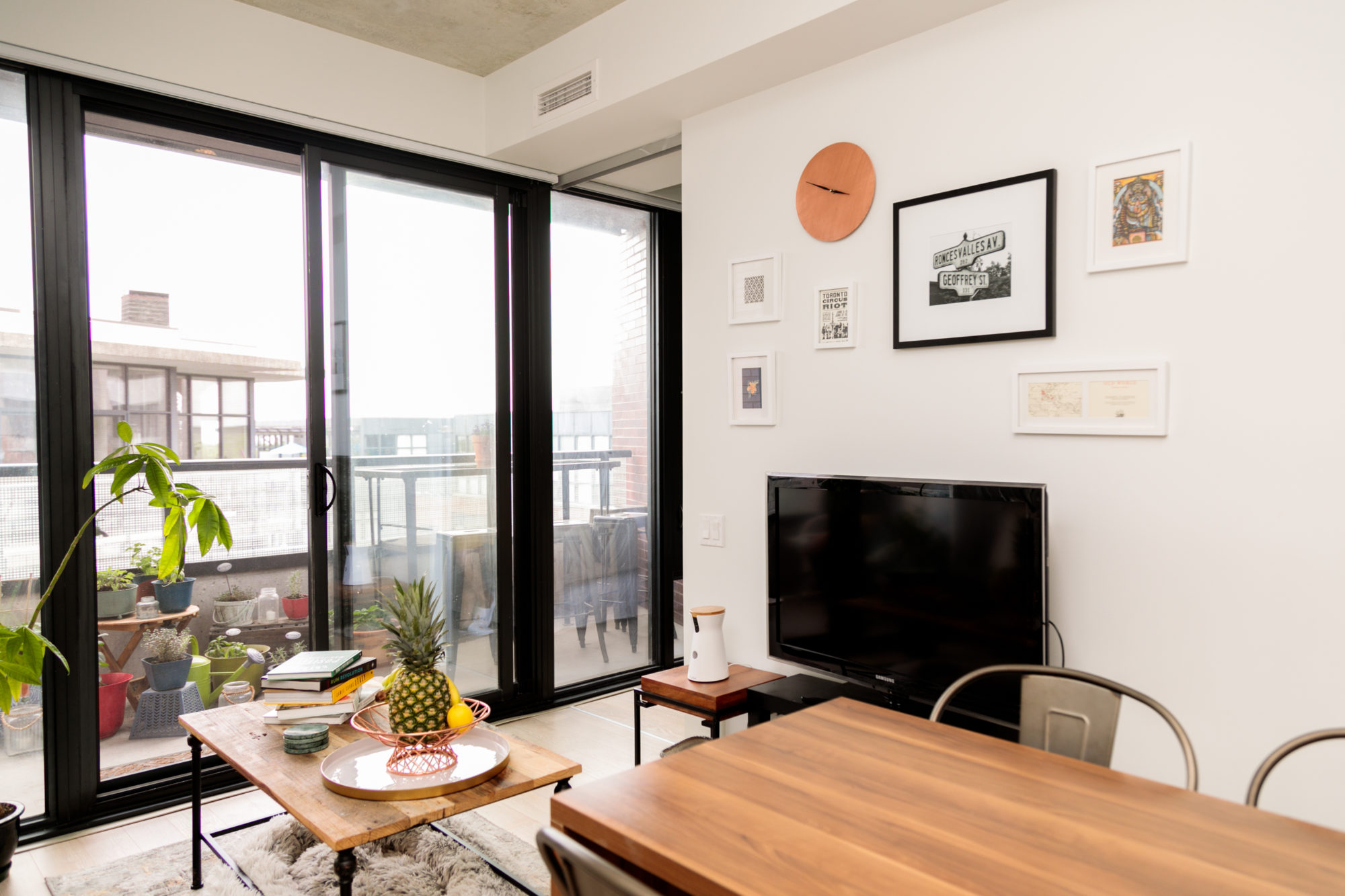 Here’s their cat tree. It was custom made for them by a friend of their cat breeder. They found the litter box on Amazon, and they love that it looks like a side table: 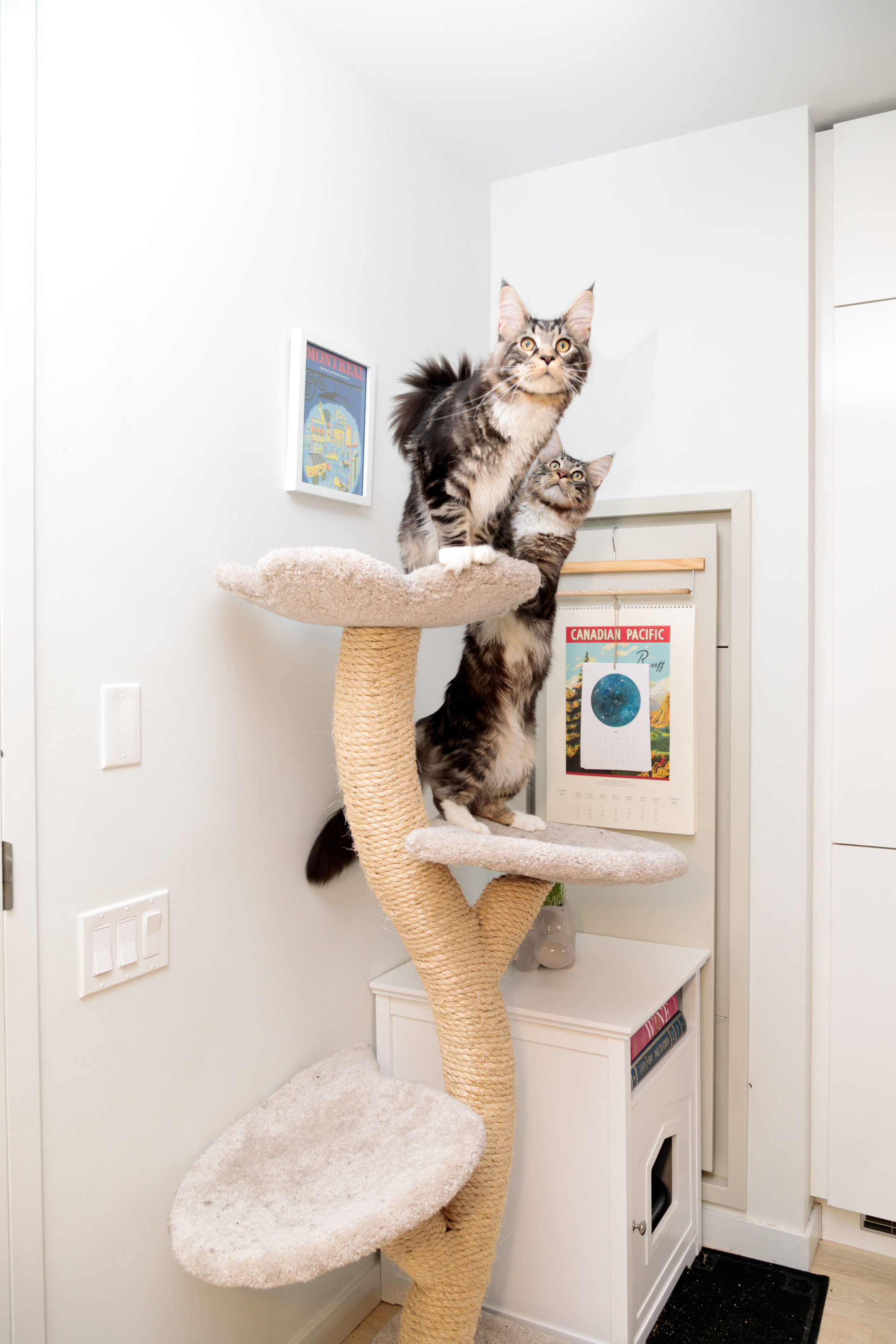