Where: Liberty Village
How big: 400 square feet
Days in quarantine: 66
How much: $2,000 per month (includes a locker and parking)

In 2019, Danielle lived alone in a one-bedroom City Place condo for $1,475 a month. When her landlord put it on the market, she started hunting for a $2,000 apartment in the west end, where she could be closer to her office in Mississauga. With the help of a colleague, she found a 400-square-foot condo in Liberty Village. Danielle liked the neighbourhood’s restaurant scene and had some friends who already lived in the area. Plus, the building was a two-minute drive from the Gardiner Expressway, making her daily commute more manageable.

Before Covid-19, Danielle drove to her real estate firm’s office in Mississauga every day. Her days usually consisted of sorting through paperwork, connecting with clients and co-ordinating viewings. Now, virtual tours are the norm, and the usually hectic spring market has noticeably slowed. When Danielle does show a property, everyone has to wear a mask, and Danielle uses Lysol wipes to sanitize the space.

To maintain her sanity during the pandemic, Danielle is sticking to a routine. To maximize her sleep-in time, she’ll eat during her 9 a.m. Zoom meeting. Then she’ll post up on her living-room sofa and work on her laptop for the rest of the day. Later in the afternoon, she’ll slide her coffee table aside to make room for her yoga mat and do strengthening exercises on the floor for half an hour. In the before times, she ran up and down the stairs in her condo for cardio, but now she worries she’ll run into other residents in the cramped space. Danielle has asthma, so she’s extra-serious about social distancing. “I don’t really know how my body would react if I caught the virus,” she says.

Once every two weeks, she’ll venture out to the nearby Metro, where she’ll purchase frozen dinners. Danielle loves that her kitchen has full-sized appliances, and her large fridge has been especially useful for storing weeks’ worth of food during the pandemic. She says the hardest part has been not being able to see her family, but she does a group Zoom with her parents, 92-year-old grandmother, brother and sister-in-law every single night.

Danielle rarely used her oven before the pandemic, but now she uses it every day to heat frozen meals. She rarely uses the kitchen island for work because she finds it much more comfortable to sit on the couch. On the weekends, she treats herself to a decaf version of Dalgona coffee—instant coffee whipped with sugar and water, then poured over milk: 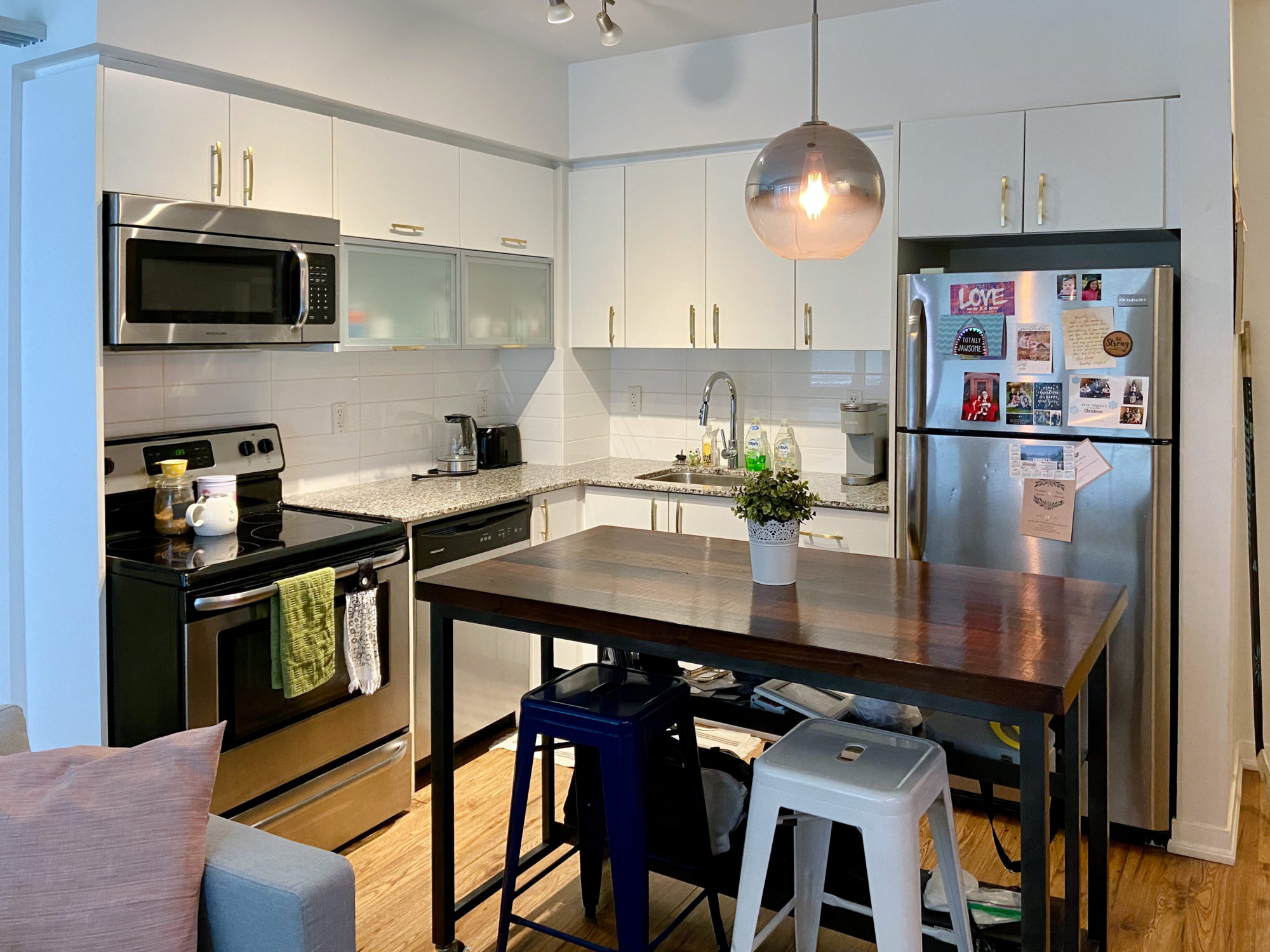 The kitchen opens up right into the living room, and the bedroom is separated by a sliding door. When she works during the day, she admits got getting distracted by the TV, which she tunes to CP24. She also sleeps with the TV on, because it drowns out noise from her neighbours or outside. “It can get pretty loud in Liberty,” she says. 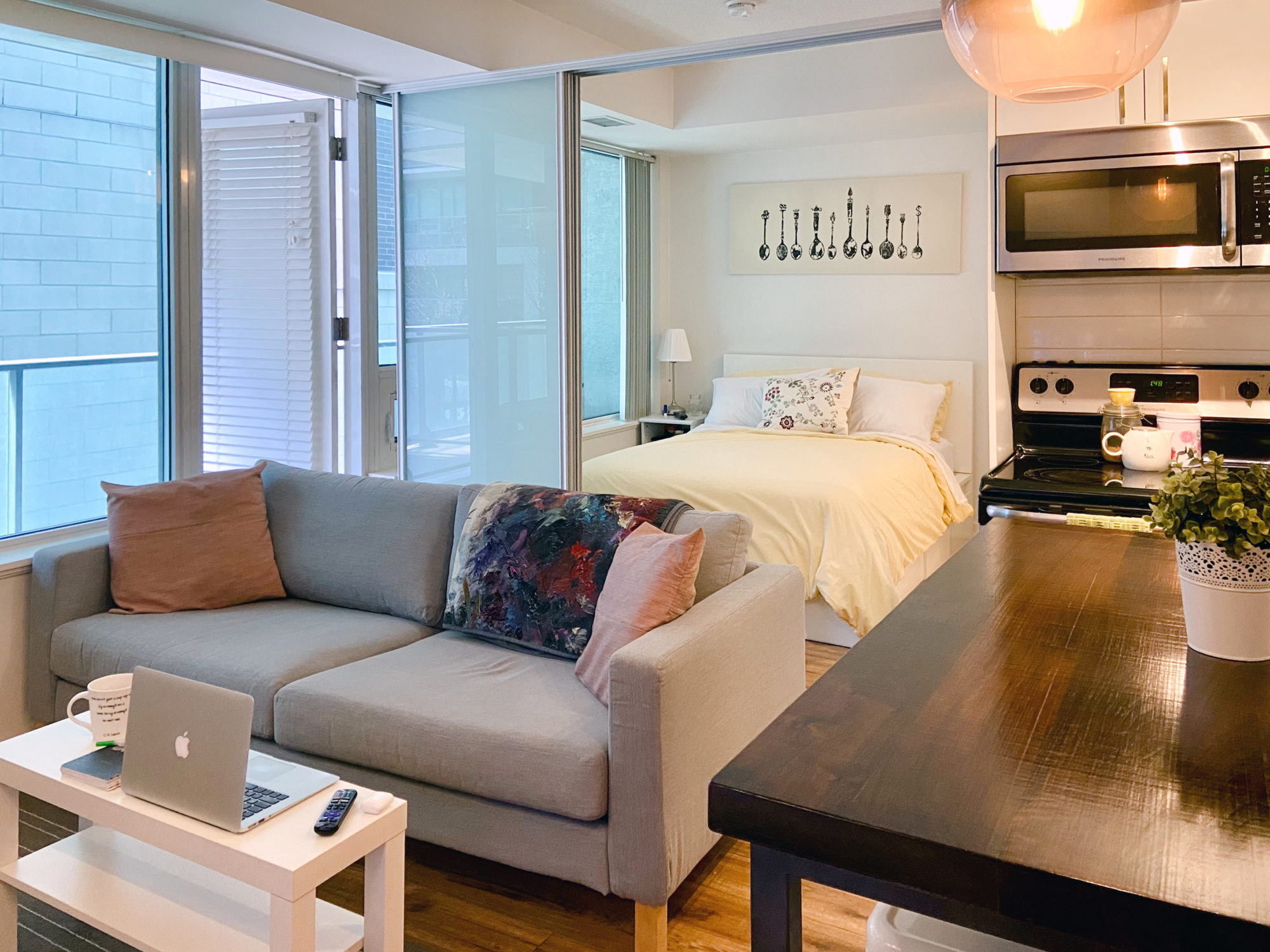 Her bedroom has two small closets, which hold most of her clothing. Drawers under her bed hold the rest of her shirts and pants. She bought that spoon-themed canvas art at Ikea. 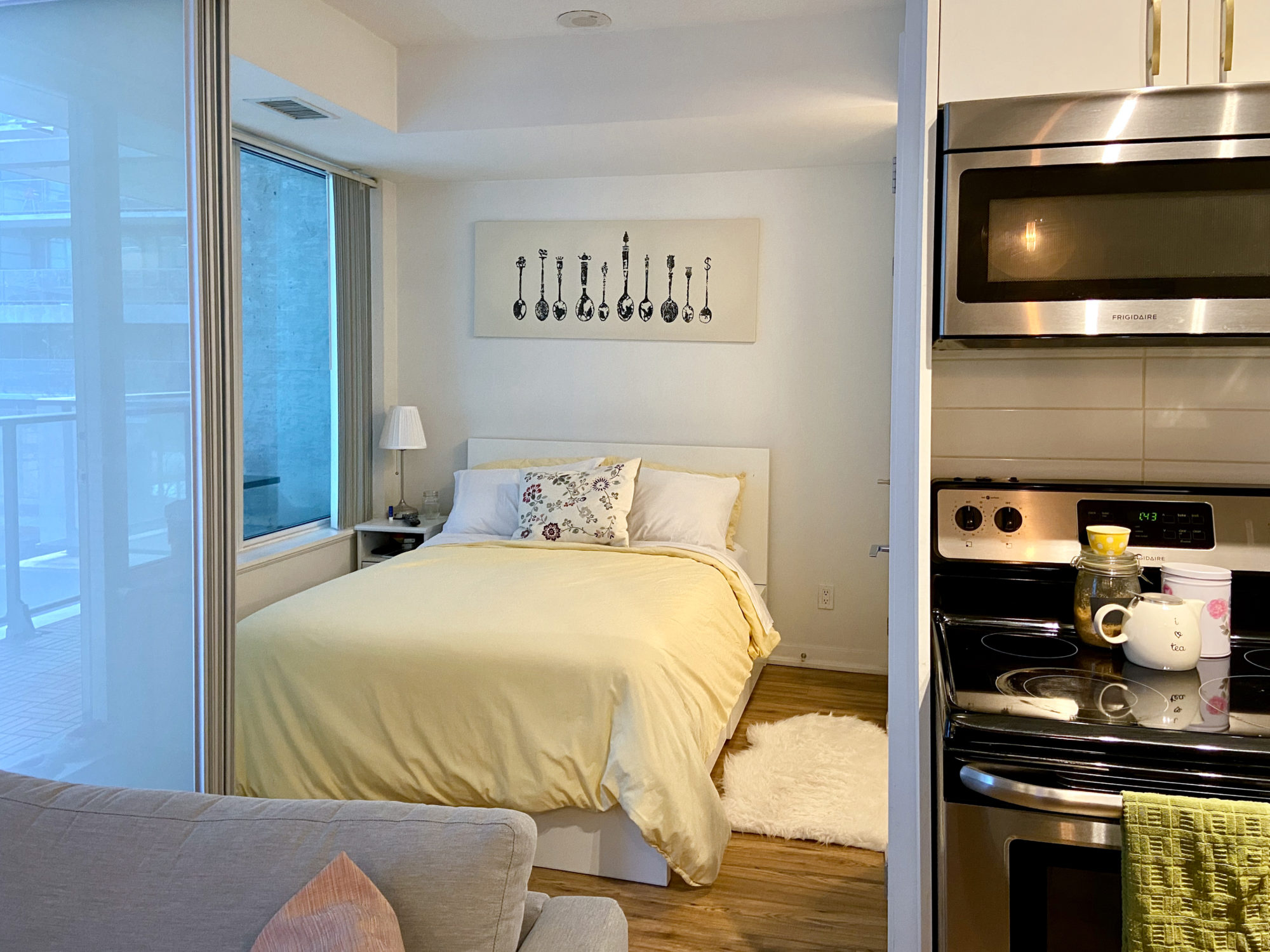 Danielle loves the funky bathroom wallpaper. One of the biggest downsides of the space, for her, is that there’s no bathtub. “I’m definitely a bath person,” she says. 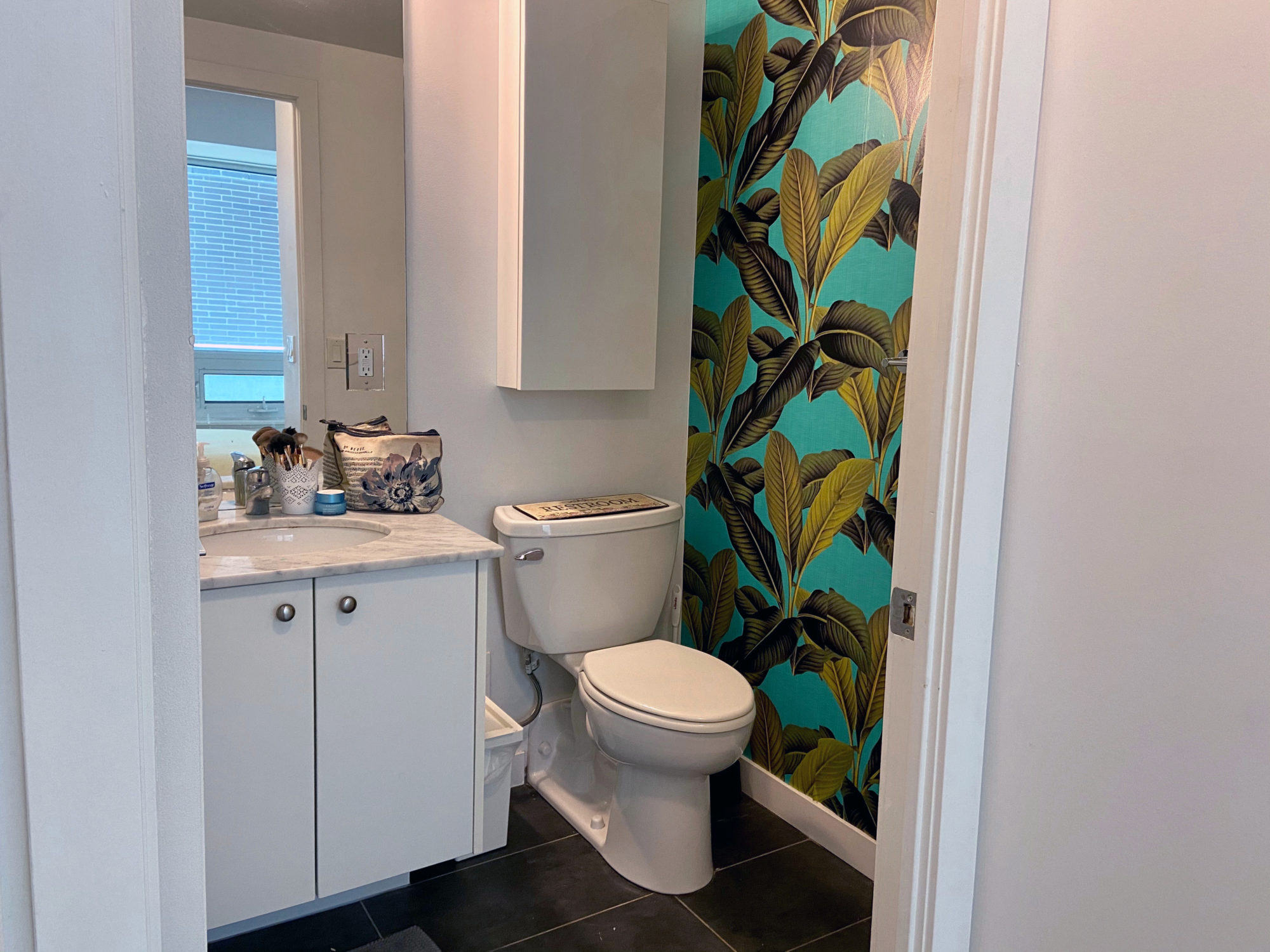 Sharks are her favourite animal, so Danielle mounted a shark’s head on the shelf above her TV. “I’m a little obsessed,” she says. Since her bedroom closets are so small, she uses the shelves to store towels, extra blankets and pillows. Danielle painted the TV stand herself, and added knobs to match the side table, which she built in a high school woodworking class: 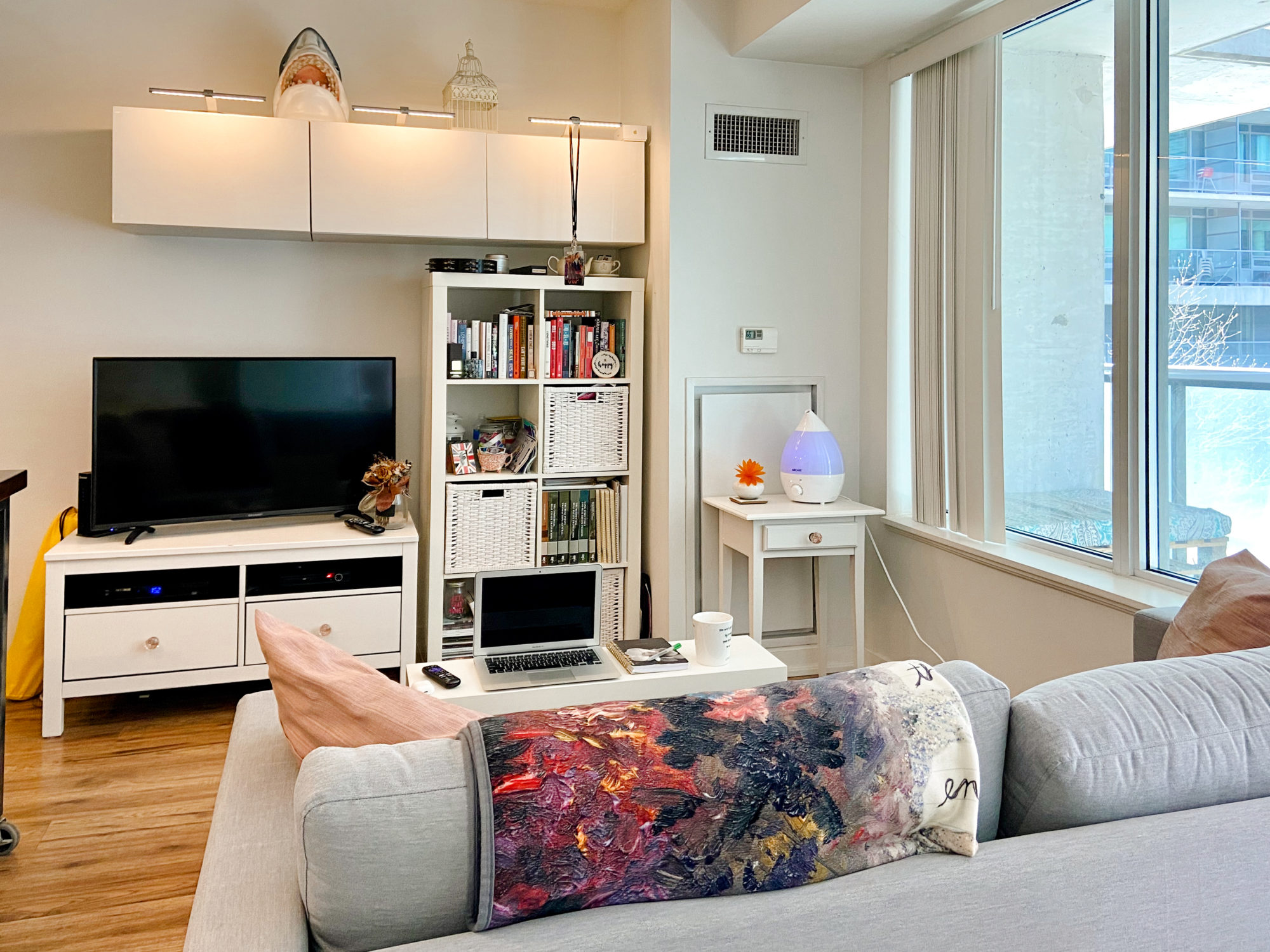 This photo is one of Danielle’s favourite pieces of decor. It’s features Danielle and her best friend, Kelsey, with Taylor Swift. They met her in August 2018 at a Detroit concert. In the middle of the concert, Taylor’s mother invited them backstage. “Apparently, Taylor has her mom pick about 20 to 30 fans out of the crowd at almost every show to come hang out in a backstage lounge,” says Danielle. 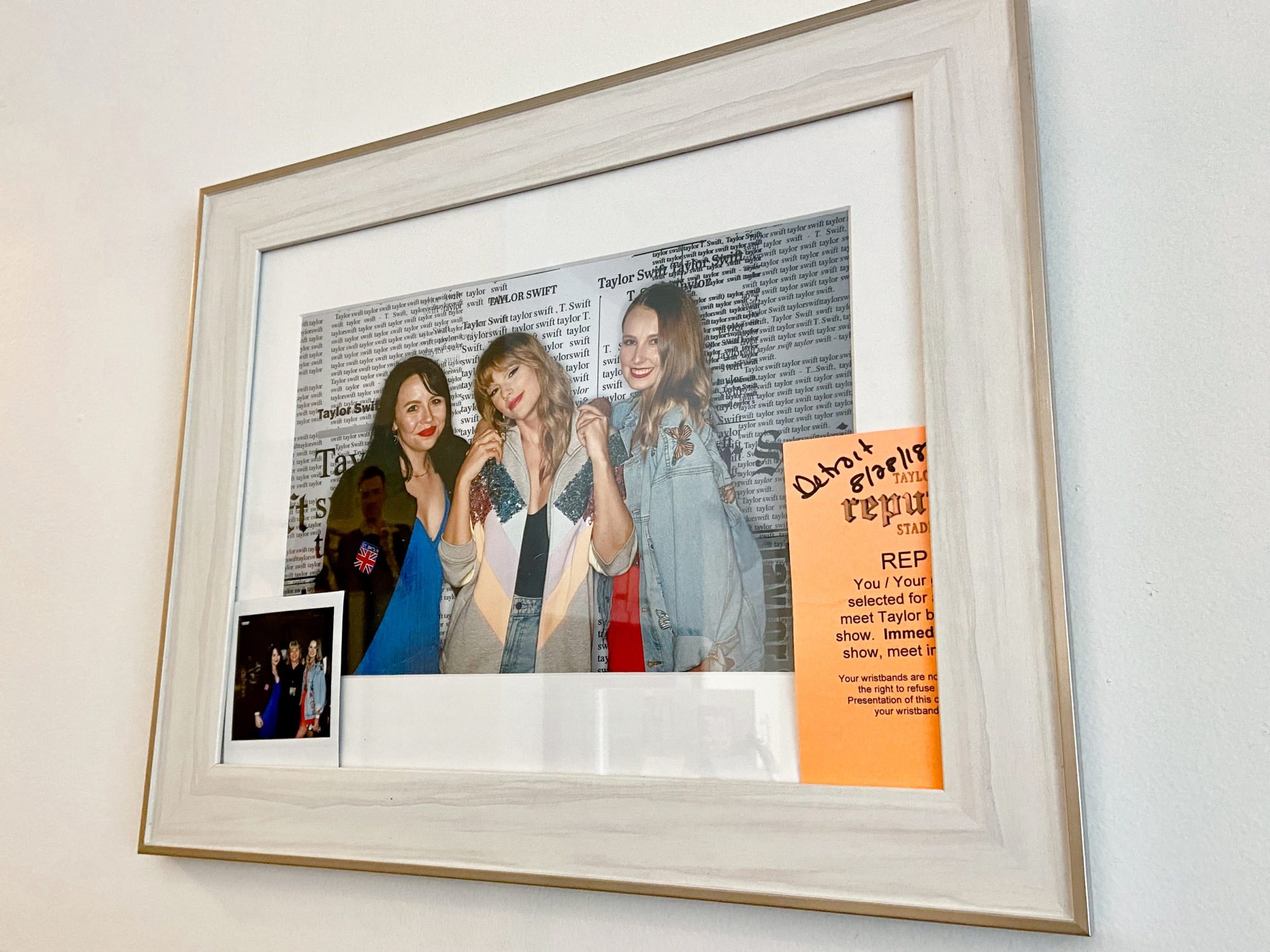