The couple are both ship captains

In 2007, Cheryl and Gordon met while working as sailors on a ship in the Harbourfront. They lived in a condo on the waterfront for a while, but when their son Strummer was born, they started looking for a boat so he could fully experience the nautical lifestyle. “It wasn’t a matter of if we’d live in a boat—but when,” says Cheryl. They found a 47-foot steel-hulled sailboat in Prince Edward County, just down the road from Gordon’s parents’ house. The previous owners had the boat custom-built and sailed it through the Mediterranean and Caribbean.

In 2014, the family officially put the boat in the water and they’ve been living on it ever since. In the summer, they dock at the Toronto Island Marina and, in the winter, they set up at Marina Quay West. Next year, they plan to take the boat on a long cruise down to the Caribbean.

When it came to their living space, which is less than 300 square feet, it wasn’t much of a sacrifice for Cheryl and Gordon: they’d both sailed for years and were used to living with only the necessities. They have their own queen-sized bed at the stern (back) of the boat and Strummer has a bedroom inside the bow (front). Innovative storage solutions—like stuffing bed sheets into throw pillows and using ceiling racks to store skateboards and fishing rods—help reduce clutter. Cheryl and Gordon also make sure to regularly purge unnecessary items. Despite the lack of space, the family has hosted 15 guests in the living room for a Christmas party.

Here’s the boat in its winter parking spot near the Toronto Music Garden: 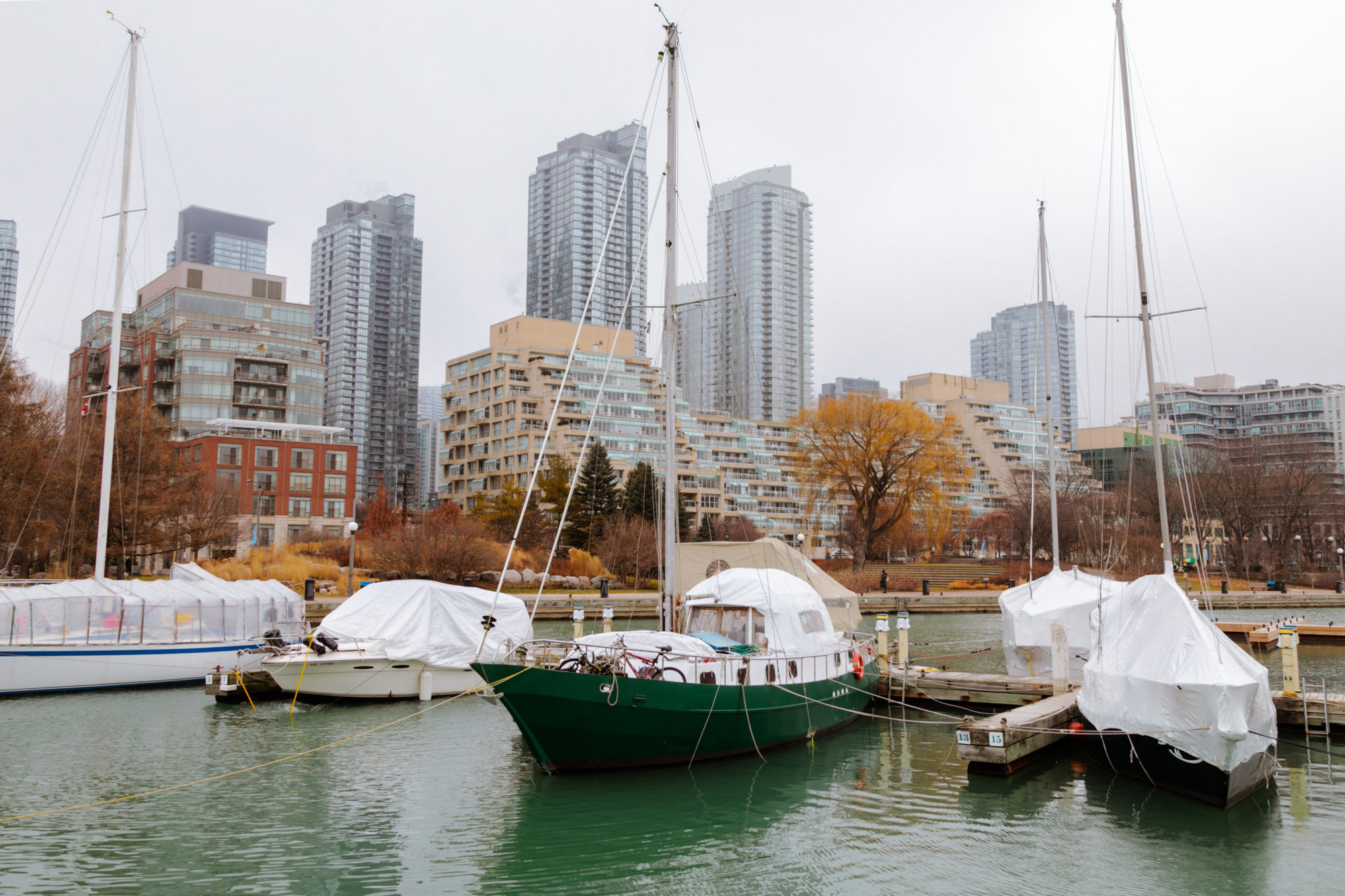 The cockpit, with all its navigational systems, is in the centre of the boat: 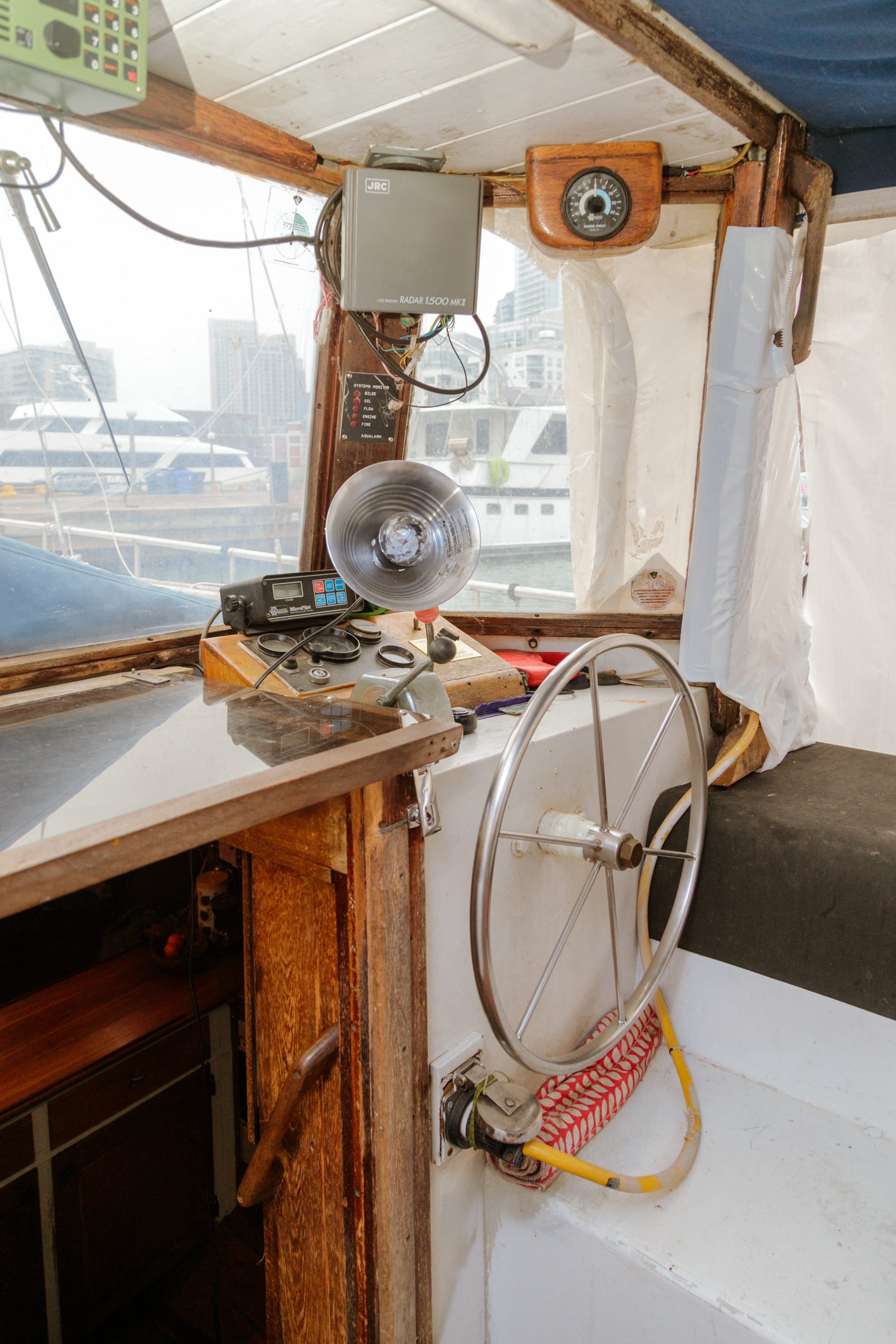 Here’s the kitchen area. They rely on electricity to power their infrared heater and have a backup generator in case of emergency. Instead of a refrigerator, they use a cold box: 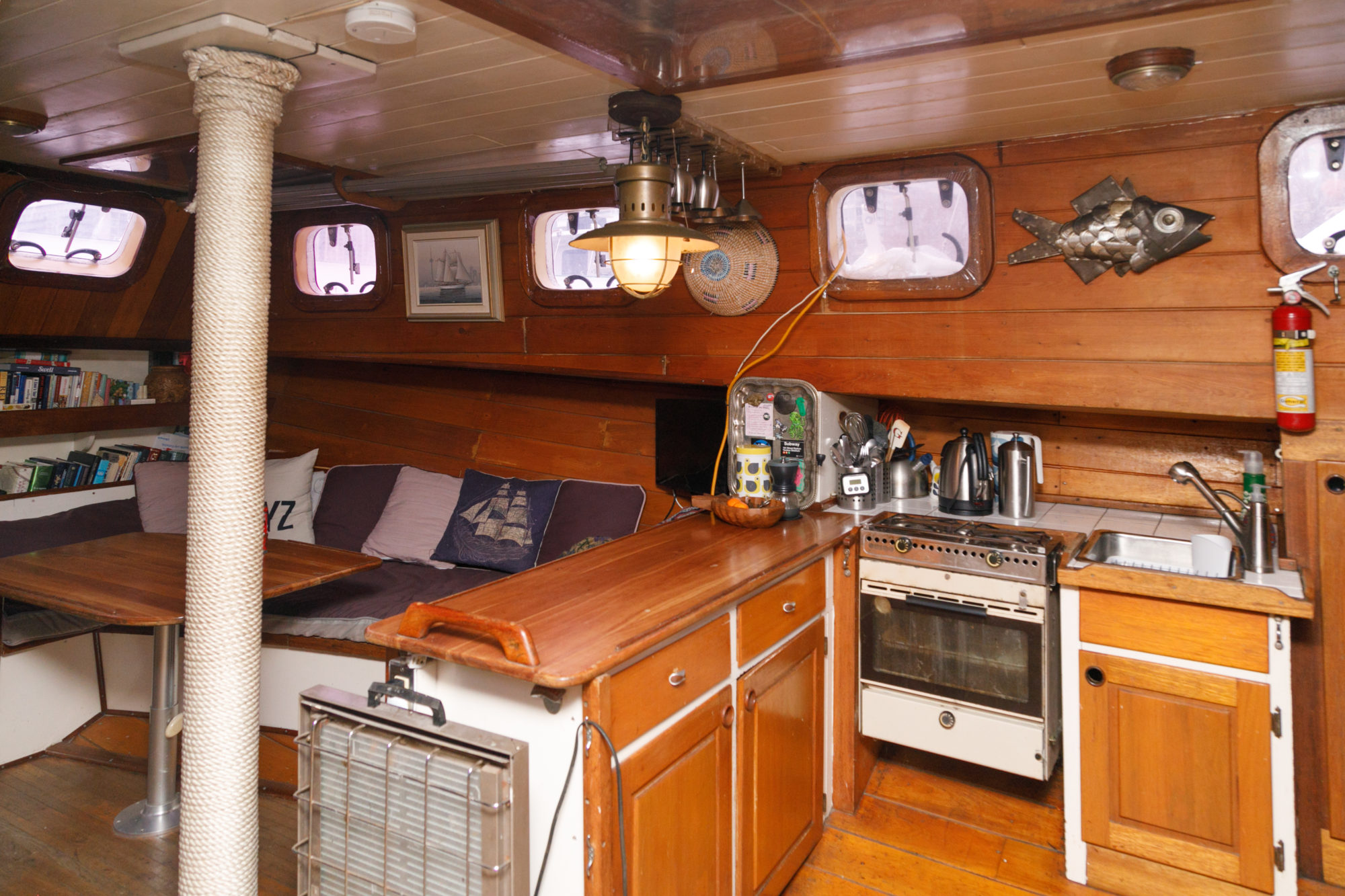 There’s storage space underneath the banquettes, which are built into the boat. One side is for spare parts and the other holds Strummer’s Lego collection. Fishing rods are stored in ceiling racks: 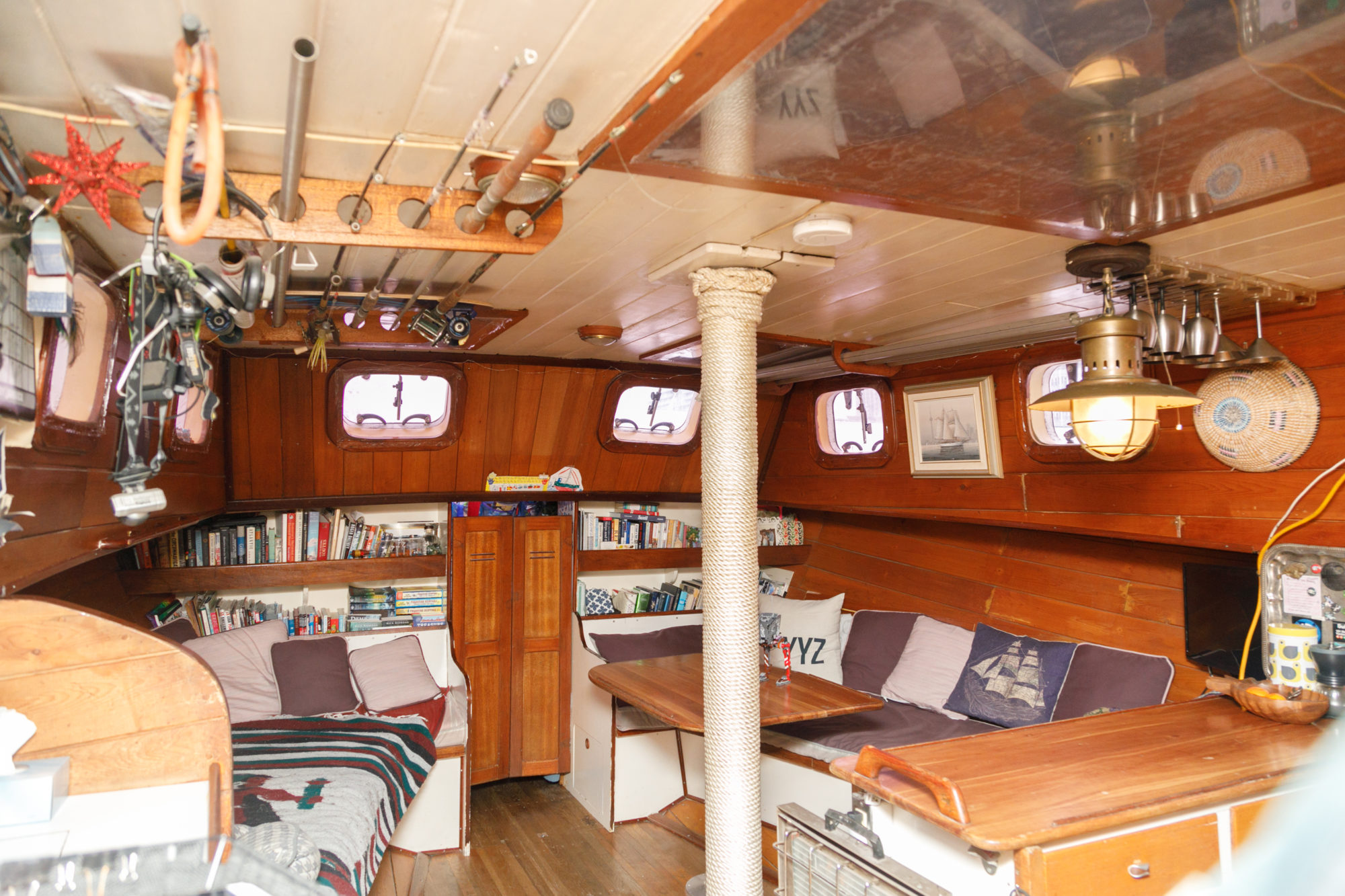 So is Strummer’s skateboard: 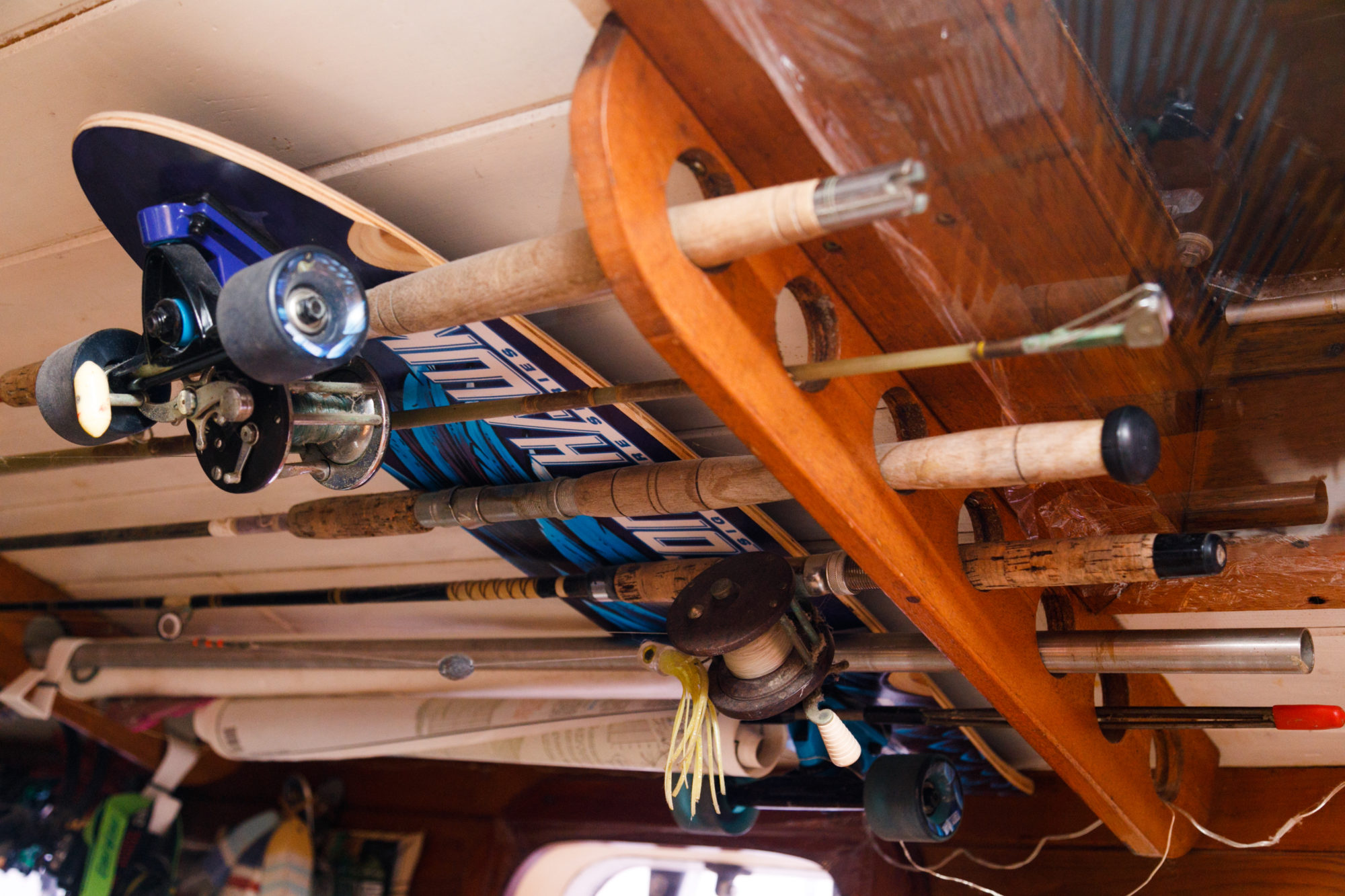 The throw pillows are stuffed with extra bedsheets and blankets. Strummer’s bedroom is through those doors: 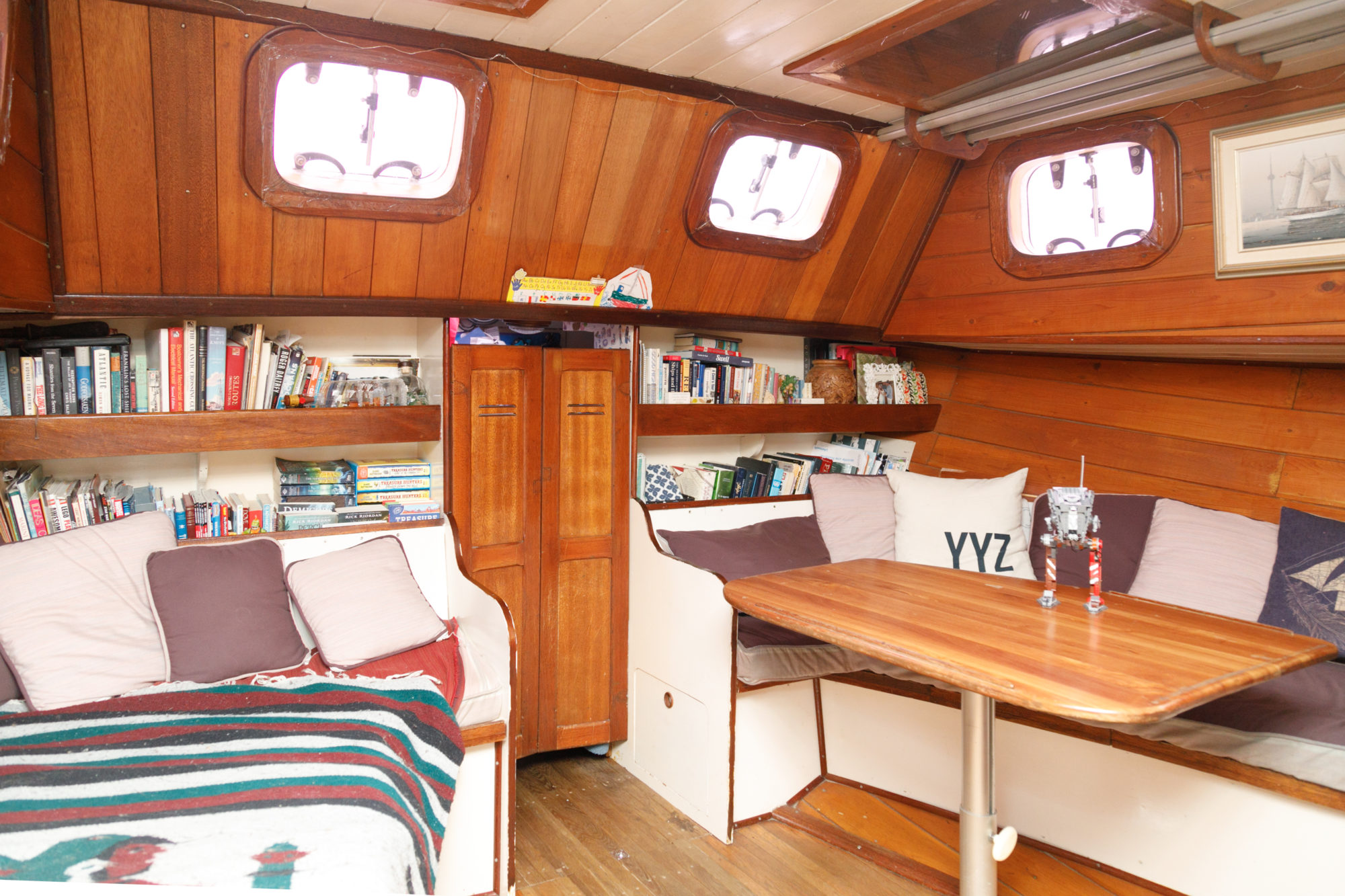 Of course, his bedroom is nautical themed: 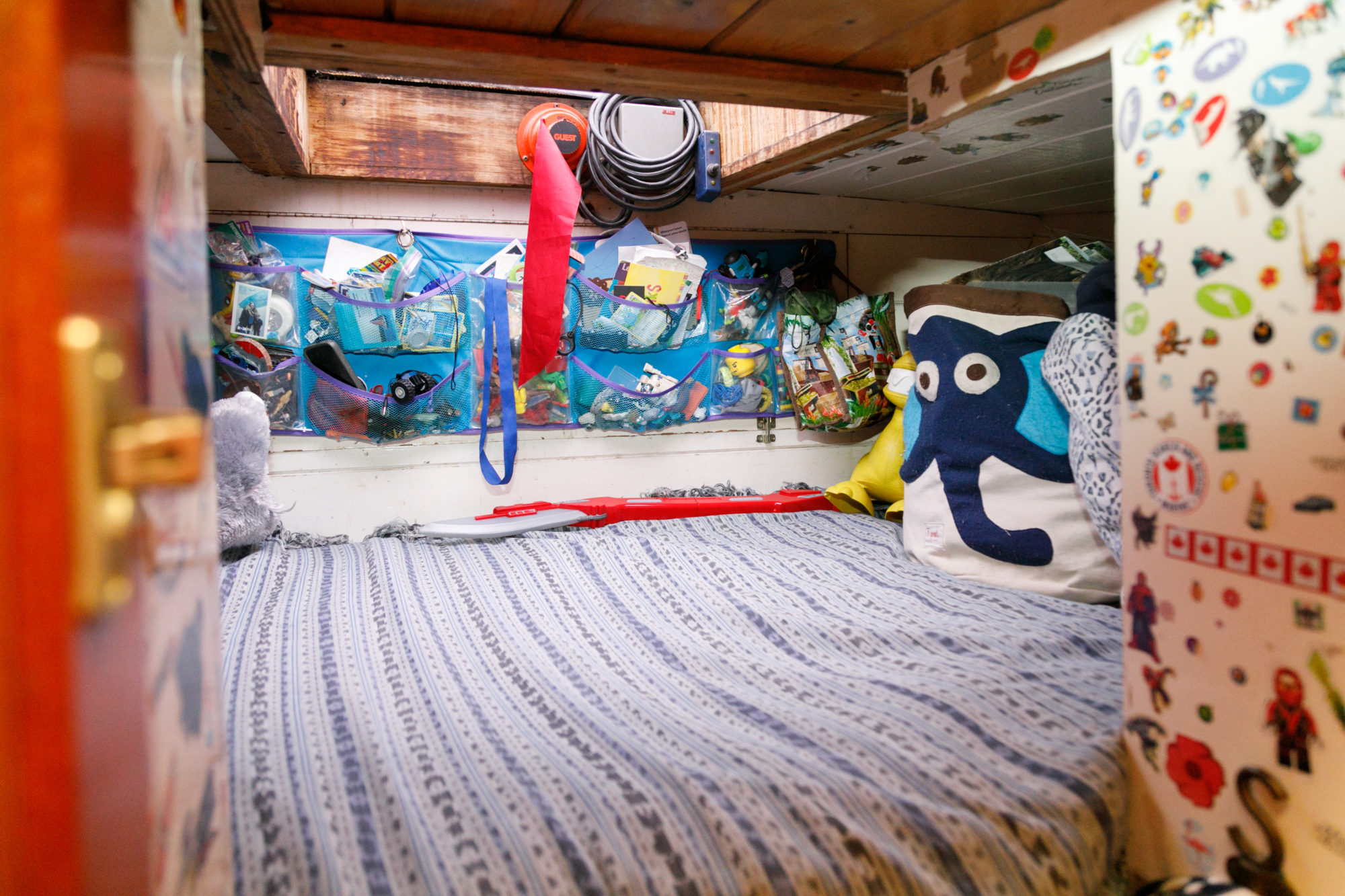 They could shower on the boat, in theory, but it would use up most of their water supply. So, the family washes up at the marina: 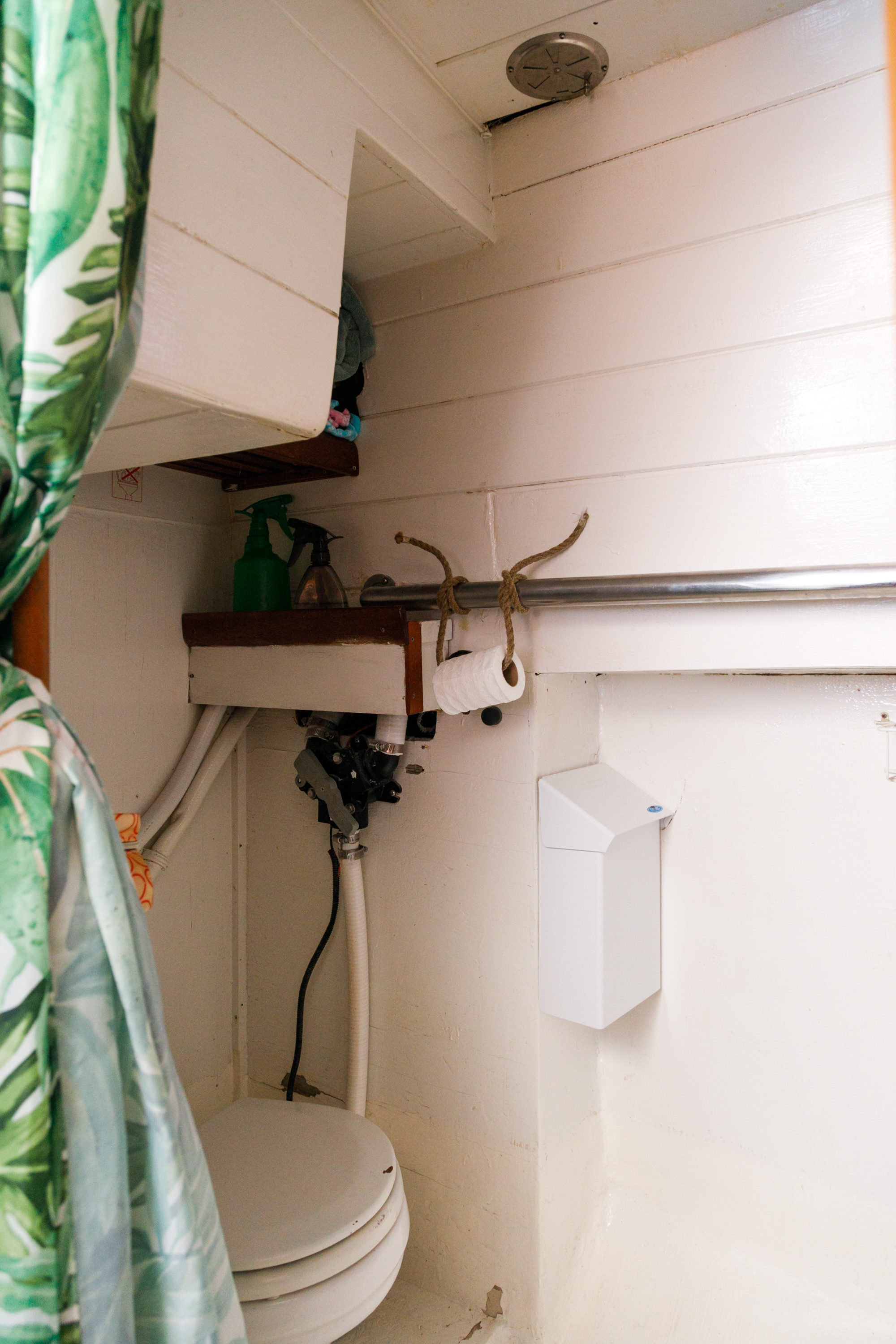 Here’s Cheryl and Gordon’s bedroom. They store Christmas decorations underneath the queen-sized bed: 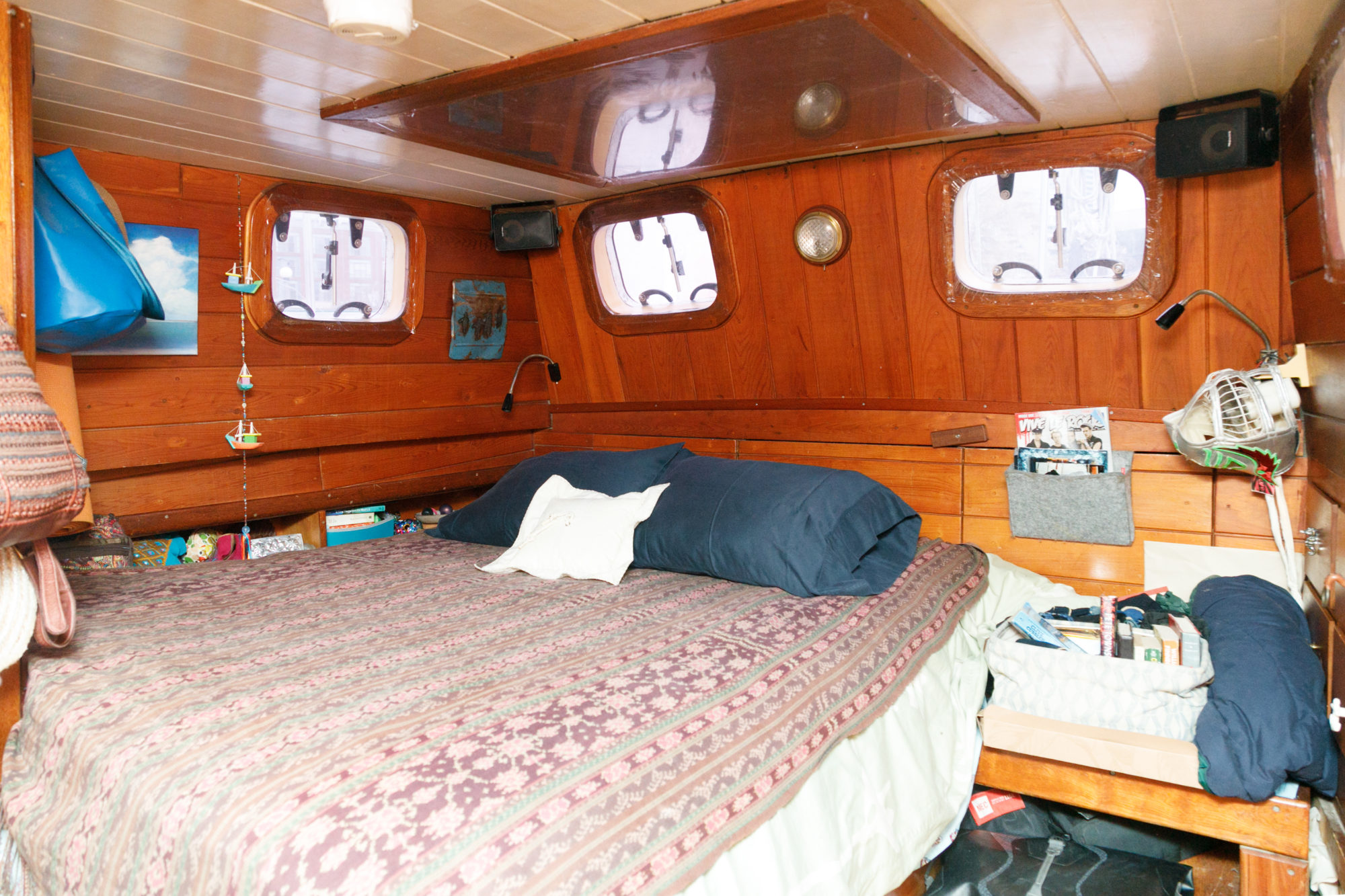 It’s a fully-functioning sailboat, so they have walkie-talkies and a radio: 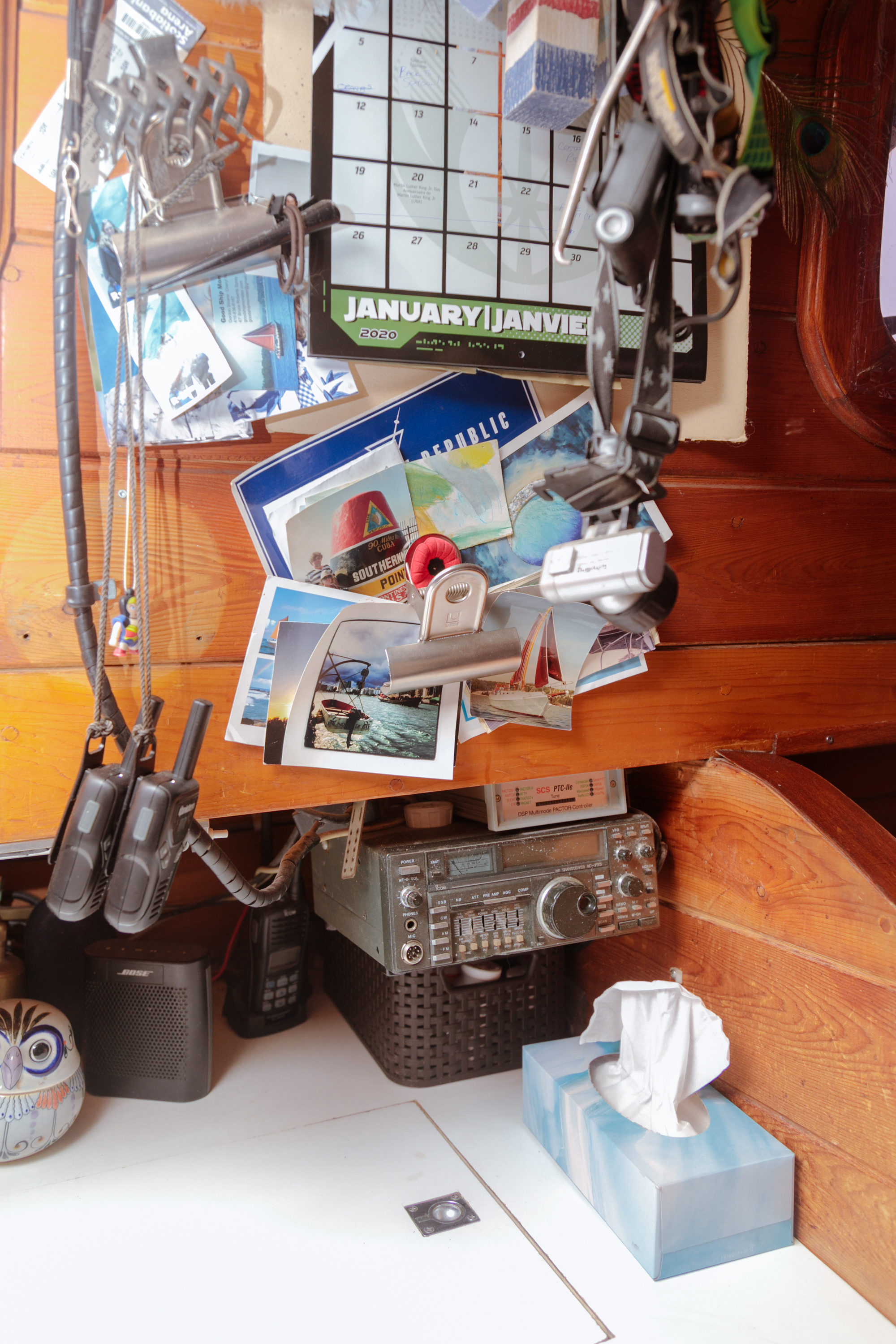 Do you live in a tiny place? We want to talk to you.