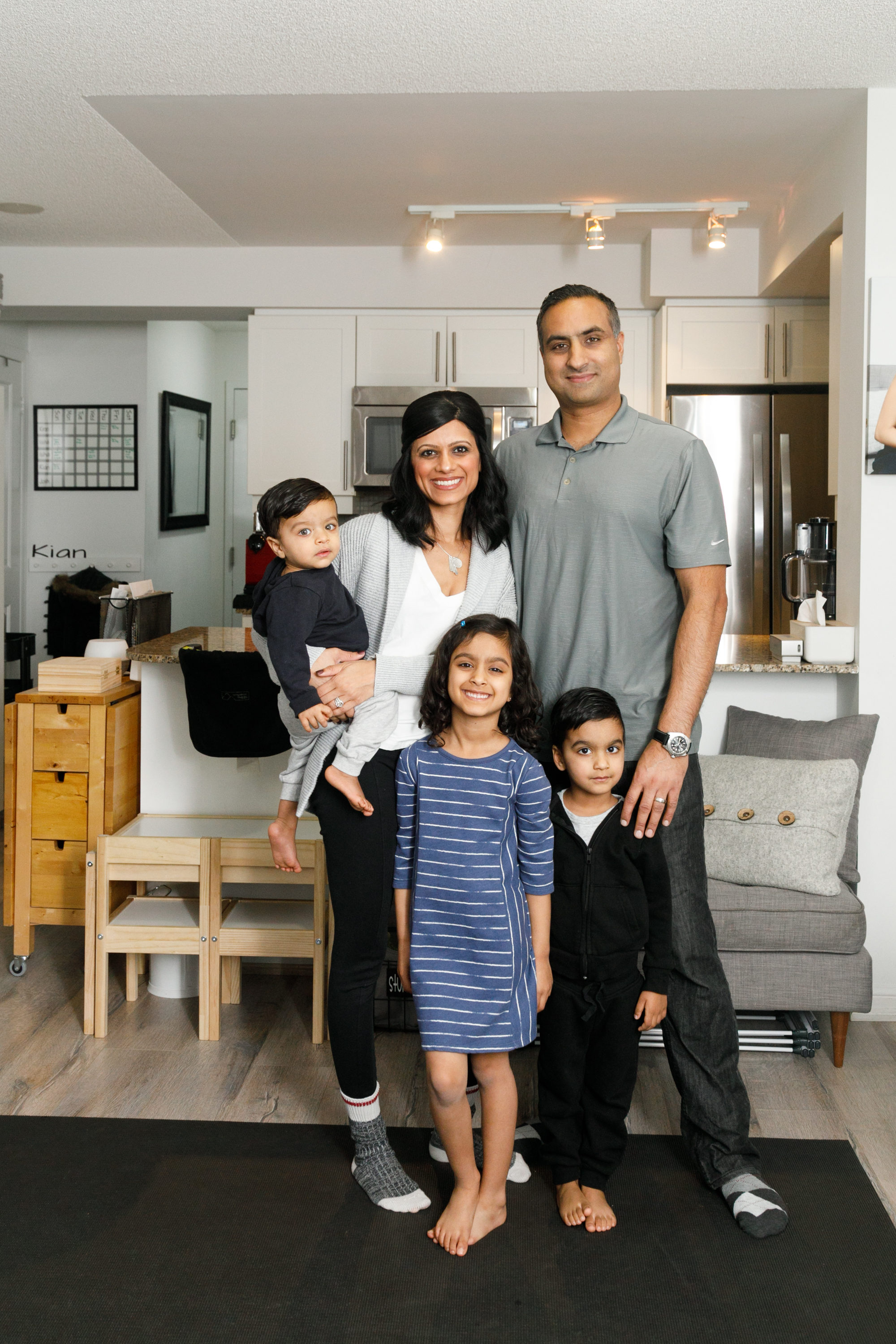 In 2013, Vaishali and her husband Kiran bought a triplex in Bloordale. They lived in a one-bedroom unit and rented out the others. After having their first child, Isha, in 2015, they rented an 850-square-foot two-bedroom condo at Lakeshore and Bathurst, which offered more space and allowed them to keep renting out their triplex. Vaishali and Kiran thought it would be a short-term solution, but renting out units in the triplex became so profitable that they continued buying income properties instead of a house for themselves.

Now, Vaishali and Kiran own three triplexes and a condo. They continue to live in their two-bedroom rental at Lakeshore and Bathurst—even though they’ve had two more kids, Kian and Josh, in the last few years. Eventually, they plan to move into one of their rental properties, but for now, they enjoy living in close quarters. It means they can watch the kids at all times and never have to worry about them falling down the stairs. Plus, the kids love the condo’s swimming pool.

Here’s how they make it work

There’s no space for a dining room table, so Vaishali and Kiran eat on the couch, while their kids sit at a miniature table. The black rug is actually an oversize yoga mat, where the kids play and Kiran does his workouts. If Vaishali needs to mark school assignments or wrap presents, she uses the foldout table next to the kitchen. 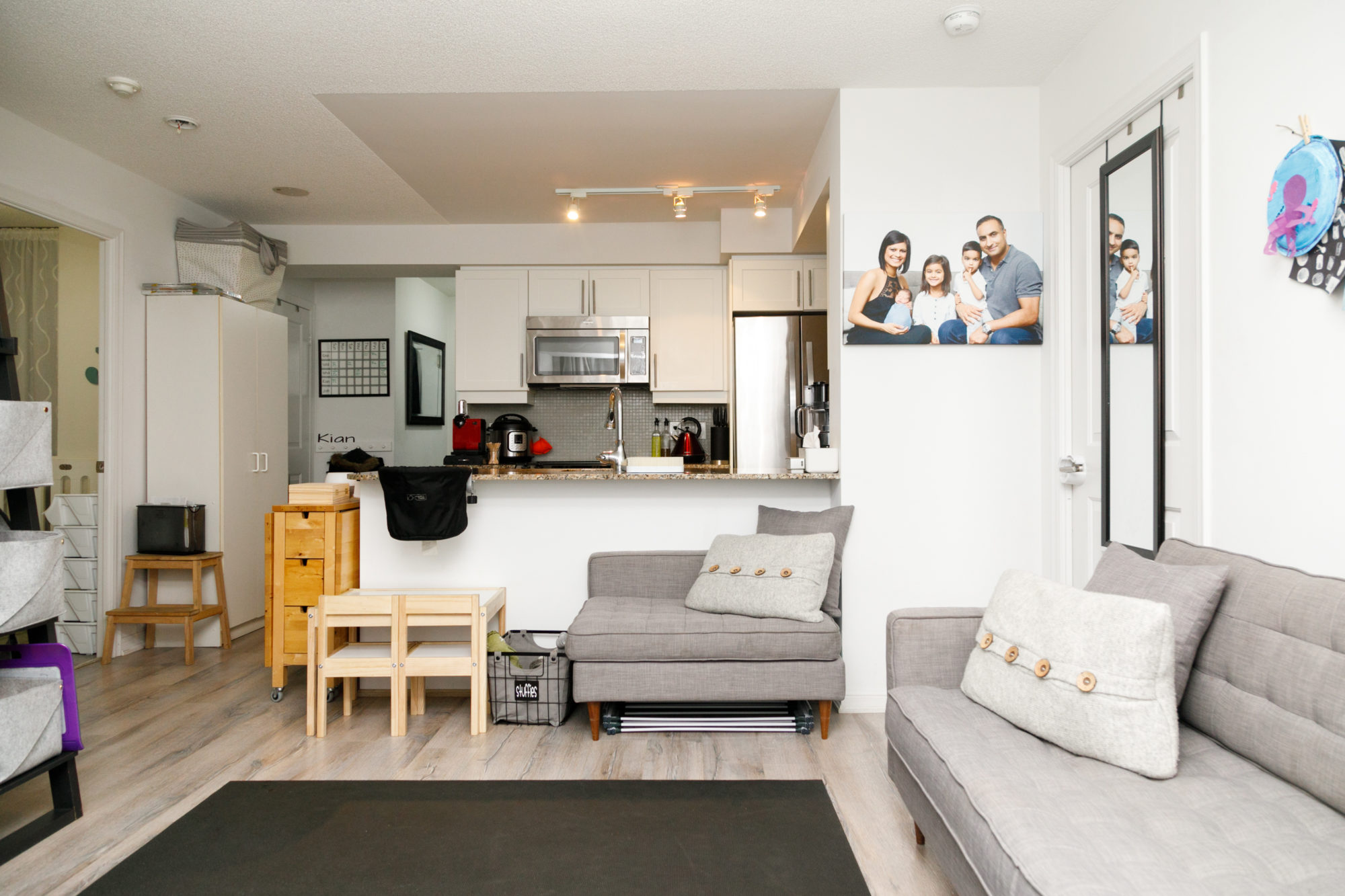 The space under the couches is used to store things like office supplies and children’s books: 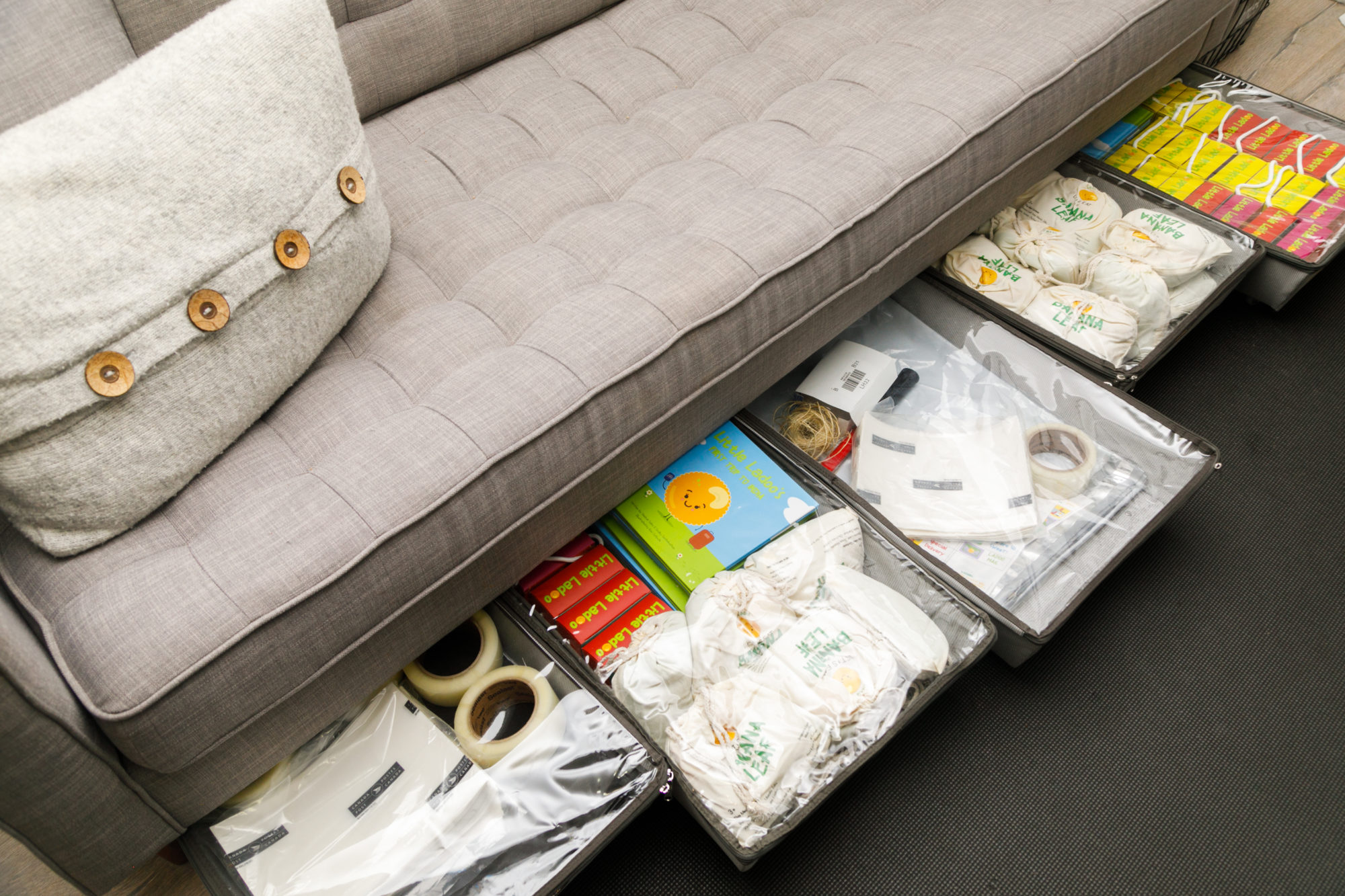 Their one-year-old, Josh, uses a high chair that attaches to the kitchen island: 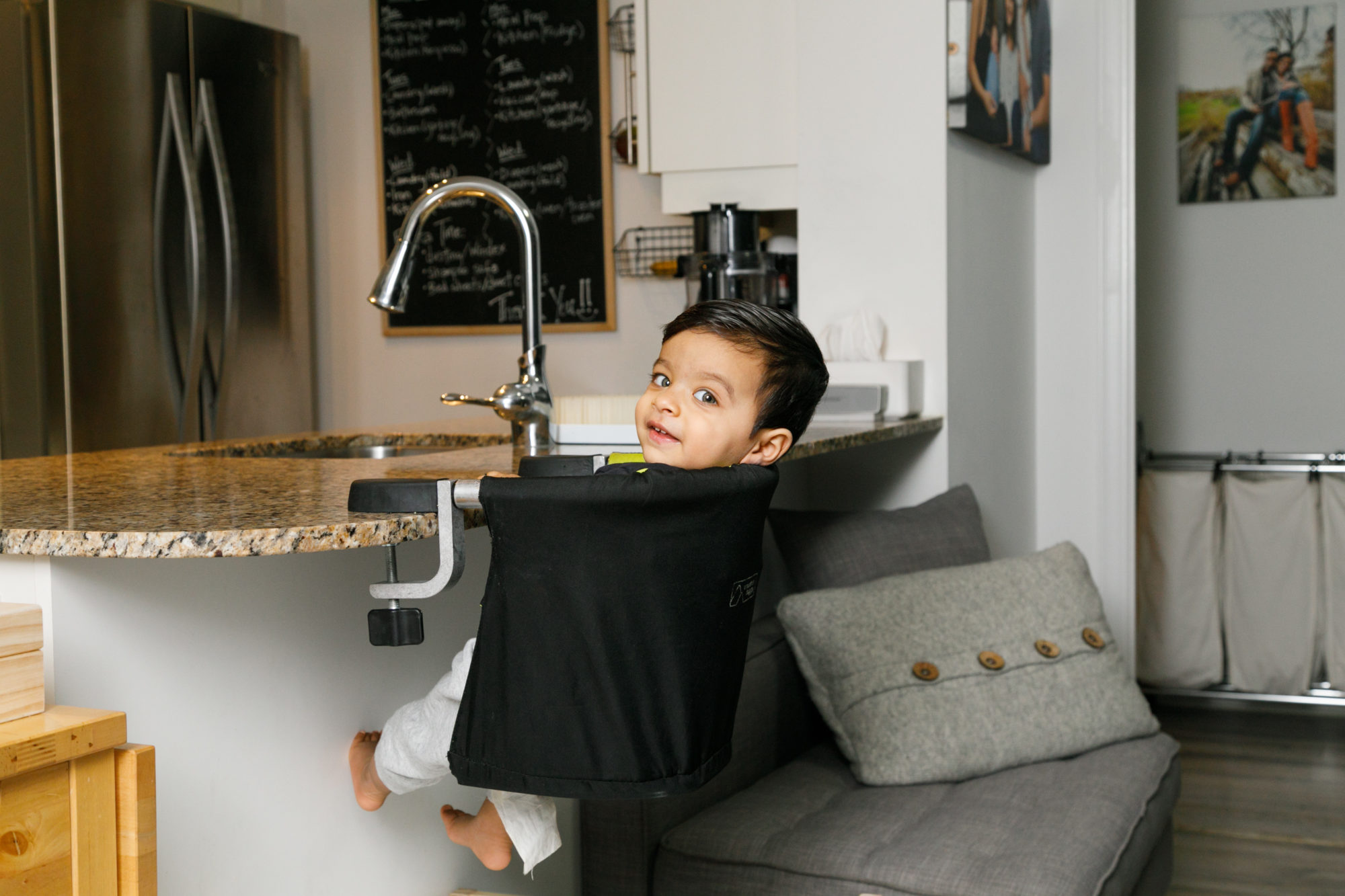 Everything is meticulously labelled in this cupboard, which they added to the kitchen for extra food storage: 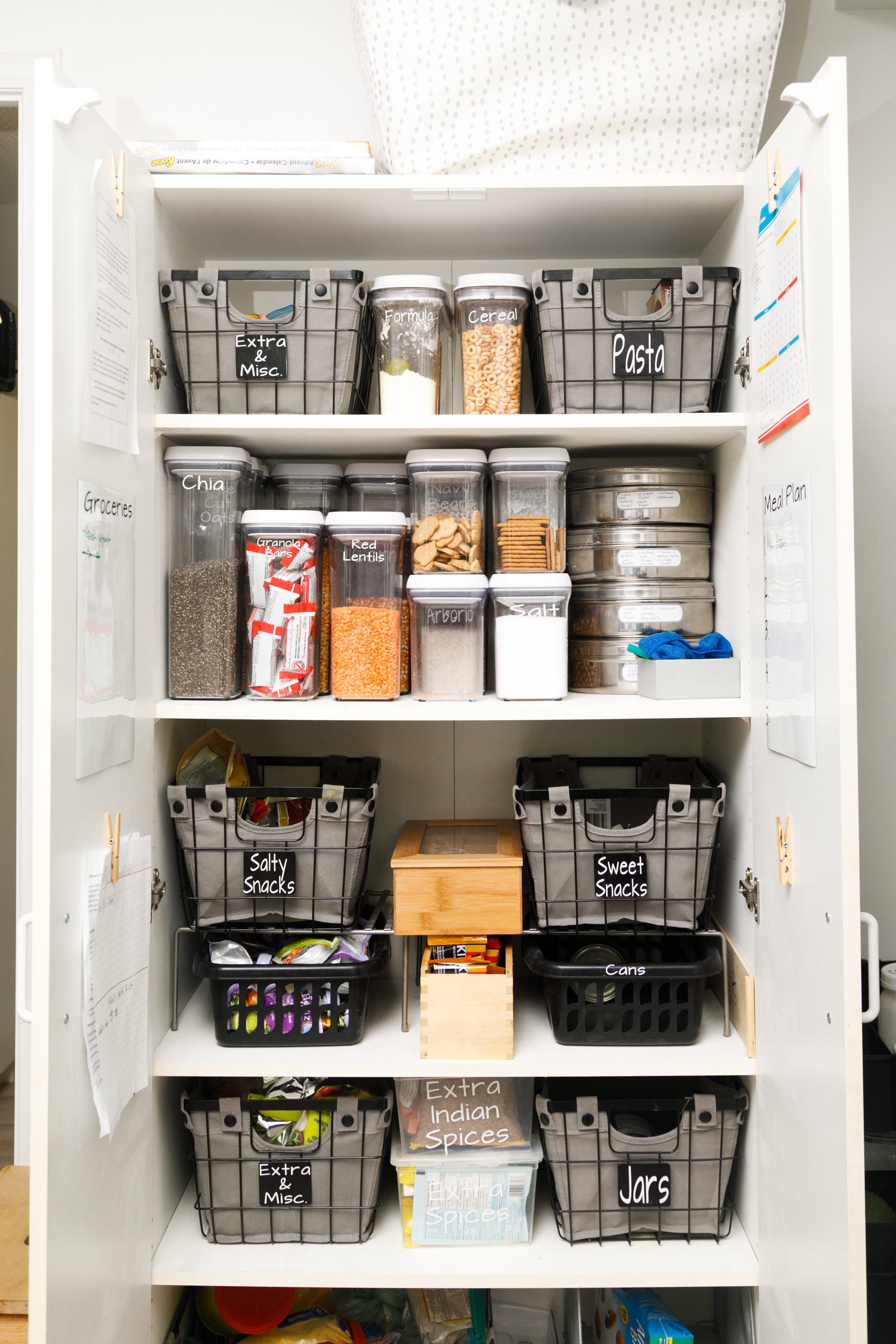 There’s no mudroom, so Vaishali installed mini coat racks for each of the kids: 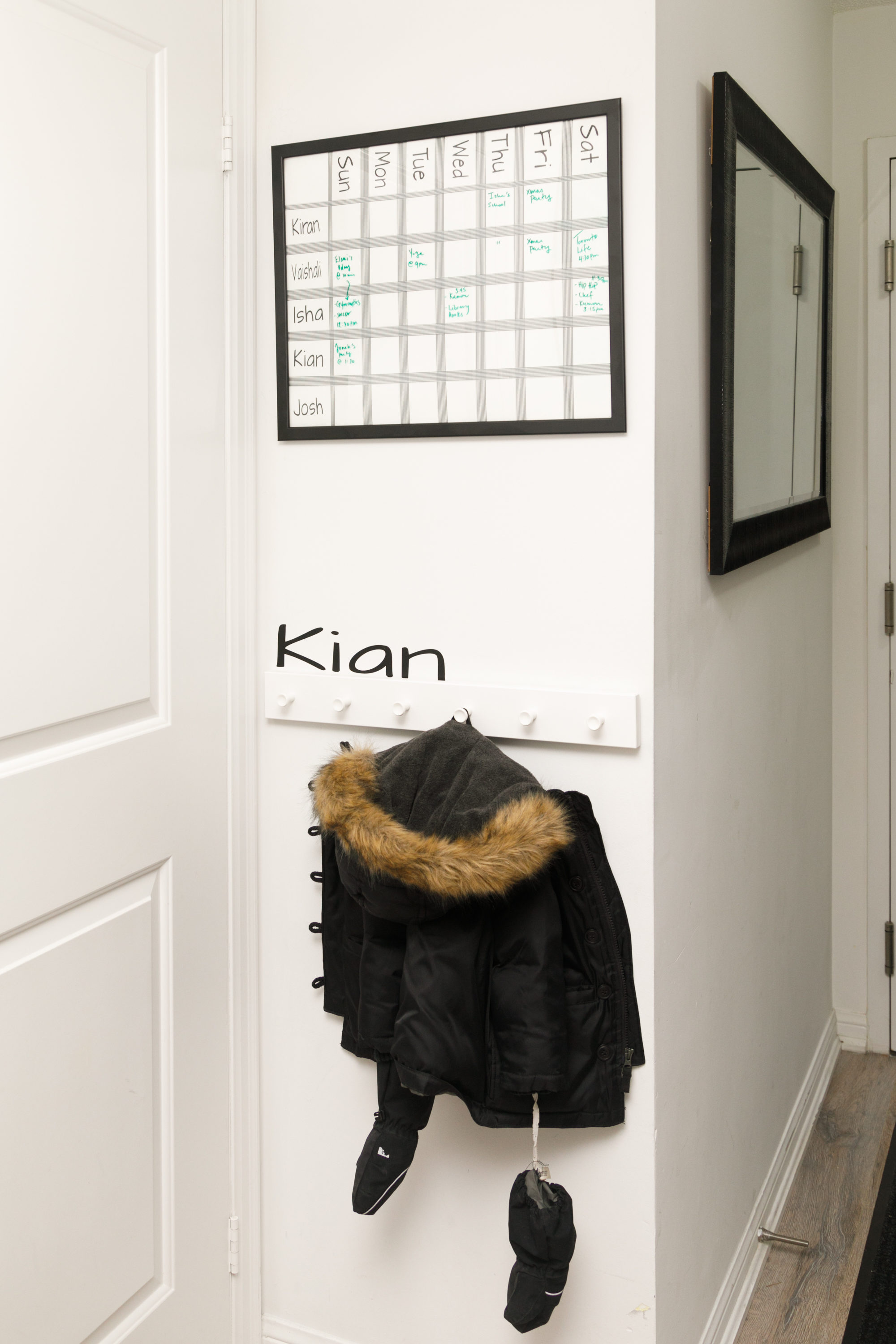 Along with two bedrooms, the condo has a den, which is big enough to fit Josh’s crib: 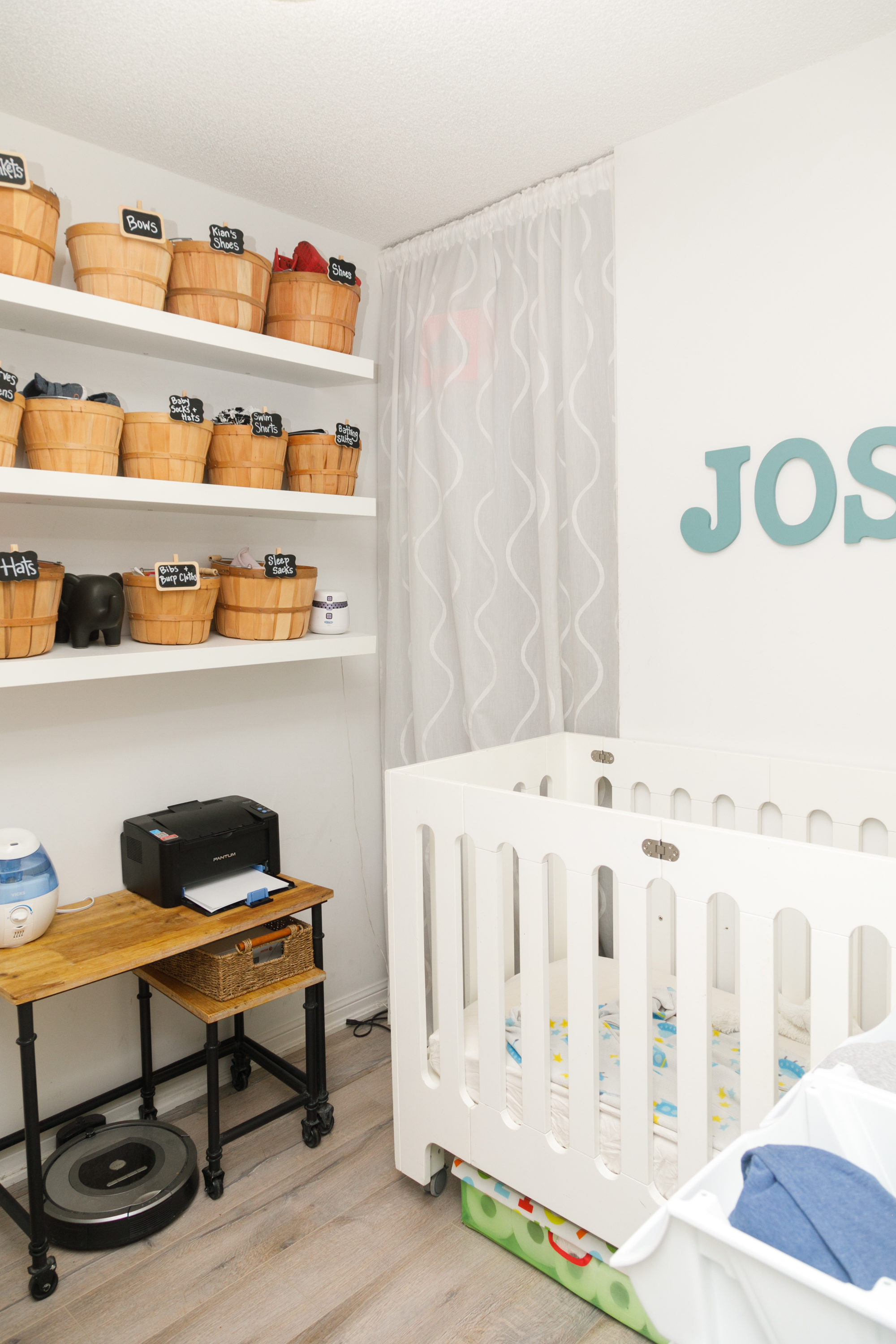 Closet space is limited, so Vaishali stores clothing in baskets on floating shelves: 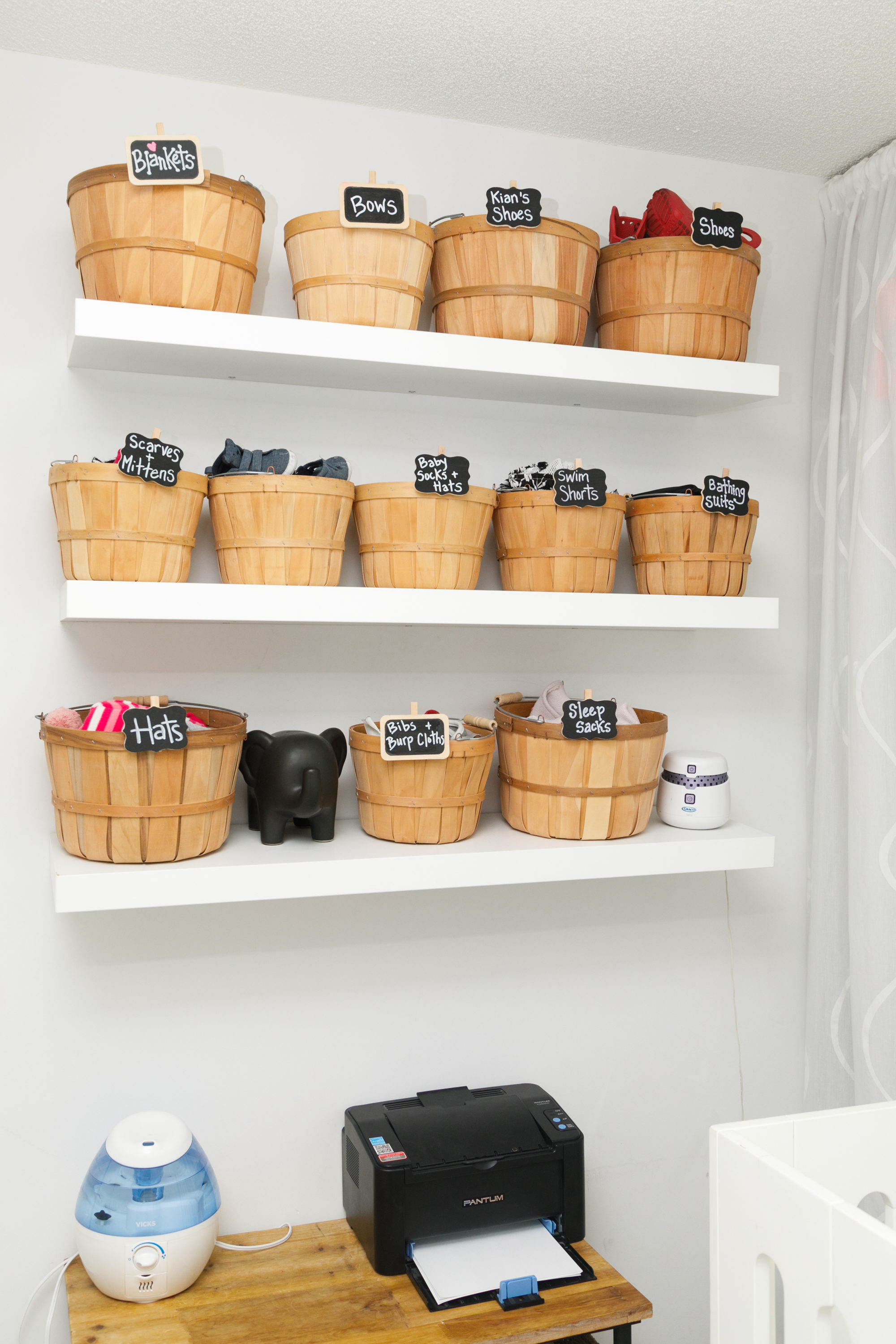 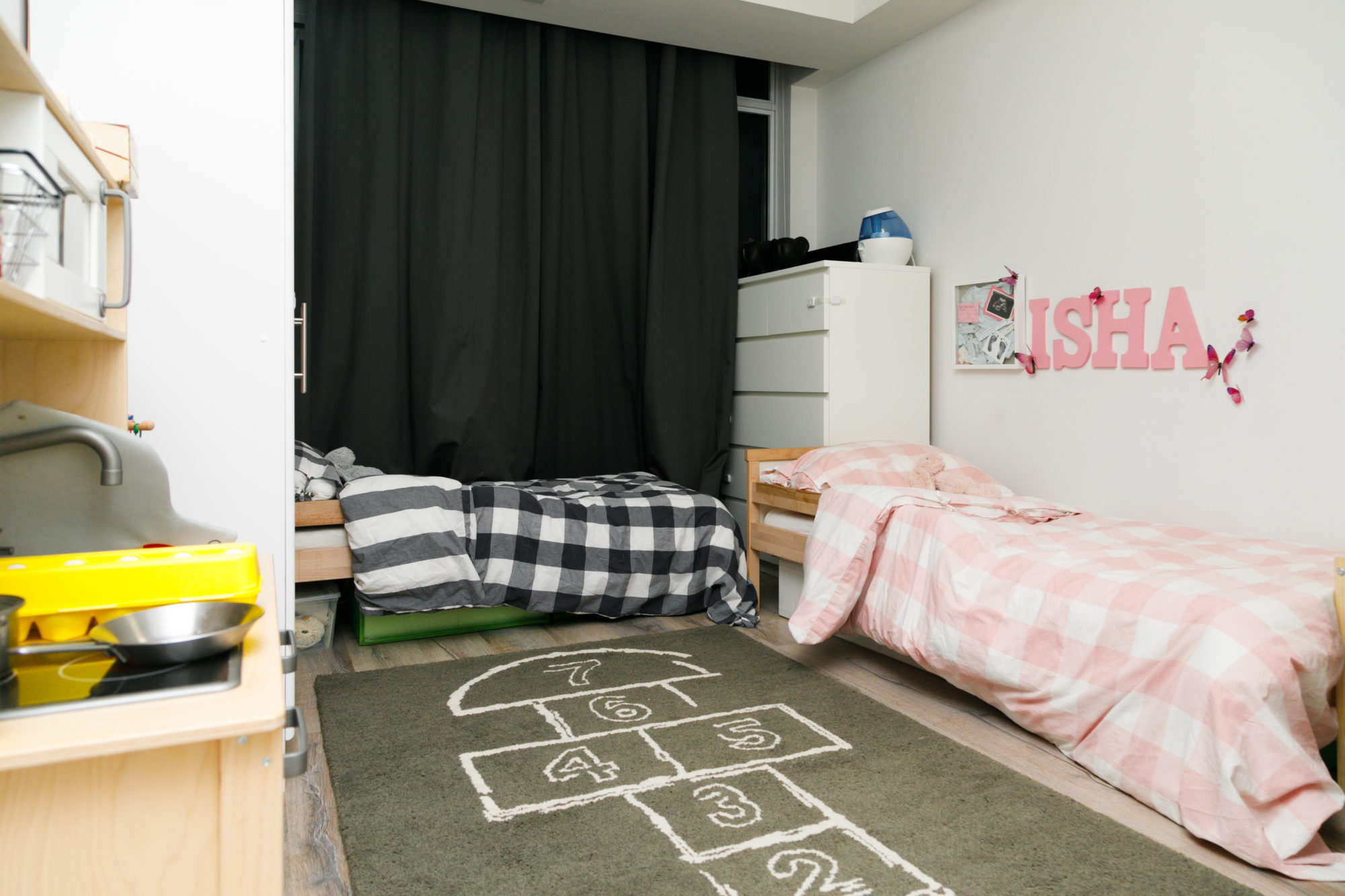 In the master bedroom, there are drawers underneath the bed. The family purges items at least once a month to save space. They also have a policy that if someone buys a new T-shirt, for instance, they have to get rid of an old one. 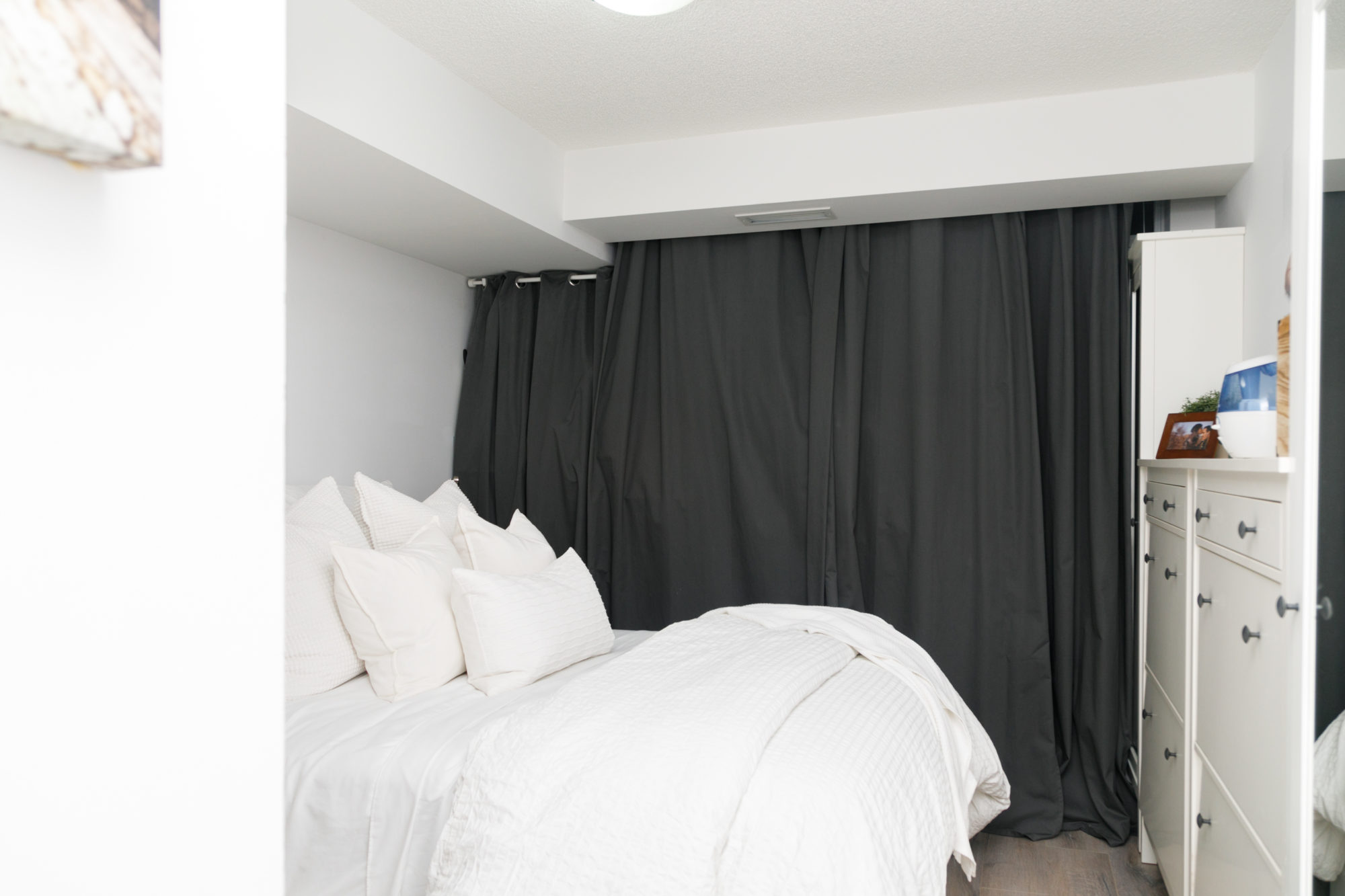 A slim desk provides both functional work space and vertical storage. The kids’ toys are stored in grey felt bins: 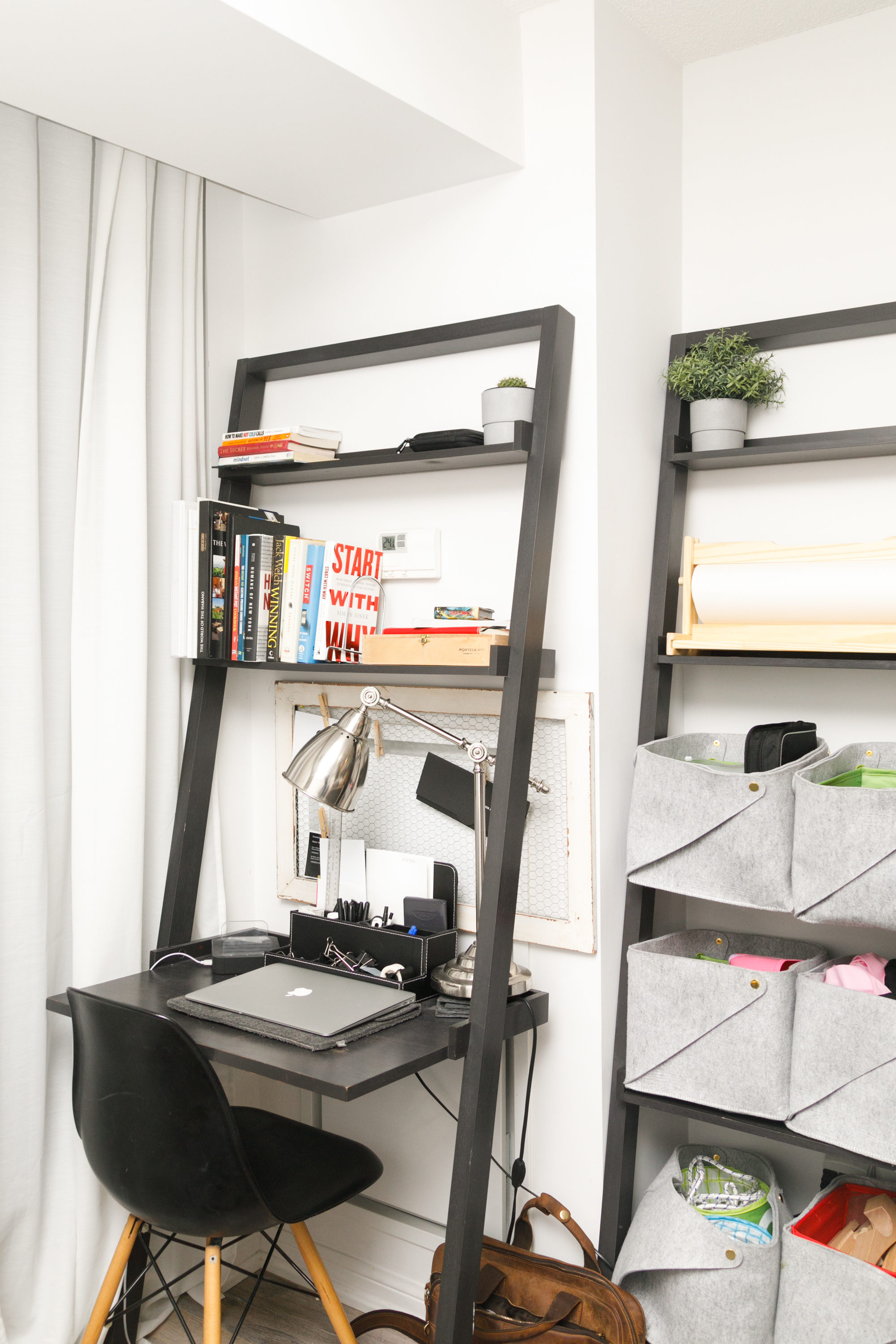