“I feel like I live in a glass treehouse”

Denis bought his pre-construction condo at Yonge and Wellesley in 2014, almost a decade after moving to Toronto from New Brunswick. He liked the boutique developer, Worsley Urban, and the fact that they were reviving a mid-century building in the neighbourhood. “I wasn’t interested in living in a cold, impersonal tower in the sky,” he says. Usually with pre-construction condos, you don’t get to choose your exact suite, but Denis had his heart set on a corner unit with a massive terrace. His agent campaigned for his cause, and Denis secured his dream apartment before closing. While waiting to move in, he lived in a rental bachelor apartment a few streets over on Isabella for five years. In November of 2018, he finally got the keys, and started making it his own.

He was already coming from a small space, so didn’t feel he had to make any sacrifices. Plus, the high ceilings and large windows made the place feel much larger than the square footage suggested. “I feel like I live in a glass treehouse,” he says. When it came to decorating, it was all about making sure every piece he chose had a function. “I didn’t want anything visually heavy,” he says. He tried to infuse the space with as much warmth and character as possible. He bought a wooden island on wheels for the kitchen, and had most of his furniture custom-made so it fit the space perfectly. Now, he finds the apartment feels comfortable rather than staged, and in the summer, when he can use the balcony, he can easily host gatherings of at least 20 people. Here’s a look inside.

There’s a small foyer to the left of the kitchen. Denis loves that the main space is slightly removed from the entrance. “People are surprised with how high the ceilings are and how bright it is. I love seeing their reactions when they turn the corner”: 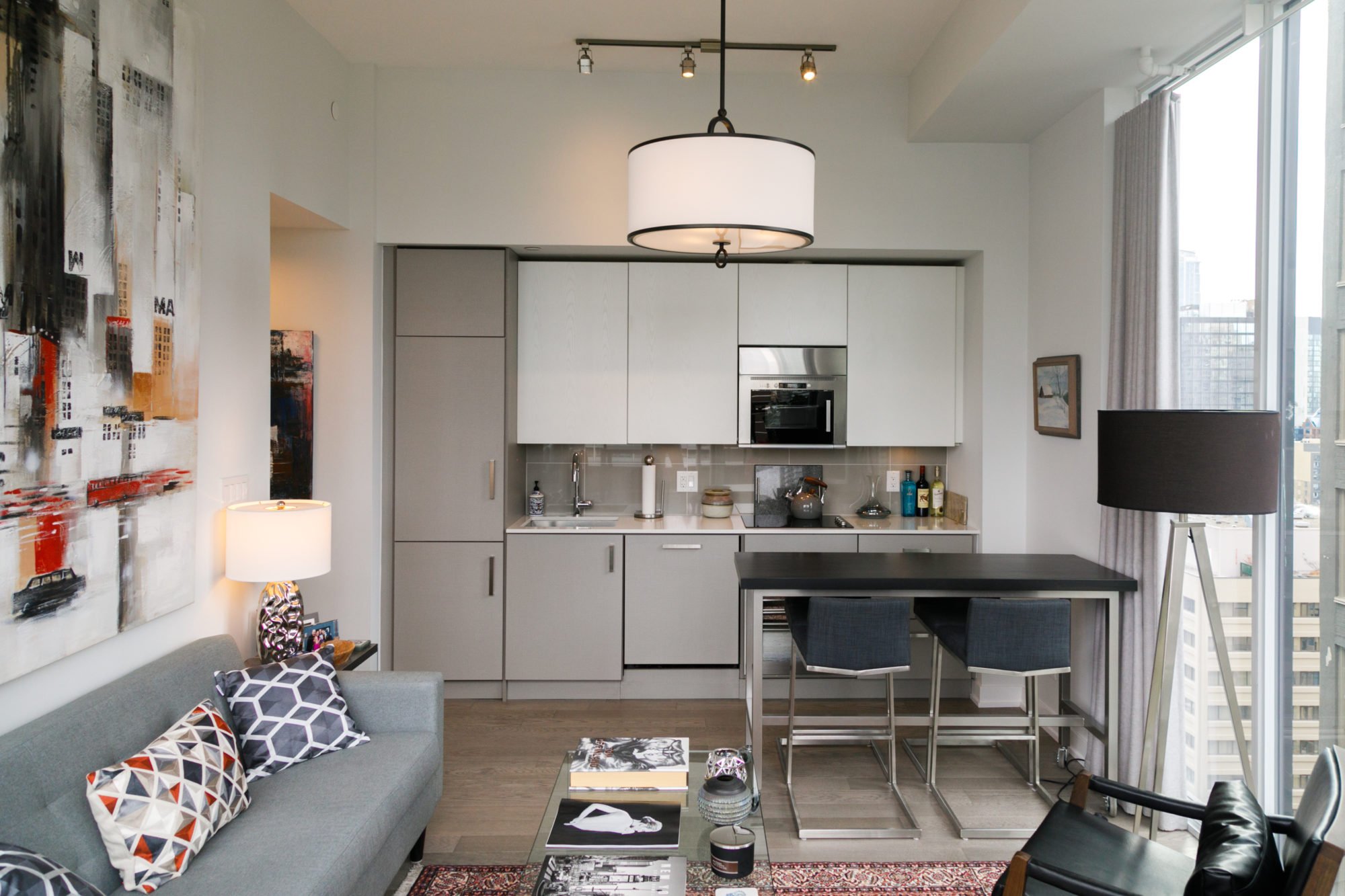 He moves the kitchen island out of the way when he’s hosting a large gathering: 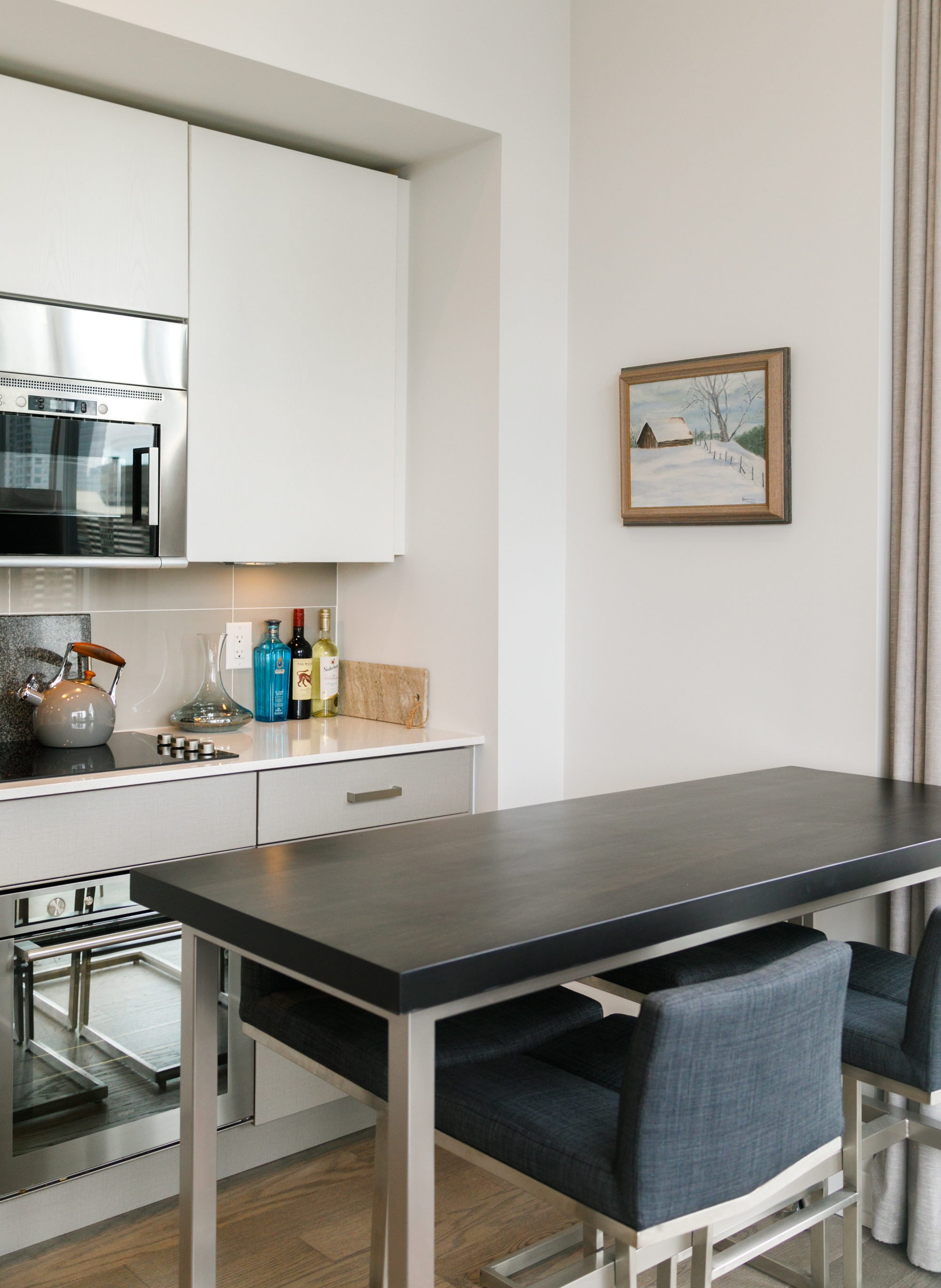 Denis bought the print above the couch from Structube. The balcony is more than 200 square feet, which adds a substantial amount of space in the warmer months: 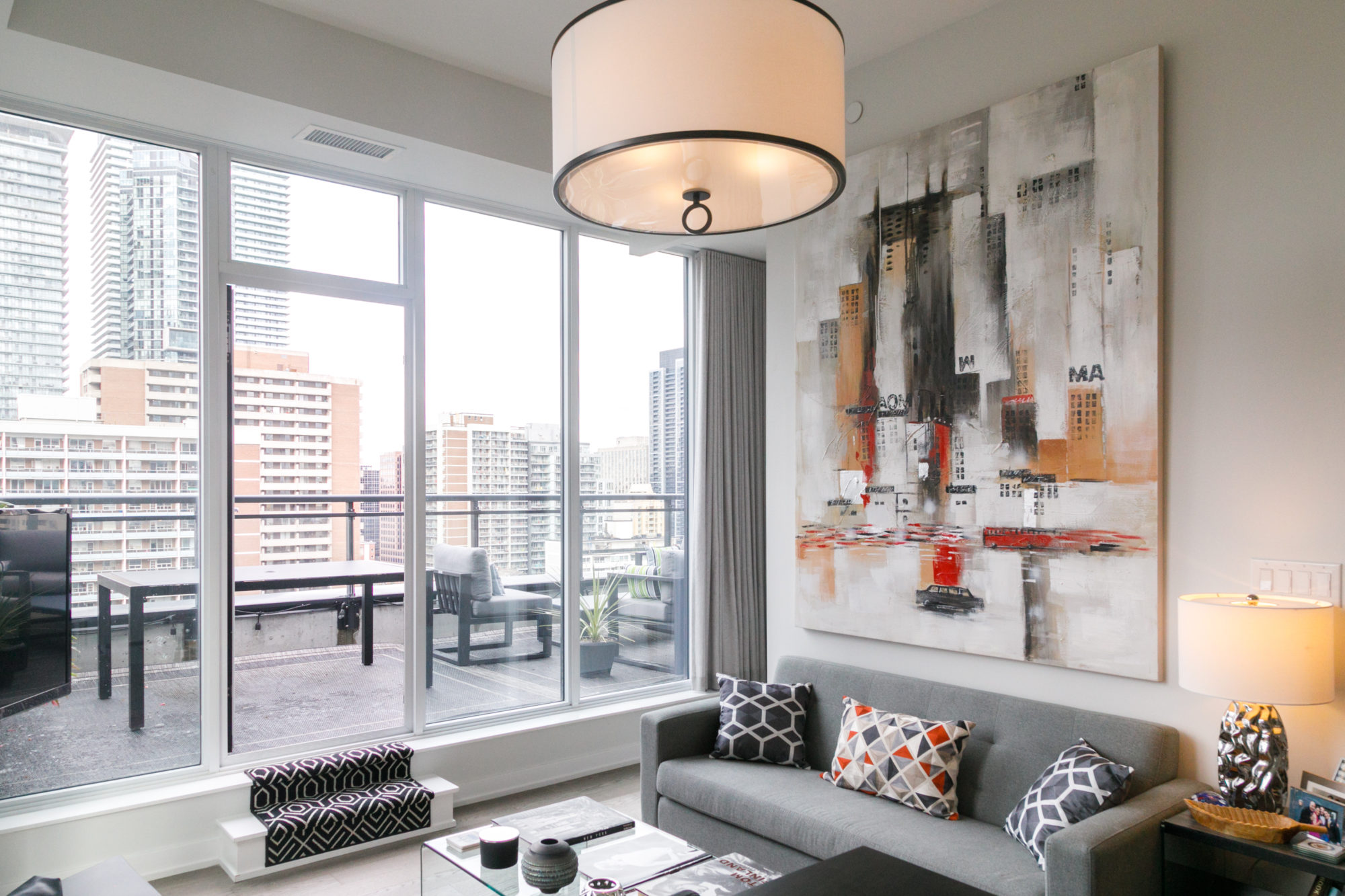 His unit is on the 17th floor, so there’s a nice view: 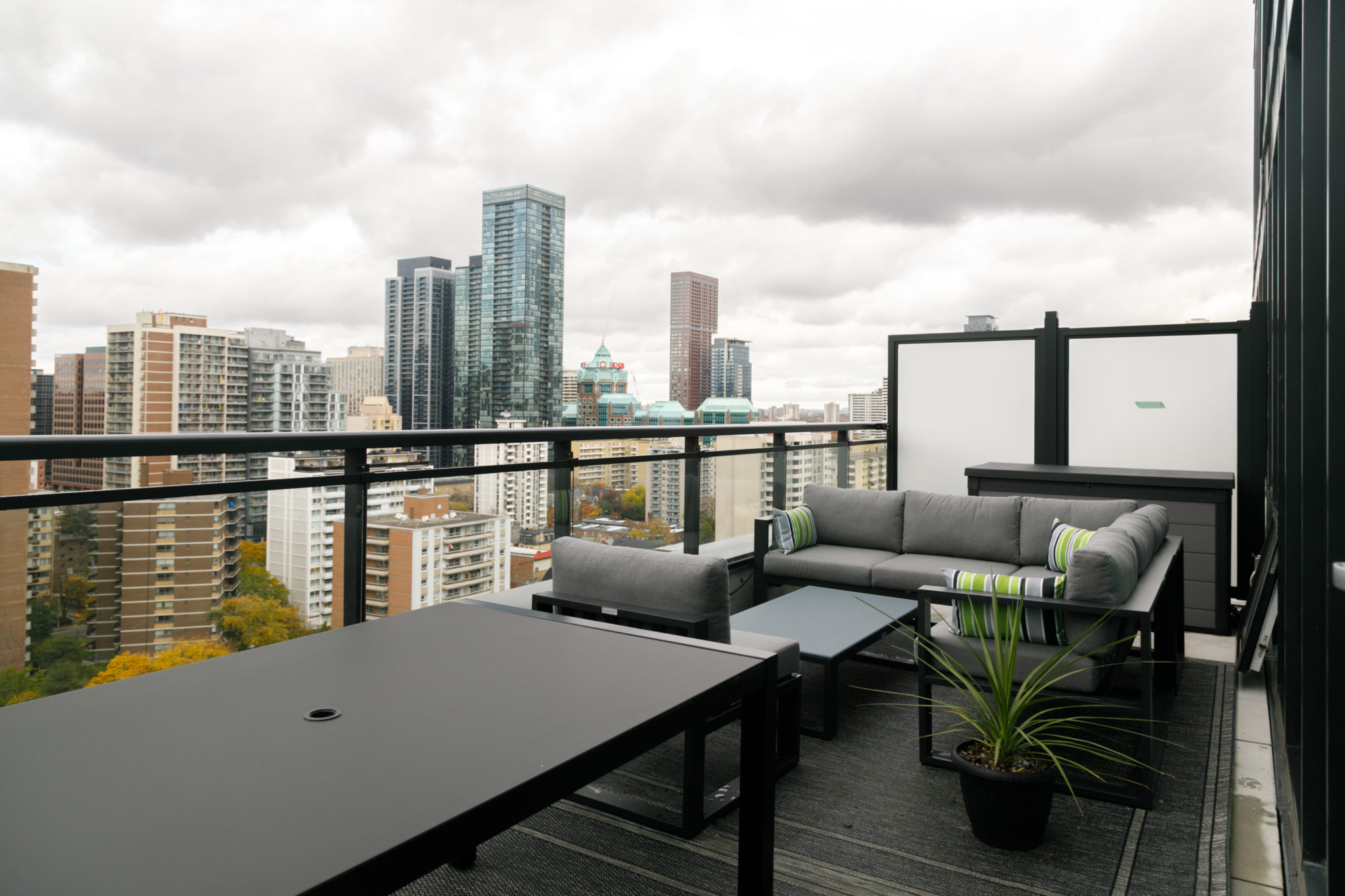 He chose the glass coffee table so it would blend into the room: 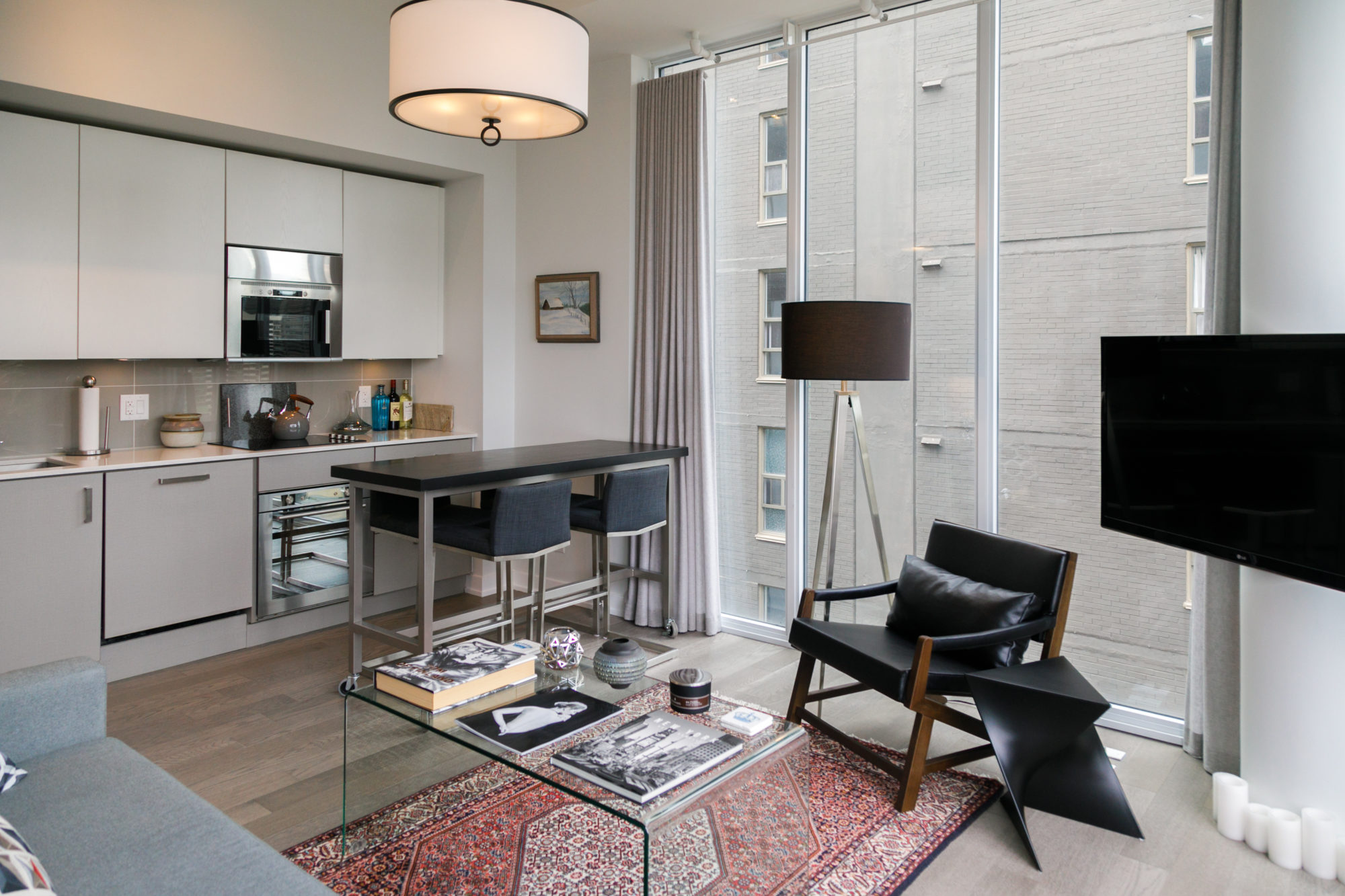 The couch was custom-made for the space: 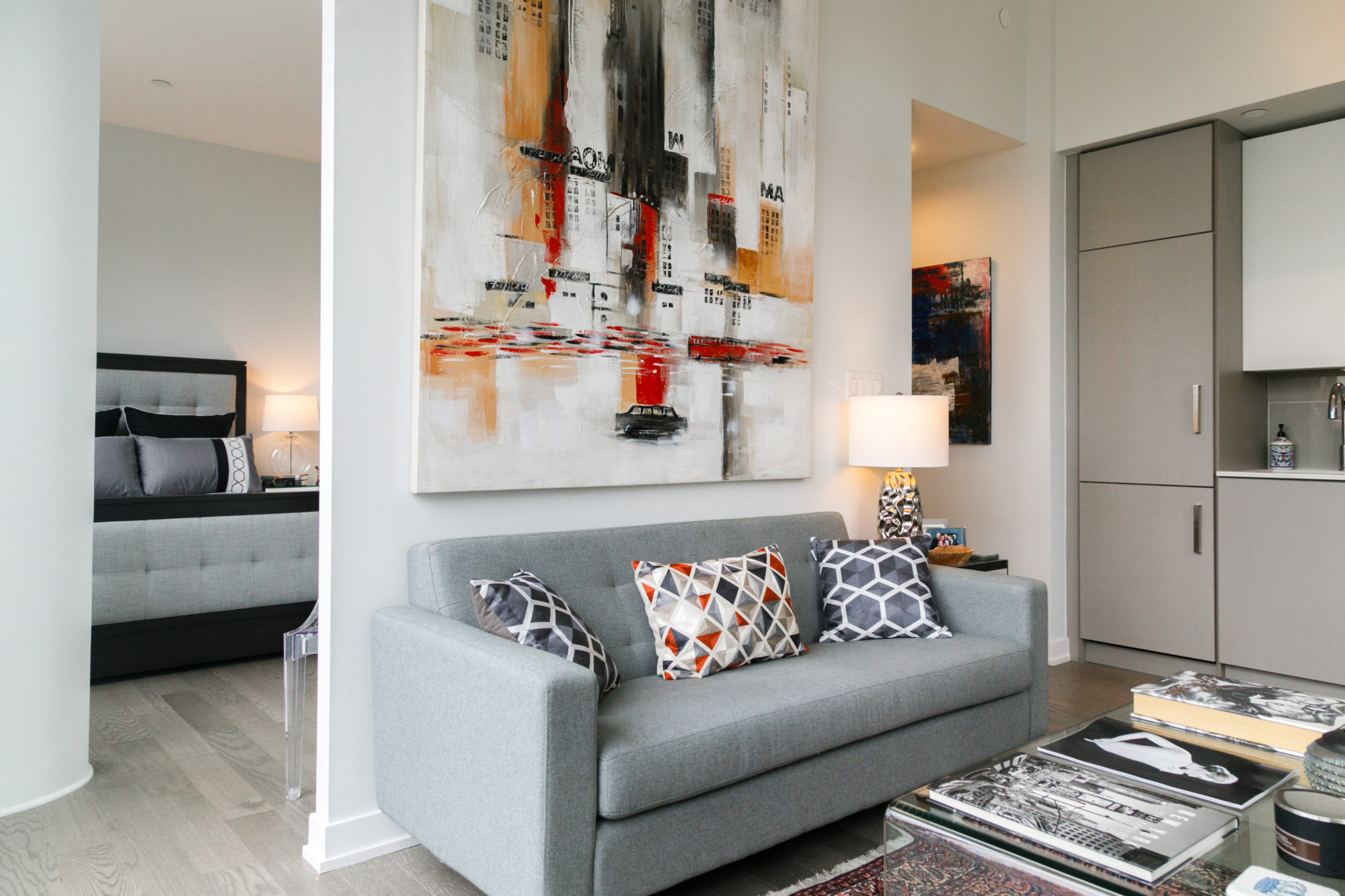 His double bed was also custom-made, with a high headboard and built-in drawers for extra storage. He converted all the lights to LED and added dimmer switches. “Lighting is everything,” he says. 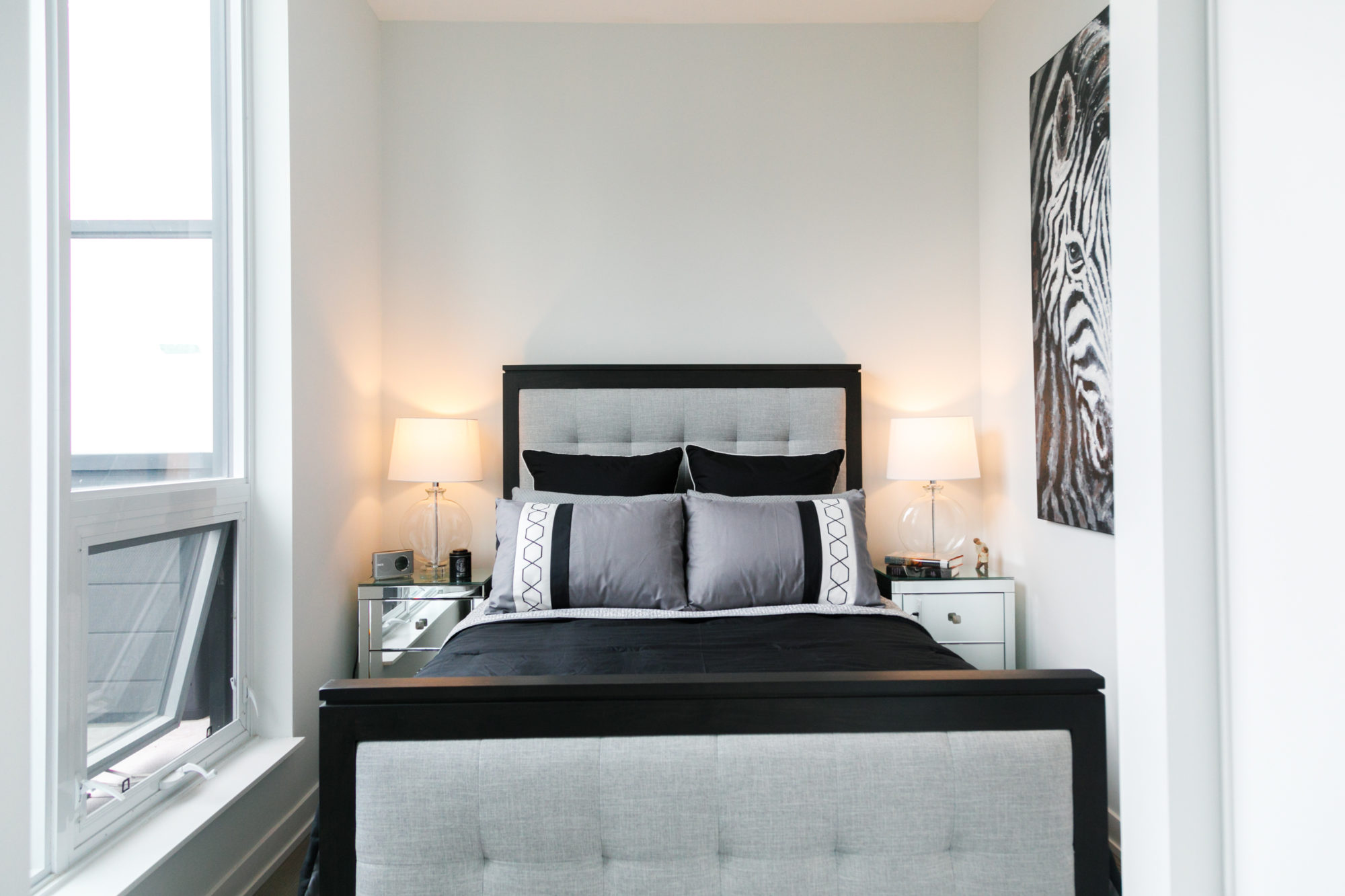