Marissa Fischer and Amir Nazarov, both 29

She’s an associate strategy director for a marketing agency, he’s a pharmacy technician at Sunnybrook Hospital

In 2015, Marissa lived with two roommates in an apartment at Yonge and College, but decided that she wanted her own space. So she looked at a studio apartment in a 30-storey building at Church and Bloor, where a few of her friends already lived. The rent was $900 a month, making it one of the only places within her budget that wasn’t a basement, and she liked that she’d still have friends under the same roof. She signed the lease immediately.

Marissa loved the amount of closet space, which comfortably held her collection of travel-sourced clothes and accessories. She also enjoyed the spacious balcony, where she could barbecue and practise yoga in the summer. The cozy living area was especially manageable because Marissa only spent a few nights a week at home—most evenings she’d be at workout classes or at dinner with friends.

Then her partner, Amir, moved in with her in 2019, making the cramped quarters even tighter. In early 2020, they started hunting for something more spacious, but decided to hold off when Covid-19 hit.

Marissa has been working from home since March 11. At first, she was excited at the prospect of a more relaxed workday. “My Instagram feed was filled with people baking sourdough bread and sleeping in,” she says. Although the elimination of daily commuting and face-to-face meetings has resulted in a less hectic schedule, Marissa is still adjusting to the lack of separation between work and home life. During the first few days, she filled her spare time with productive tasks like reorganizing the drawers or doing taxes, but before long, the novelty wore off and she found herself binge-watching more Netflix than usual.

Amir is working long hours at Sunnybrook Hospital’s pharmacy, which gives Marissa some extra space during the day. “I can’t imagine what it would be like if we were both working from home,” she says. During the week, she works at the kitchen table. She’s staying sane by taking her yoga mat onto the balcony for some fresh air at around 4 p.m., when the west-facing deck gets the most sunlight. On pre-quarantine weekends, she and Amir would café-hop to source the city’s best croissants. Now, they’re settling for grocery-store croissants, which they’ll grab on weekly runs to No Frills or Eataly, before ranking their favourites at home. “We’re trying our best to maintain a regular routine, while taking social distancing seriously,” she says.

After moving in, Marissa painted gold polka dots on the wall behind the bed: 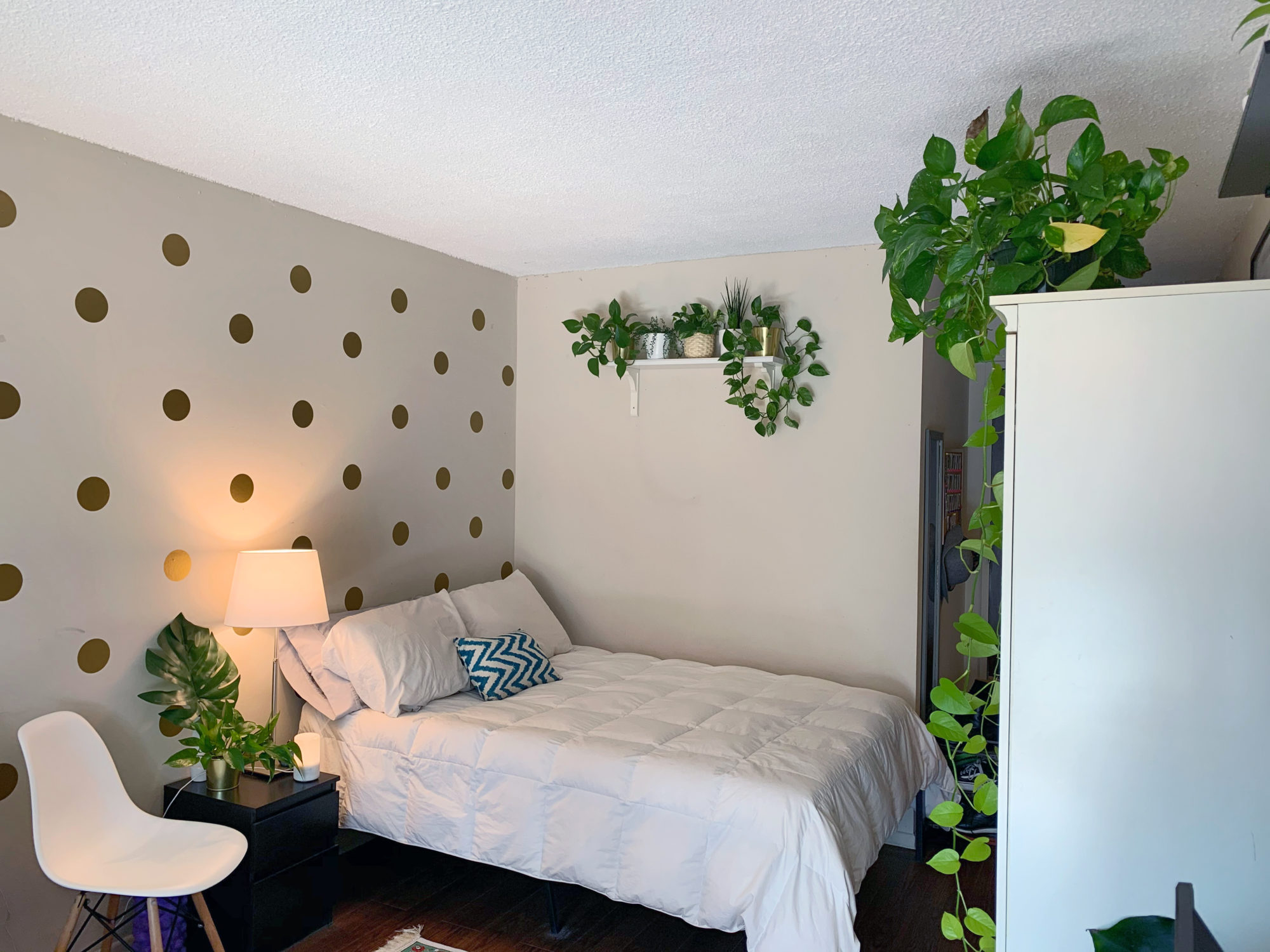 The situation has forced Marissa to cook more often. Pre-quarantine, her and Amir would order Uber Eats most evenings. Now, she makes her own citrus juice every morning, and they grill meat and fish on the balcony: 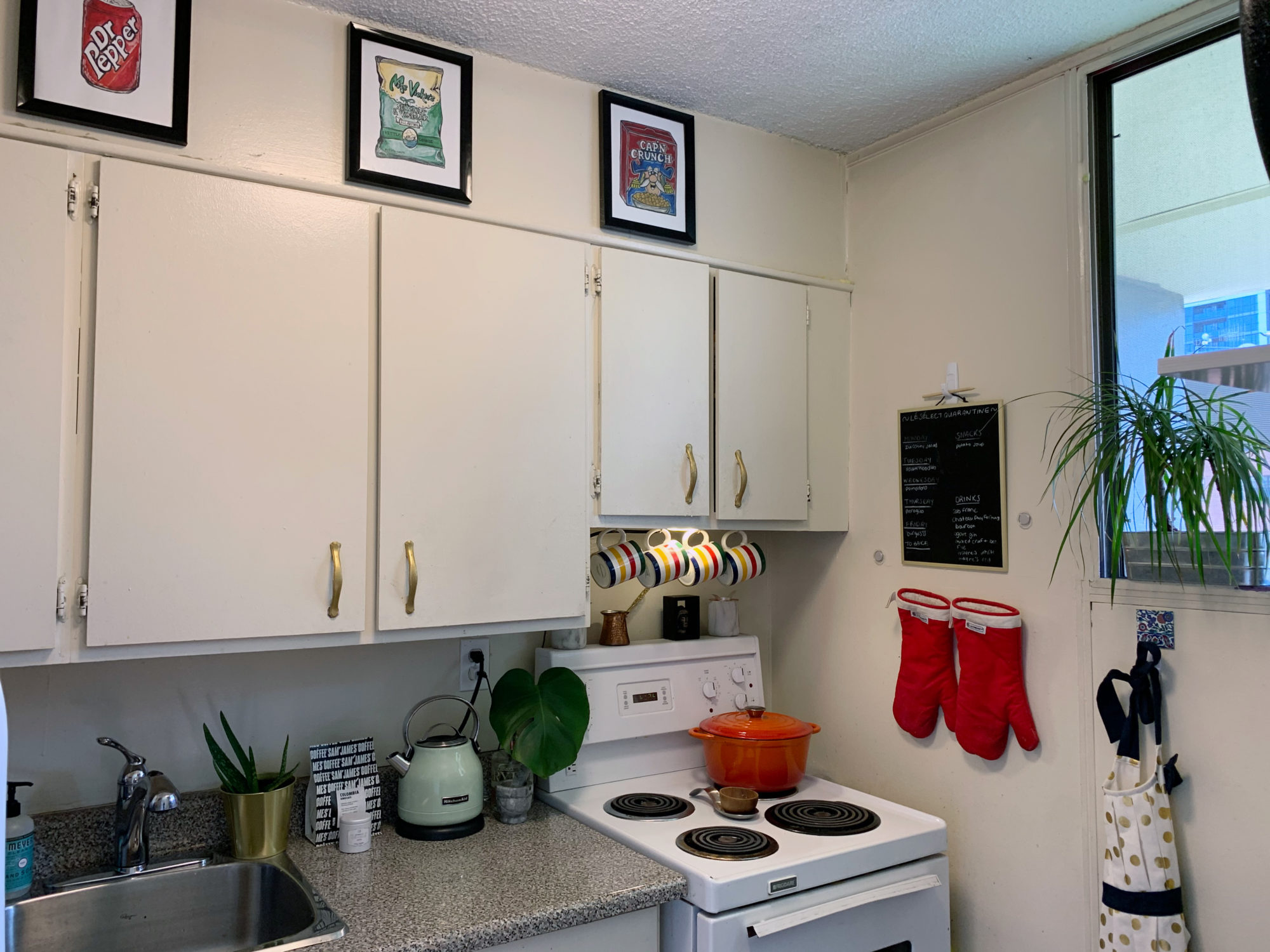 Here’s Marissa’s makeshift workstation. It’s also a bar, which Marissa admits is getting more use during self-isolation. She’s been stress-buying fresh flowers lately to help the place feel even homier: 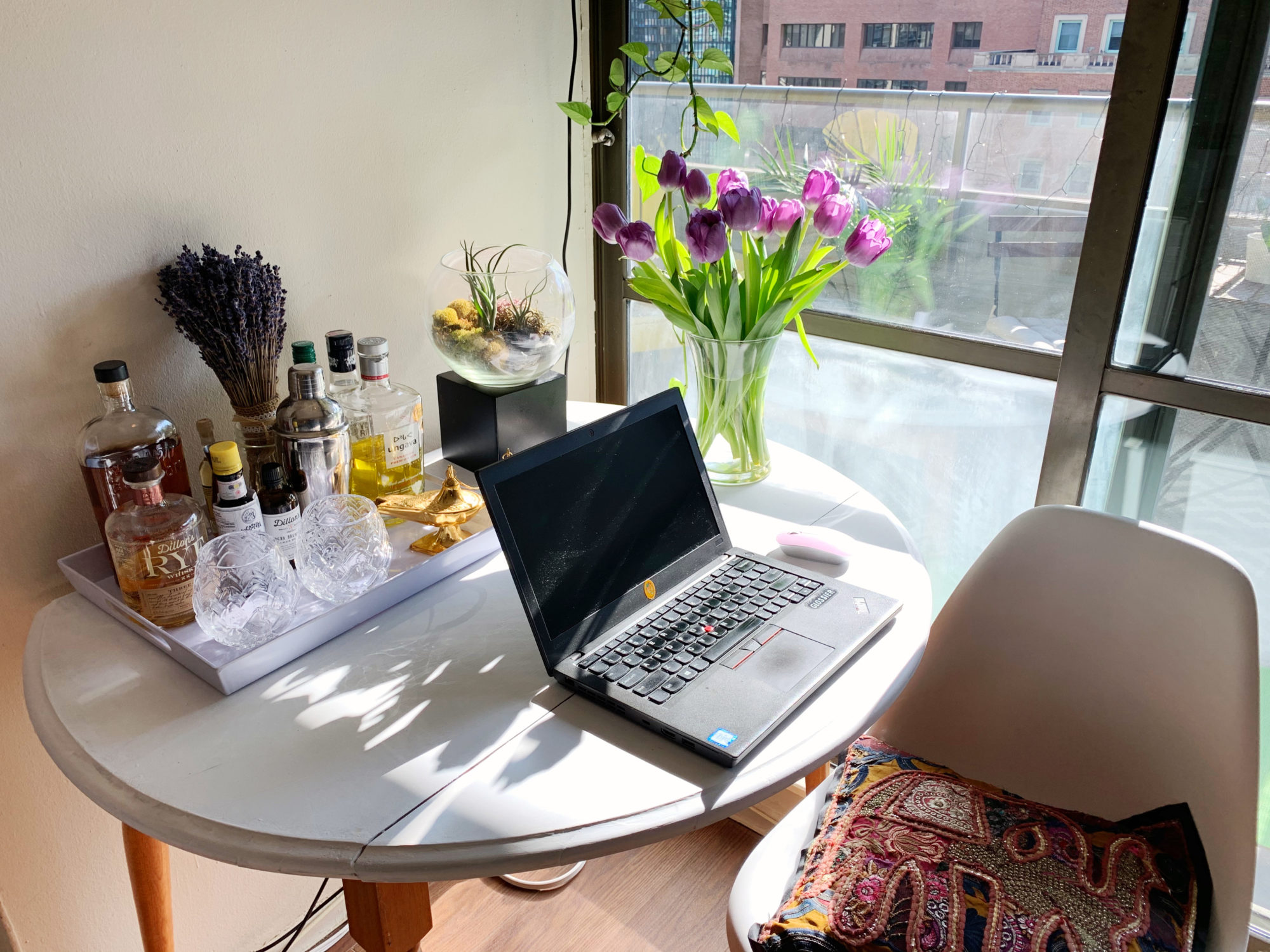 Here’s the view from the bed. Marissa is an avid plant parent: 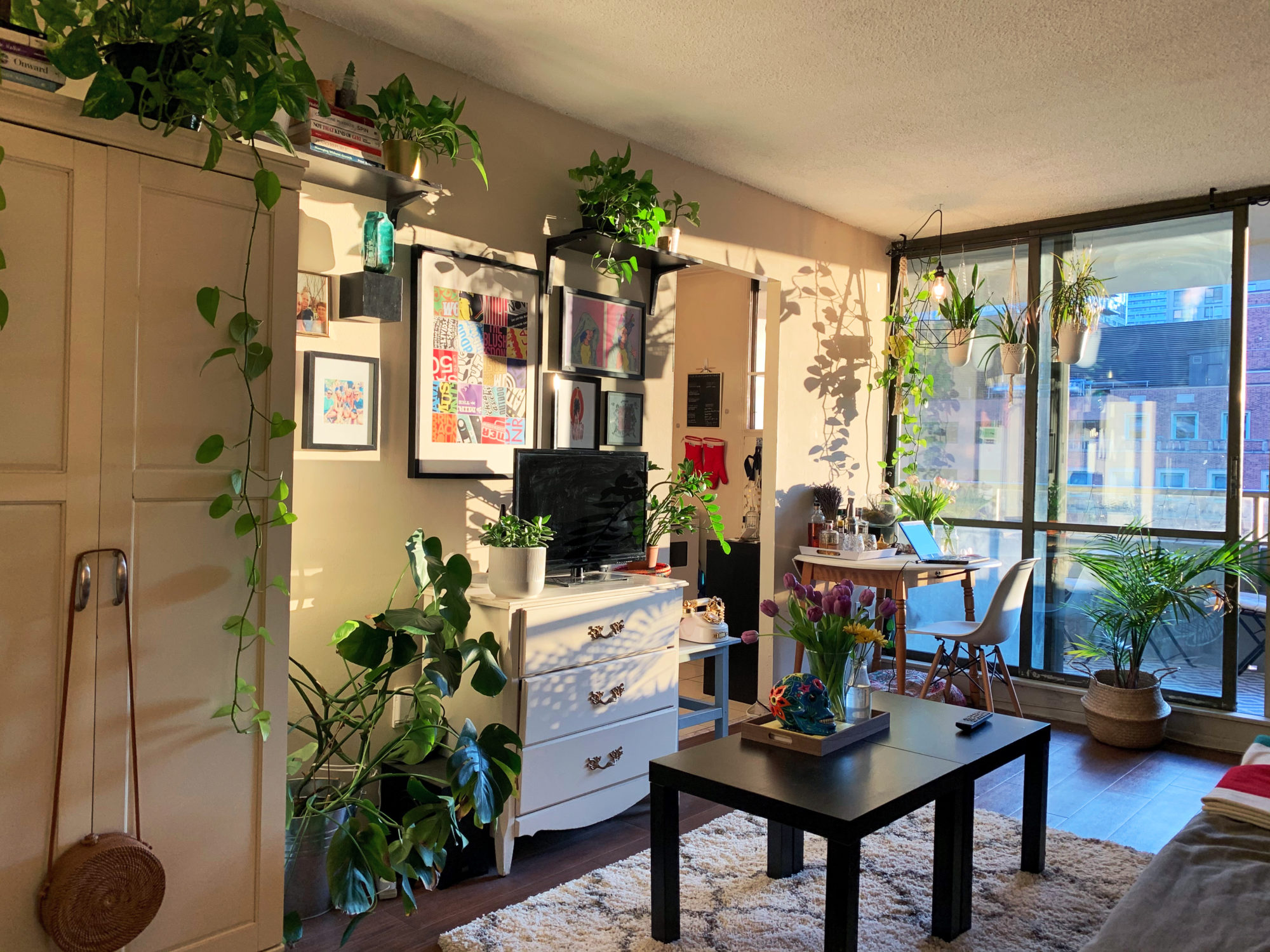 The TV sits atop a chest of drawers, where they keep loungewear and other casual clothing. Since the kitchen table is now an office, Marissa and Amir eat most of their meals on the sofa: 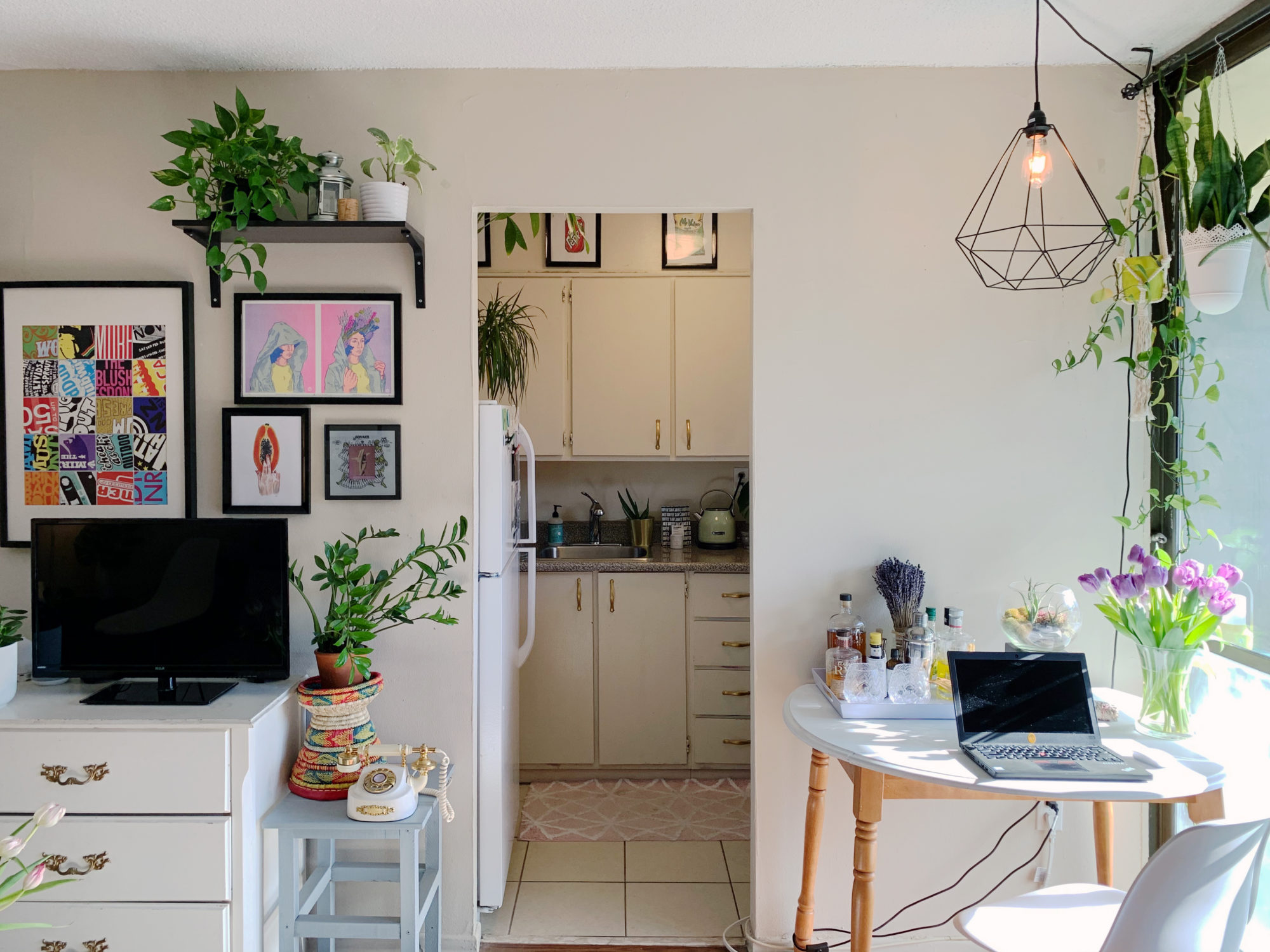 Here’s the balcony, which has been a lifesaver for Marissa during self-isolation, especially now that the weather is warming up: 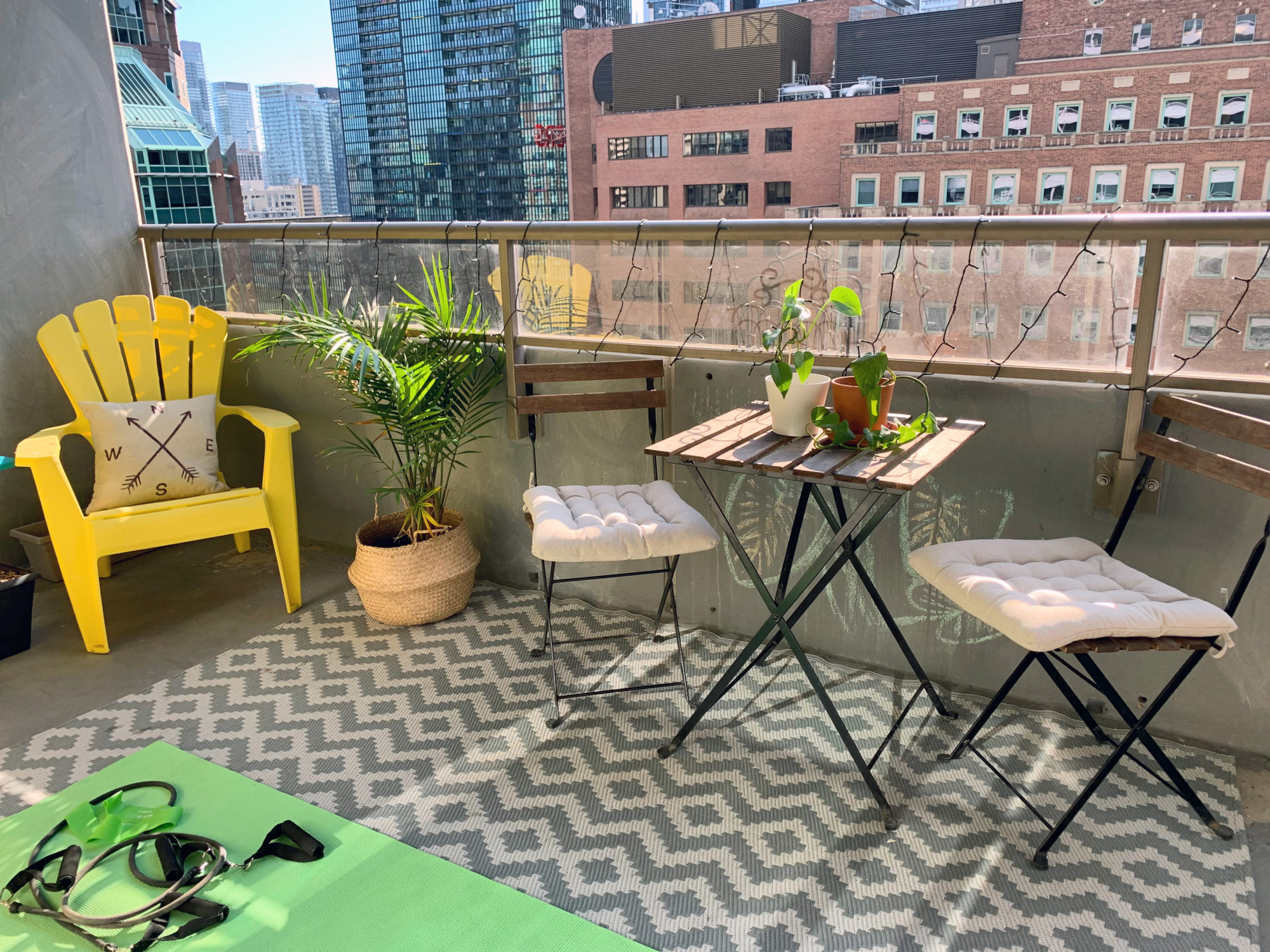 Are you self-isolating in a small space? We want to talk to you.