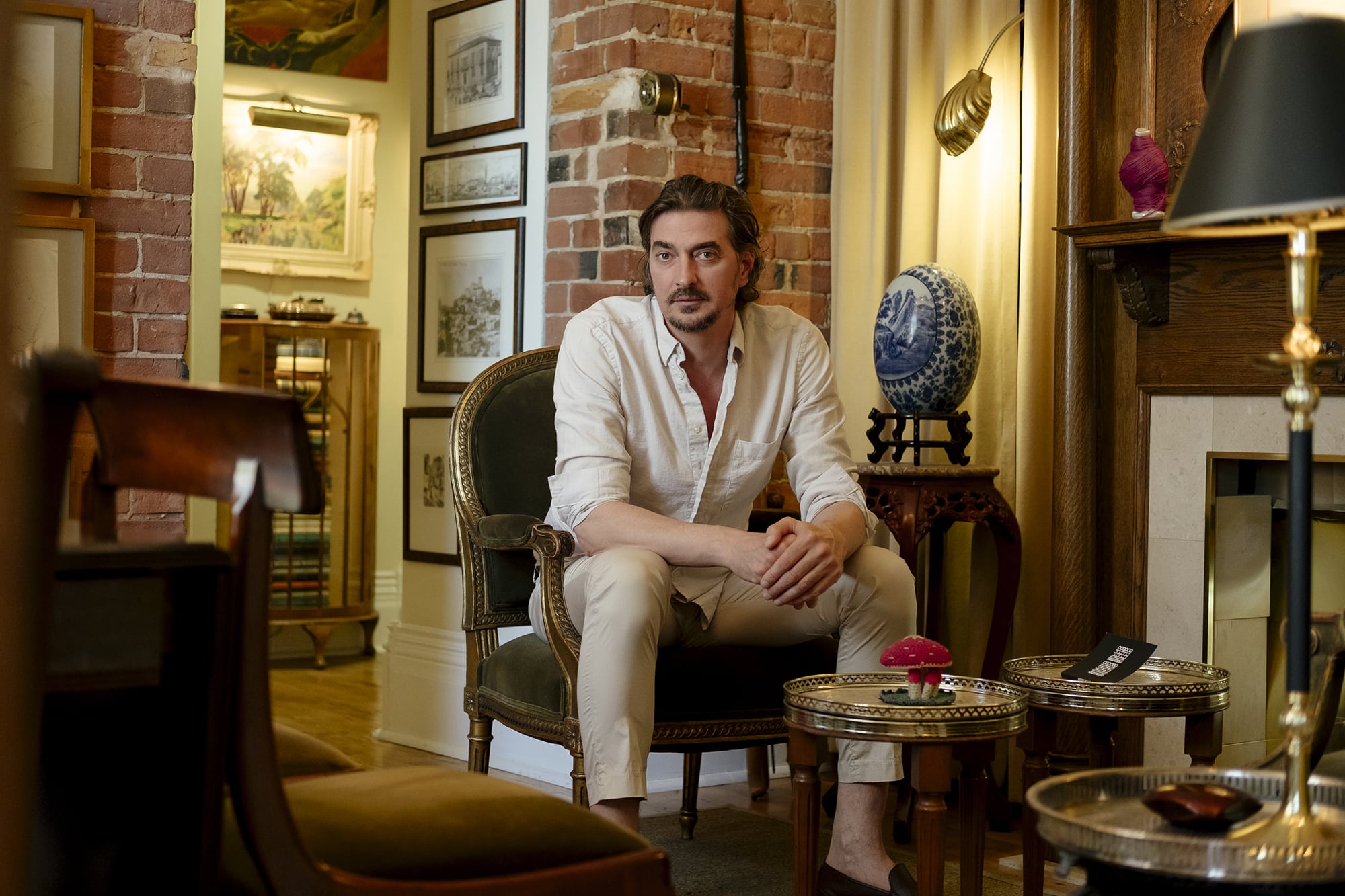 Where: The Gladstone Hotel, at Queen and Gladstone
How much: $1,000 per month
How big: 350 square feet

About 15 years ago, when a malfunctioning boiler jumpstarted the head-to-toe restoration of the Gladstone Hotel, owner Christina Zeidler started toying with the idea of having a resident artist around. At that same time, Toronto native Bruno Billio was returning to Toronto from a four-year stint in the U.K. He landed the artist-in-residence gig, which involves participating in the hotel’s annual Come Up to My Room exhibition, giving occasional tours and hosting dinners and studio visits. As a perk of the job, he took up residence in a second-floor suite in the building. “There’s nothing else like this in the country,” Bruno says. “I don’t have any aspirations to move to a big house.”

The tiny four-room hotel apartment easily accommodates his art materials, along with everything else he needs. A cozy foyer leads into a fully functional kitchen about two feet wide. Whenever Bruno feels like a change in scenery, he just adjusts the lighting and rearranges his chairs. In this way, it’s relatively simple for him to transform his main hall into a dining room or cocktail space.

The kitchen’s high ceilings allow for some storage space above the cupboards. Bruno keeps his candelabras there when they aren’t being used. He tends to buy fresh food only as he needs it, so he can get by with a small fridge hidden under the kitchen counter: 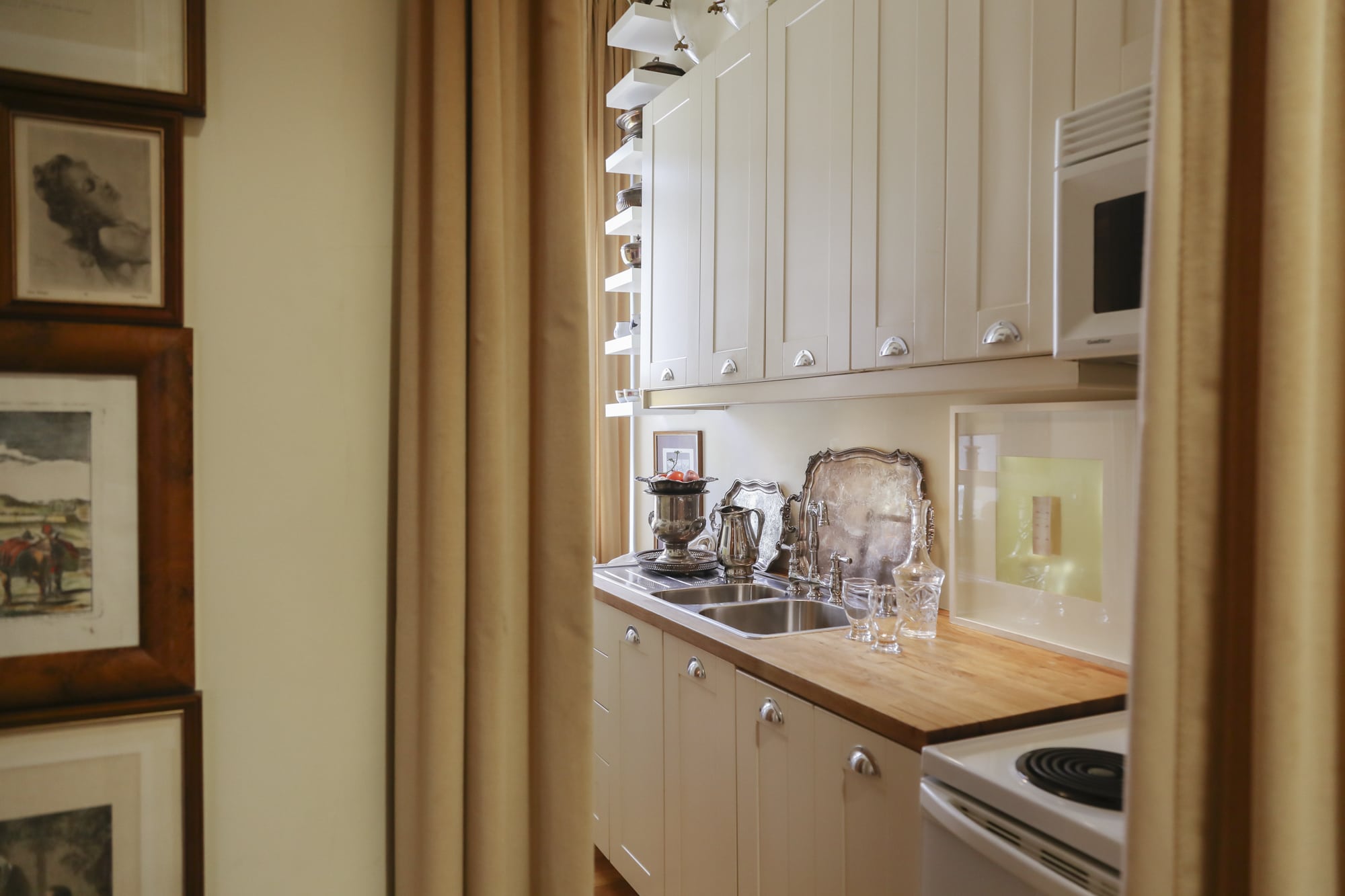 Curtains behind the fireplace hide some storage shelves, and the mantel is perfect for displaying art. The fireplace isn’t functional, but Bruno will sometimes put candles in there to give the space a warm appearance. He salvaged the oak surround from a friend’s basement: 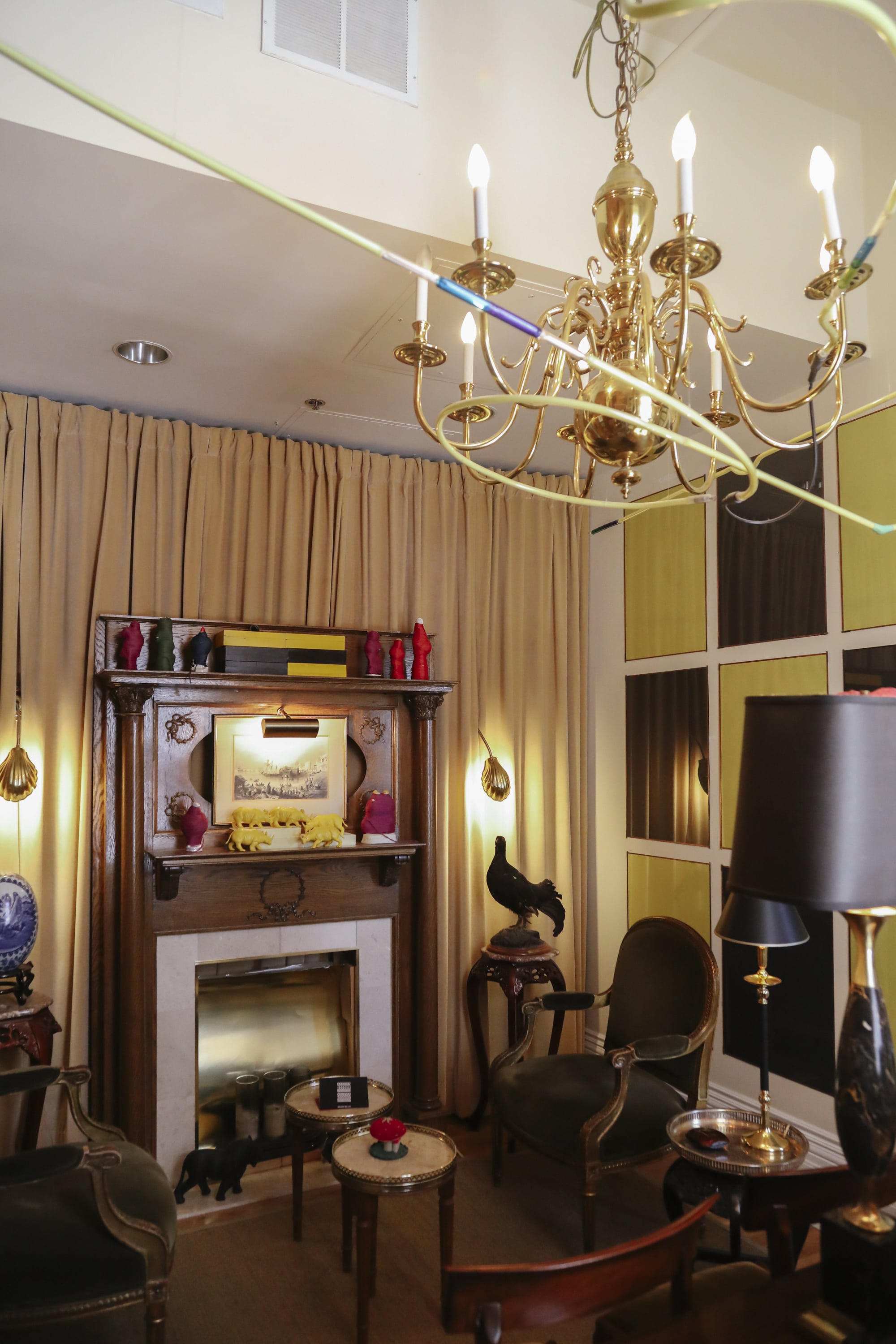 The living room has eight chairs and a table that Bruno can extend when he has guests, which he often does. He can fit as many as 15 people. “Great company makes the space work,” he says. A multitude of different lighting fixtures, including chandeliers and neon, allow him to set the perfect mood, no matter the occasion: 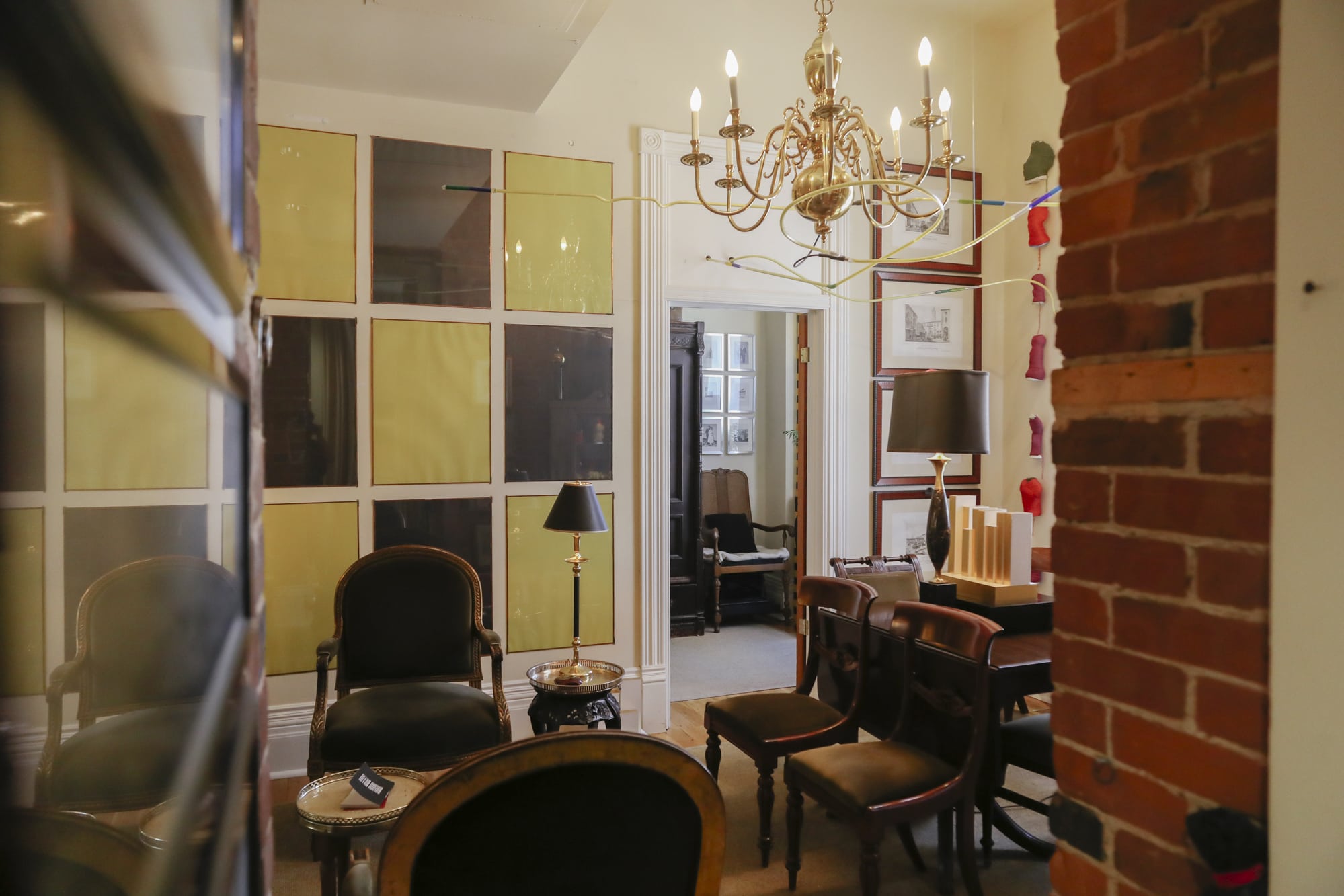 Bruno uses the space as an art studio. He says it’s more than adequate, but the tight quarters are not without their creative difficulties. “I once did a series involving glitter,” he says. “My life became full of glitter. Years later, the carpet may be brand new, but I’m still finding glitter under it.” 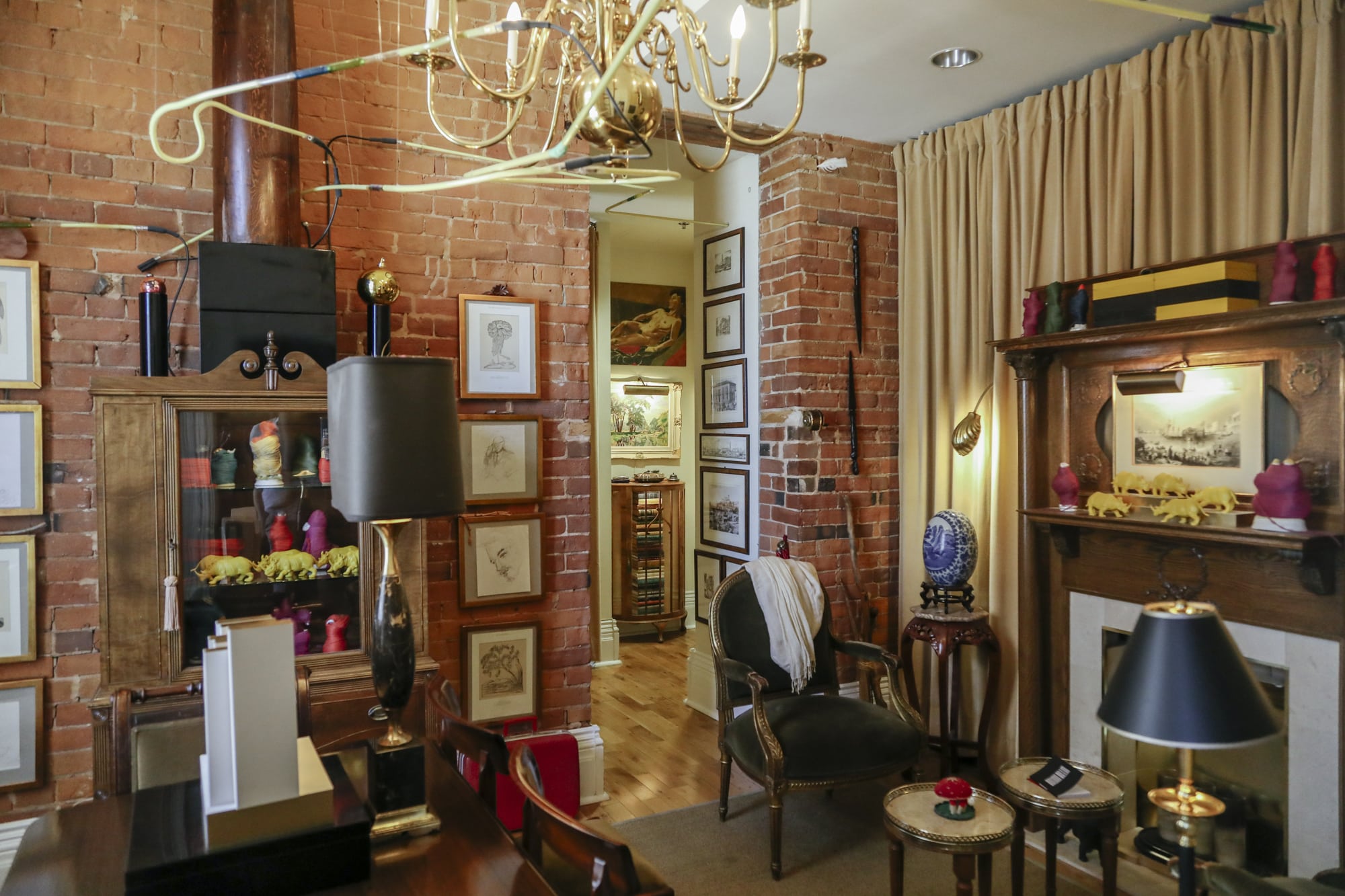 Bruno has been working on the decor for years. The figurines wrapped in string and hanging from the walls are his personal take on bomboniere, commemorative ornaments traditionally given out during important events like marriages or communions in Italian culture. The string is made of re-dyed fishing nets salvaged by one of his friends. Each object takes an hour or two to bind. Bruno says that the process allows the figurines to tell him their stories: 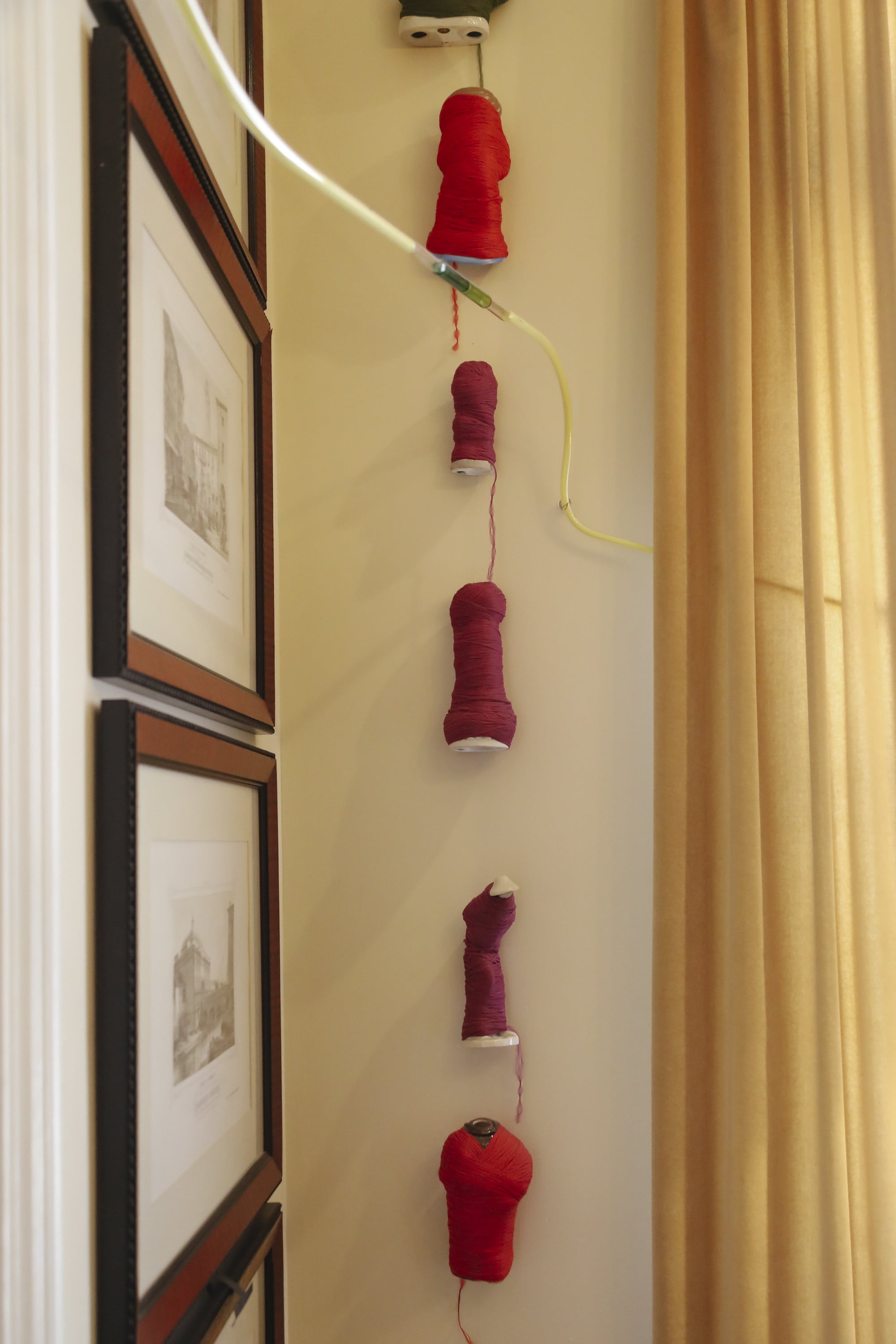