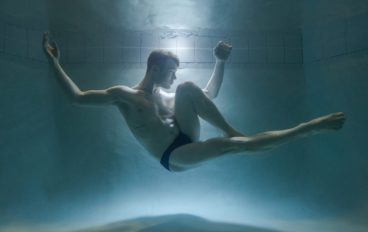 When Lucas Murnaghan was a kid, he wished he had a superpower: the ability to breathe underwater. It was an early hint at the dazzling photo series that he would create more than three decades later. An orthopaedic surgeon at SickKids by day and photographer by night, Murnaghan, now 42, has amassed more than 100,000 Instagram followers with his pictures of athletes, surfers and dancers, artfully submerged in pools, lakes and oceans.

“When I was a kid, I would go underwater and pretend to be in another world,” he says. “Somewhere in our adulthood, we decided to just stand around the pool and try to look nice.” With his photos, Murnaghan tries to revive that adventurousness and foolishness, giving his models a space to express themselves without fear of being judged. Here, the stories behind eight of his stunning aquatic portraits. 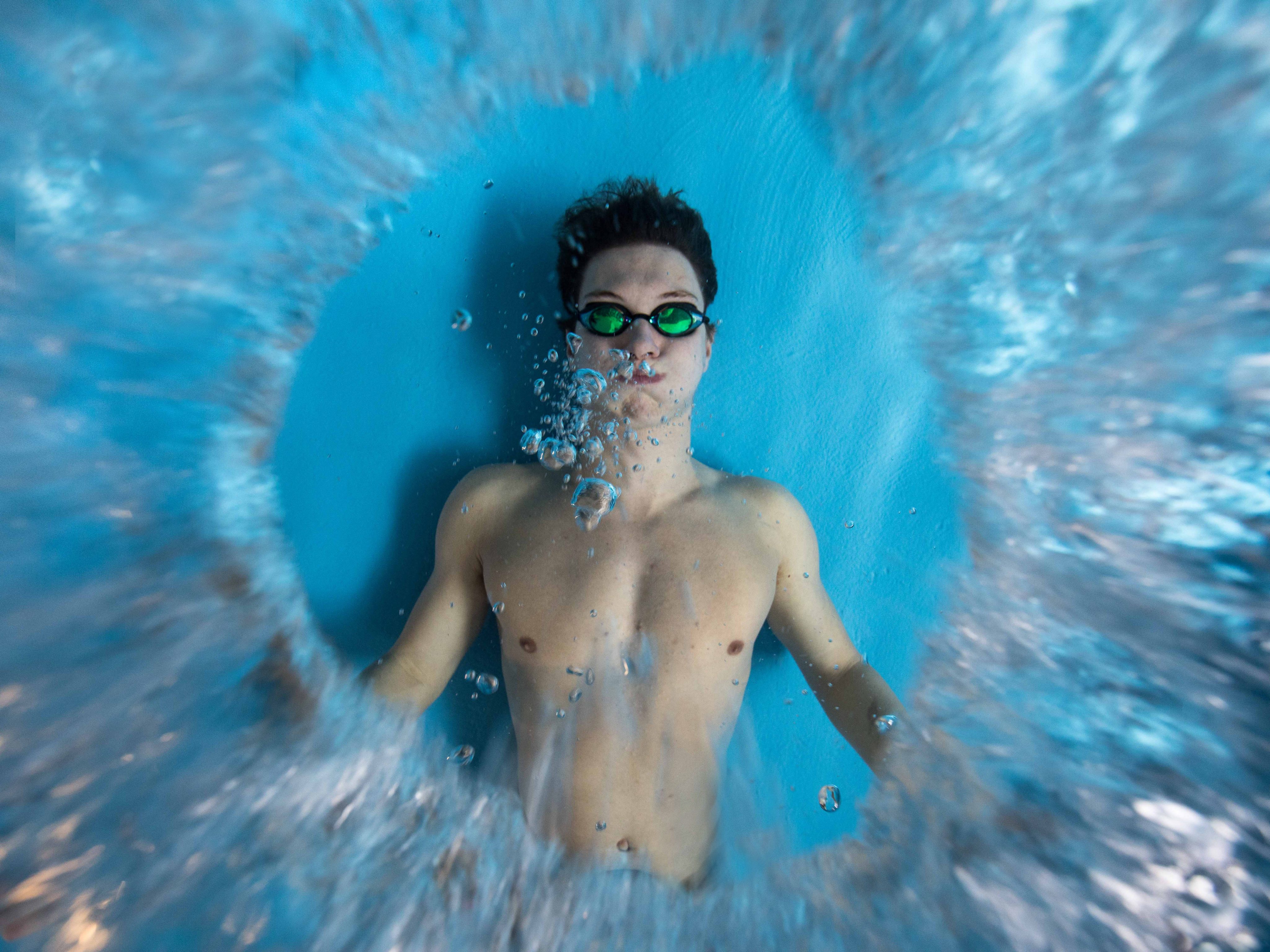 McGill varsity swimmer, photographed in Montreal
Murnaghan began taking photos underwater in December 2016. His first challenge was finding a place to shoot in Toronto in the middle of winter. He knew a few members of Ontario’s LGBT Triggerfish water polo team and asked if they’d help him find a location. They invited him to shoot their practice and Polopalooza 2017, a water polo tournament. From there, he began scouting out other locations: pools in hotels, condos and friends’ backyards. He took this photo of swimmer Kade Wist on the McGill campus in Montreal, using a Canon 5D Mark IV, housed in a waterproof case. He doesn’t use breathing equipment during shoots; he wants to be on the same level as his models and share the experience. 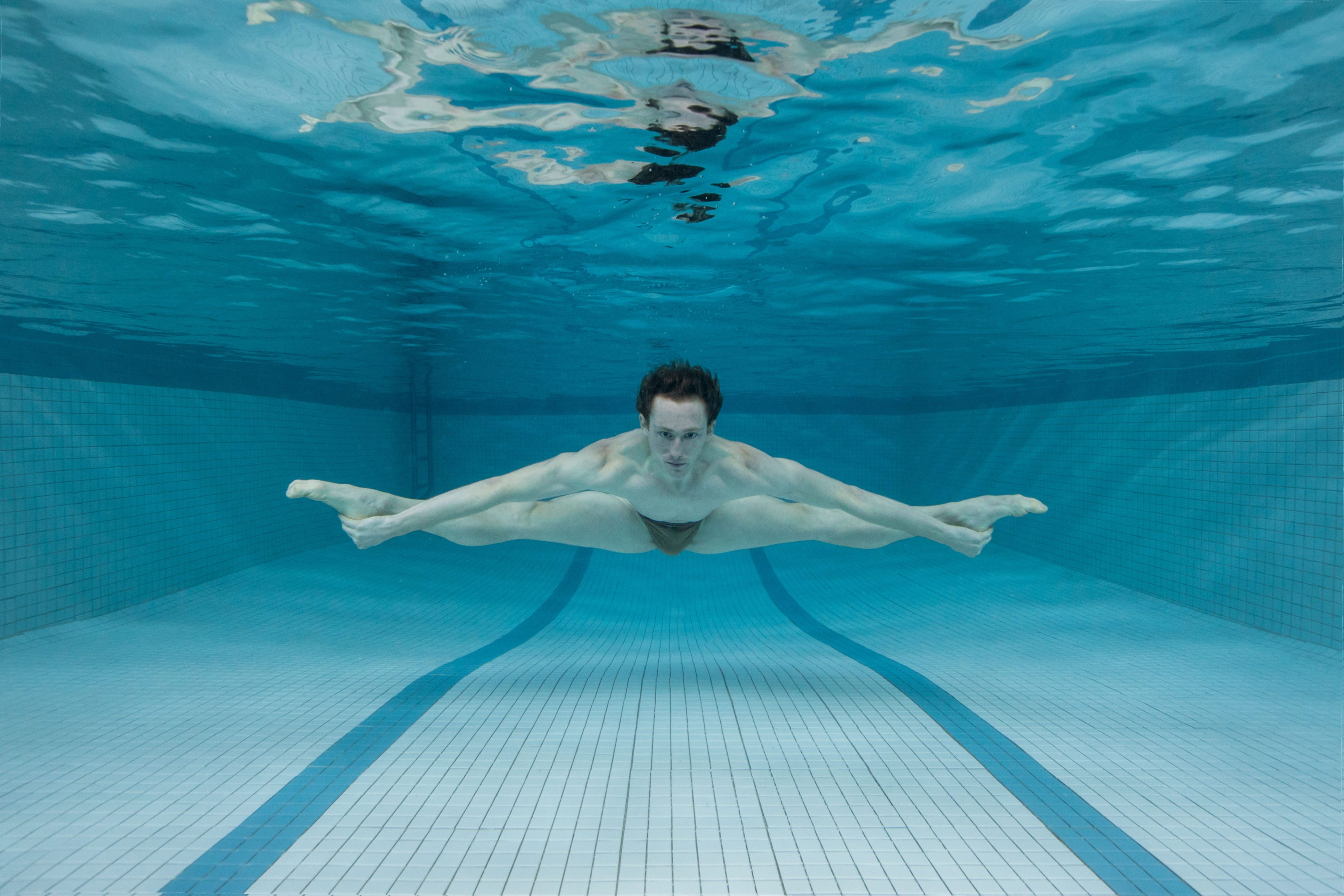 National Ballet of Canada first soloist, photographed in Toronto
Inspired by Pina, a Wim Wenders film featuring dancers in unconventional locations, Murnaghan reached out to the National Ballet of Canada. First soloist Skylar Campbell was intrigued; he was impressed with Murnaghan’s dynamic, emotionally powerful images. “At first, I thought, How did he do that?” says Campbell. Despite growing up minutes from the beach in California, Campbell was never into water activities. “I was more interested in skating and dancing, and water was not something I enjoyed. I was hesitant, but I thought [doing a shoot] would be a great challenge.” Murnaghan arranged the shoot in a vintage-style condo pool. Campbell practiced splits and pirouettes in the middle of turquoise mosaic tiles as Murnaghan snapped away. Campbell says the biggest challenge ended up being the cold.“By the end, I couldn’t stop shivering. And when we went to the shower, there was no hot water!” 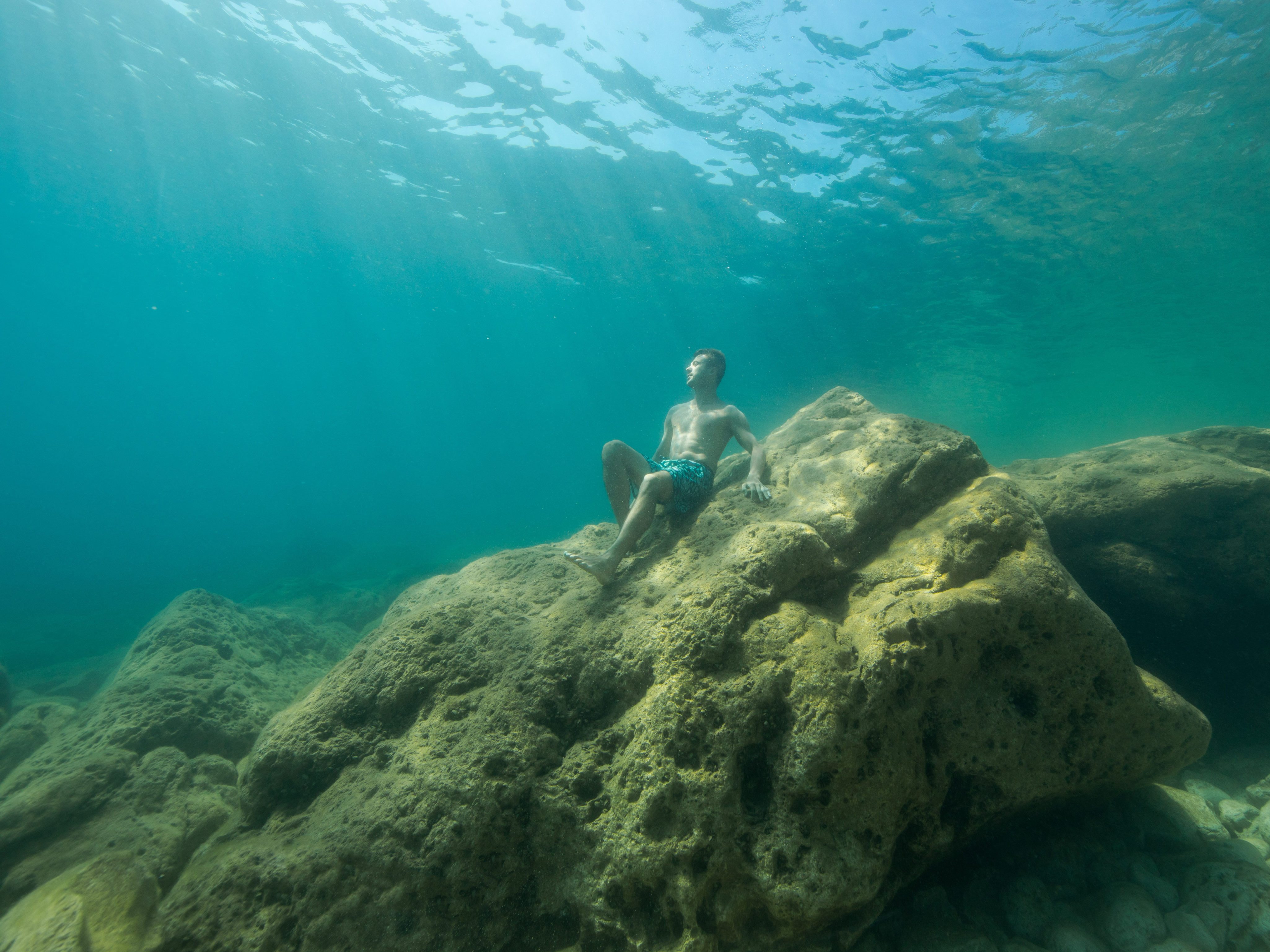 Surfing and yoga instructor, photographed in Lake Huron by Bruce Peninsula Provincial Park
When Murnaghan took this photo of his partner, Antonio Lennert, Lennert imagined he was having a tea party with his brothers and cousins. The result looks effortless, but the process wasn’t. During his first few dives, Lennert returned the surface quickly, gasping for air. Murnaghan managed to make him feel more confident as he dove down again. “He asked me to go to the bottom of the lake, look through his knees and think about a time in my life when I felt a lot of shame,” Lennert says. Then, on the next dive, Murnaghan told him, “This time, I’ll have my legs wide open, and you are going to swim through them.” Following the instructions led to a breakthrough. Soon after, Lennert was comfortable enough in the water to strike this pose. 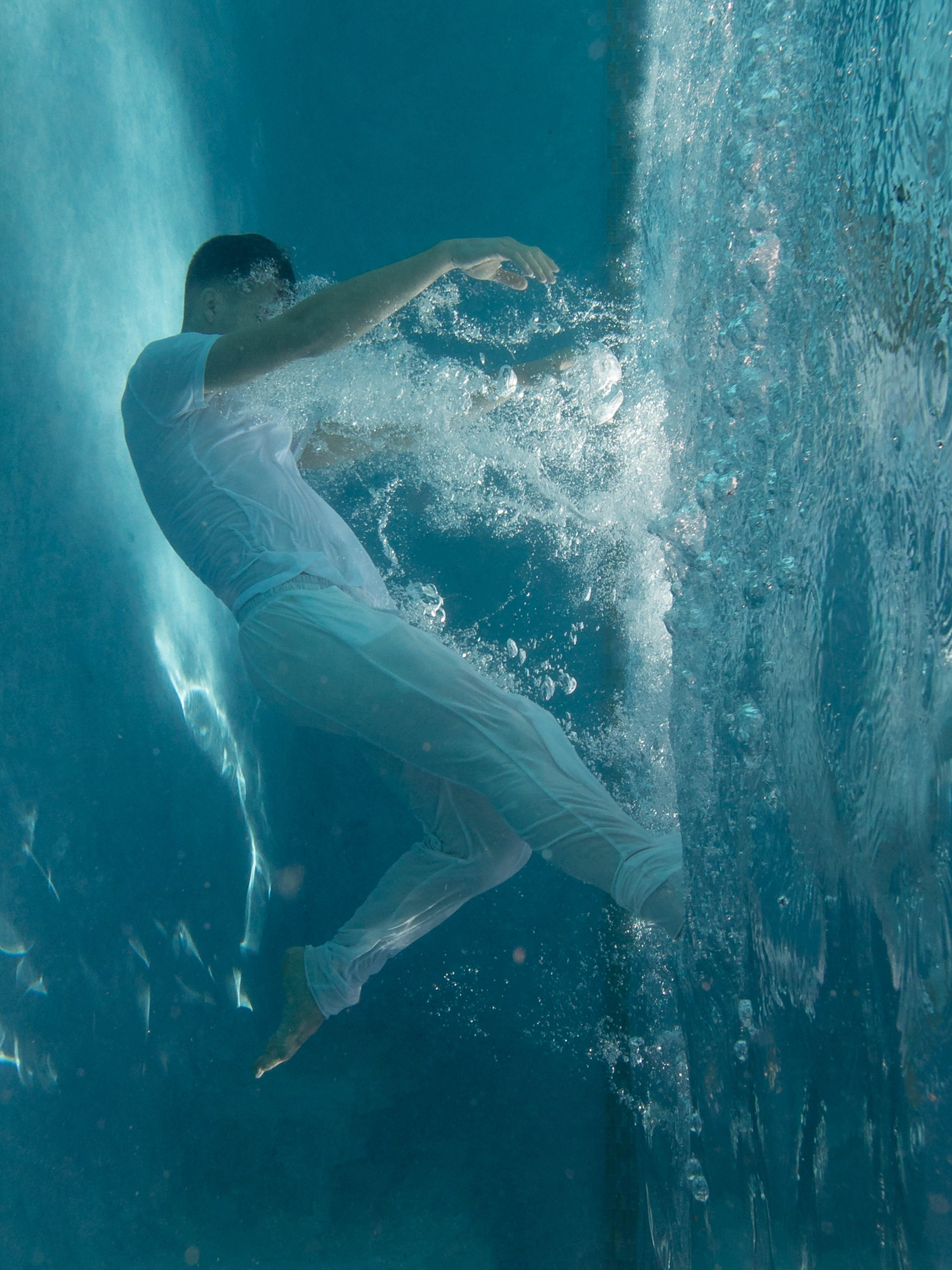 Model, photographed in Los Angeles
Murnaghan often speaks with his subjects about childhood memories, and sometimes instructs them to think about unpleasant episodes as they’re posing. “The underwater world is a safe space,” he says. He sees it as a place where they can express old emotions or feelings—loneliness, shame, fear, rejection—they haven’t acknowledged or understood. 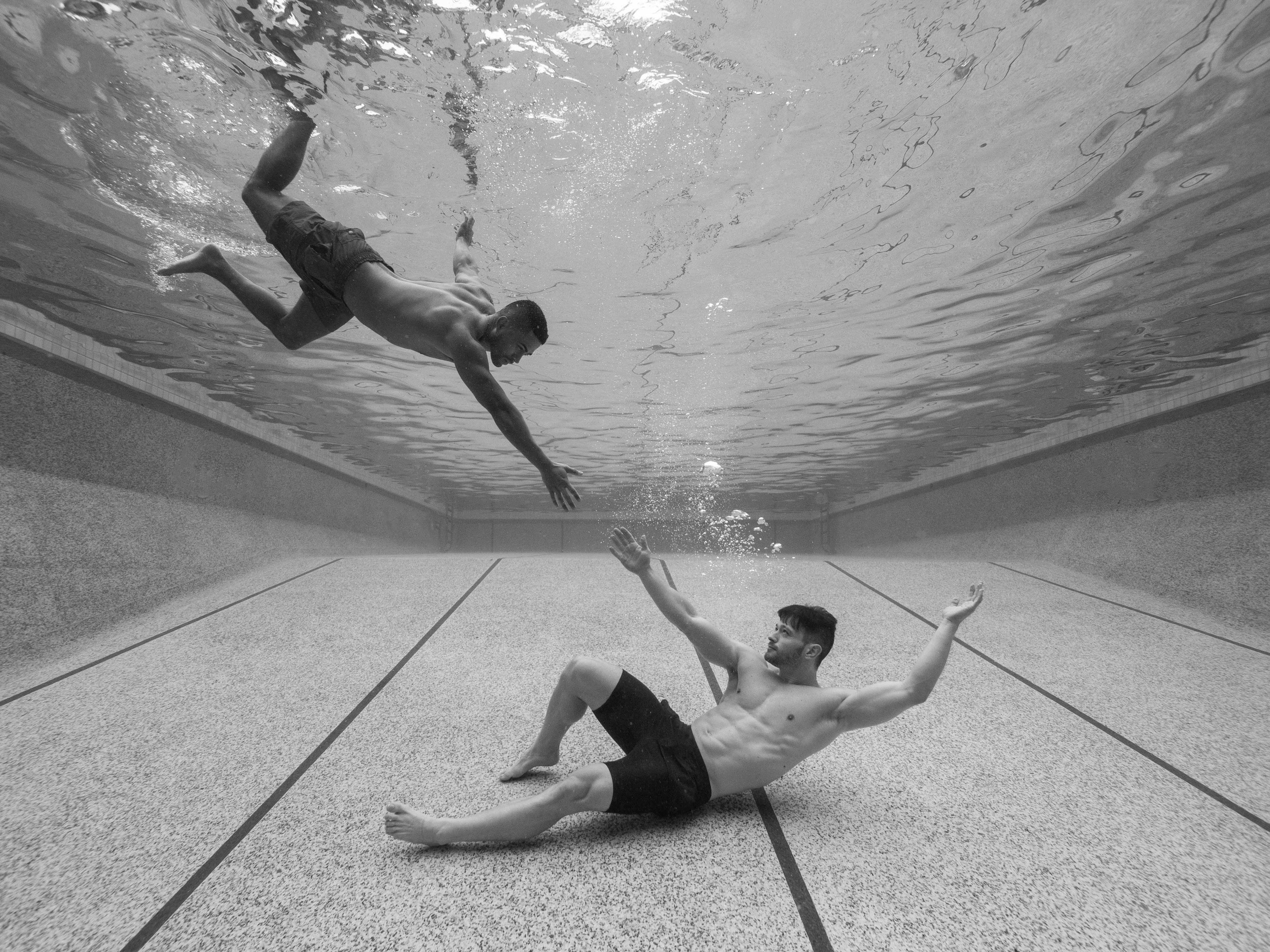 Models, photographed in San Diego
It makes Murnaghan proud, he says, when friends and Instagram followers question whether photos like this are Photoshopped or fake. “When I first saw [a comment like that], I got really upset about it,” he says. “Now, I take it as a compliment because it means they can’t believe that what they see is real. But they are actually there. We are all underwater.” Even if his memory card gets corrupted or he accidentally deletes a picture, he considers the shoot a success if everyone enjoys it. “One of my favourite things is when, at the end of a shoot, a 32-year-old subject says, ‘I haven’t had that much fun since I was a kid.’ That’s what I’ve learned: it’s about enjoying the process rather than getting a shot or being published. It’s to explore and express an artistic side of me. Otherwise, I’d just stop doing it.” 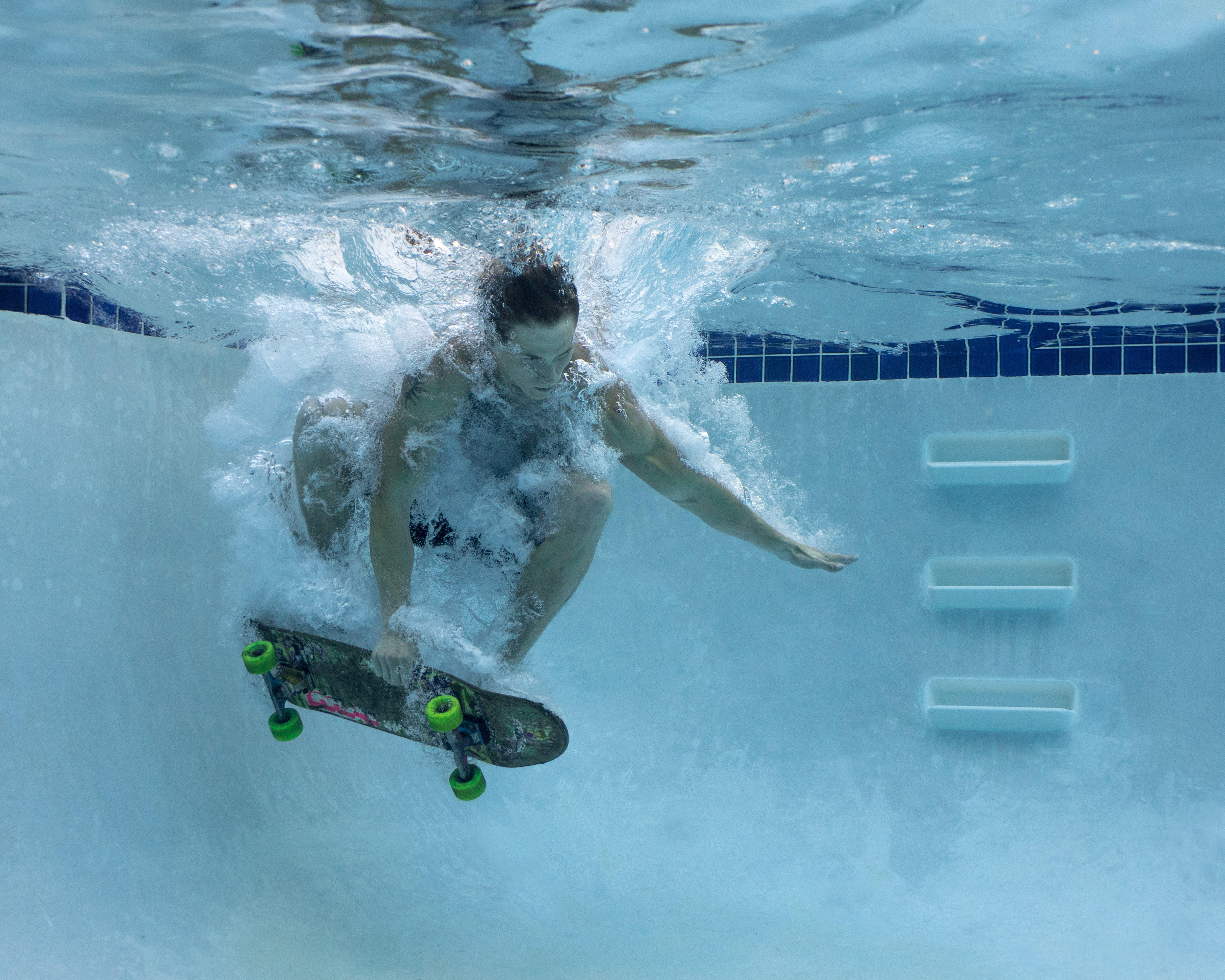 Model, photographed in Los Angeles
A viewer once described Murnaghan’s work as “casual improbability,” a term he liked and adopted. “People see someone doing something very familiar and very understood”—like riding a skateboard or falling—”in an environment that they would’ve never expected.” 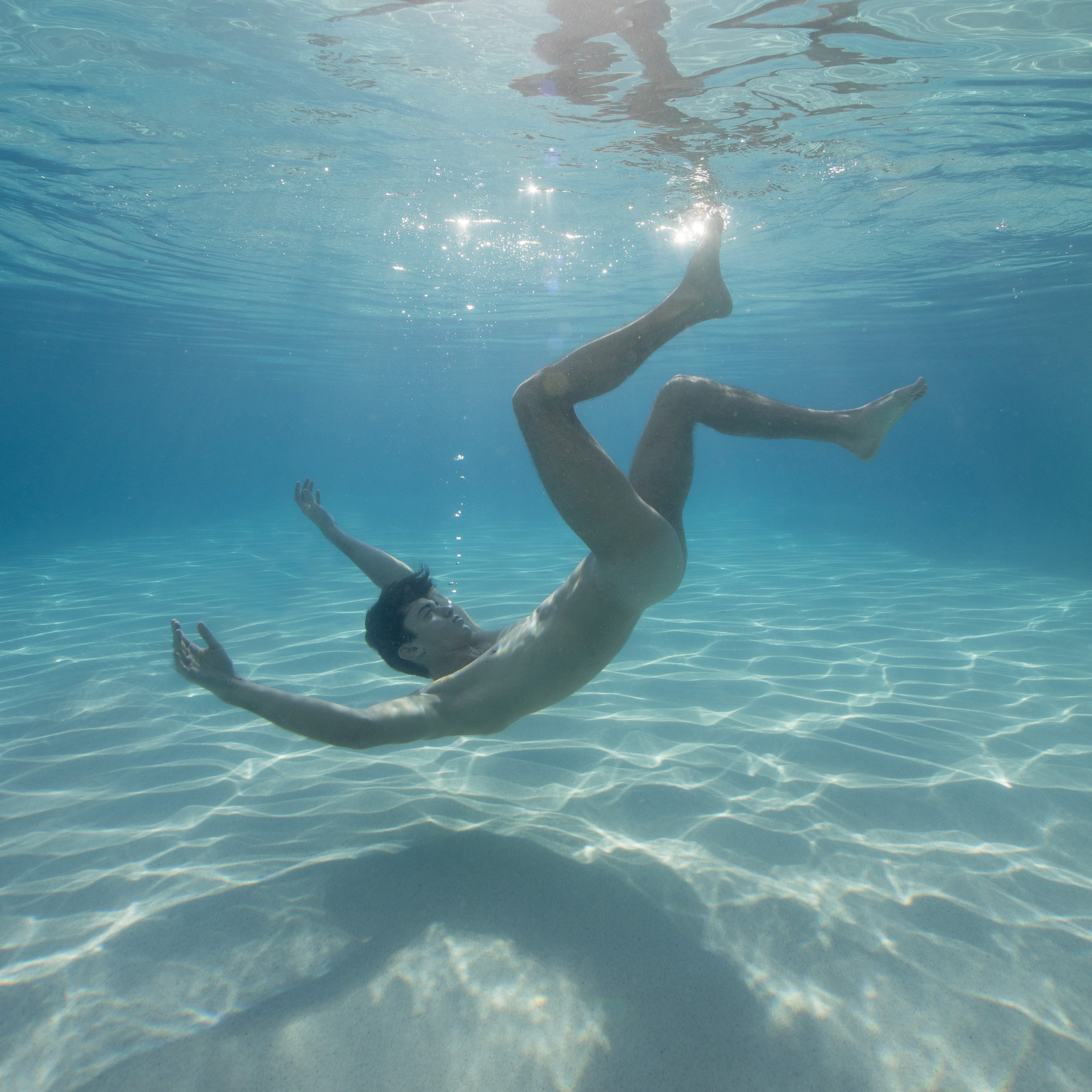 Model, photographed in Miami
Underwater, anybody can look like they’re floating in space. The trick to creating a captivating photo, Murnaghan says, is maintaining a sense of gravity. “The models need to create the impression that they are going down again,” he says. “That’s what makes the images very dynamic.” 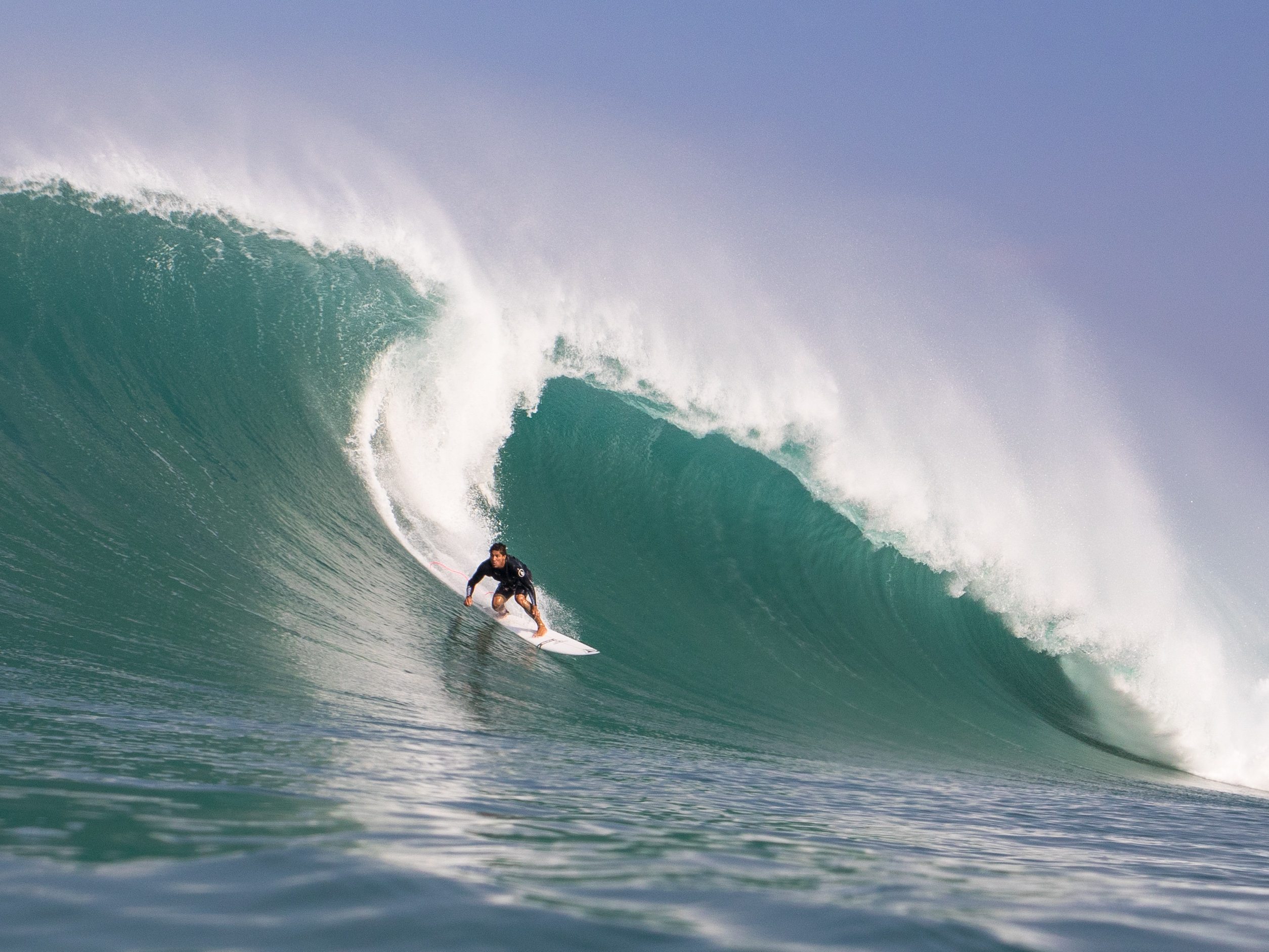 Surfer, photographed in Puerto Rico
This photo predates Murnaghan’s underwater photography. About four years ago, he started shooting surfers. He captured some incredible breaks and surfing competitions in Canada (on Georgian Bay and the coast of Vancouver Island), New Zealand, Australia and Iceland. He was in Puerto Rico when he took this shot of Óscar Moncada, a surfer who died in a car accident last November. Eventually, he decided he wanted to go deeper and begin shooting underwater.