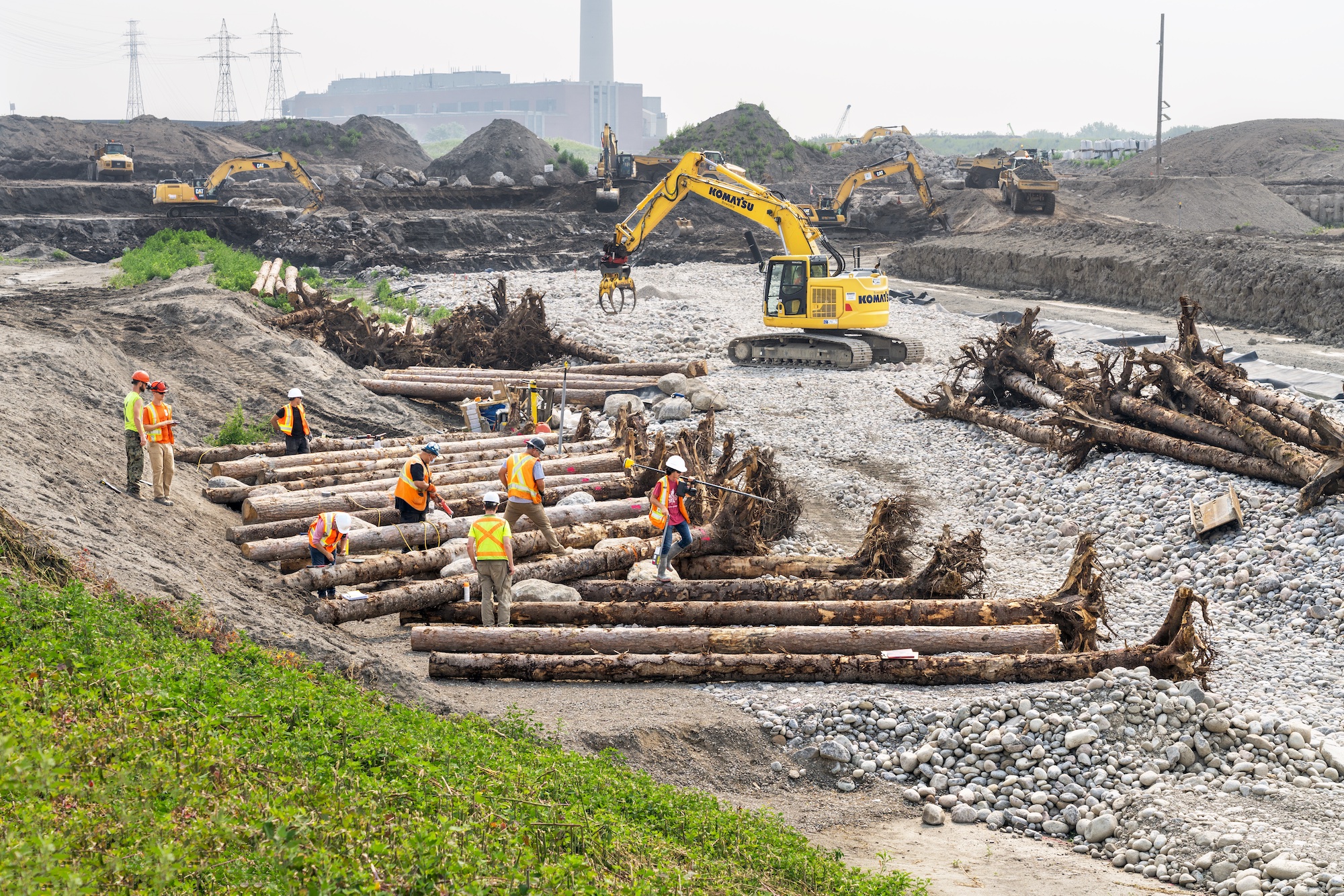 Since 2019, Toronto-based artists Vid Ingelevics and Ryan Walker have been documenting Waterfront Toronto’s Flood Protection Project, a massive transformation happening in the Port Lands. The plan is to restore the mouth of the Don River to its pre-industrialized state and recreate a coastal wetland at its base. The purpose of the project is to prevent the flooding that occurs during extreme weather and to bring back the natural habitat. How to Build A River, a Scotiabank Contact Photography Festival exhibition, is a selection of their photographs from the past year that highlights some of the project’s critical issues, including environmental innovation and the ecosystem’s regrowth. The exhibition is on display until September 2022 near the Port Lands entrance at Villiers Street. Here’s a closer look at their work. 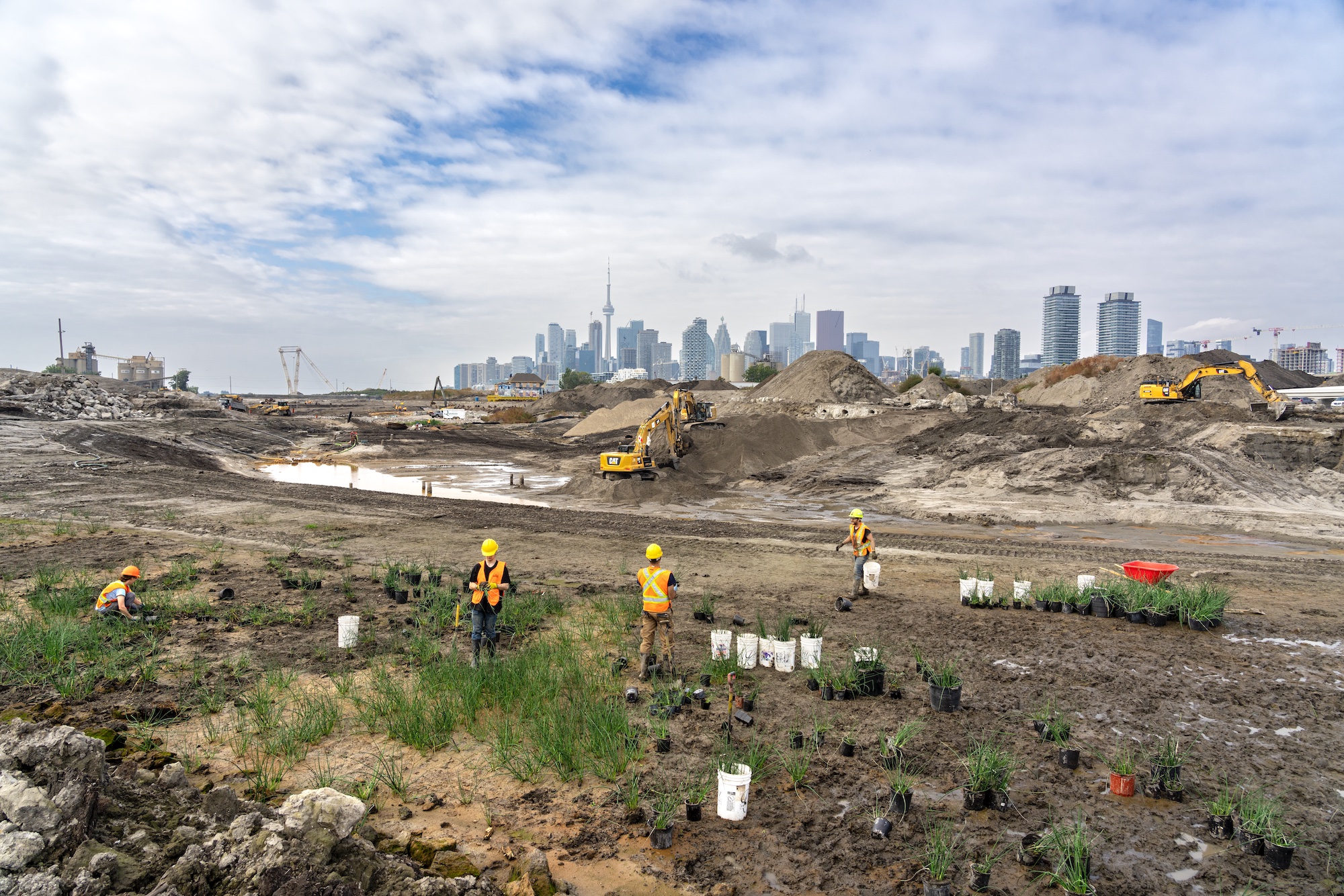 These flora, which started growing on the site mid-project, were identified as plants germinating from seeds deposited in the old Ashbridges Bay before the Port Lands were filled in a century ago. Here, the workers are rescuing the plants for research and replanting. “One of the workers on the site with a green thumb realized that the plants were not just regular weeds,” says Walker. “These plants are like a time capsule from a hundred years ago.” 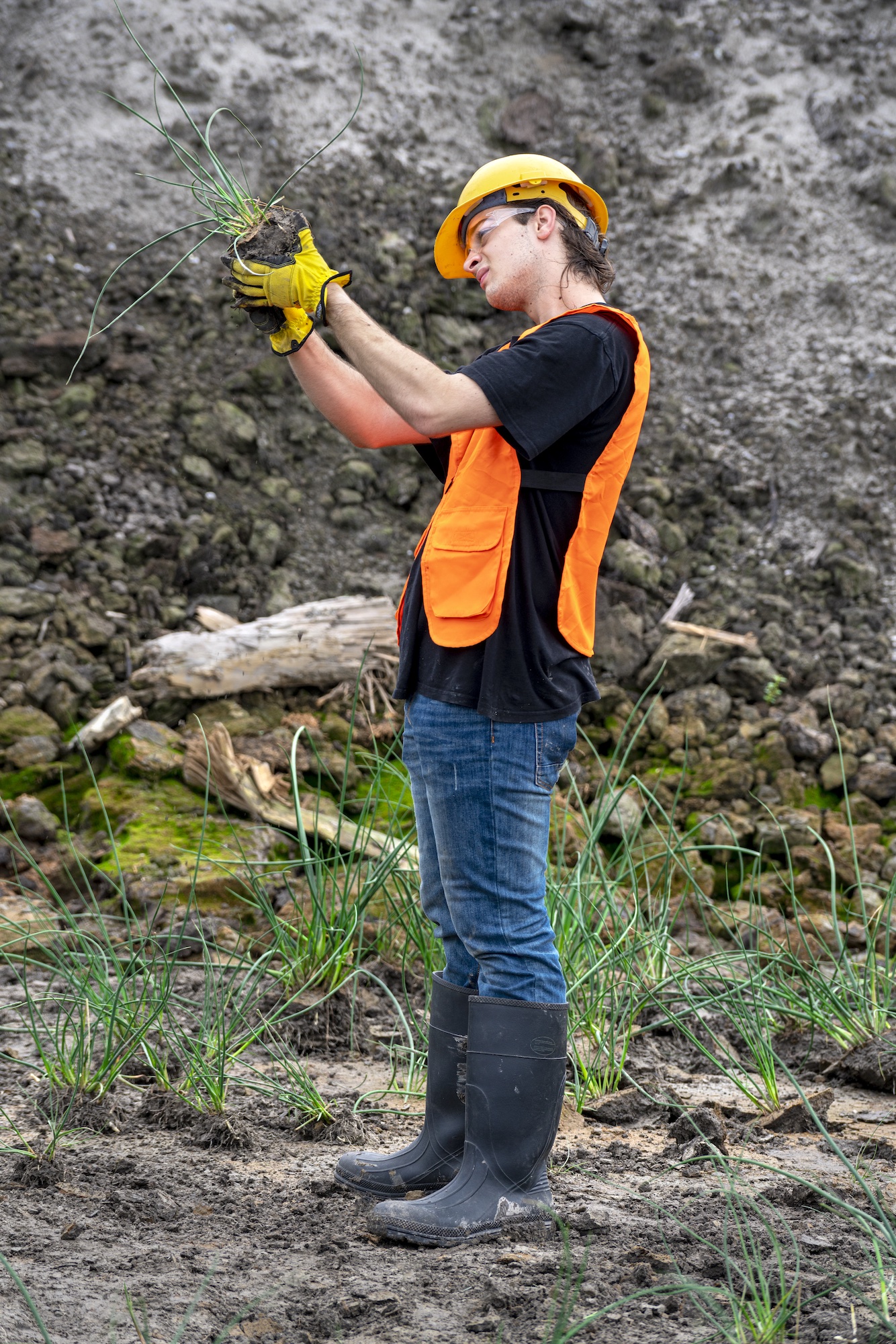 Subcontractors were called in to transplant the vegetation. Some saplings were relocated to Tommy Thompson Park while others were taken to U of T’s research labs. 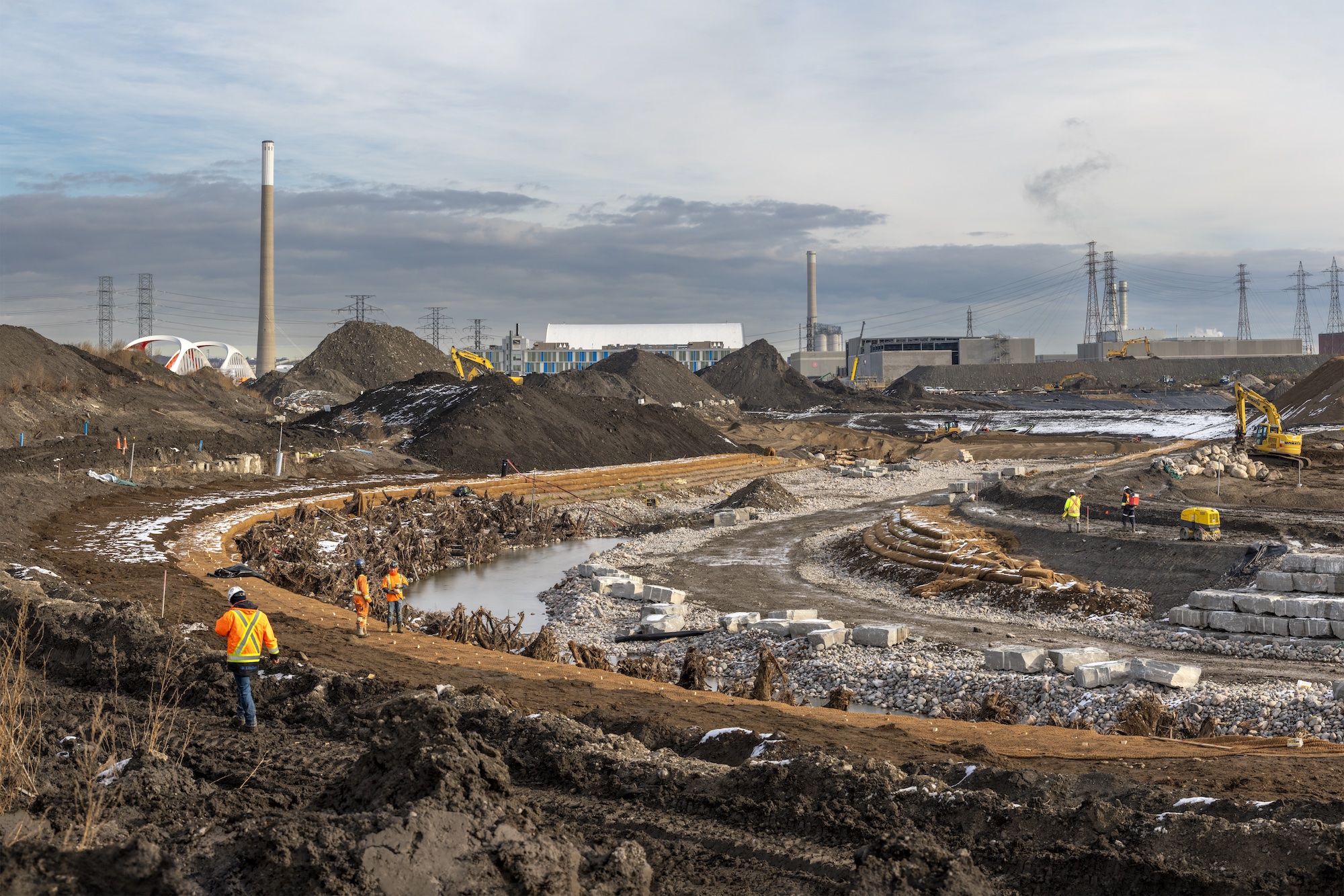 Here’s an expansive view of the project looking east across the newly excavated central river valley, with the Hearn Generating Station visible in the background. The project uses mostly natural materials, including rocks and trees, to form the riverbed. “One hundred years later, we’re looking back to nature and combining that knowledge with engineering practices to ensure that this river doesn’t erode,” says Walker. 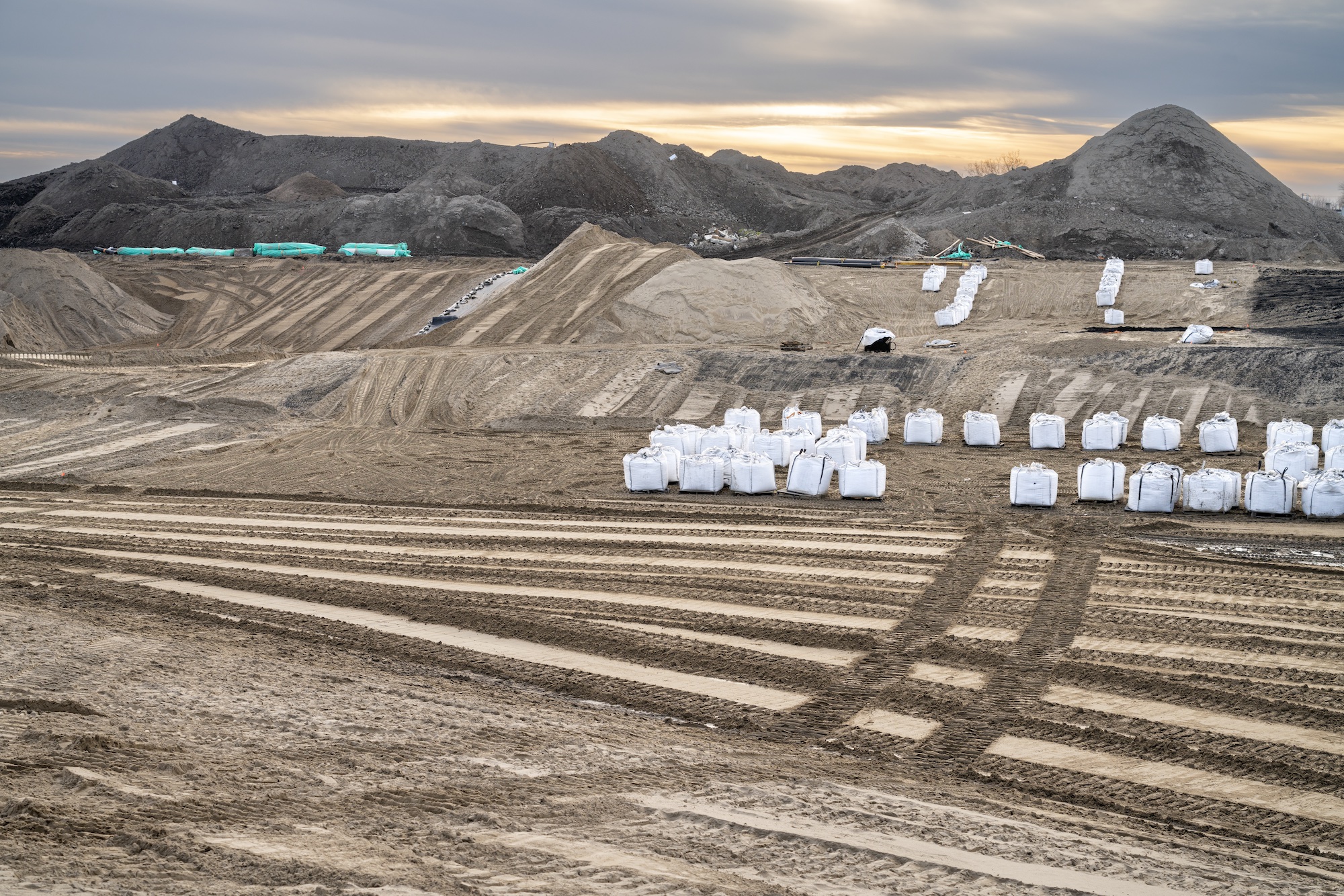 Black charcoal, seen here in the white bags, will be layered underneath the soil to filter out contaminants. After snapping their shots, Ingelevics and Walker talk to experts from Waterfront Toronto to help them understand what exactly was happening and why at the various stages. 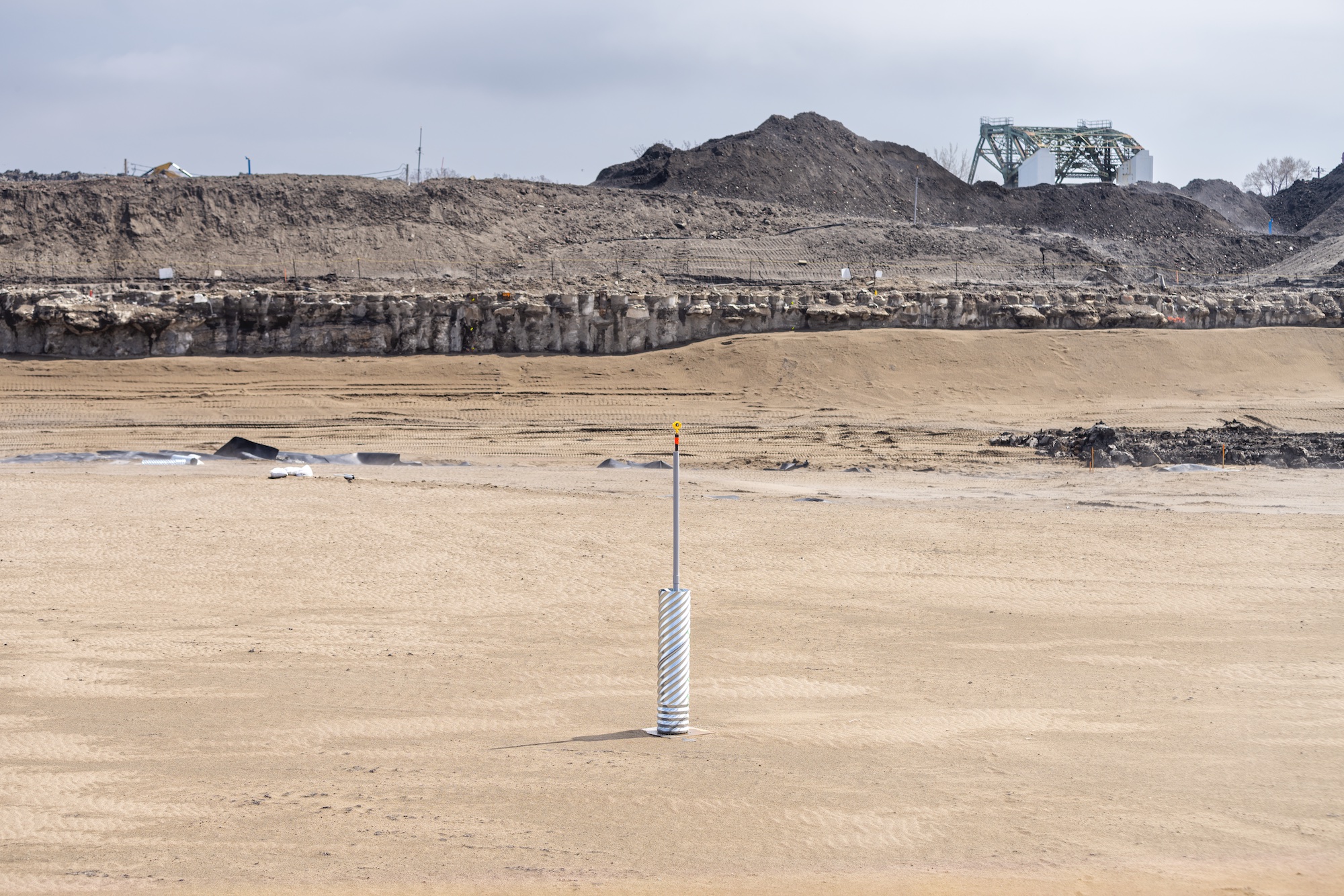 The Flood Protection Project’s goal is to lengthen the Don River and create a natural river valley. The Port Lands housed fuel tanks for many decades and contaminants are deeply embedded in the soil. When new land is excavated for the river, it’s topped off with a layer of sand to stop pollutants in the earth below from seeping up into the new river. Surveyors use the cylindrical object in the foreground to measure any recent shifts in the level of the ground over time. Workers are piling more soil than they need to settle the ground so when they build roads or buildings, it won’t cause any issues. 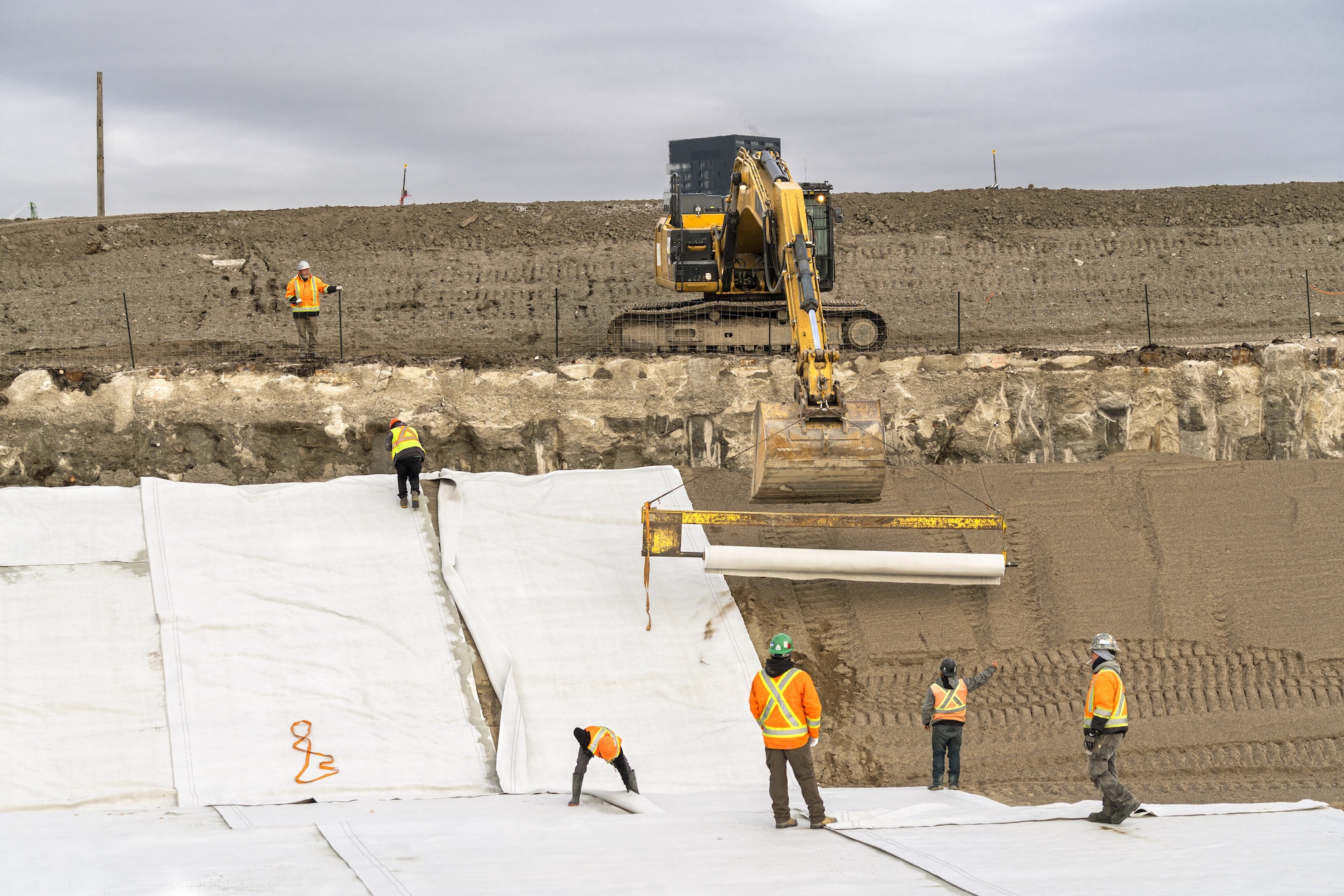 Placing this white membrane is the first stage of creating the riverbed. To ensure that there’s no cross-contamination, the teams have banned heavy equipment from this section. “No machines can go into that area,” says Walker. “And workers need to wash their boots off to decontaminate between sections at different stages.” 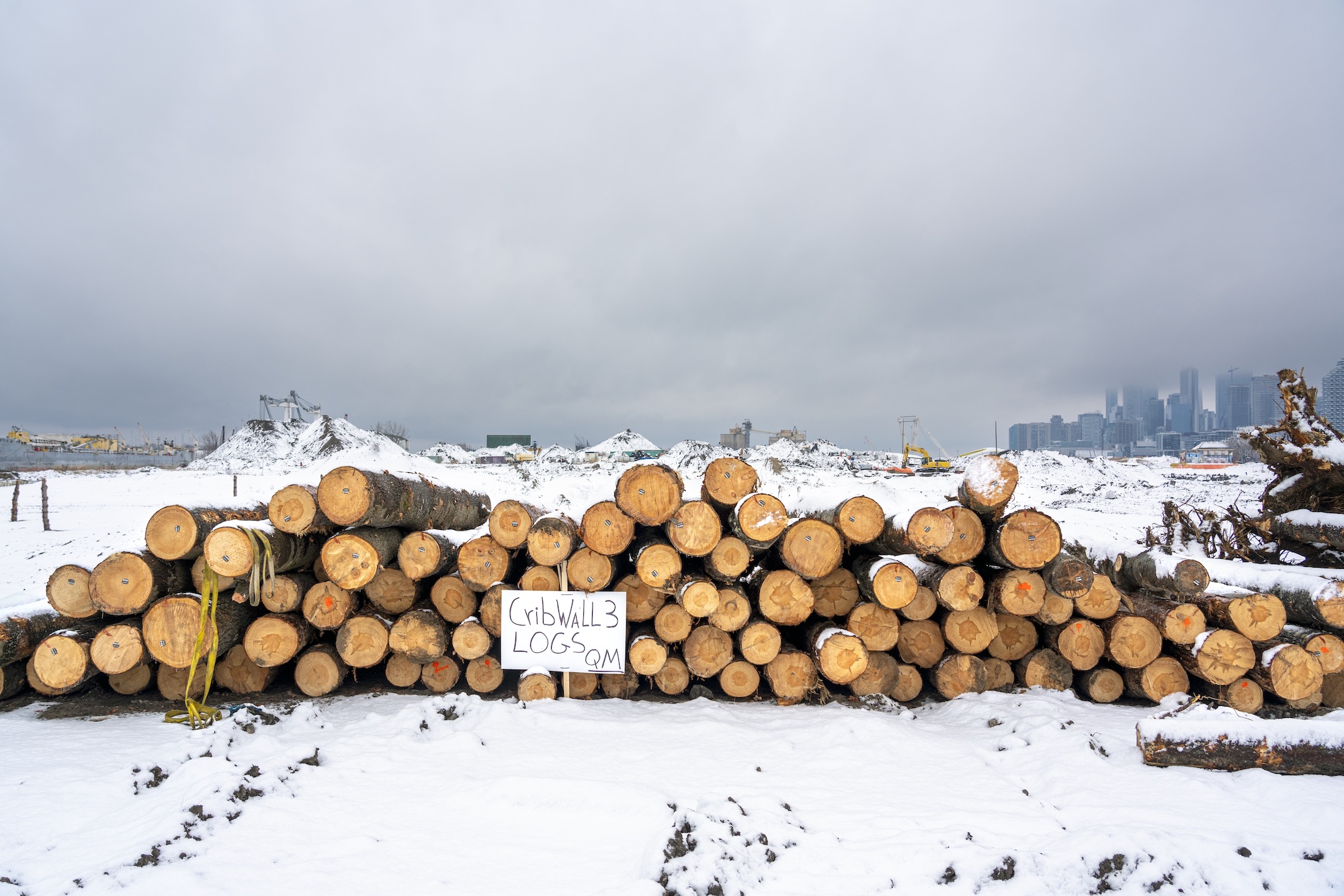 Every piece of natural material—the piles of rocks, soil, trees and plants—used in the project are tagged and tracked. “The construction process can seem chaotic, messy and unorganized,” says Walker, “but it’s highly choreographed.” 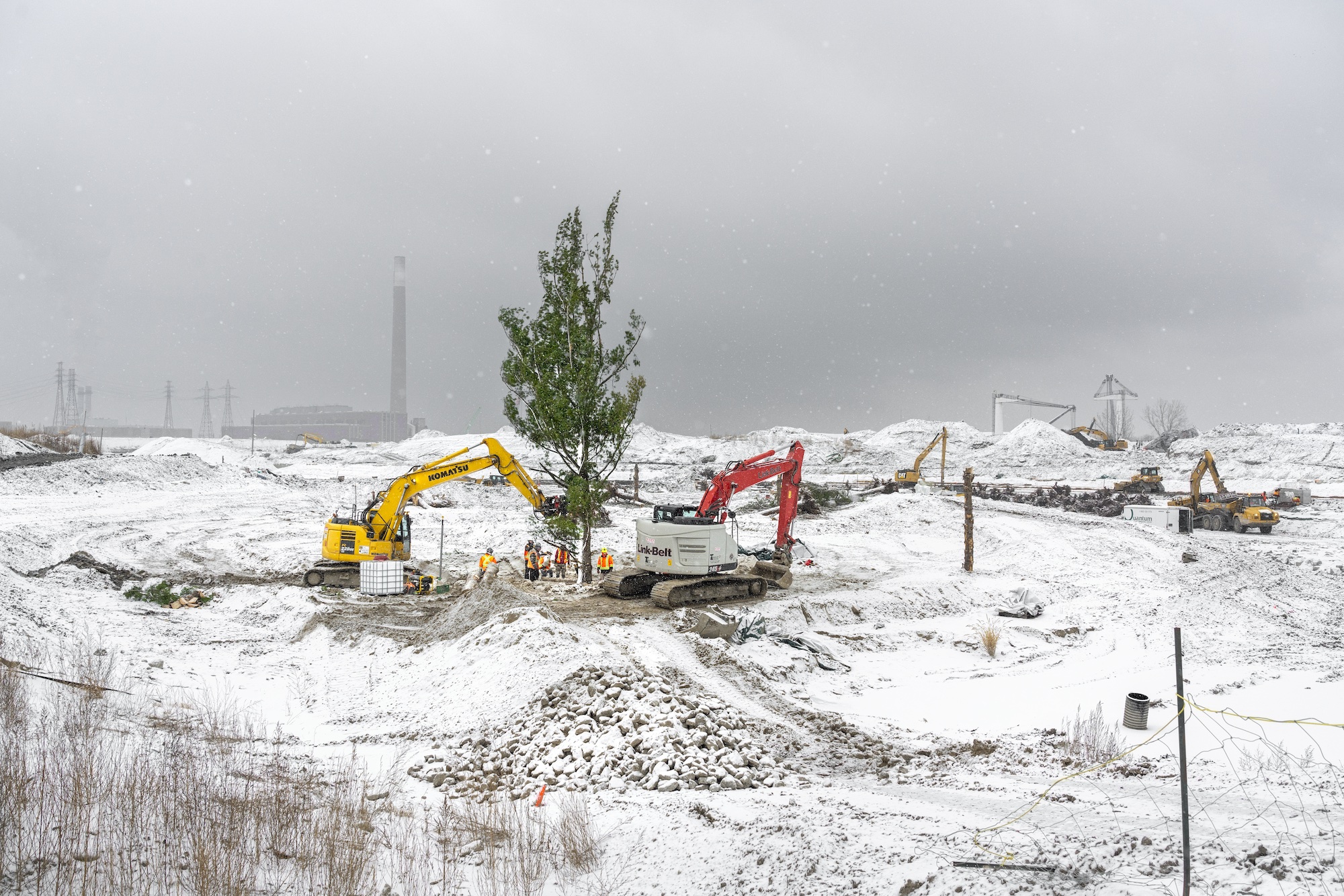 This tree is the first of many that are being planted, without a root system, in order to partially decompose, get absorbed into the earth, and ultimately restore the marshland ecosystem. “This was the first intentional piece of greenery that was placed,” says Ingelevics. “Even though it was meant to die, it was interesting to see something green.” 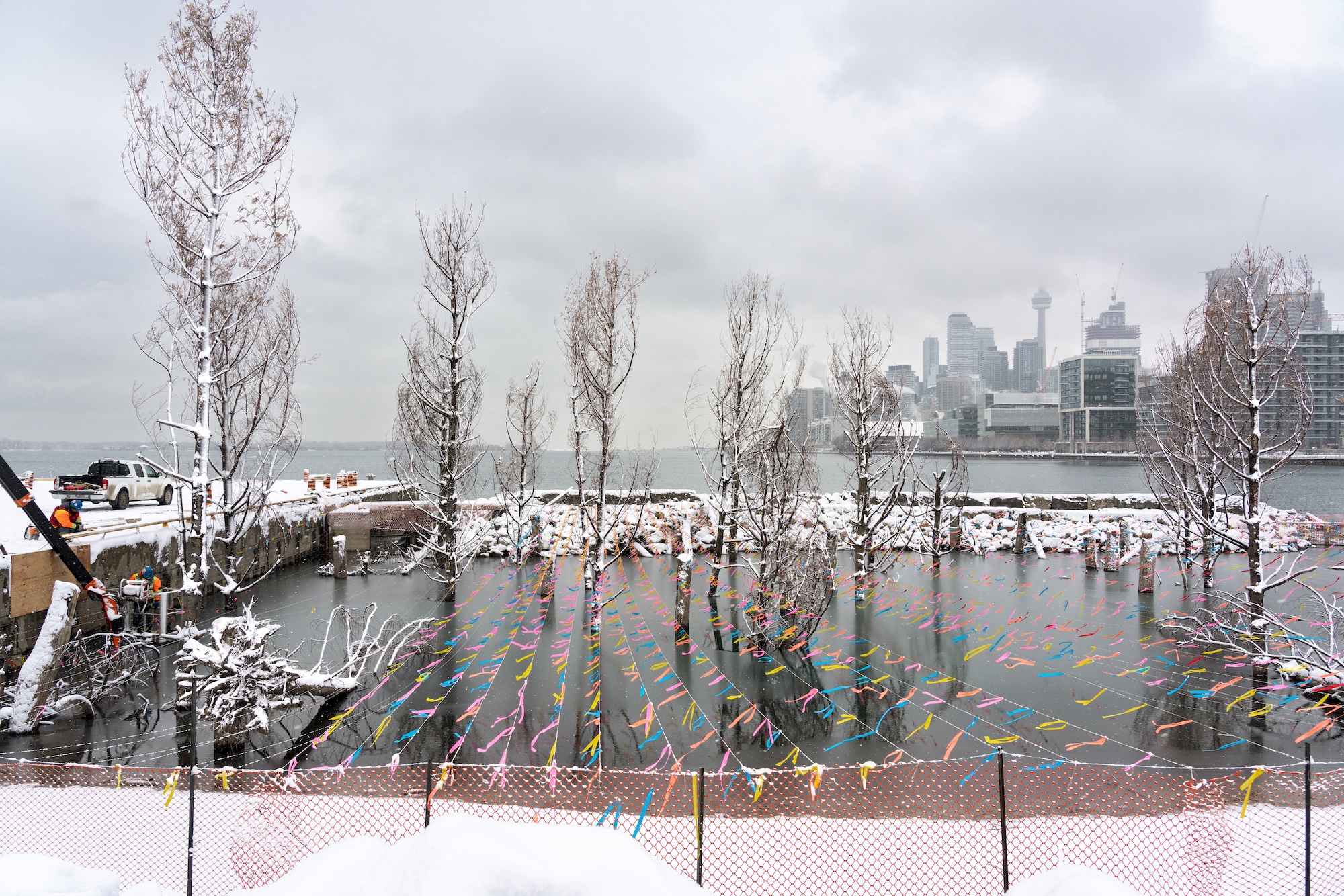 Here’s a section of the marshland project that’s much farther along. These trees are all here to decompose and do their thing. The streamers keep birds away so the nutrients and fish can thrive. “There is already a new species of fish in this area,” says Ingelevics. “It’s working.”