Last year, Toronto photographer Pete Thorne turned grizzled elderly dogs into super models with his viral photo series–turned–book, Old Faithful: Dogs of a Certain Age. Now, he has a new muse: cats. With his latest project, Fat Cats: Large and In Charge, he wants to shake the Garfieldian image of fat felines as lazy and dopey. “I’ve always thought chubby cats were the cutest cats,” says Thorne. “But if you search online for them, they are always mean, mocking photos—cats stuck in doors or sprawled on the ground like they couldn’t get up.” 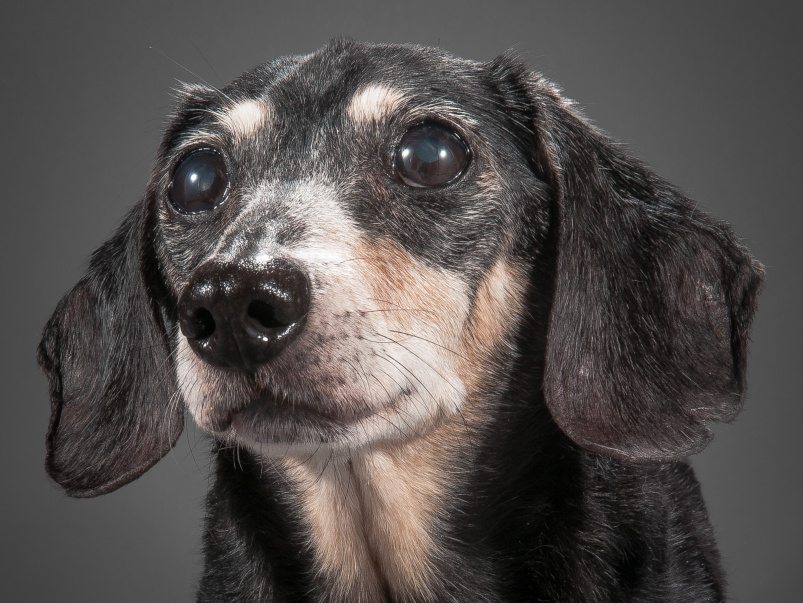 Thorne originally planned to shoot his subjects at his home studio, but that was “a complete disaster”—cats freaked out the moment they arrived. So, he travelled across the city to take glamour shots of Torontonians’ pleasantly plump pets, many of which he found via Bunz Trading Zone. He set up make-shift studios at owners’ houses that included minimal lights, a big comfortable stool for the cats to lounge on and the perfect mix of treats and toys. Even so, only two of out three shoots succeeded. He plans to publish the images in a coffee table book and continues to shoot commissioned cat portraits.

We asked Thorne to share the stories behind 10 of his cutest cats. “Beedee is our cover model. She was so chill. You could plop her down and move the lights around, and she would stay completely unfazed. You could form her however you’d want and she’d stay like that. With other cats, you get one opportunity—the flash goes off and they bolt. I didn’t want to use props because I didn’t want to mock the cats, but she was so chill that I put this baby t-shirt on her.” “Bubba looks like an old wizard with his big mane. You can almost make out a moustache. He was a well behaved cat. To get shots like this, where the cat is standing up, I have to get the owners really involved. They dangle a toy or treat off the side of the frame. The cats do need some encouragement, whether it’s food or the crinkling of a toy—something that will make them perk up and look over.” “Marshmallow was one of the first cats I photographed. She was rescued from the Montreal SPCA by Team Cat Rescue in Toronto. She was 28 pounds when she was dumped at the shelter by her previous owners. She’s been able to lose weight and now lives in a long-term care community for senior citizens as a therapy cat for the residents. They’re really proud that she’s lost quite a bit of weight.” “When I first saw Monty’s picture, I just couldn’t resist. He’s not really a big fat cat, but he has man boobs. When I took this photo, he was shaved because it was the beginning of the summer. I think it was his annual shave to remove any mats and maybe to keep him cool. Now he looks like a giant fur ball.” “This is one of my favourite photos. I love the little expression he has on his face. He’s in the middle of meowing, and it came across as this perplexed look. His owners said, ‘We’ve had him for over nine years and he’s been in a bad mood for most of that time, but despite his sourpuss attitude, he is very sweet and loves to sleep on the bed with us.’ His owners rescued him from a shelter.” “The book’s subtitle is Large and in Charge because these cats are their homes’ bosses. Chesterfield is kind of an angry cat. He was a bit of sourpuss. He sat there and enjoyed himself up to a certain point, then he hissed and I got this shot. We photographed him for maybe 15 minutes. You don’t get much time to shoot a cat—they have even shorter attention spans than the old dogs did.” “Aster is a nine-year-old British Shorthair. He was a lot of fun to photograph because he responded really well to the toys. This is a toy that I often use because it’s on a wire—I’m able to dangle it while I’m shooting and keep it out of the camera frame. But Aster just went nuts for it and kept dragging it into the frame, and it definitely works for the image. These cats are still active; they’re not all big and dopey.” “Rusty’s owners describe her as ‘a soft loaf of bread with baby carrot legs.’ She’s one of my favourites because every time I tried to photograph her, she’d just get up, drop off the little stool and go right into the kitchen and sit down in this empty Grolsch two-four box. It was her little comfort zone. So we made it a lot easier and just took the beer box and put it in the middle of the set. Then I could shoot whatever I wanted.” “The shortest photoshoot was with Evie. It was, like, five minutes. We got one shot of her lying down, and then we brought out the stool and plopped her on there. After that one shot, she was done. I really loved the look of her two different eyes—this little David Bowie cat.” “Sam was also one of the first cats I photographed. He was difficult to photograph, but that might have been my fault because I was still trying out different lighting techniques. This was the only shot I got of him looking at the camera. He was bashful.”