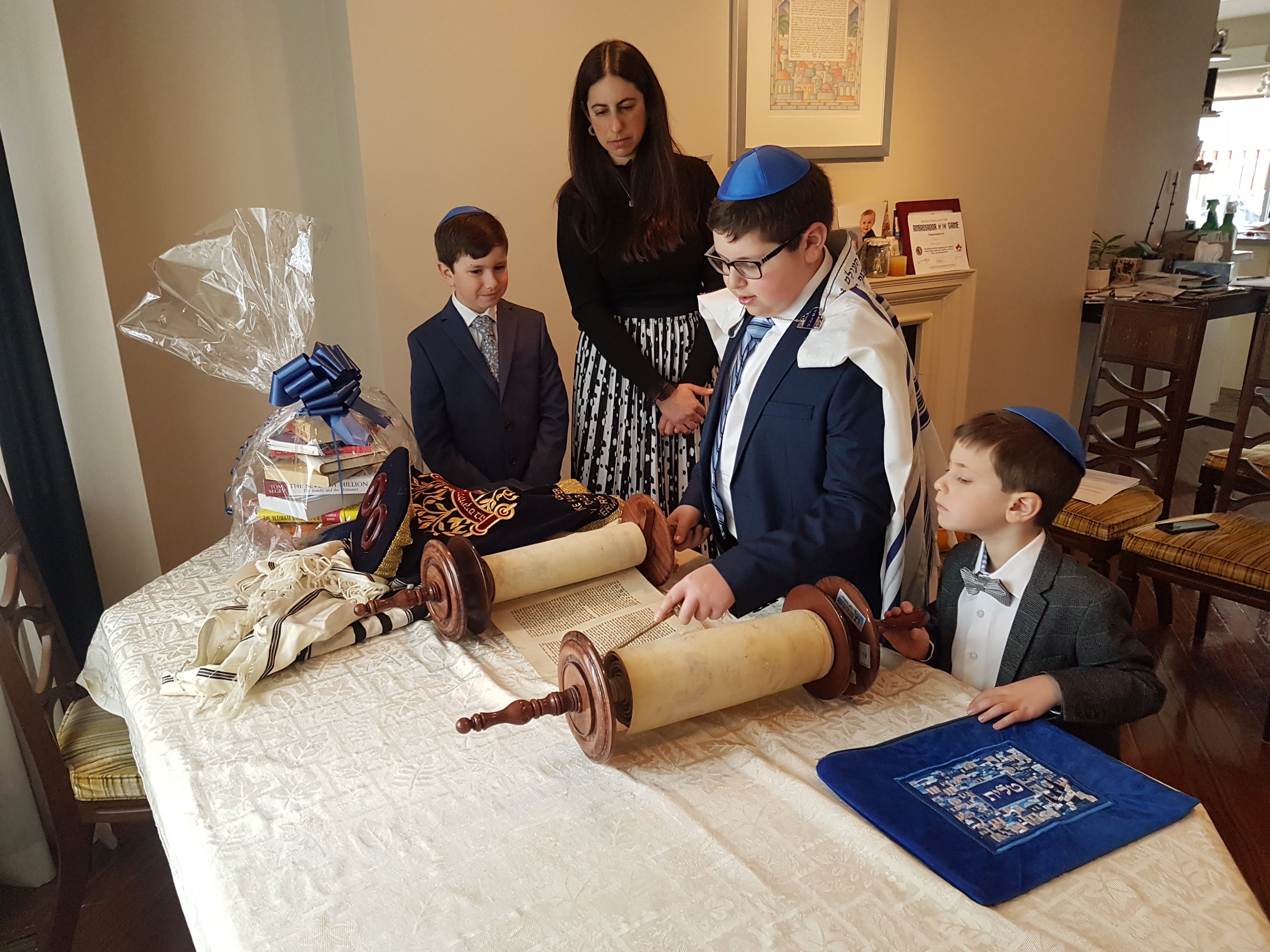 Batya Grundland, a family doctor, and her husband, Mark Rottmann, a high-school science and engineering teacher, live in Toronto with their children Mattan, 13, Benjamin, 10, and Amitai, five. The family had been planning Mattan’s bar mitzvah for over two years, and the two-day event was set for last weekend. When Covid-19 concerns forced them to cancel all in-person celebrations, they moved the bar mitzvah to a livestream.

Batya: I booked the event with the synagogue two and a half years ago. Our photographer was booked two years ago. I was looking forward to celebrating with our family and friends. It’s a ceremonial milestone, so I wanted it to be meaningful, but so much of the joy comes from sharing it with the community and those close to us.

Mark: Batya loves the horah. It involves a bunch of people dancing and holding hands, which is basically the opposite of social distancing.

Batya: Our original plan was for Mattan to do the traditional Saturday morning service in front of the entire congregation at Beth Emeth Bais Yehuda Synagogue in North York. After, we would sponsor a kiddush, a light lunch, for our guests as well as the congregation. On the Sunday, we had planned a luncheon party for 175 guests at the synagogue’s banquet hall with arcade games for the kids. We booked a singer for traditional dancing and the horah.

Mark: Seeing people take time out of their schedule and, in some cases, travel long distances to be there made us feel so supported. We had friends and family confirmed who were coming from New York, Washington state, Montreal, Milwaukee and California. 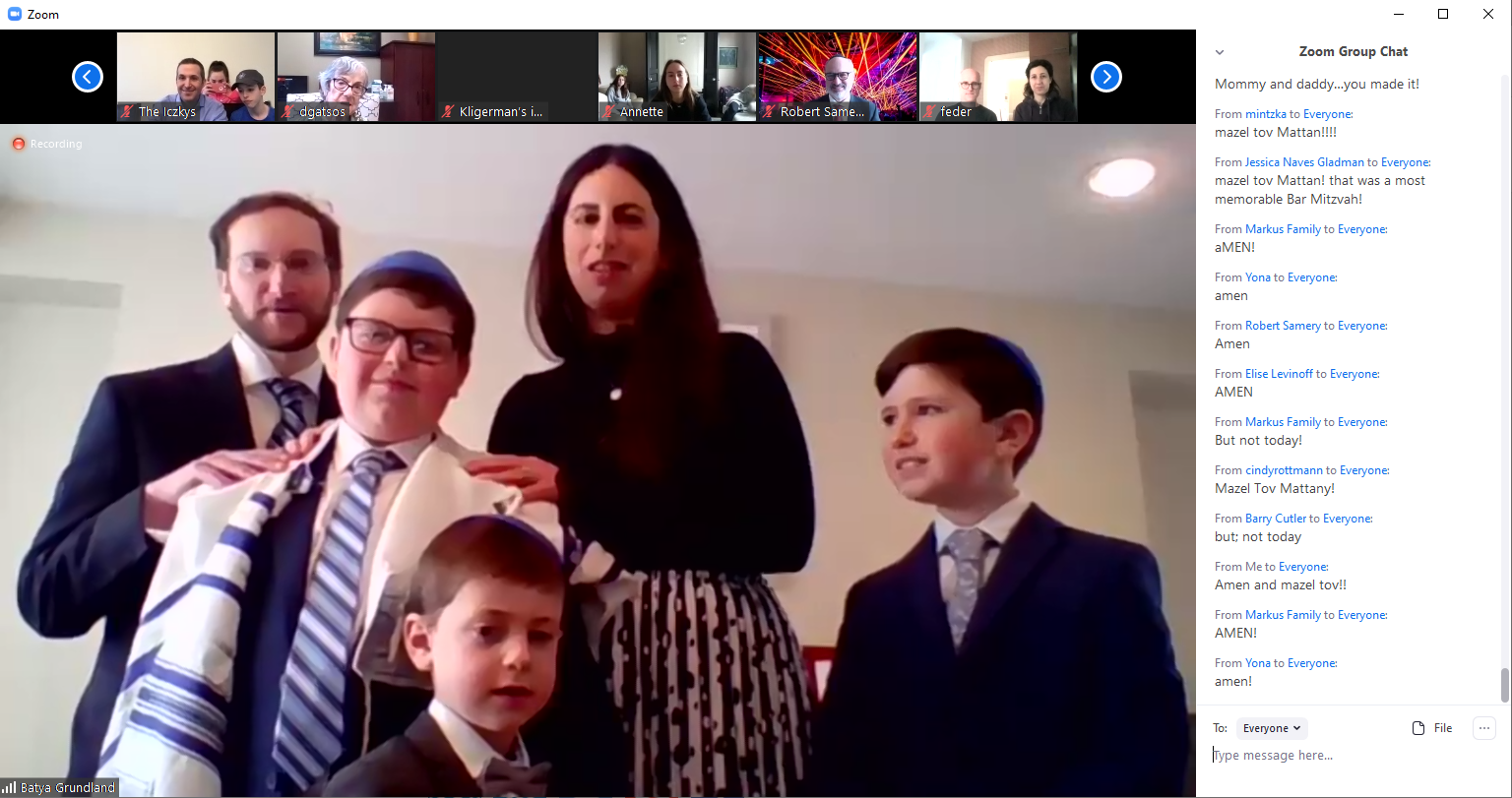 Batya: The decision to cancel came about on March 11. I had sent a note to out-of-town guests saying we totally understand if they’re not comfortable travelling. In the morning, I was worried that my parents, who had just come back from a trip to Florida, wouldn’t be able to attend if they became symptomatic. When I was at work, I had a patient who met the criteria for a Covid-19 swab. I started freaking out to a colleague about potentially getting sick myself and having to miss my son’s bar mitzvah. I was picking up my kids from school that afternoon, and a rabbi from a different synagogue told me that he predicted all synagogues would be closed in two weeks. When I realized what that might mean, I broke down in the hallway. We decided to cancel that evening. That was the same night the NBA shut down and Tom Hanks announced he’d tested positive.

Mark: Family and friends were thankful for the decision. They’d been reading what was happening in the news and holding their breath. They were committed to coming, but were starting to feel fearful, and didn’t know how to tell us. We could tell there was a large sigh of relief and appreciation. At the time we sent out the email, the TDSB hadn’t shut down yet. If we’d waited another day, it would have been out of our hands. 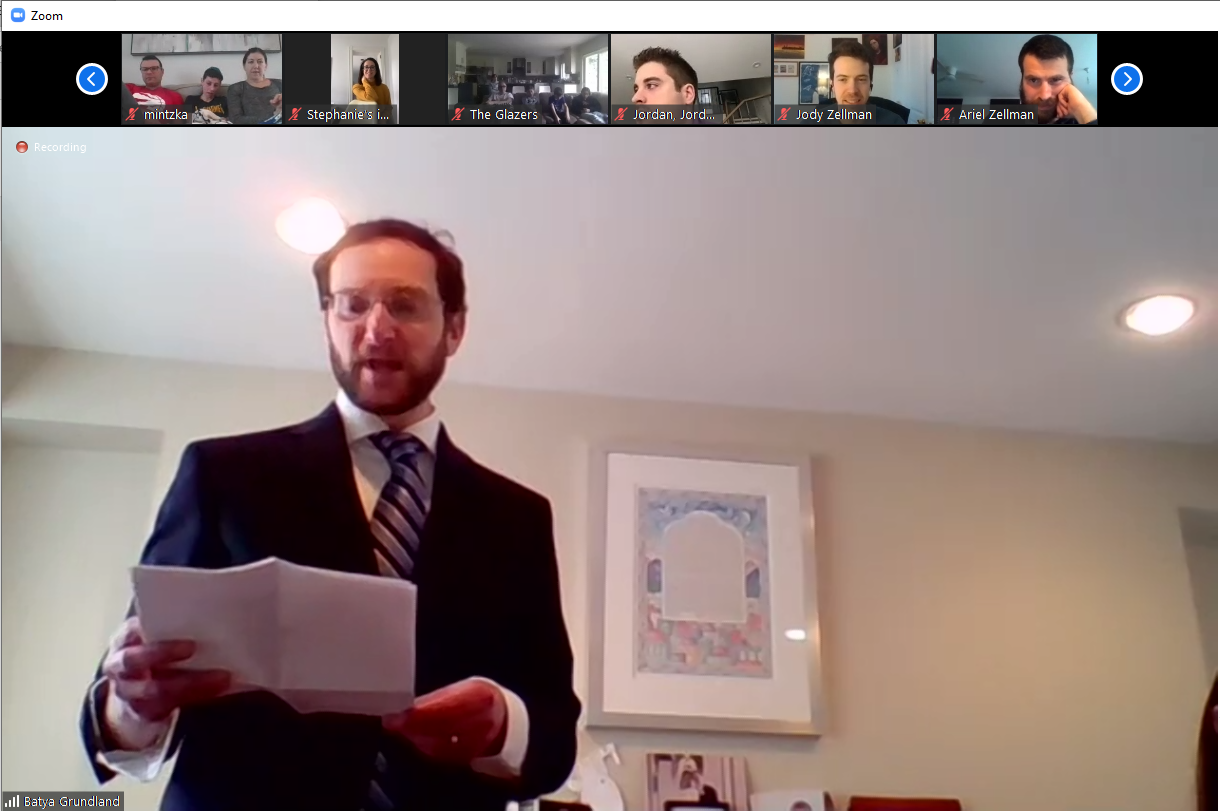 Mattan: It was sad but also a relief, because of everything that was going on in the world.

Batya: Mattan was great about it. He was disappointed mostly because he’d been studying material for 14 months. But by the next morning he accepted the situation. I went to the synagogue and told them we’d need to postpone the event. The director and vendors were great. I hadn’t paid balances, so everyone kept their deposits. The hope is we can host the party eventually, and pay them in full then. Our alternative plans kept changing as the situation evolved. First, we planned a private ceremony with just our immediate family—which is like 50 people.

Mark: We were going to use a big room at the synagogue, and have people sit two metres apart.

Batya: That plan kept getting smaller and more limited. Then, the rules about self-isolating after travelling set in, which meant my parents wouldn’t be able to attend. My 96-year-old grandmother, who lives in a retirement home, also wouldn’t be able to attend. It got to the point where anything in person didn’t make sense. I emailed one of my colleagues, who is a public health physician and an observant Jew, and asked him what he recommended. He said the safest thing would be to do it virtually.

Mark: On March 13, Batya and I were both given Zoom accounts through work, and we started using them for remote teaching and appointments. Around the same time, we read about a bar mitzvah in New York that had happened over Zoom. The next day was Mattan’s birthday, so we ordered an ice cream cake and decided to invite our family to a Zoom meeting to sing “Happy Birthday.” Mark’s parents have bought him, his sister and each of their children ice cream cakes for each of their birthdays for as long as they can remember. We realized the Zoom experience was simple and smooth enough. It took some legwork to get our parents involved, but it was feasible. 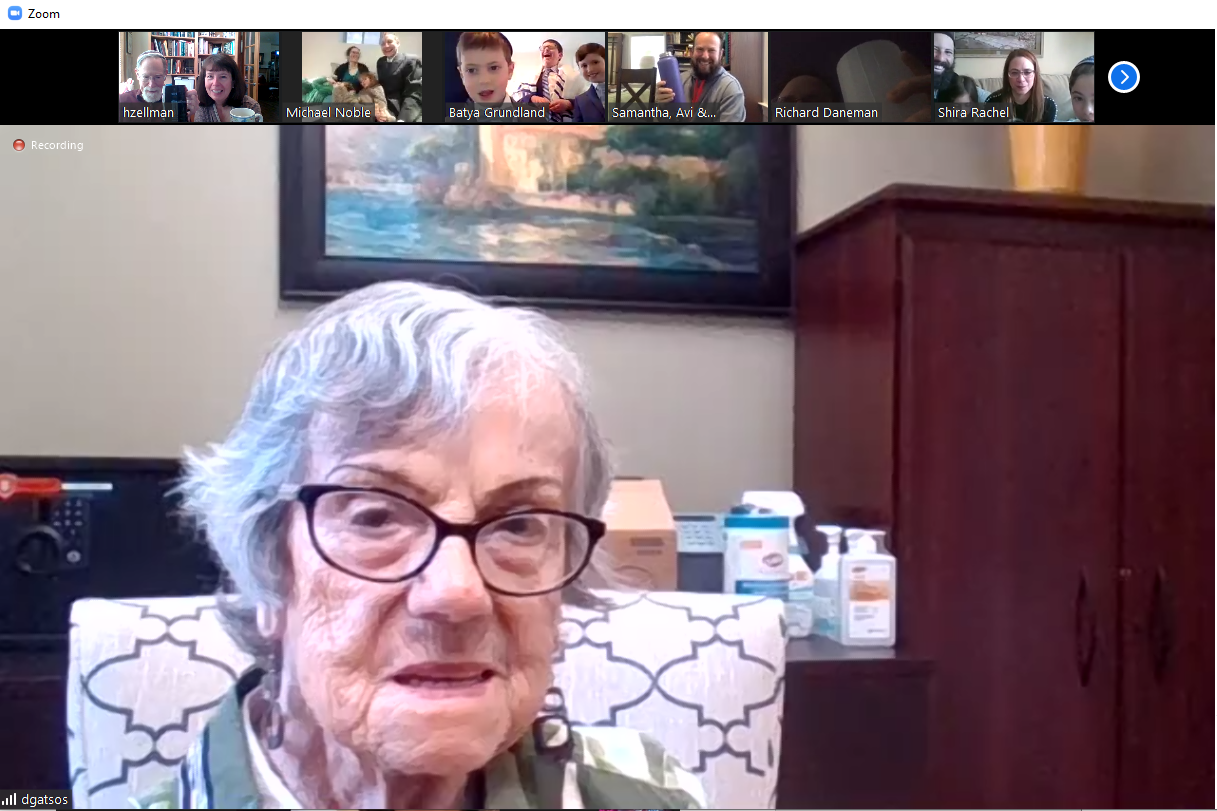 Batya: We invited the guest list to a bar mitzvah over Zoom, on the original party date of Sunday, March 22. On the day, we had between 60 to 70 devices logged in, which amounted to over 200 people. My 96-year-old grandmother was able to Zoom in from her retirement home. Traditionally, in a synagogue, the bar mitzvah boy is called up to the Torah, and 10 people are invited to say a blessing before he reads his portion, which we couldn’t do while livestreaming. The Torah reading is also usually only done on a Thursday or Saturday. We couldn’t do it on Saturday, because there are a number of people in our family who are observant and couldn’t use electronics. The main goal was for Mattan to demonstrate all he’d practised over the last 14 months. Instead of having people called up to read blessings, we invited our parents and his aunts and uncles to give a word of advice via Zoom before he read his portion.

Mark: Zoom allows for you to chat with anyone in the meeting. To be safe, we muted everyone so background sounds wouldn’t interfere with the readings. We all got dressed up. Others got dressed up, too: Batya’s parents were in their kitchen in a tuxedo and full formal wear. The rabbi, on the other hand, is a massive Boston sports fan, and he showed up onscreen in a Red Sox sweatshirt. It was the most commented-on aspect of the event.

Batya: Our 10-year-old son, Benjamin, served as the master of ceremonies. Mattan read his portion from the dining room table and recited commentary he had written. When he finished, we invited our rabbi to lead us through some blessings. At one point, Mattan’s friends read a speech they’d prepared, and at the end, Mark and I both said a few words. Often, when the bar mitzvah boy is done doing his bit, the congregation throws candies at him. We had Mattan’s brothers throw candies at him instead. At the very end, we did an impromptu toast, where those who were left online got a little glass of something.

Mattan: It was nice but kind of sad, since I got to see everyone but I couldn’t be there with them. 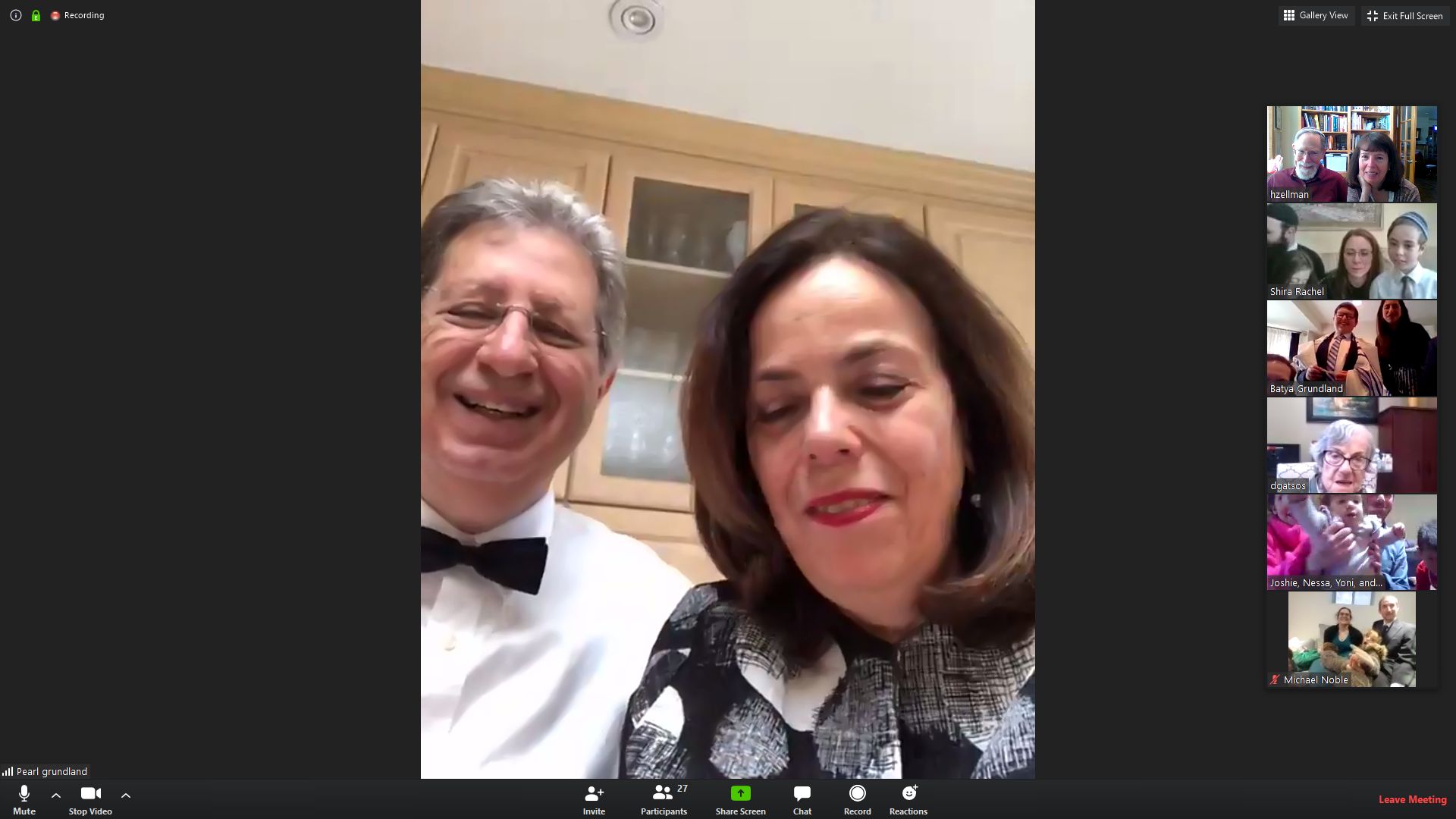 Mark: It was a bit lonely not being able to hear reactions. After we saved the video we saw a whole list of comments, which helped us relive the event.

Batya: This was obviously not what we planned, and one day we still hope to do something in person. But given the circumstances, it ended up being a beautiful, memorable and meaningful event. We were so grateful to be able to have our friends and family be a part of it, and they were grateful as well—and not only because it gave them something to do on a Sunday morning stuck at home.

Mark: The net outcome is that it became more memorable than it would have been, which was totally unintentional. The technology also allowed for people to attend who weren’t originally going to be able to make it, so there was actually some benefit to having to do it this way.

Mattan: I’m very excited to have the luncheon eventually, as there won’t be much pressure and it will be this happy moment where I’ll know I’ve finally completed my bar mitzvah. 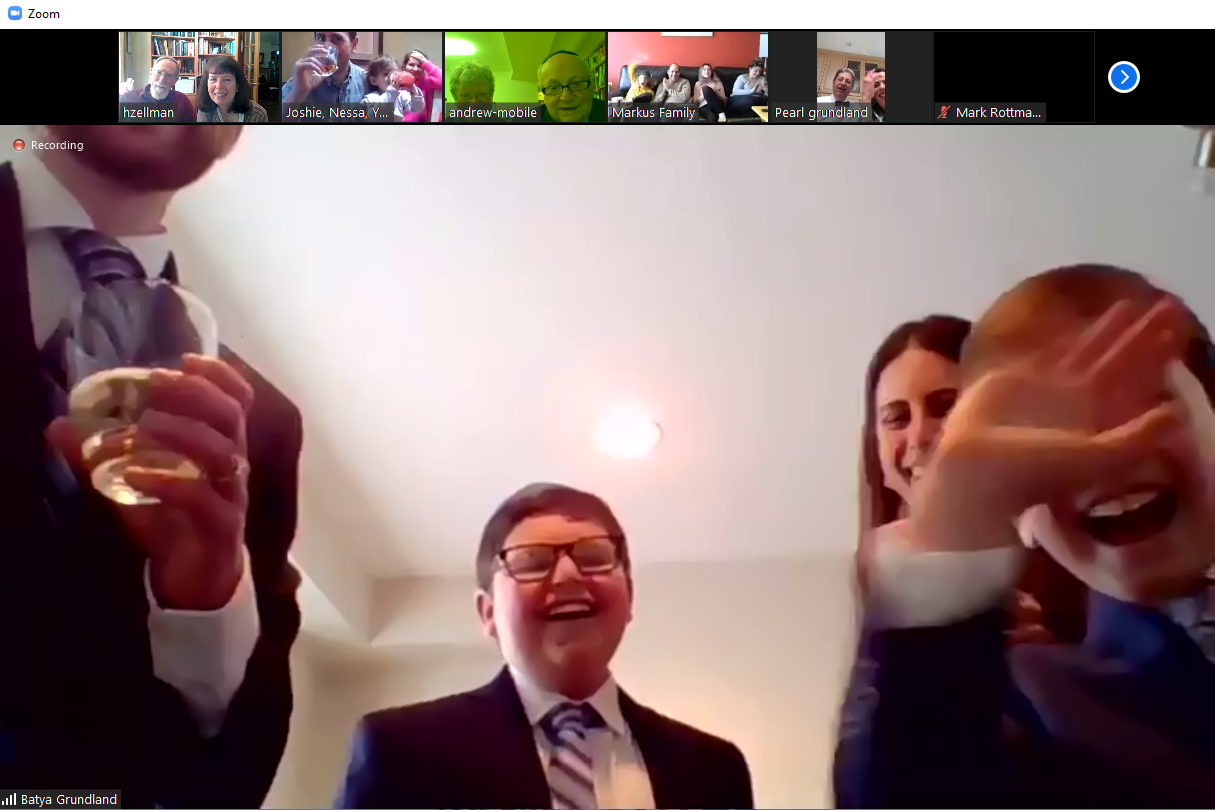