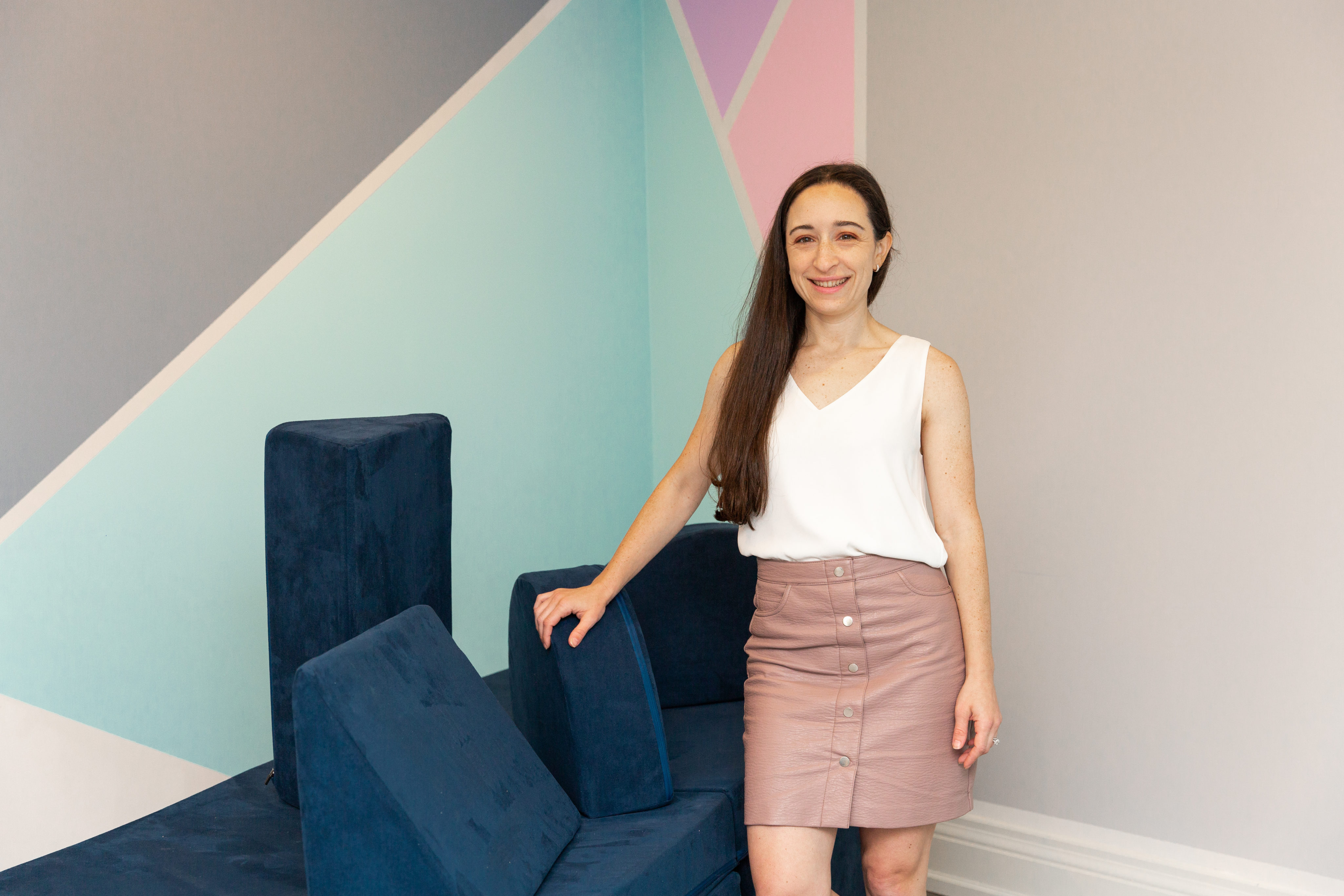 As an accountant, Sara Feldstein spent the early months of the pandemic attempting to work 10-hour days at home while also taking care of her two young daughters. Soon she was depressed and burnt out and had to make a major change in her life. So took a leave of absence from her job and ended up doing a complete 180: starting her own toy company, Barumba Play. Here’s how it happened.

“My grandfather was a CPA, my father was a CPA and since high school, I always knew I wanted to be one too. For the last 10 years, I worked at my father’s accounting firm, and I planned to take over from him one day. I never thought in a million years I’d be doing anything different.

“But then came the pandemic. The firm works with a lot of small- and medium-sized businesses, and they were all suddenly finding themselves shutting down and unable to pay their rent. I was bombarded with clients calling for advice, all while I was trying to figure out the new government assistance programs. Plus it was tax season. I ended up working 10 hours a day, while also looking after my two daughters, Emma and Madison, who were one and three. Day cares were closed, and my husband works in construction, so he was out of the house most of the day.

“My days would begin at 6 a.m., when my kids would get up. In between tax returns, emails and Zoom meetings with clients, I was changing diapers, making snacks and cleaning up spills. Even though my husband, Jonathan, would get home in the afternoon so I could focus on work, the kids would still always come to me whenever they needed something. The longest I could work without interruption was 20 minutes. Once the kids were asleep, I’d get back to work, reviewing files with employees as late as 10 p.m. I’d finally stop working around midnight. It was just too much. It was not sustainable. And it wasn’t fair to my clients, my employees, my family or myself.

“By mid-May last year, my mental health was tanking. I was exhausted all the time. I couldn’t focus or retain information. I just wasn’t interested in work anymore. I tried to work through my burnout, thinking that if I just kept going and putting in more and more hours, I’d get past it. But it didn’t work that way—especially when Covid didn’t end. Every day I felt like I was drowning a little bit more.

“I wondered, How is everyone else joking about their kids coming into their Zoom meetings? How are they working and watching their kids? How come I can’t do it? But when I talked to my friends and colleagues, I realized they were struggling too. Soon I realized I had no choice but to step back from my job. I didn’t want to do it, but the burnout was destroying my life.

“I officially stopped working at the end of July last year. My husband was still working and I had some savings, so I told myself, take three months to recover, don’t worry about anything for August, September, October, and then figure it out. But when November hit, I still wasn’t in the right headspace to go back to accounting. I thought, what am I doing with my life? 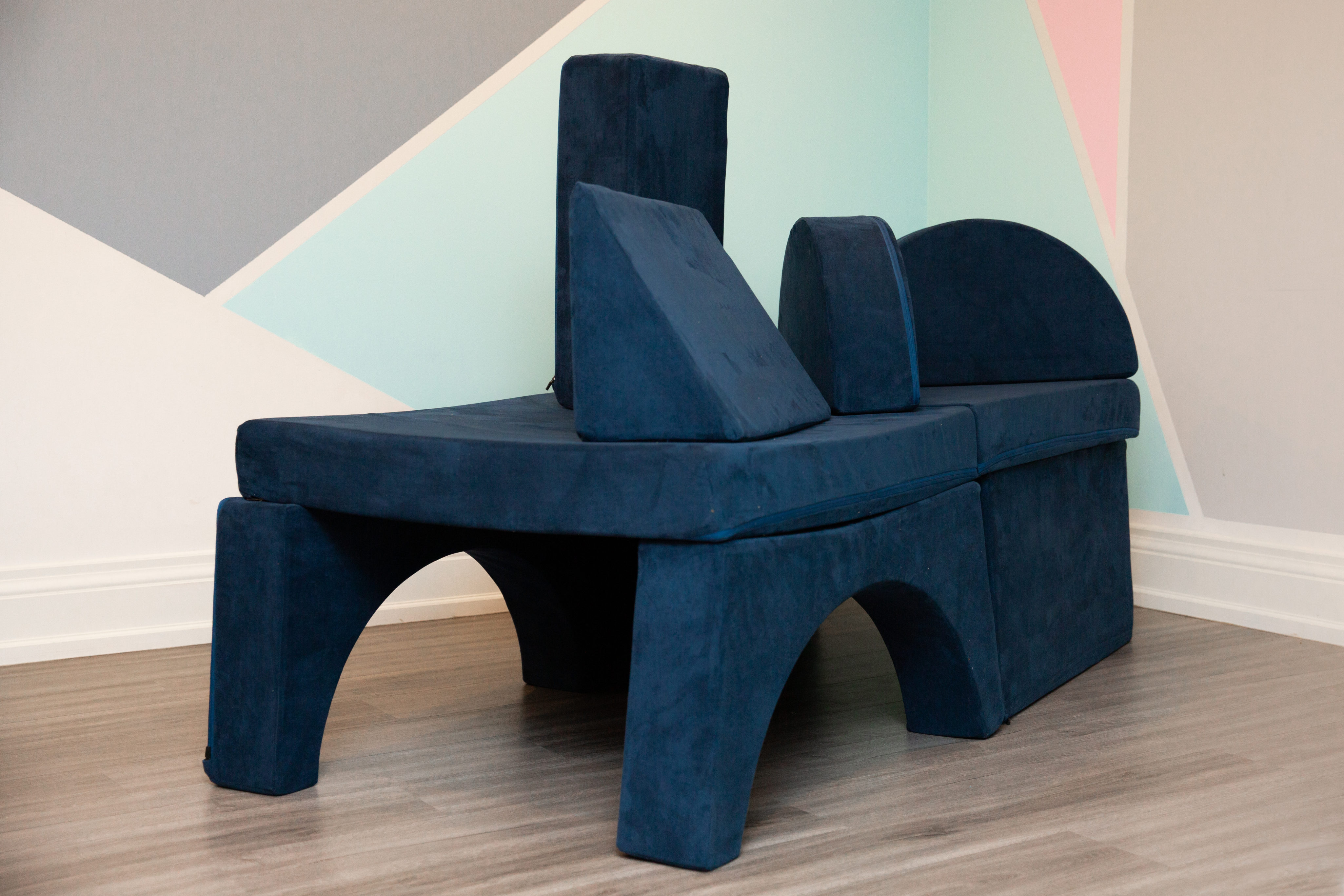 “That’s when it came to me: toys. During the pandemic, toys became the only thing that kept my kids occupied. Realistically, I couldn’t watch my kids every second while I was working, and they couldn’t be on screens all day. So I end up giving them toys to keep them entertained. I relied on them as a support system. But there were lots of toys I’d see and and think, Are parents involved in designing these toys? We have some toys that are dry clean only or toys that don’t have any built-in containers to store the million little pieces they come with. We have a stuffed elephant that literally only sings one song—it’s cute, but the kids got bored of it so fast. I realized I wanted toys that could do more than one thing and evolve as the kids got older. Like instead of a walker that only helps the child learn how to walk, maybe it turns into a baby stroller for dolls. I thought, how can we make sure toys last longer and can be used in the next stage of a kid’s development?

“In December, I first got the idea for a play couch. I was chatting with my sister while our kids played with small foam blocks that come in different shapes. We were talking about how our kids would love it if the foam arches were big enough to crawl through. I thought it would be amazing to make them life-sized so that kids could build forts with them, or slide down them, or climb them.

“I did a bunch of drawings and measurements, then showed my designs to people and their kids for input. Once I nailed down the design, I found a product designer based in Paris who could turn my drawings into 3-D foam renderings I got my first prototype of my play couch this past March and spent a month driving it around to family, friends and strangers from Facebook mom groups to get feedback. I made a couple little tweaks to the prototype—a denser foam so the arches wouldn’t wobble, a softer material to avoid rug burn—but for the most part it worked pretty well. 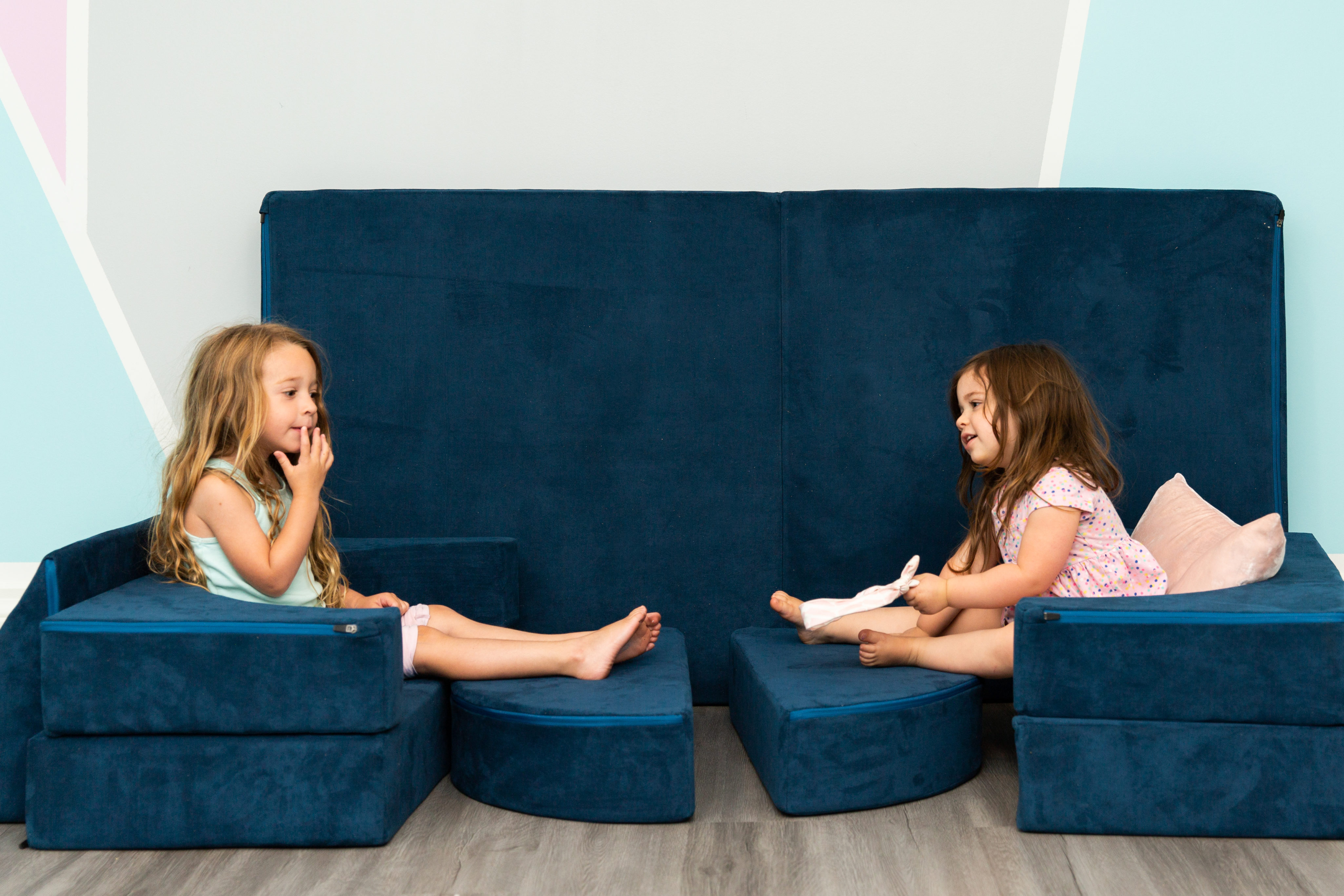 “I officially launched Barumba Play at the end of May and I’ll be fulfilling our first pre-orders in October. The couch, which sells for $649, has 11 pieces covered in washable microsuede. There are waterproof liners underneath each cushion, so if there’s a sippy cup spill or a potty-training accident, the covers can go into the laundry and the foam is protected. The zippers are covered so they don’t scratch floors or walls, and there are handles so kids can drag the big piece around.

“My kids—now three and five—love to use the pieces to make giant chairs, obstacle courses, tunnels, mazes, a performance stage, forts, a restaurant booth and a tea party set-up. It’s also really comfortable when you use it as a couch.

“My goal is to basically reinvent the playroom. To make toys modular, easy to store, easy to clean. I want toys that do more so that we can have fewer in our homes. I’m not trying to be a billion-dollar company here, but I think there are enough families out there who want those kinds of toys. Parents are just overwhelmed with toy clutter. I bet there are a lot of parents who were happy when birthday parties were cancelled—myself included—because otherwise I would have ended up with 20 more Elsa toys. Like, at a certain point, it’s enough.

“I’m getting to explore a whole new creative side. Accounting is all black and white, while toys are like a world of colour. It’s a complete 180. And yet I’m still able to apply what I learned in accounting. For so many years I was observing what makes businesses fail or succeed, learning what software to use, how to price things. Now I’m using that knowledge now as an entrepreneur.

“My new business is stressful, of course, but at least now I’m in control. Before I would think, Oh, I don’t have time to exercise or go outside. I’m so busy with kids and work. Now I’m aware that these things matter. I’ve realized that it’s not selfish to take care of yourself.” 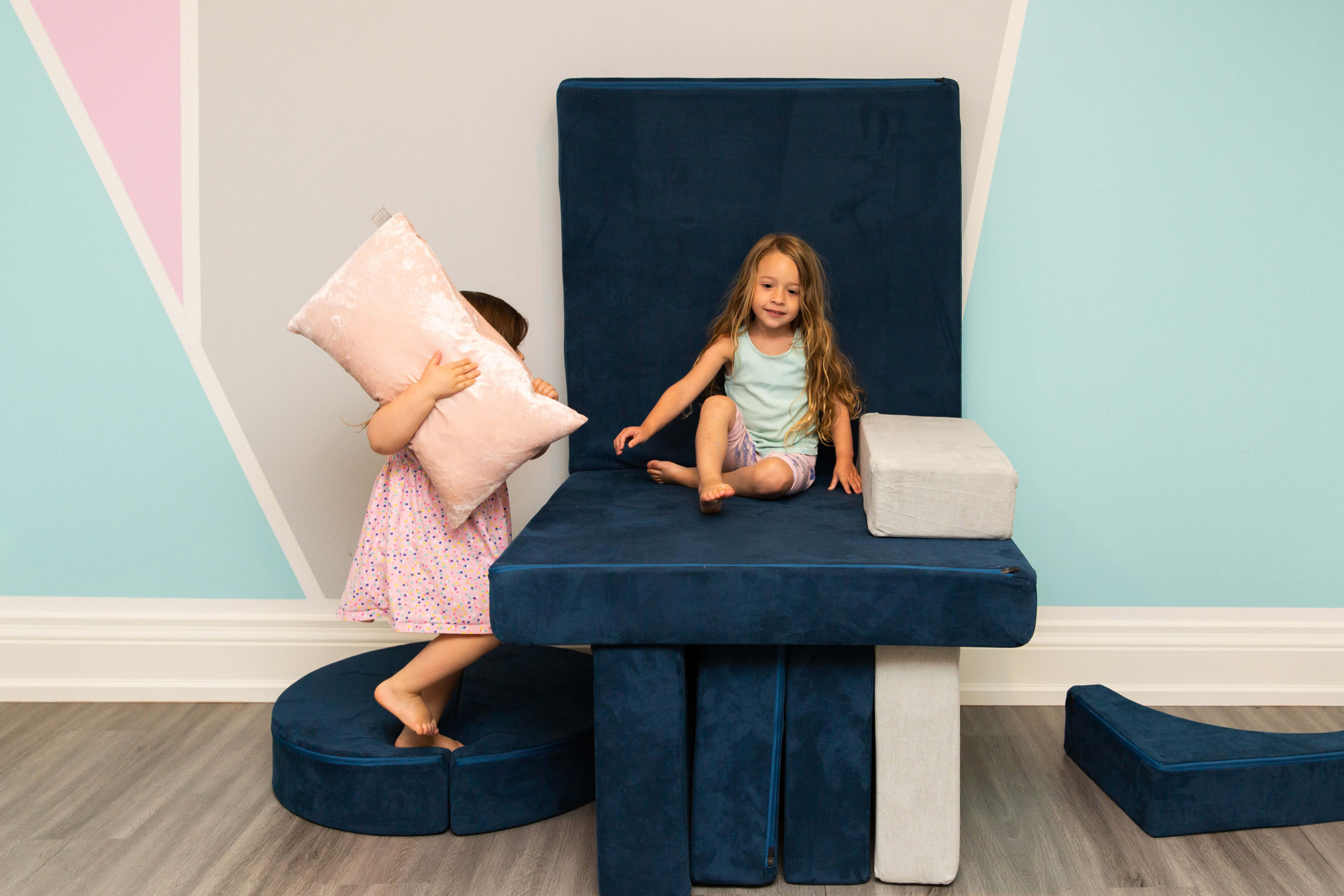