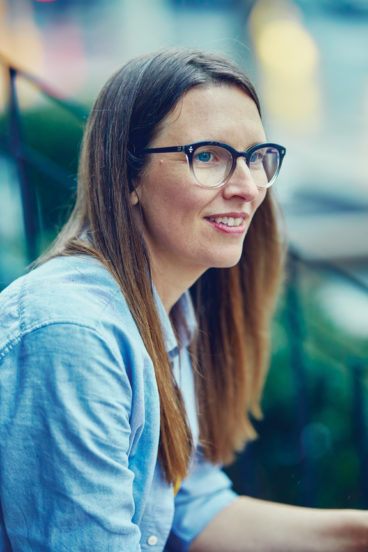 “I went green. Maybe a little too green”

I’m a registered massage therapist by training, and I’ve always been the hippie in my group of friends—earthy, a little kooky—so maybe I was destined to lead a planet-conscious, zero-waste lifestyle. I don’t know. What I do know is the moment it became a certainty: November 2016, when I read that one million coffee cups go to landfill each day in Toronto. I was floored. I wasn’t naive enough to think I could save the planet on my own, but at least I could reduce my impact. Then and there, I decided to change my life wholesale: I’d cook everything from scratch, make my own beauty products and quit plastics entirely. My household of three would go zero waste, or as close as we could get to it.

Mick, my husband, was in bed reading when I delivered the news. He’s an even-keeled type of guy, an accountant by training who is now a craft beer salesman, and is in almost all regards unfazable. We’d always been responsible recyclers. We walked, cycled or took transit everywhere and focused on buying local and organic. So maybe he thought the transition would be painless. To that point, he was the primary chef at home and the main fetcher of groceries, so maybe he just figured I’d take over those tasks (which I eventually did). Or maybe he was just engrossed in his book. He smiled in his supportive way and said, “Okay, ecowarrior.”

Step one was to become accountable, so I started an Instagram page where I’d document what I was making, how much I was wasting and how it was all going. I wanted to use the power of social media to keep myself motivated. I figured I’d be able to learn from others, too. I brainstormed a few names and, before long, @yourecofriend was born.

The early days were exciting and intense. Using locally sourced, organic ingredients, I whipped up one-pot bone broths, sauces, stews, casseroles and soups. Mick was a devoted omnivore who loved the occasional steak; I wanted to move to a fully plant-based diet, so I introduced dishes like lemon basil vegan ricotta lasagna, red lentil coconut curry and tempeh tacos, and then ramped up their frequency. When we’d eat out, I’d bring containers for leftovers. We loved ordering delivery from a nearby Indian place, but the packaging, abundant to the point of absurdity, ruled that out. When we asked if we could bring our own containers, they occasionally accepted if they weren’t too busy but usually said no. That was a tough one for Mick, but he adjusted.

After a lot of trial and error, I learned to make my own deodorant (shea butter, coconut oil, arrowroot flour and baking soda), body butter, household cleaners, laundry detergent and glue (water, flour, sugar and vinegar). As for shampoo, I decided to go “no ’poo”—that is, washing my hair with only water. In place of paper towels, we sliced up tired sheets and T-shirts; instead of plastic wrap for food, we used jars; instead of facial tissue, we cut up old flannel; instead of shaving cream, we used bar soap; and we all but eliminated new clothes by buying second-hand. For our daughter, Nyla, who’s now six, I’ll admit that we did use disposable diapers, albeit the more eco-friendly brands, because I was in the depths of post-partum depression and couldn’t handle the mental stress of washing cloth diapers. Over time, I became involved with community groups like the Toronto Tool Library, Toronto Environmental Alliance, Green Neighbours Network, GreenPAC and the City of Toronto Circular Economy Working Group. And I joined the council at my daughter’s school, where I advocate for low waste and community engagement at our fundraising events. 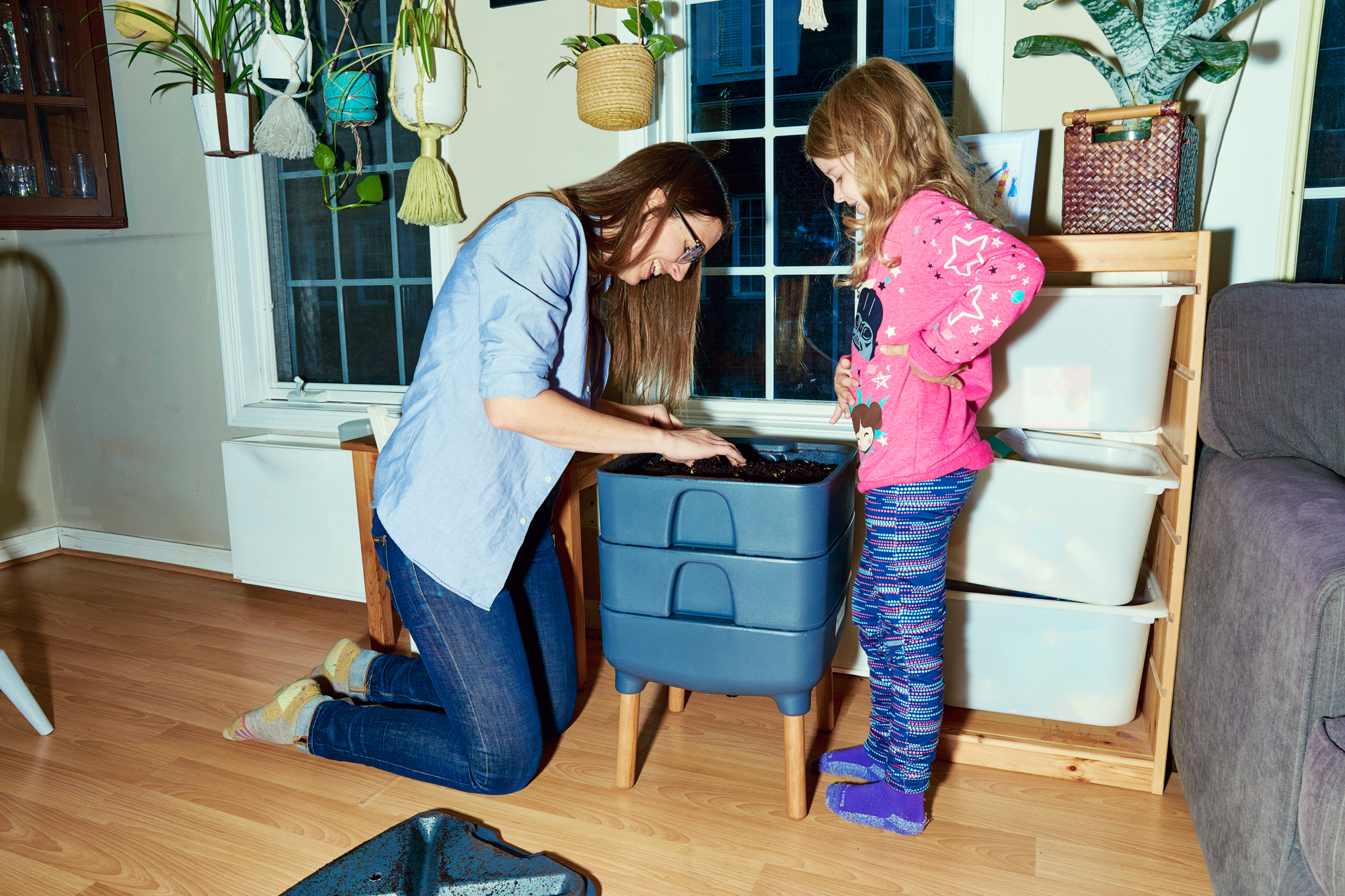 The change was epic. In a few months, we’d gone from your average Toronto family, living a life of relative convenience with occasional thought to environmental impact, to militant zero-wasters, evaluating every action for its carbon footprint. We’d gone from producing maybe two grocery bags of garbage a week to one grocery bag every three to five months. I thought it was going great, and our daughter had no complaints—then again, she’d never known anything different. Mick, however, was less than pleased. I’d unilaterally transported our family to an extreme fringe, and the adjustment was hard. Dog-poop bags were verboten, so Mick would use old newspaper. Of course, our beloved beagle, Mort, would inevitably catch a scent and tug hard at the leash mid-scoop, sending poop flying across the sidewalk, which would result in Mick scrambling to retrieve individual nuggets. Like many people, Mick enjoys a splash of milk in his coffee. Because store-bought milk comes in disposable packaging that often ends up in a landfill, I banned it, and we made oat milk instead. But that requires soaking oats then blending them with water, which takes roughly 10 minutes. Frequently, we’d run out, which is a mild-to-extreme nuisance depending on your fatigue level. On occasion, I would hear from the kitchen, “I CAN’T LIVE LIKE THIS!” It was mostly jokingly. Eventually, Mick issued a dairy-based ultimatum: either I had to keep the oat milk stocked or he’d keep a carton of store-bought milk on hand. I agreed to make it and keep it stocked.

At first, I didn’t realize how big the dairy debacle was for Mick, but he recently confessed that at one point, he had said to a friend: “If this insufferable woman doesn’t let me buy a carton of milk, I might have to leave her.” (Again, joking, but ouch!) As I reassessed how my zero-waste endeavours were affecting him, I started to recognize how they were affecting me, too. Everywhere I turned, I saw waste—every street corner, coffee shop, dinner party, bus ride and walk through the park. It bothered me that most of the people I interacted with didn’t seem to realize how we were treating the planet. And now I was thinking about it non-stop. I was also spending an inordinate amount of time baking, cooking, grinding and puréeing, and not as much time on my massage business, or with my family without the self-induced pressure of being the perfect environmentalist.

And so, nine months after we’d started, I rethought the entire undertaking. Reducing waste, I decided, doesn’t have to mean DEY (do everything yourself). I resolved to stop making bread, since I could buy it directly from a family-owned bakery who let me put the unwrapped loaf into my cloth bag. I gave up on making vanilla extract, toothpaste and bar soap, since I could find them in bulk at Karma Co-op in the Annex, Bare Market on the Danforth, Unboxed Market on Dundas and various shops in Kensington Market. I decided to stop with the no ’poo (it just wasn’t working for me), and refilled my shampoo container at Bare Market.

As for Mick, I had to change the way I interacted with him. I decided to stop the constant eco-nagging and just focus on my actions; he could join in if he wanted. As a peace offering, for Valentine’s Day, I asked some friends to source plastic bags from their workplaces, and gave him a parcel of poop bags as a gift. What can I say? I’m a hopeless romantic. Eventually, Mick got into the groove on his own. He now brings his own travel mug with him, happily uses rags instead of paper towels and even got into the habit of making his own oat milk, which he boasts to friends about—I help out if I notice we’re running low. Recently, he went to the dentist and texted me a photo: he’d brought a cloth napkin so he wouldn’t have to use the disposable bib. I fell in love all over again.