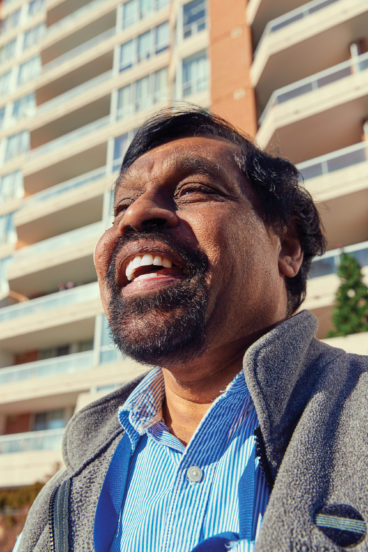 For more than 20 years, Princely Soundranayagam has been superintendent of the Mayfair on the Green III condo in Malvern. Since 2008, thanks to his recycling and reuse programs, he’s managed to cut the building’s waste by 88 per cent. He’s not stopping there.

How did your waste-reduction efforts begin?
Twelve years ago, our building’s reserve fund was getting low, and management wanted to increase maintenance fees to compensate. We used to fill eight dumpsters each week, which cost a lot of money. We asked residents to recycle, but they were lazy about it. They would throw out cardboard boxes, bottles, clothes and more. So I went to each door and explained to everyone that because we were spending so much on garbage collection, fees were going up. Residents asked how they could prevent it. We handed out clear plastic bags and asked residents to collect their recyclables and bring them down to the basement. We converted our garbage bins to recycling bins and turned our garbage chute into an organics chute.

Were the residents receptive?
Yes. They didn’t mind taking their garbage and recycling down in the elevator. The elevators don’t get smelly because it’s the organics that smell, and those go down the chute. We had some challenges with seniors and sick people. We told them that if they’re unable to bring the recycling down on a particular day, they could put it outside and call me—my staff and I would pick it up.

Have you introduced any other waste-management innovations?
We supply glass jars so residents can collect used cooking oil, which we store in a drum in the basement. It gets picked up by a company called Green Oil, who pay us and then resell the cooking oil to recyclers to be processed as biodiesel products. We have a library in the basement with books and furniture donated by residents—stuff they were going to throw away. We also collect medicine and other hazardous waste. Last Friday, I collected 18 cans of paint and 12 pounds of pills and tablets. Every two or three weeks, the city sends a truck for hazardous waste pickup, stuff like batteries, chemicals, medicine and fluorescent tubes. From eight dumpsters a week, we’re down to just one a month. We also send out 10 recycling bins and two green bins each week. People are very co-operative here.

You’ve developed a reputation as an environmental enforcer—so I guess they kind of have to be.
It can be hard with new residents. We tell them our rules when they register. For the first infraction, they get a warning; for the second, the building owner is informed; for the third infraction, they pay $50; and for the fourth, $100—but it’s never gotten that far. People get the message once they have to pay.

You’ve been so successful. Why haven’t more condos adopted your methods?
Some are trying. But they just ask their residents to bring their garbage down; they don’t apply a financial penalty. Not everyone understands the impact of their actions, so a financial incentive is very important. For our building, it has worked very well. We have almost $3 million in our reserve fund now.