Earlier this week, when the Canadian government warned against unnecessary travel to curtail the spread of the coronavirus, the response seemed appropriate. After all, we’re in the middle of a global pandemic: death counts are rising, markets are plunging and entire countries are shutting down. Hopping on an airplane seems like a reckless indulgence. So, we chatted with people in the international terminal at Pearson to figure out why the heck they’re travelling during the most tumultuous time in recent memory. 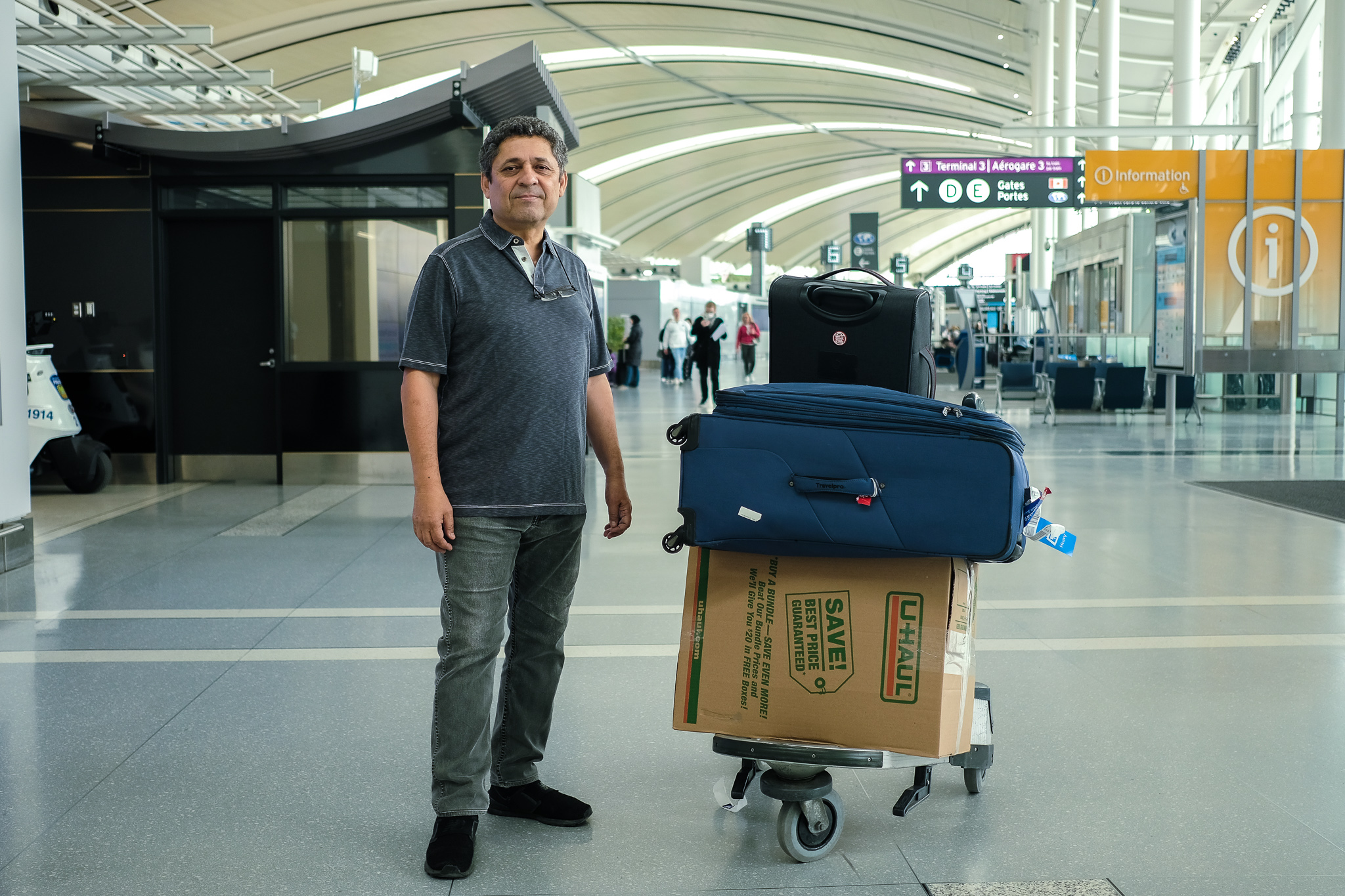 Where are you going? I’m travelling to Dubai for business.

Are you worried about the virus? I’m not worried. I just need to take precautions: like washing my hands, no handshaking, trying to keep a safe distance from everyone.

Are you worried about being stranded abroad? I work part time in Toronto, part time in Dubai. So, I was actually worried that flights would be cancelled and I wouldn’t be able to make it there for work.

How much hand sanitizer are you bringing? I brought enough sanitizer for myself. I’m flying business class and I’m happy to share, but hopefully the flight attendants have enough for everyone else.

What did your parents and friends say? My family is okay with it. 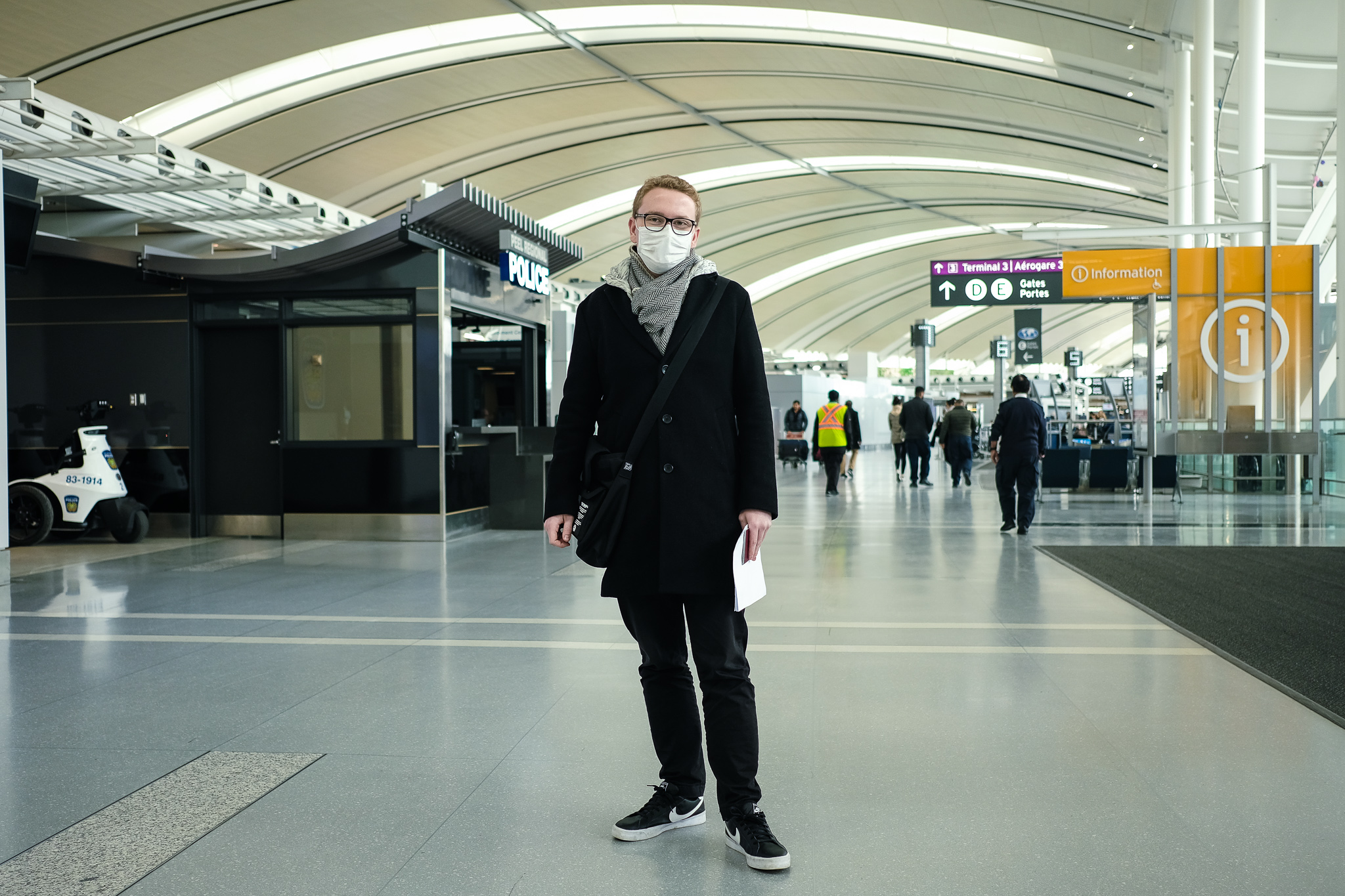 Where are you going? I have a ticket to Vienna via London.

When did you book your flight? I got my tickets in early January, but I’m not allowed to enter the U.K. because I was in South Korea. So, I’m hoping to change my ticket and connect via Frankfurt.

How much hand sanitizer are you bringing? I brought two small bottles of hand sanitizer that I use when I touch things, but I’m trying not to touch anything.

What did your parents and friends say? My parents and girlfriend are all worried. I just called them this morning to tell them I’m trying to get home. My flight is supposed to leave tomorrow, so maybe I’ll try to enjoy the day in Toronto. 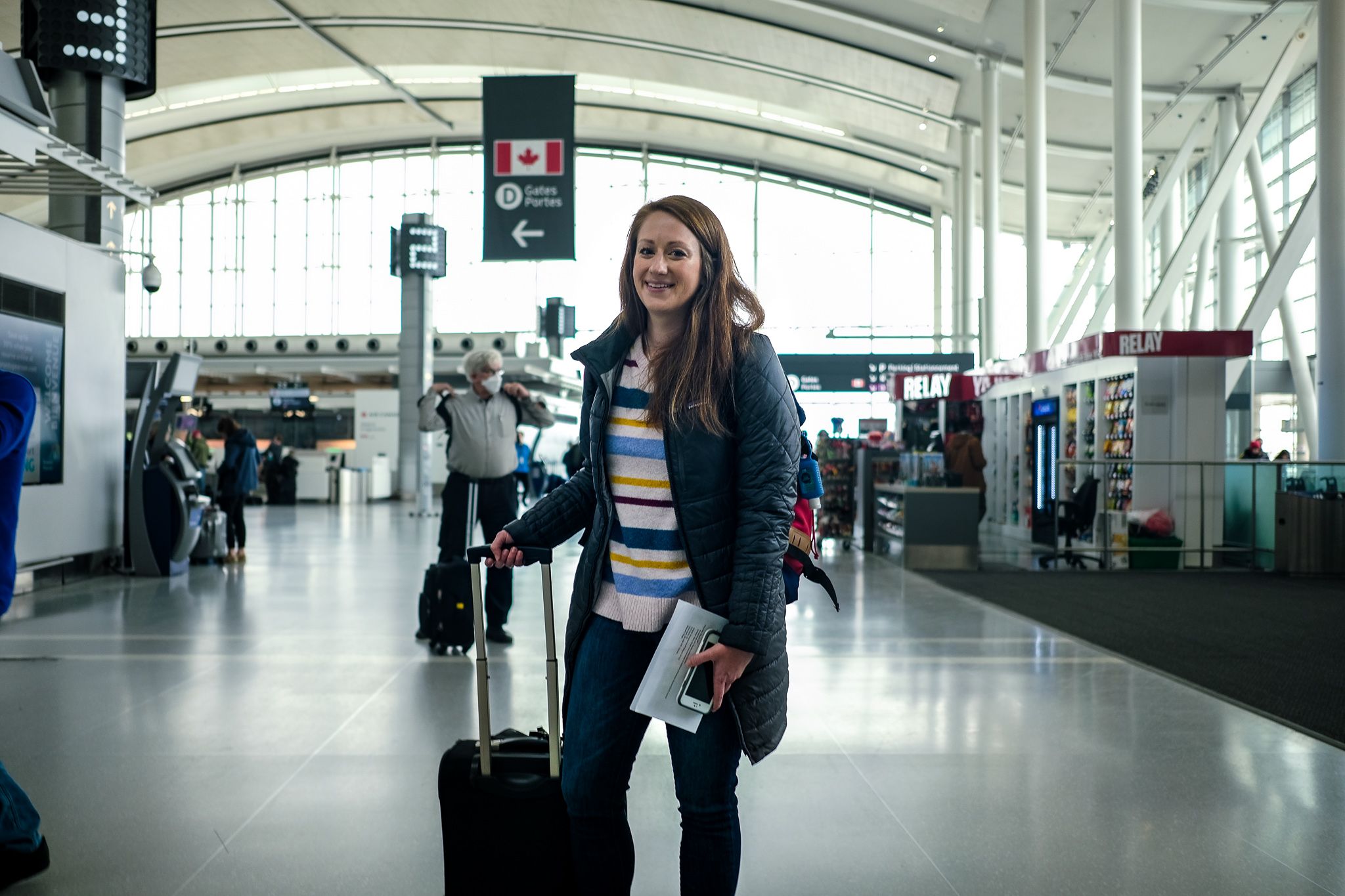 Where are you going? Back to Alabama, but my flight got cancelled.

Did you get a discount on tickets? I’m here for fun. I got some deals on travel up to Toronto, plus the student discount for Via Rail, but not any virus-related discounts.

Are you worried about the virus? I think that because I work in healthcare and the university I work with has been at the forefront of studying the virus, I guess I know a lot more than the general public. I know it’s something to worry about, but you’ll be fine if you take the necessary precautions and don’t have a compromised immune system.

What did your parents and friends say? My parents told me to go. My dad is in healthcare, so he was fine with it.

How much hand sanitizer are you bringing? I have one tiny bottle of sanitizer, a bottle of spray and some wipes. 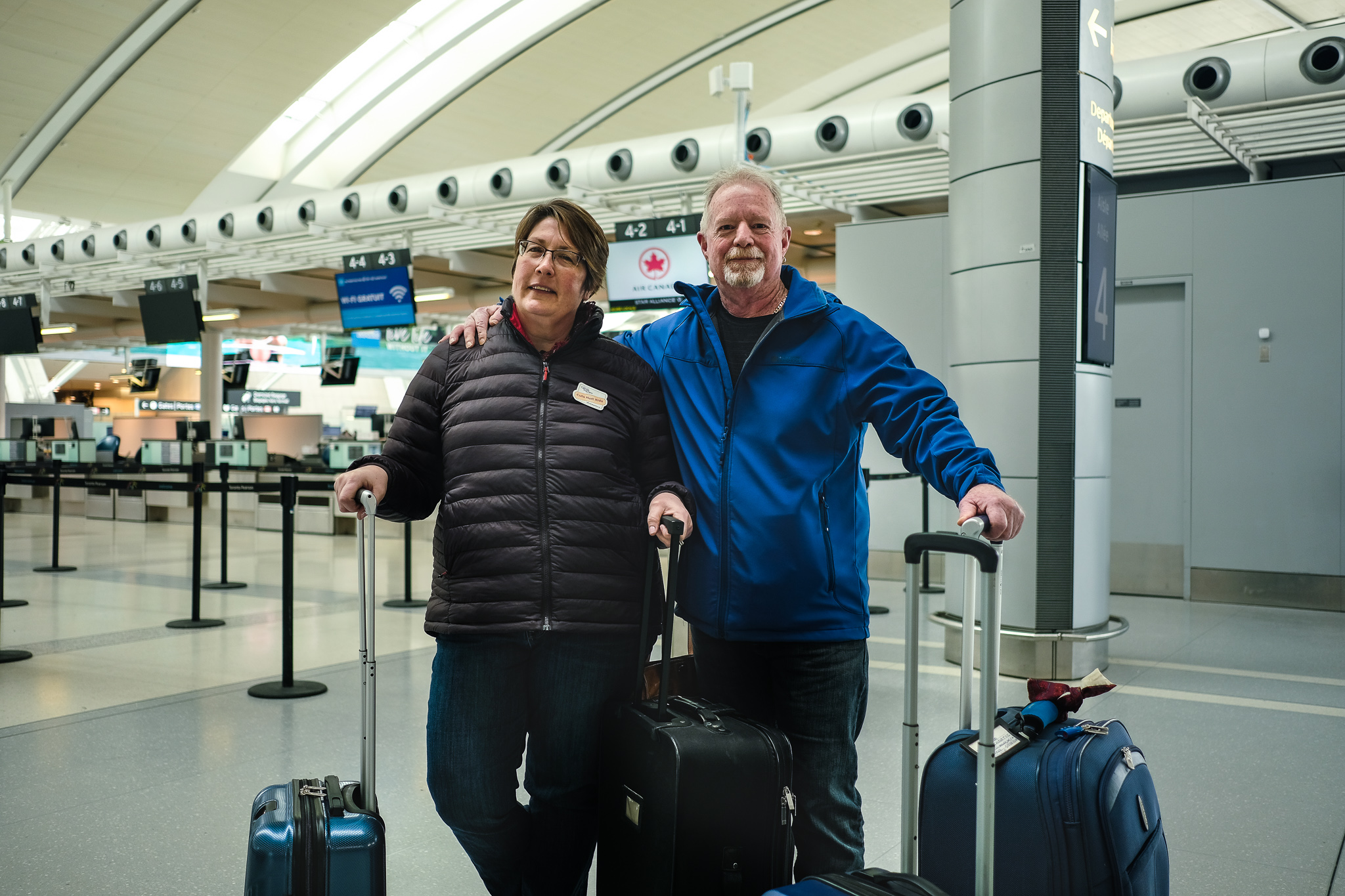 Where are you going? Ron: Varadero, Cuba.

Did you get a ticket discount? Stacey: We got our tickets about a month in advance, so no Covid-related deals.

Are you worried about the virus? Stacey: I’m not concerned about contracting the virus. My concern would be coming home and being quarantined for 14 days. I have three kids at home, so either they have to move out for two weeks or I have to find another place.

How much hand sanitizer are you bringing? Stacey: Oh, I have all the On Guard essential oils I could purchase. It’s a more powerful disinfectant than hand sanitizer.

What did your parents and friends say? Stacey: My kids are not impressed, because they think we shouldn’t be going. They’ve seen a lot of questionable, not necessarily accurate information in the media. They’re also concerned because my parents are on a cruise ship in Argentina. Ron: I only have a niece at home and she’s not concerned. In fact, she’s probably happy I’m gone! I’m a little perturbed by Air Canada that we weren’t able to cancel our flight, especially after Trudeau warned against unnecessary travel. I just feel there should have been a little more leeway with the cancellation policy. 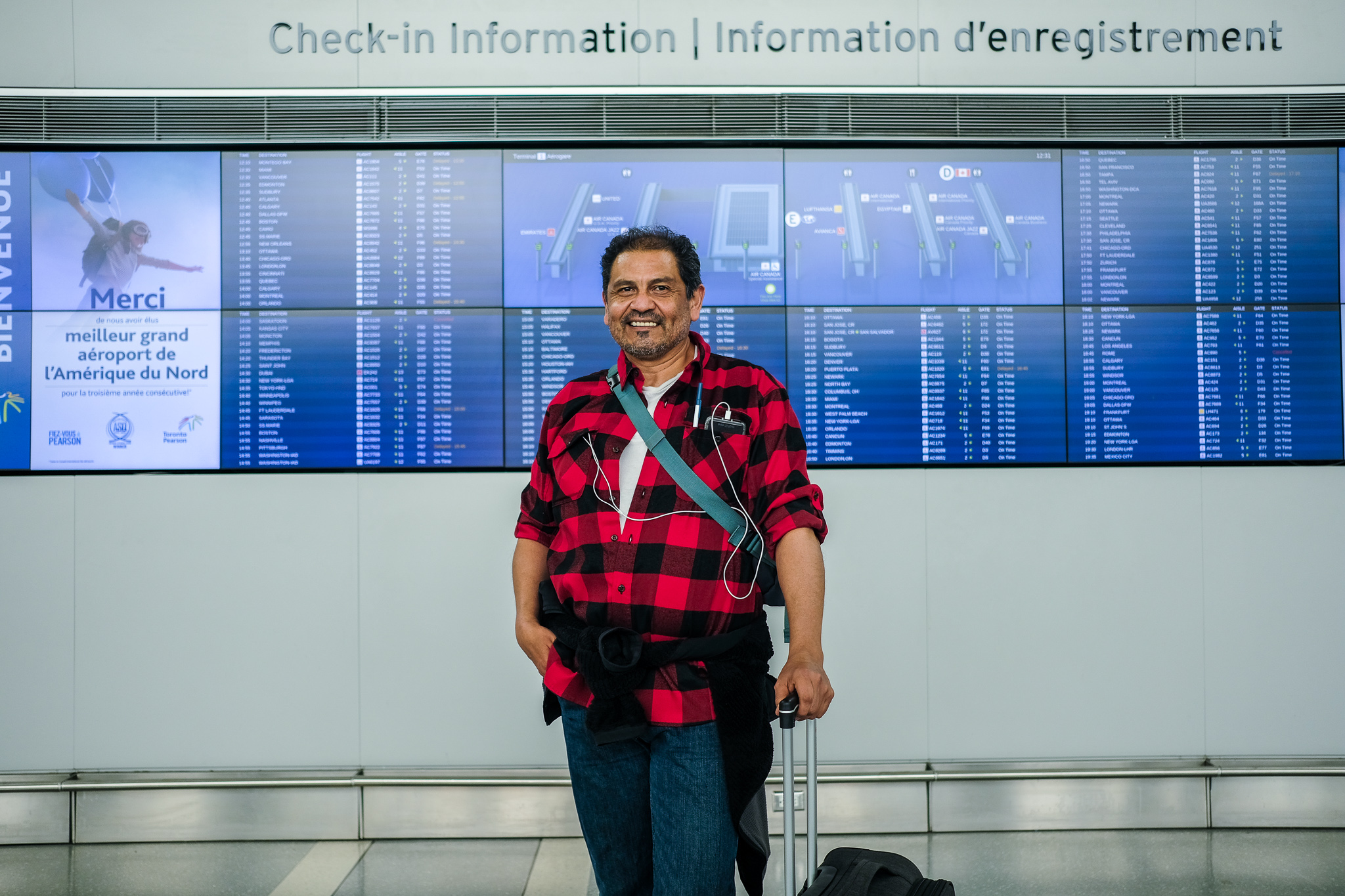 Where are you going?  My mom passed away this week and I’ve been trying to get to Guatemala for her funeral. But my flight was cancelled because it had to connect in El Salvador. Everything was planned for me to arrive yesterday, so I’m missing most of our ceremonies and they can’t change it. It’s disappointing.

Did you get a discount on tickets? No discounts at the moment. And I paid $100 for a cab to the airport and my flight is postponed until tomorrow.

Are you worried about the virus? I suppose I am a little bit, but not really because the chances seem very small. Apparently, there are no cases detected yet in Guatemala. They said they’ll soon be closing the borders to visitors coming from Canada and the U.S. 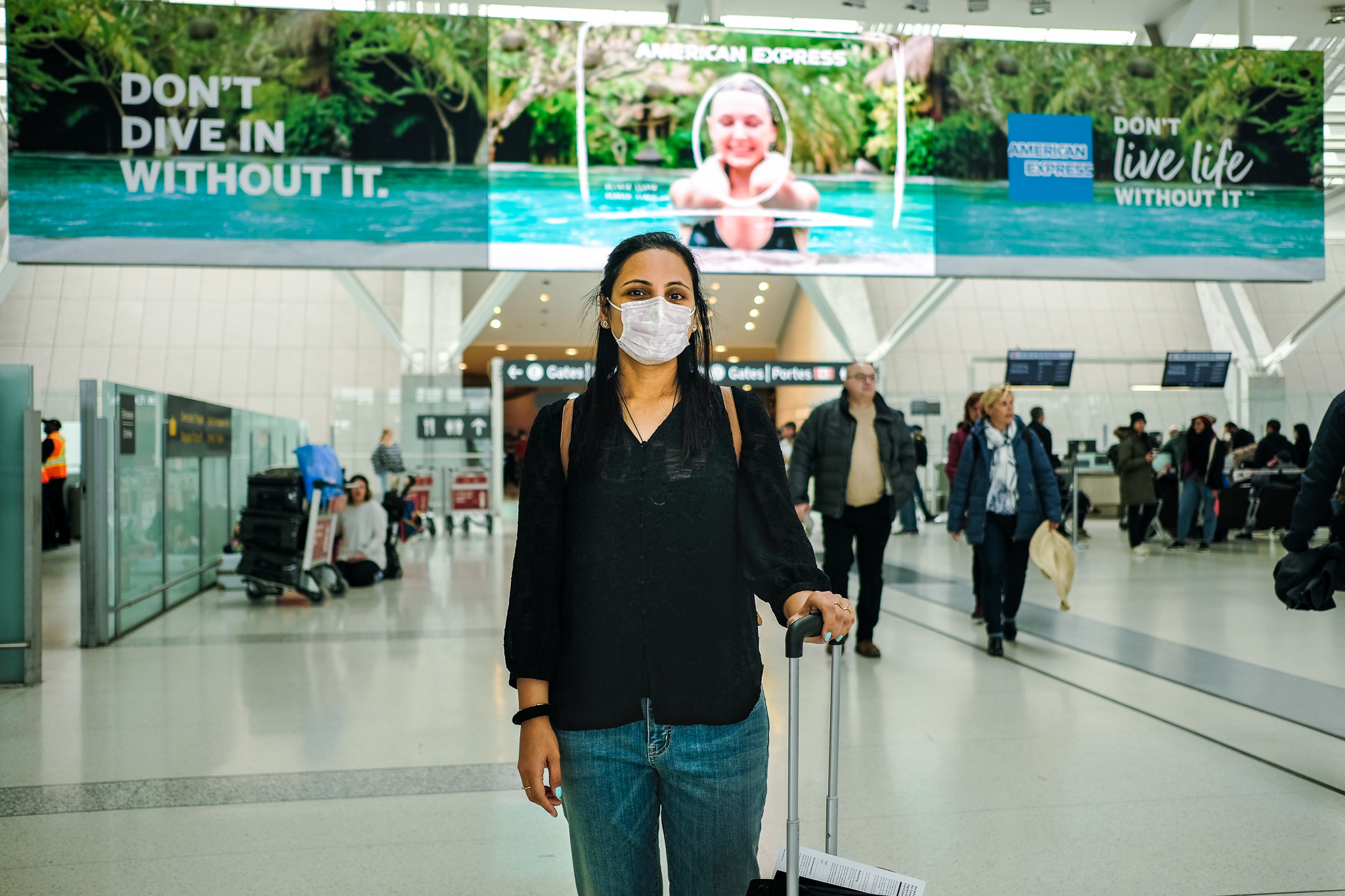 Where are you going? I’m flying to Vancouver for four days to see some family, then going to New Zealand.

Are you worried about the virus? Obviously. I don’t wanna stay in Vancouver for four days, I just want to go home. I’m sort of concerned that I could be stuck in Toronto.

What did your parents and friends say? My family is concerned, but there’s nothing they can do about it. I can’t just stay here, though. I need to get home and self-isolate for 14 days. My husband is there looking after the bar. 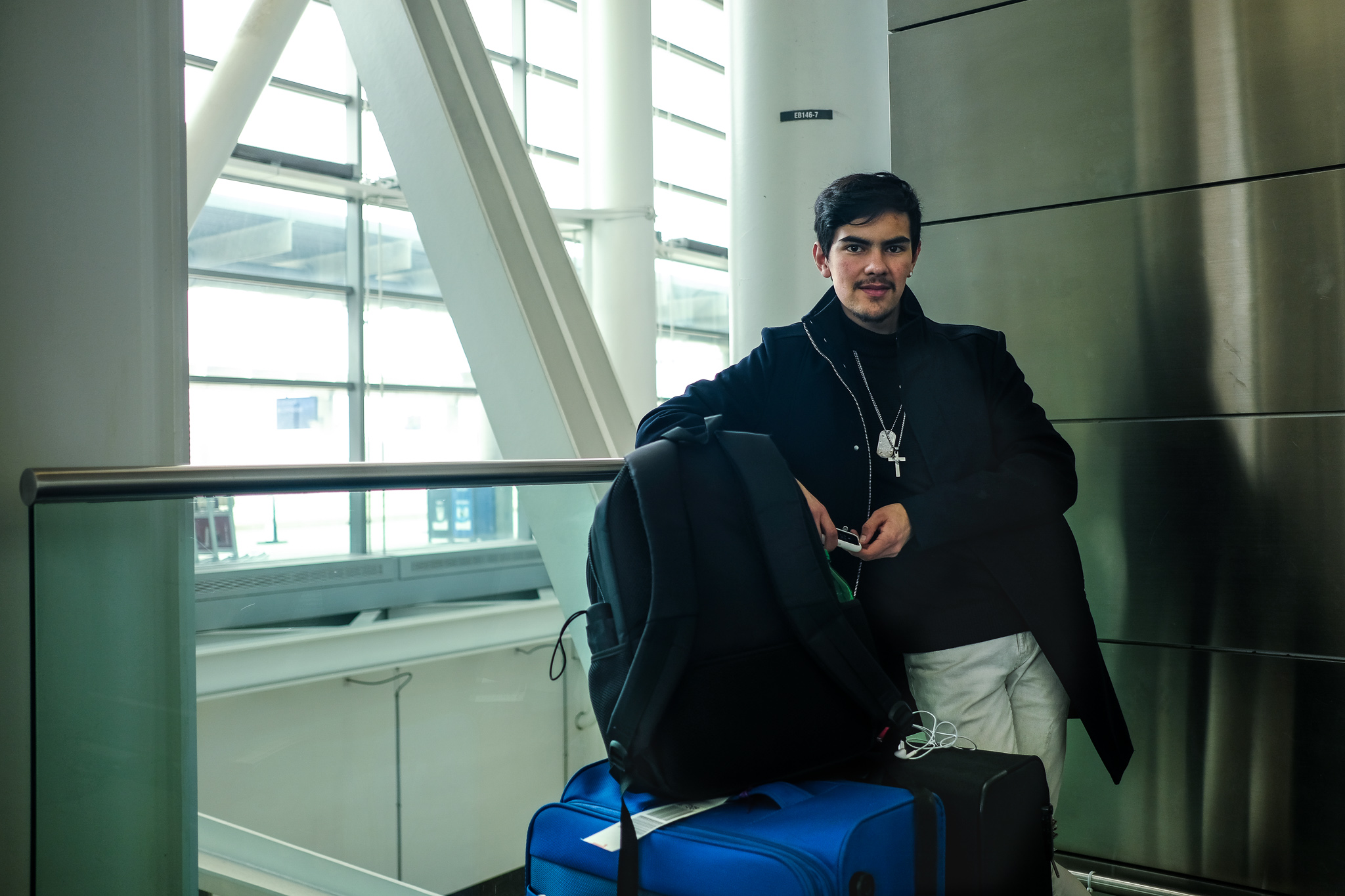 Where are you going? I’m flying back to Colombia. I’ve been here studying.

Are you worried about being stranded abroad? I’m not worried. I know I’m going to get home.

What did your parents and friends say? My family feels okay, they aren’t worried.

How much hand sanitizer are you bringing? I don’t have any sanitizer or other protection. 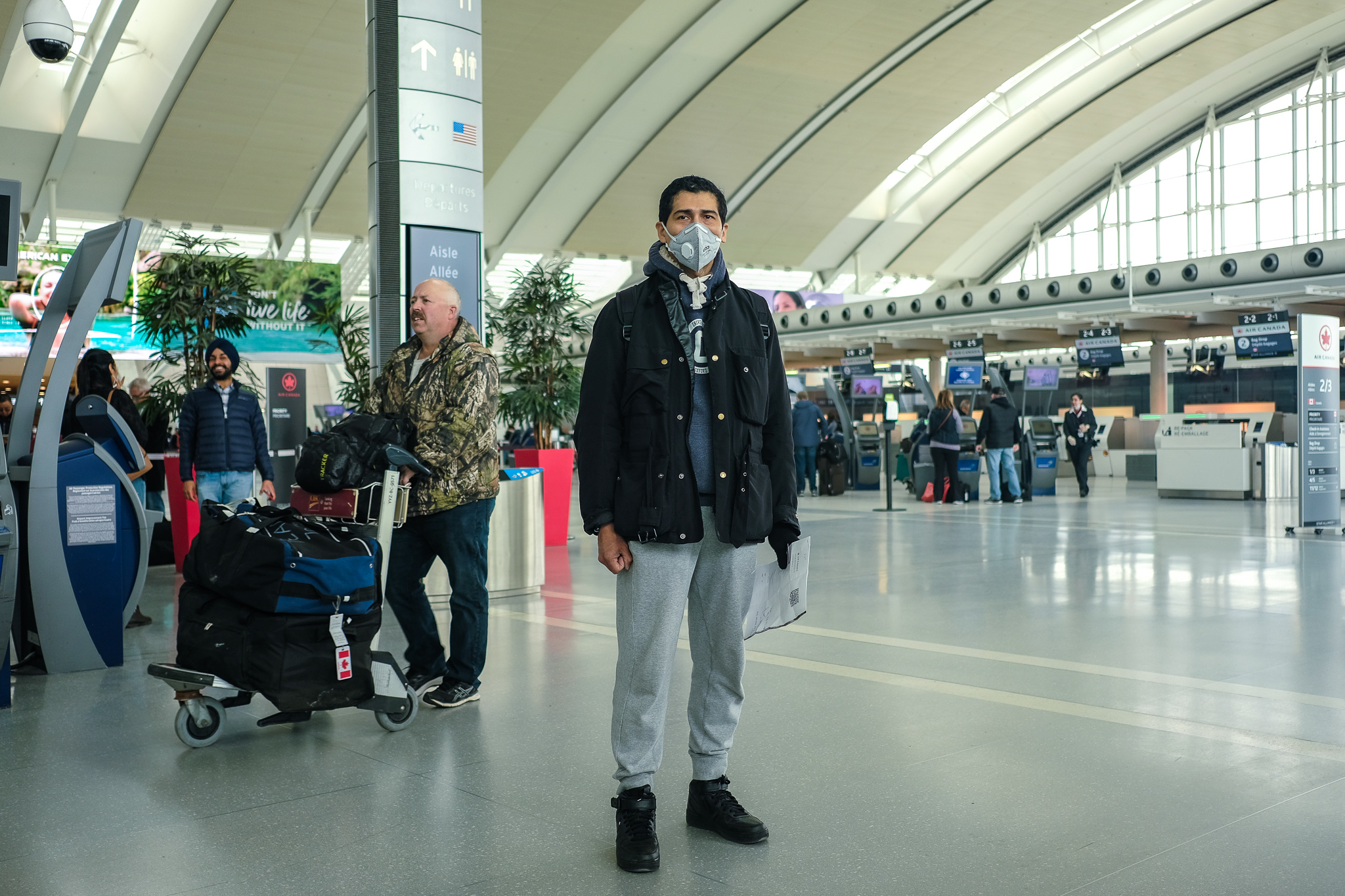 Where are you going? Back to Spain. I’ve been studying English here for three months.

Did you get a ticket discount? We got our tickets about three weeks ago. I don’t really want a discount, I just want to fly. That would be enough. 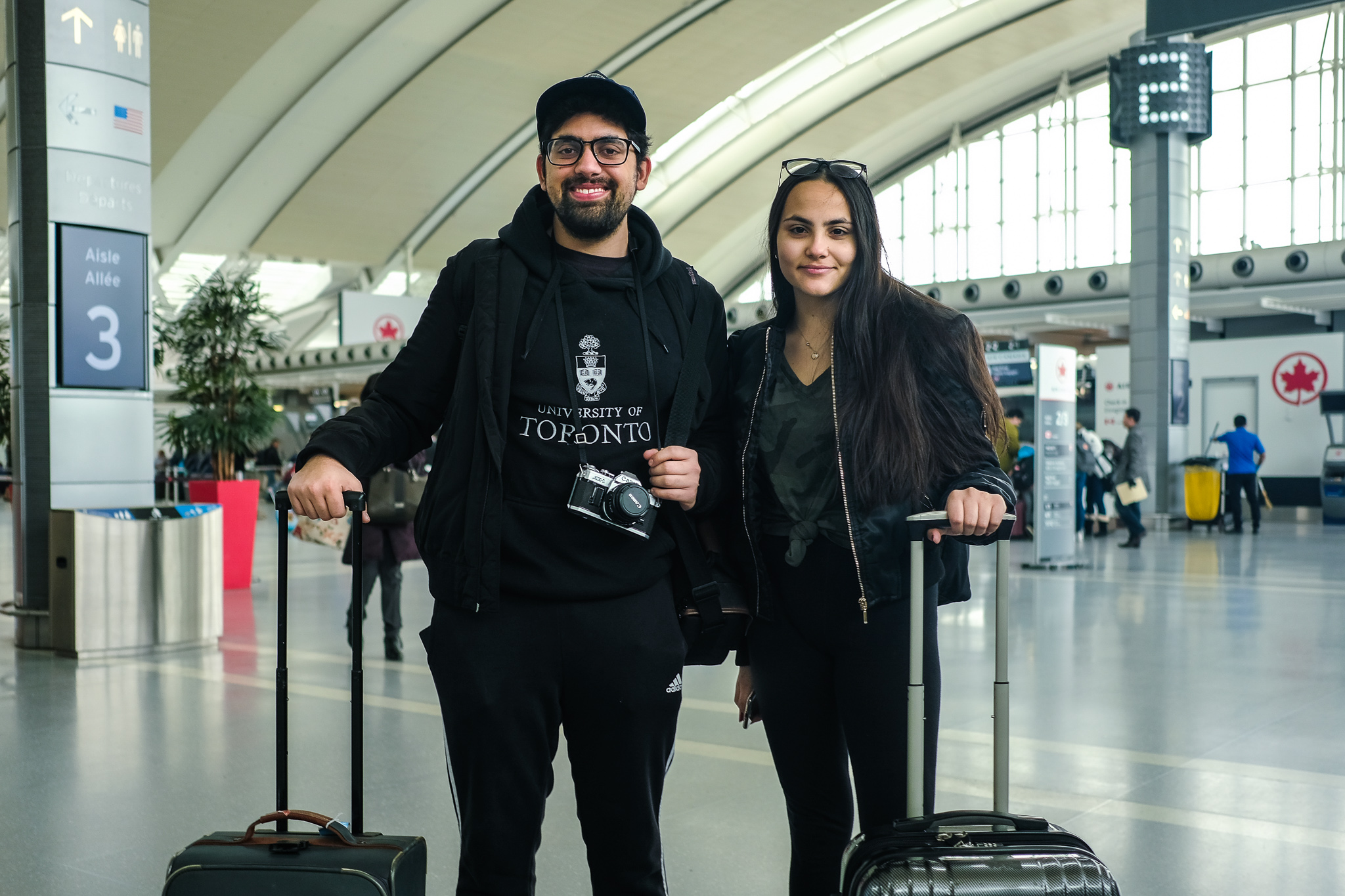 Where are you going? Sharan: We’re flying to Dubai to visit our families and come back.

Are you worried about the virus? Insha: I’m worried that they’ll close the borders. Sharan: Pretty much a matter of time until they start closing them. I’m not super concerned with catching it because if I do, I’m not in a risk category.

Are you worried about being stranded abroad? Sharan: I’m more worried about school. Finals are coming up and we’re not sure if we should come back to Toronto. If I get stuck in Dubai, I don’t know how I’m going to do my finals, unless they’re online.

What did your parents and friends say? Sharan: My family wants me to come home more than anything. I told them I wanted to stay for finals, but they said they didn’t really care about school, they just wanted me back. Insha: They were worried that I might contract the virus on the flight, being stuck in the air for 13 hours. 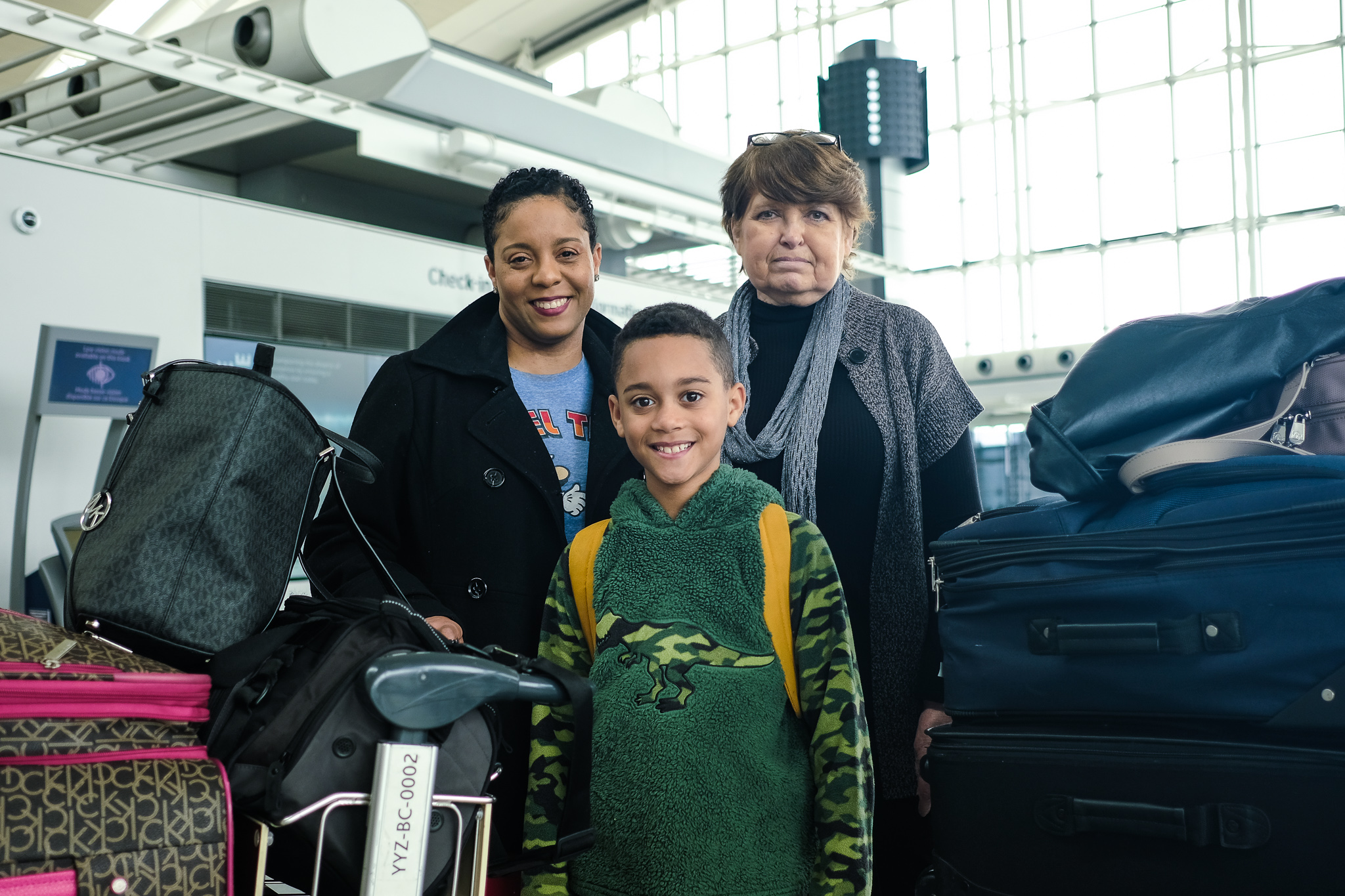 Where are you going? Gayle: Flying to Houston, then to San Antonio. We were in Toronto for spring break.

Did you get a ticket discount? Aletha: We booked far in advance, long before they started talking about all this stuff.

What did your parents and friends say? Gayle: I don’t think my family is too concerned about us being here because we all have a medical background, so we’ve been taking precautions. 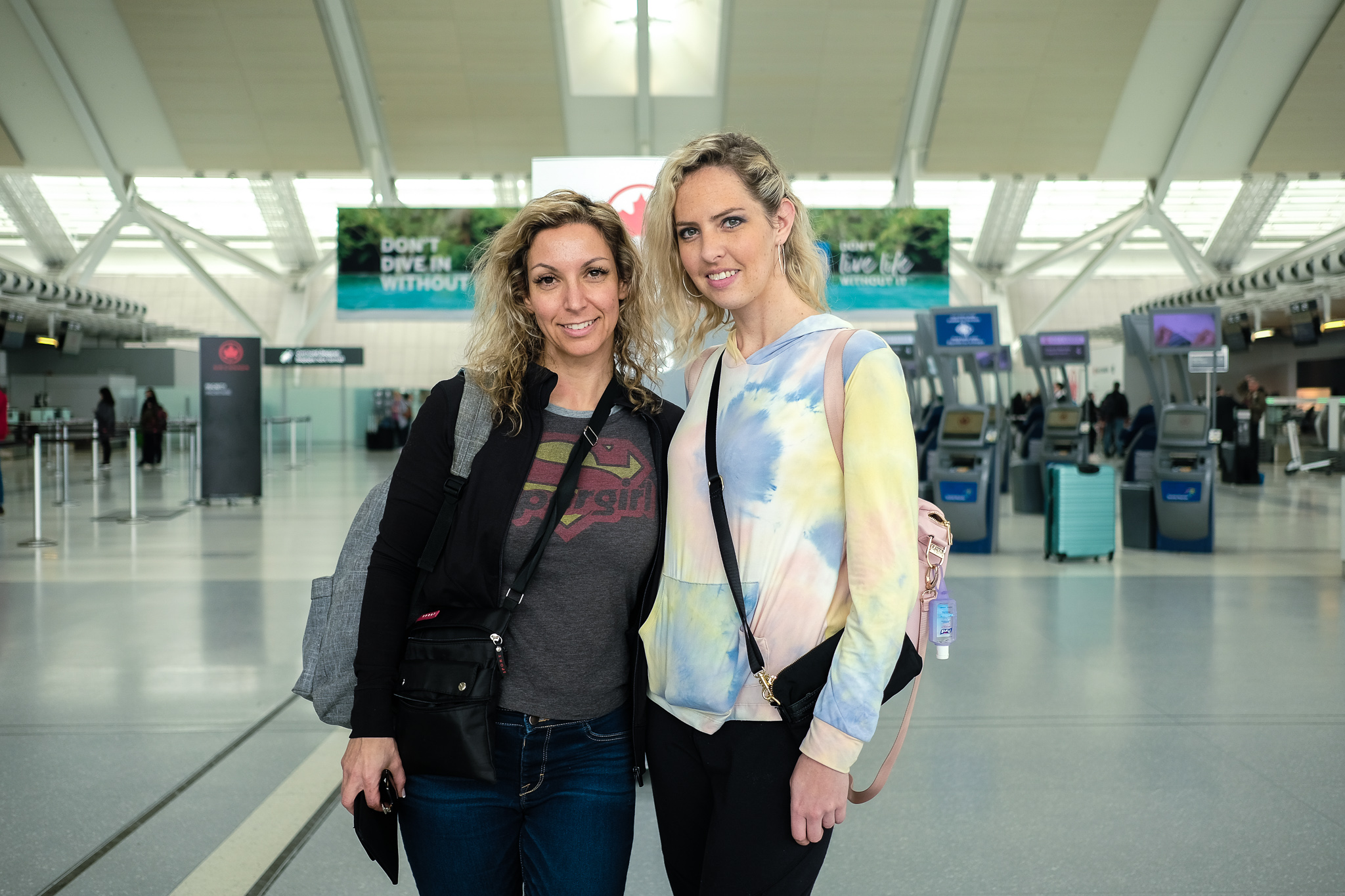 Where are you going? Vicky: We’re going to Cuba. We planned it about a month ago, so, unfortunately, no Covid-related discounts.

Are you worried about the virus? Vicky: Not scared. Aware? Yes. Jessica: We’re not oblivious.

What did your parents and friends say? Jessica: Our folks think we’re crazy. They’re terrified.

How much hand sanitizer are you bringing? Jessica: I’ve packed three little bottles. Vicky: And some Lysol wipes. Both: And some gloves.