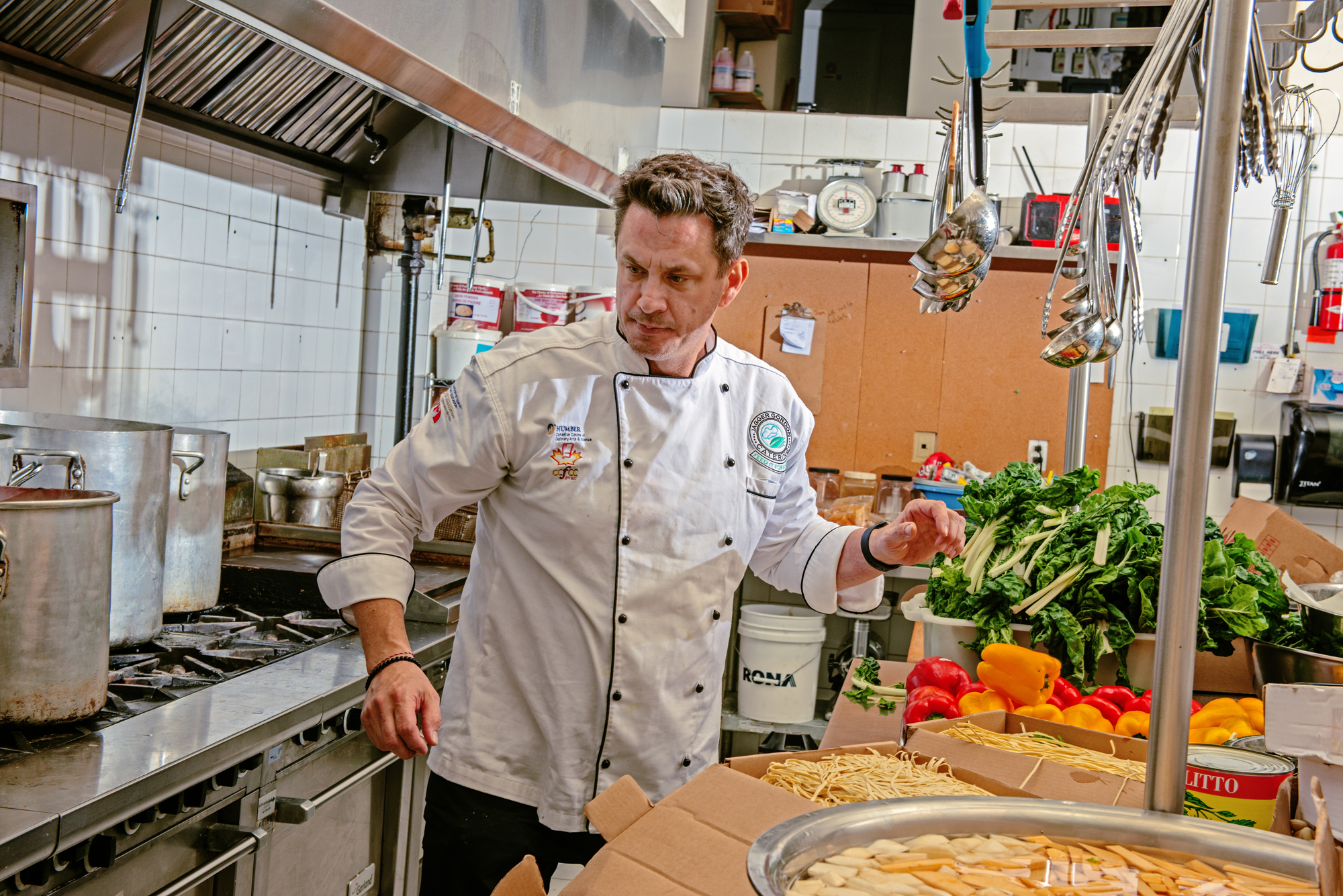 I’m primarily a caterer, but in 2014, I started Feed It Forward, a non-profit that feeds people food that would otherwise go to waste. As part of that, I run a pay-what-you-can grocery store and coffee shop on Dundas West in the Junction, a social enterprise funded from the profits of my catering company. Now, during the coronavirus crisis, my team and I are trying to do what we do on a much bigger scale. Essentially, we’re creating an emergency meal backup: we’re going to make meals for seniors and low-income people using food we’ve received from partners, some for free and some at a wholesale rate. The plan is to make 30,000 meals—that’s as many as I can fund out of pocket. Last night, we handed out meals in Nathan Phillips Square to a lineup of hungry people.

To make this work, we need to get the food and make the meals, then freeze them so they keep until delivery. Next, we need to coordinate who needs the food, when and where. And finally, we need people to help us take it to them. We’ve asked restaurants that have excess stock from the shutdown to donate it so we can turn it into meals for vulnerable people.  So far, we’ve received food from the CN Tower, the Food Terminal and the Ritz Carlton and Harbour Castle hotels. Impact Kitchen and Tractor provided produce, Oyster Boy gave us 2,000 oysters and Barque on Roncesvalles donated beef and pork. Osmow’s Shawarma gave us 1,000 pounds of chicken, and so did Reuven International. We have two truckloads of food coming in from Sysco. I’m cooking with all my best stuff, prime rib and filet mignon and organic vegan burgers. We’re using house-made pasta. We’re set up in the kitchen at the Mississauga Grand Banquet and Event Centre. The venue is closed, so they’re letting us use it. My four chefs are in face masks washing tomatoes right now. If any chefs have extra stock, bag it, tag it, freeze it, and we’ll come pick it up. We’ll also take the help and kitchens of any chefs who are willing to cook.

Our volunteers are picking up donations from all across the city and bringing them to the Mississauga centre or diverting them to a warehouse we’re using for storage. We’re short on freezer space right now. Souvlaki Hut in Bloor West Village is letting us use their freezer facilities in addition to what we have in Mississauga, but we still need 1,000 more square feet to store what we have coming. Earlier this week, we were using one of our trucks to keep the meals we’d made frozen, but now that it’s warming up we can’t do that anymore.

We’re preparing food now because we anticipate the food insecurity in this crisis will only get worse from here. Lower-income families might finish the groceries they have in the fridge faster because the kids are home and they’re going through more food. If they’re not getting their next paycheques, what do they do? We’re getting hundreds of calls and emails a day from people who want these meals. Right now, we’re prioritizing people who are infected with the virus and quarantined as a result, as well as the elderly. We’ve started delivering the meals, and our volunteers are dropping food off on people’s porches in protective gear. We want to make sure people are staying home as much as they can. I’ve got 200 pots, from my catering business and the classes I teach at Humber College, ready to be distributed to home cooks who want to make meals and share them with neighbours in need. We also want people to know that some food can be processed into pet food, too, because hungry people are going to have hungry pets. Our hope is that community leaders will help with distribution. Arif Virani, the MP for Parkdale–High Park, and his team are helping in Parkdale, and we need other politicians and organizers to get in touch so we can put a distribution team together.

I’ve lost all my catering business, so I can’t fund more than 30,000 meals on my own. That’s not even enough to feed a street’s worth of people for a week. I was raised by a single mom, and our cupboards were often empty, so I learned the importance of food early on. Food is a right, not a privilege. As long as we have donations coming in, we’ll be preparing meals for people. We’ll do it until the end, until this is all over.