Inside Death in Venice’s new gelato laboratory in Little Portugal

Inside Death in Venice’s new gelato laboratory in Little Portugal

Eggplant tahini, crickets, black garlic and toasted fennel: none of these are your run-of-the mill gelato flavours—but Death in Venice isn’t your run-of-the-mill gelateria. Mad scientist Kaya Ogruce has been experimenting with funky flavour combos for years out of a shared space on Queen West. Now, a few blocks north, Ogruce finally has a space to call his own. Well, kind of—Ogruce has invited Parisian pastry chef Hadrien Verrier to handle the café’s baked goods, while he toils away in his gelato laboratory.

The lab is a glassed-in box at the back of the shop. It was important to Ogruce that his gelato-making process be as transparent as possible. He wants people to see that he’s using real Niagara fruit, which he freezes in batches when it’s at peak ripeness. He also wants to educate people about gelato and proselytize its virtues. “I’m on a mission to make sure people know the difference between gelato and ice cream,” he says.

There’s a wall lined with edible (CXBO and David Chow chocolates, as well as sourdough loaves, granola and cookies made by Verrier) and non-edible goodies (Death in Venice swag and ceramics): 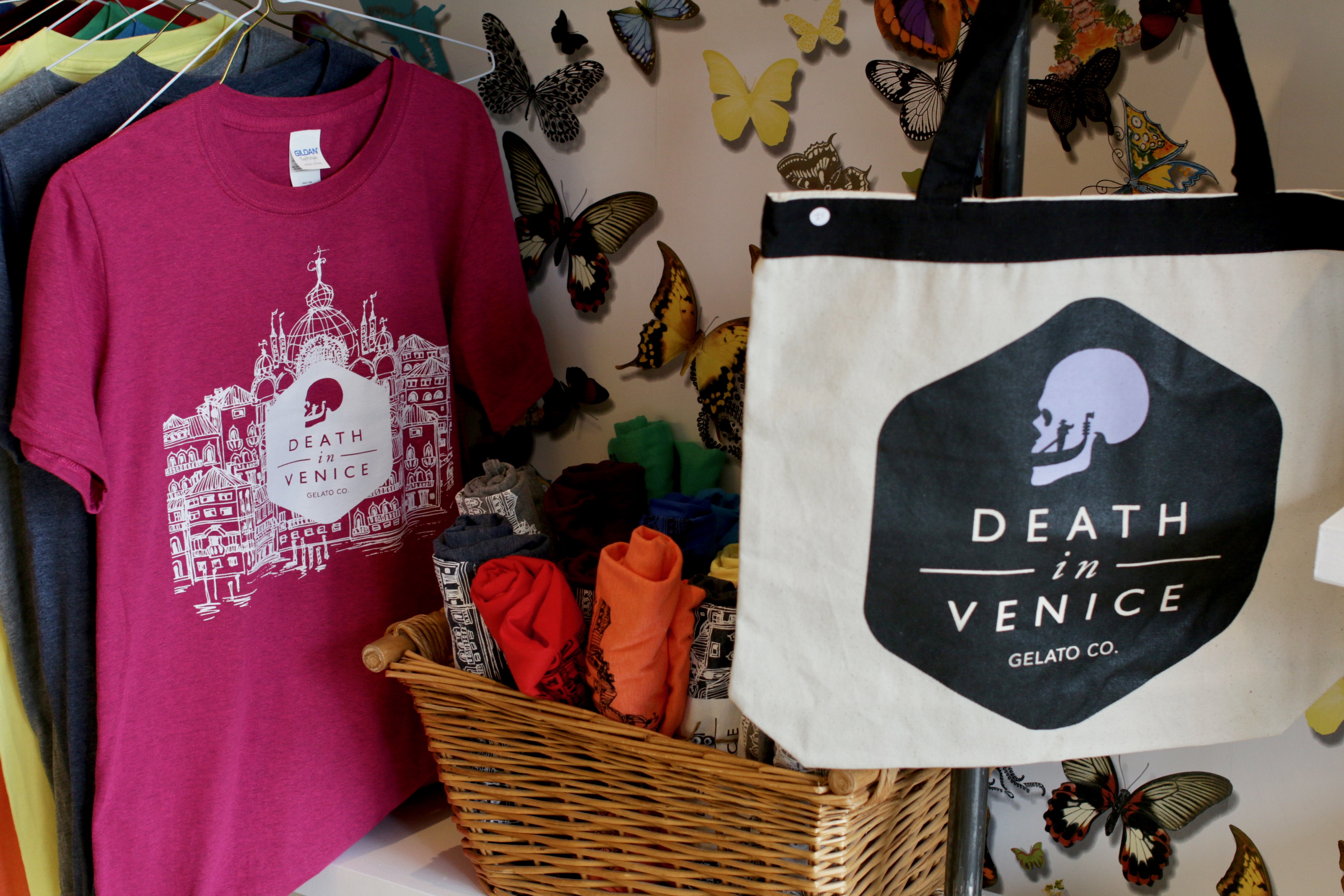 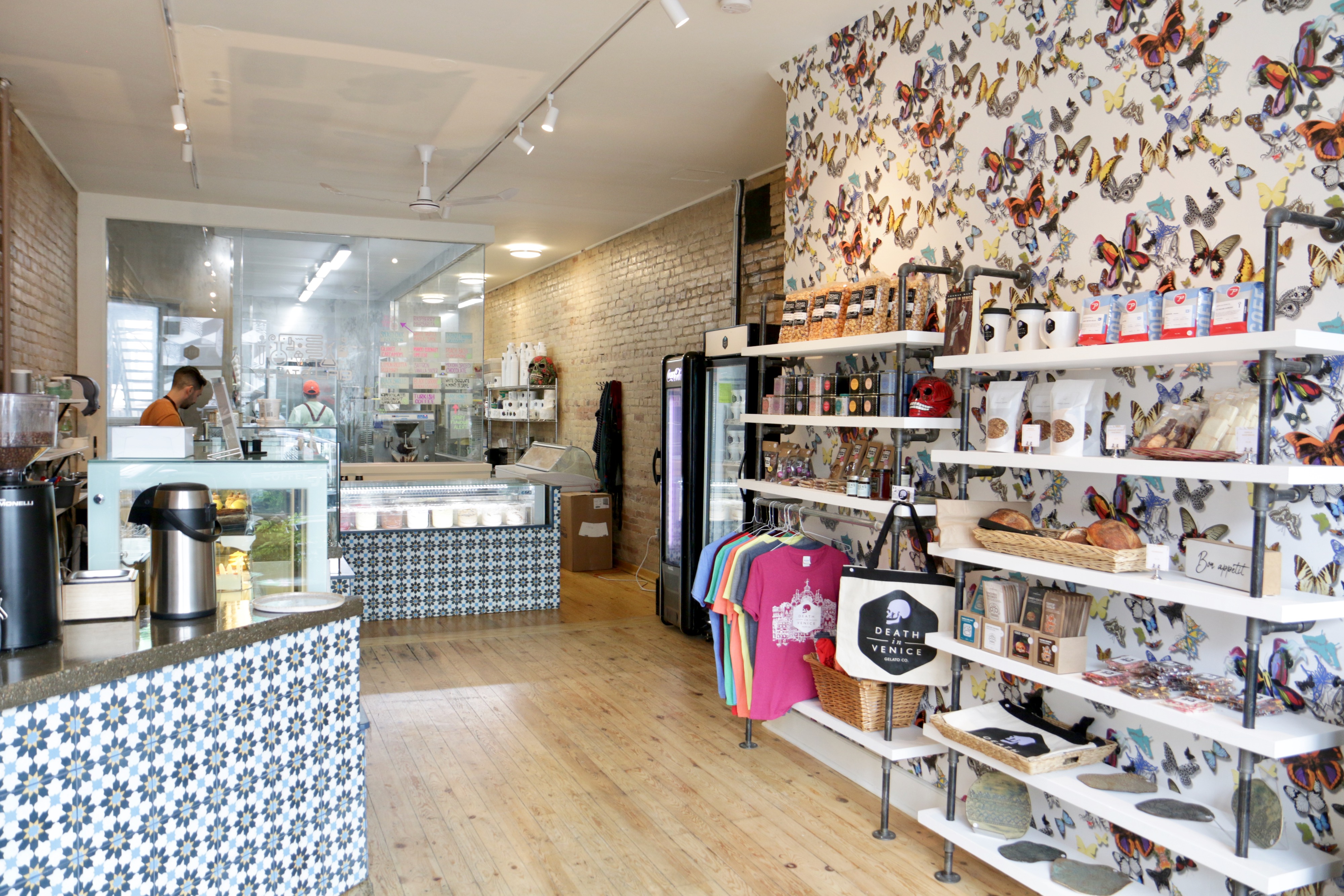 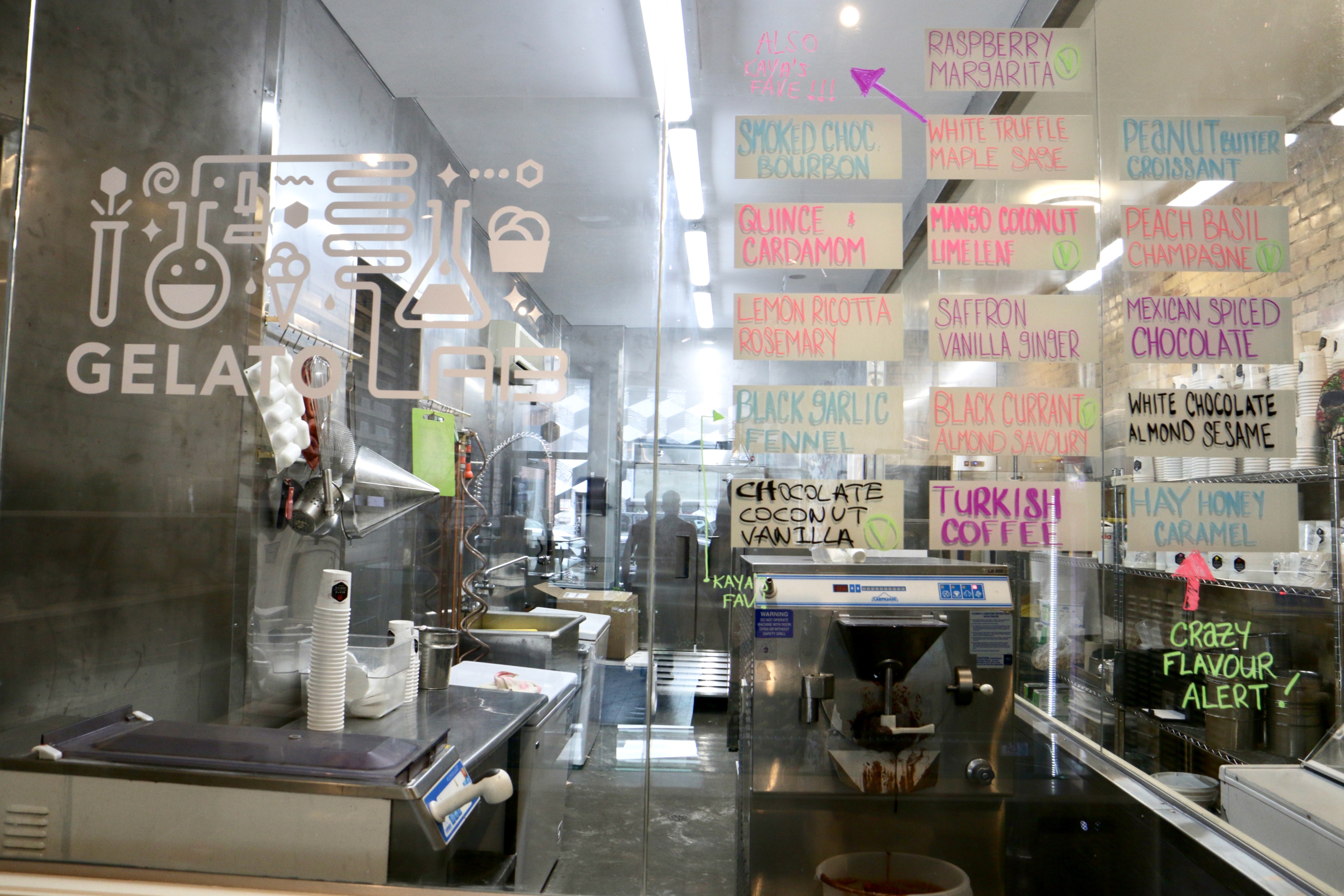 Ogruce, at work in his lab: 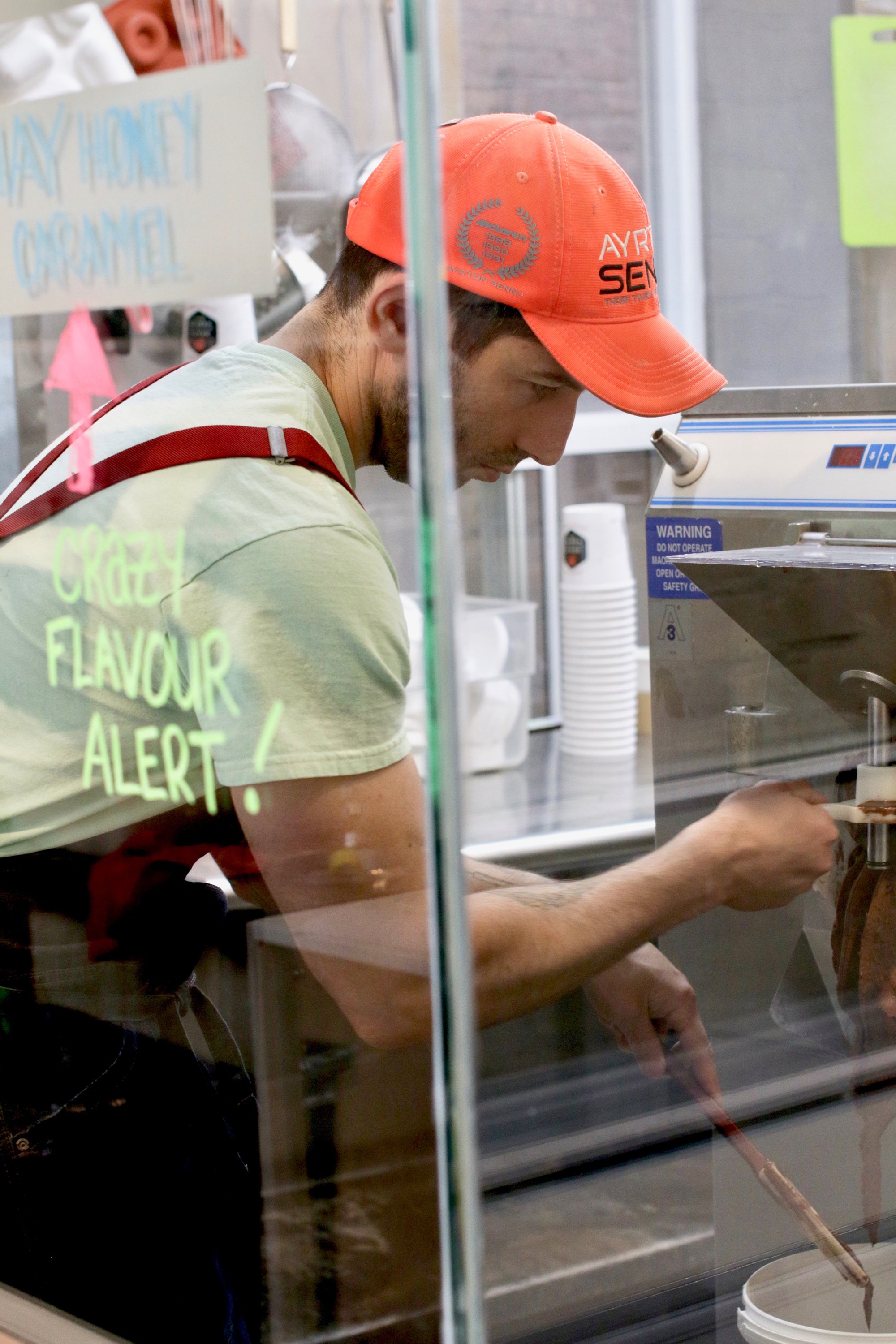 And filling up a pint: 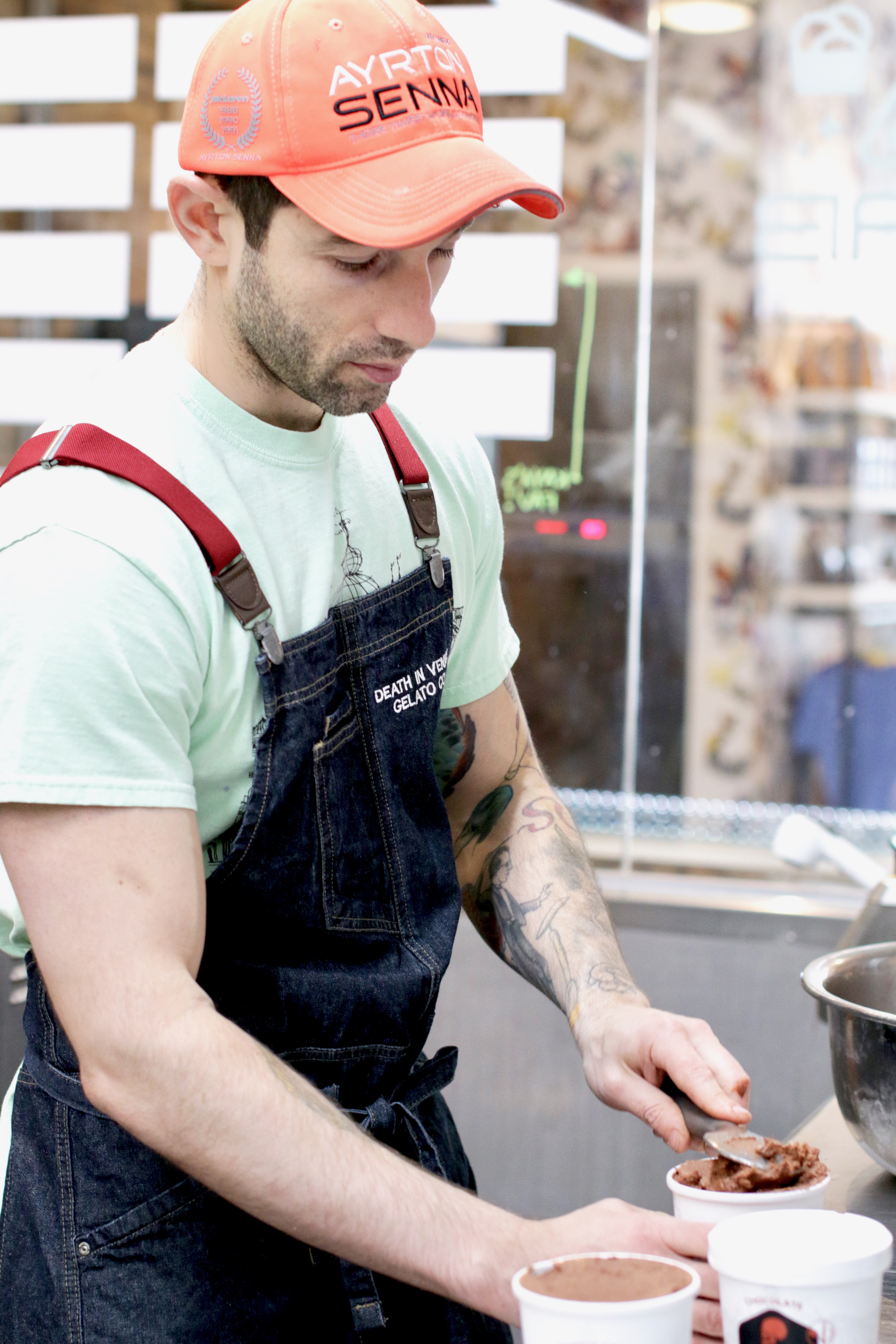 Here are some of Hadrien Verrier’s viennoiserie. There are, of course, all the classics (pain au chocolate, butter and almond croissants, and chocolate Danishes) as well as some seasonal options. The pink-striped flaky treat, for instance, is filled with rhubarb: 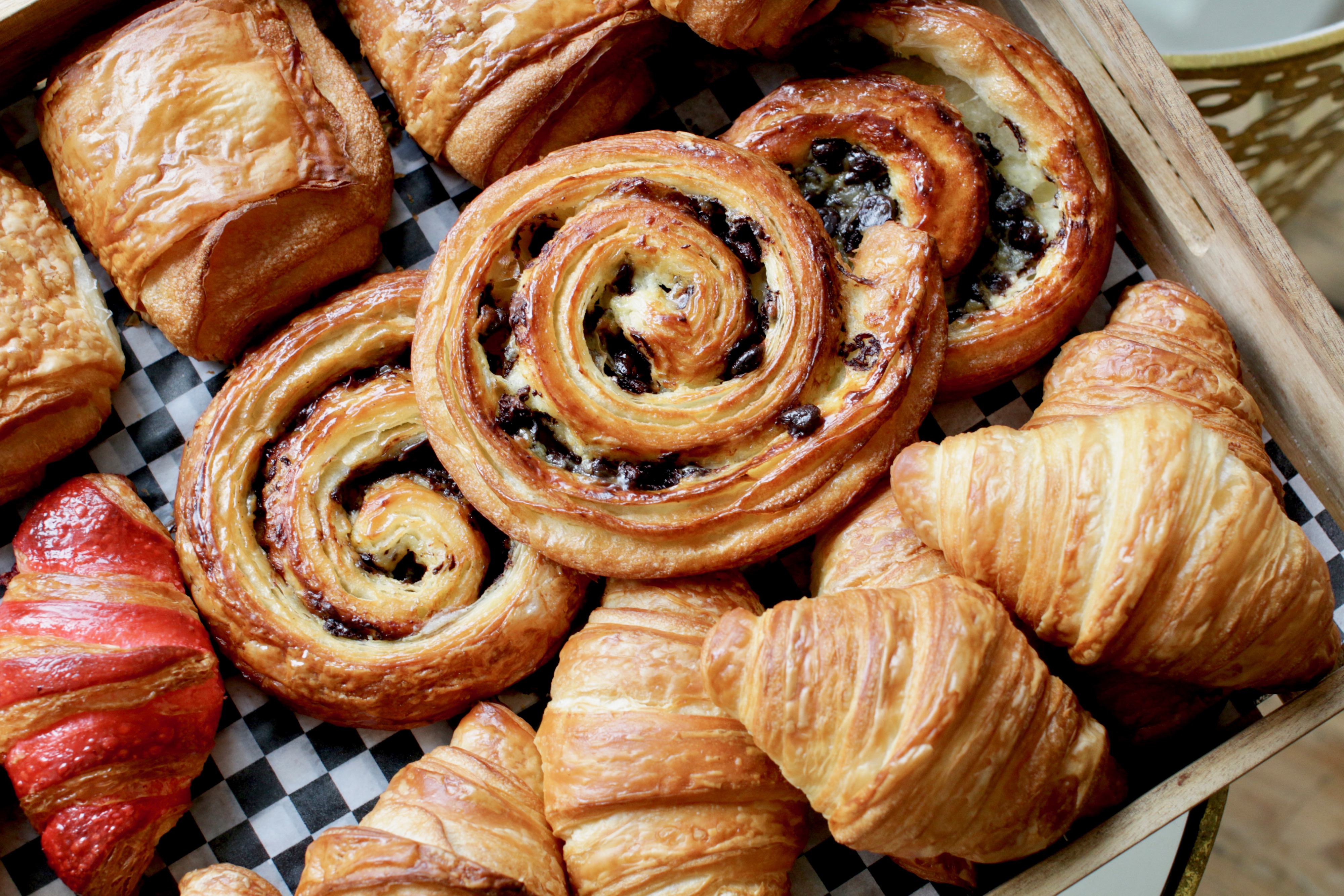 Here are a few of Verrier’s single-serving tarts. Clockwise, starting in the foreground, there is a lemon, ricotta and rhubarb tart ($8.25), a yuzu sponge cake topped with lemon curd ($8.25) and an opera cake ($8.25): 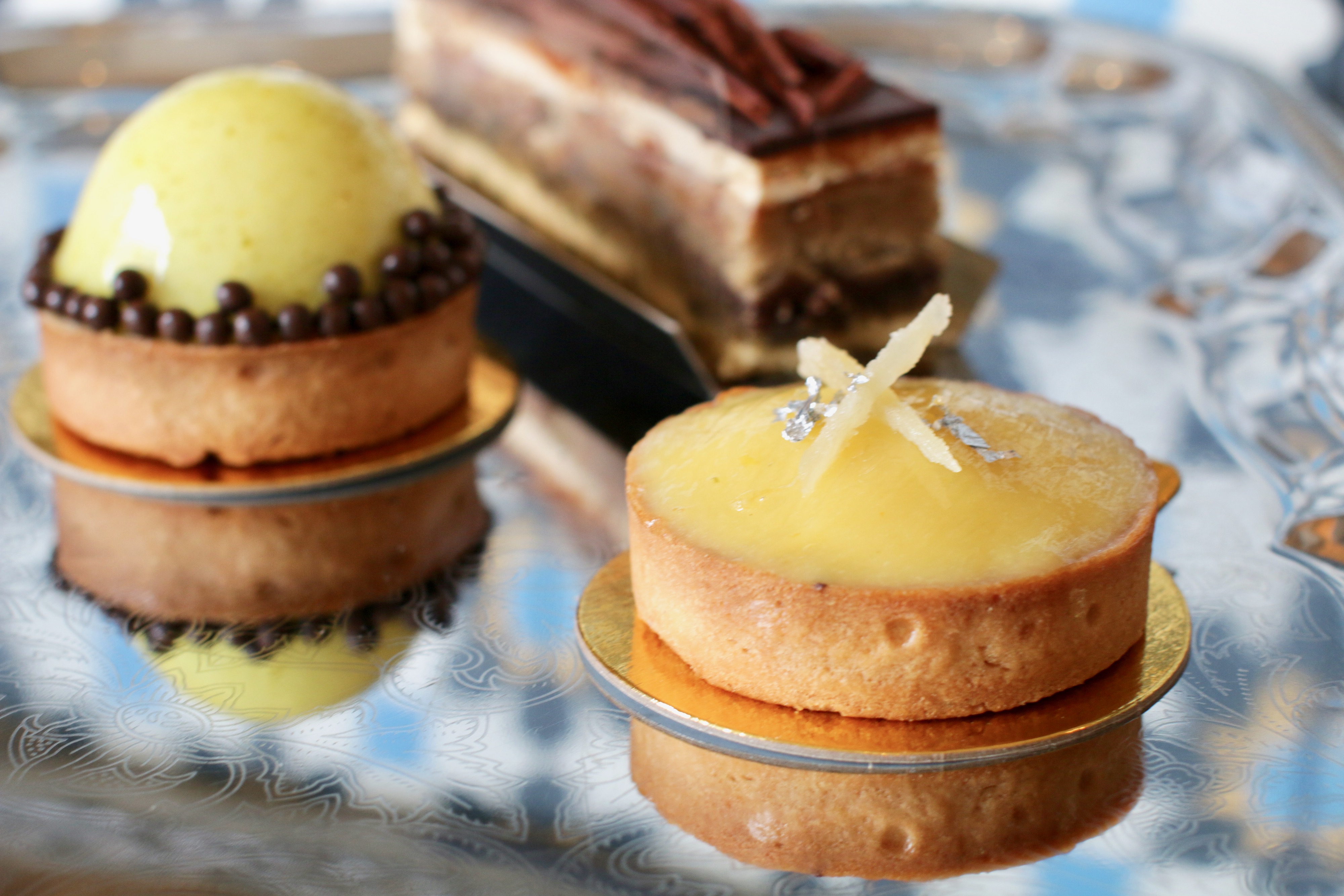 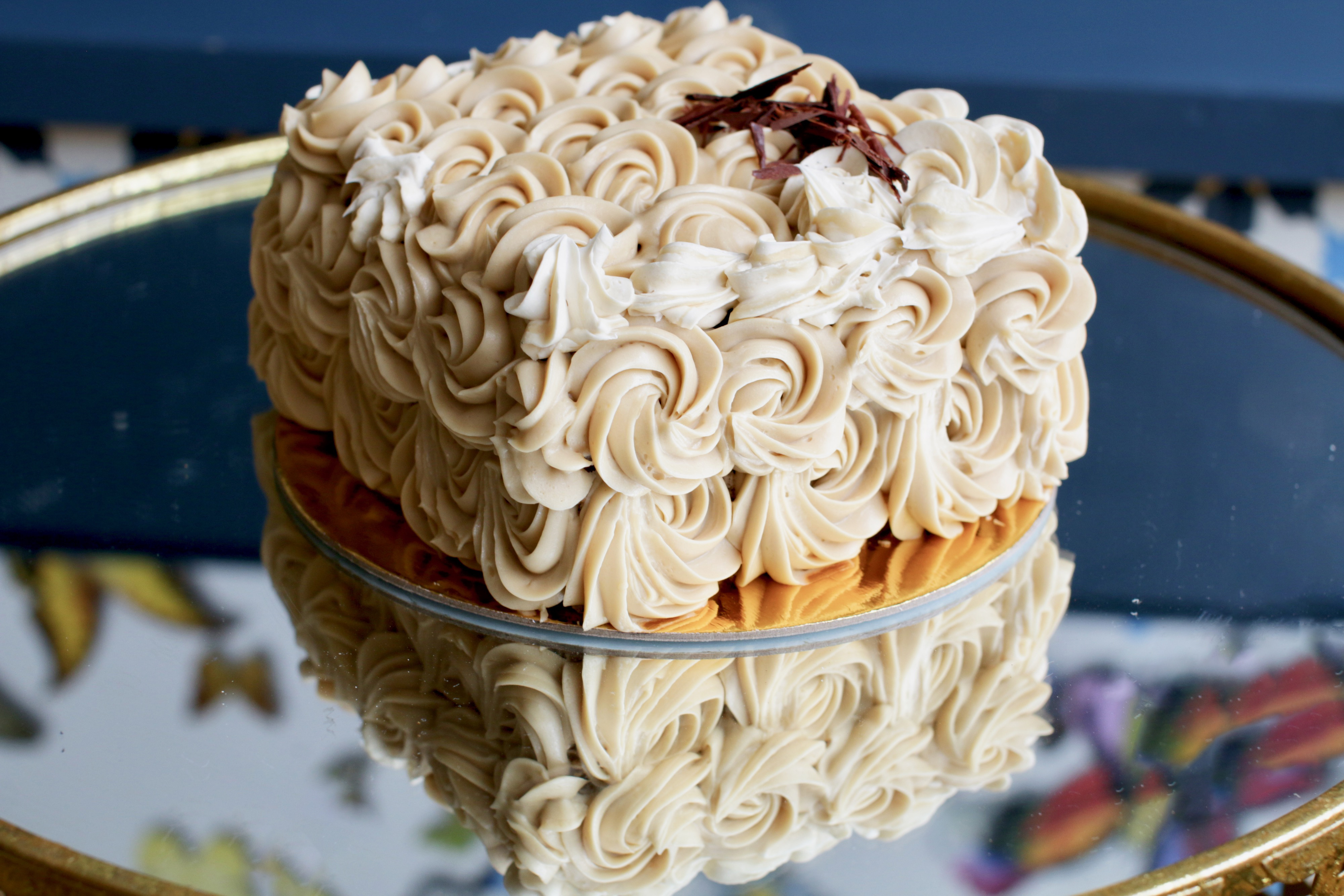 Here are the caramel bread puddings ($3.25). Some savvy folks have been ordering these with an accompanying scoop of gelato: 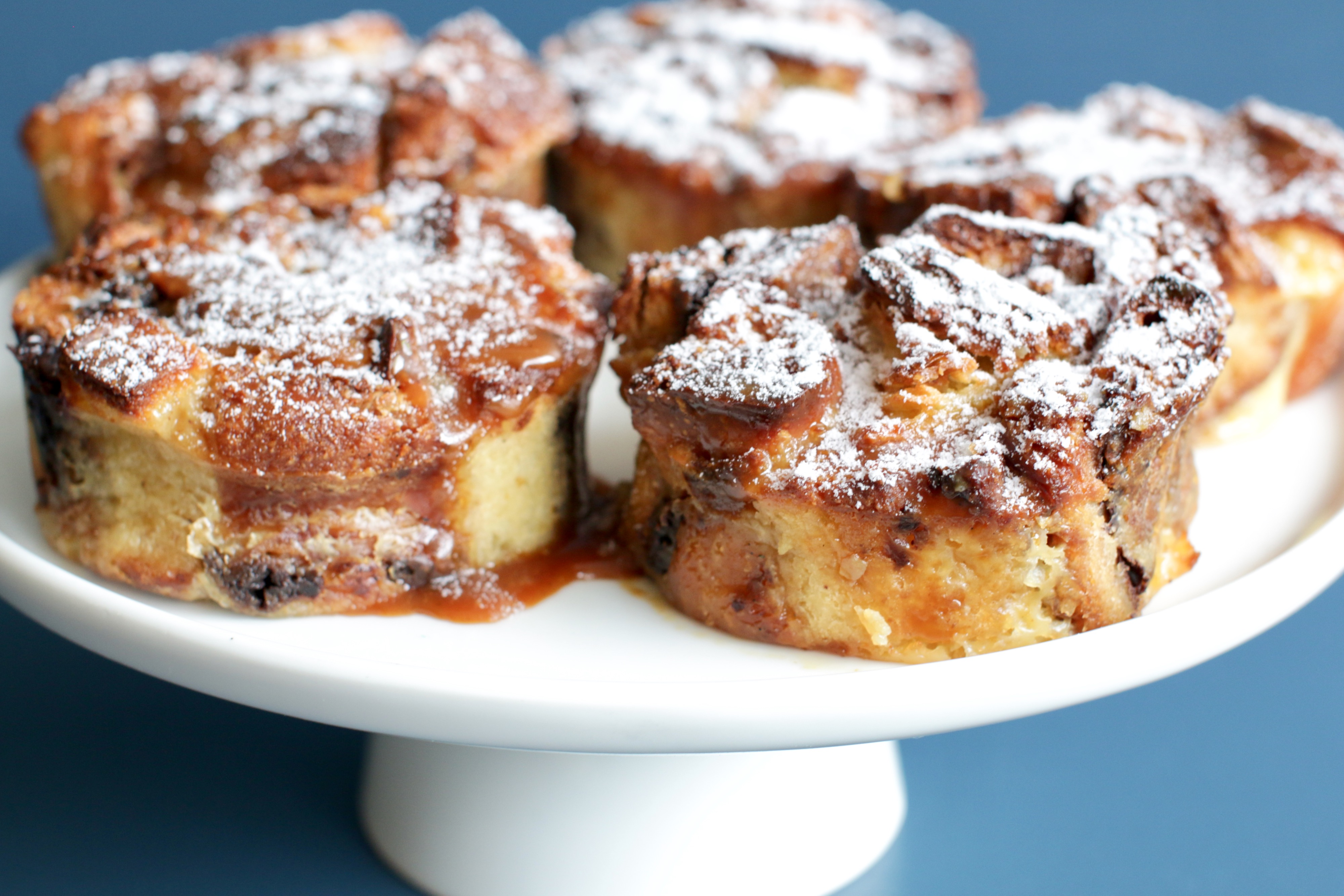 They also make affogato ($7.50) with your choice of gelato: 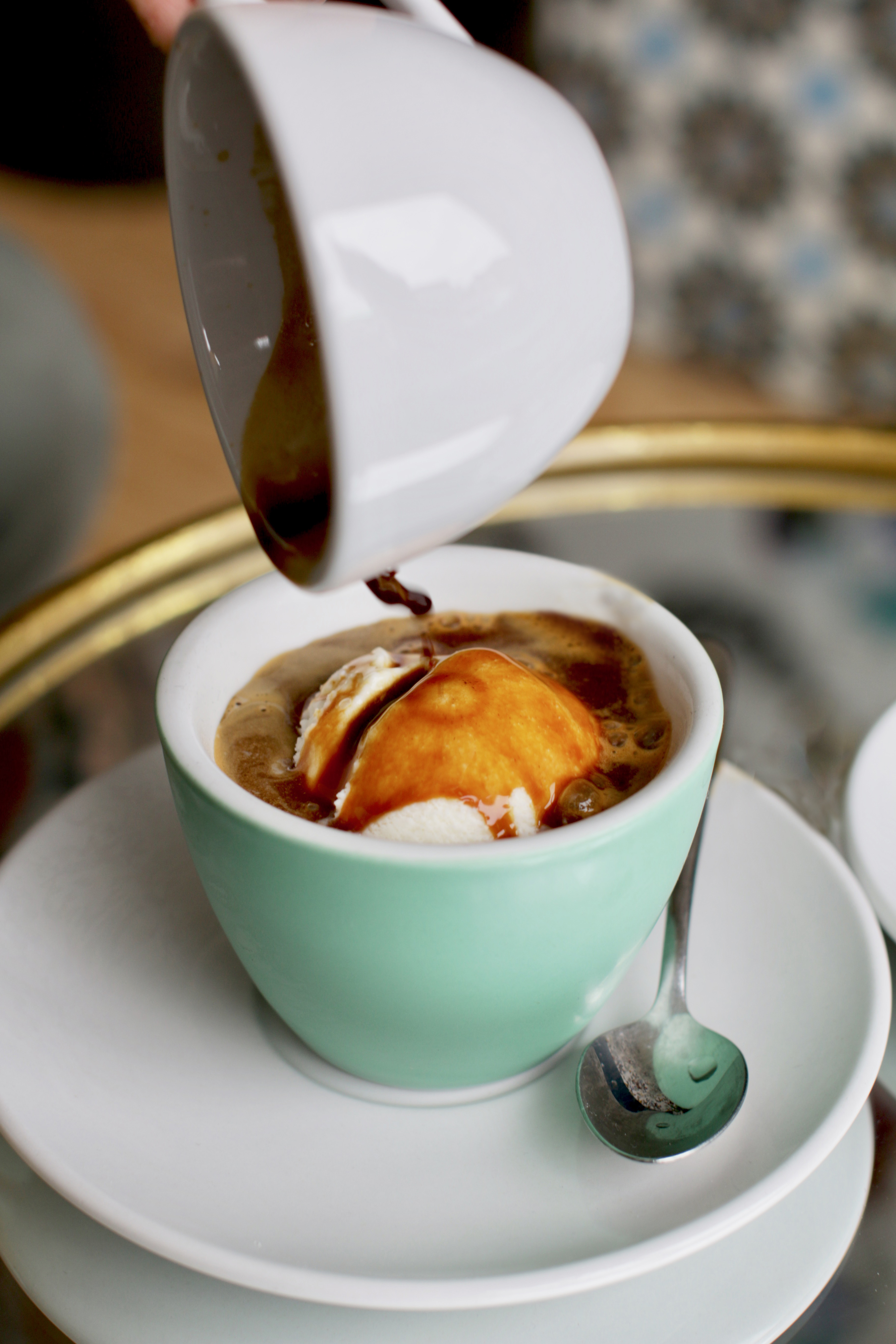 For those who wish to have gelato but not a cone, they can have it one of these ceramic cones made by Ogruce’s partner, Maddalena Fuller. $4.50 for a single scoop: 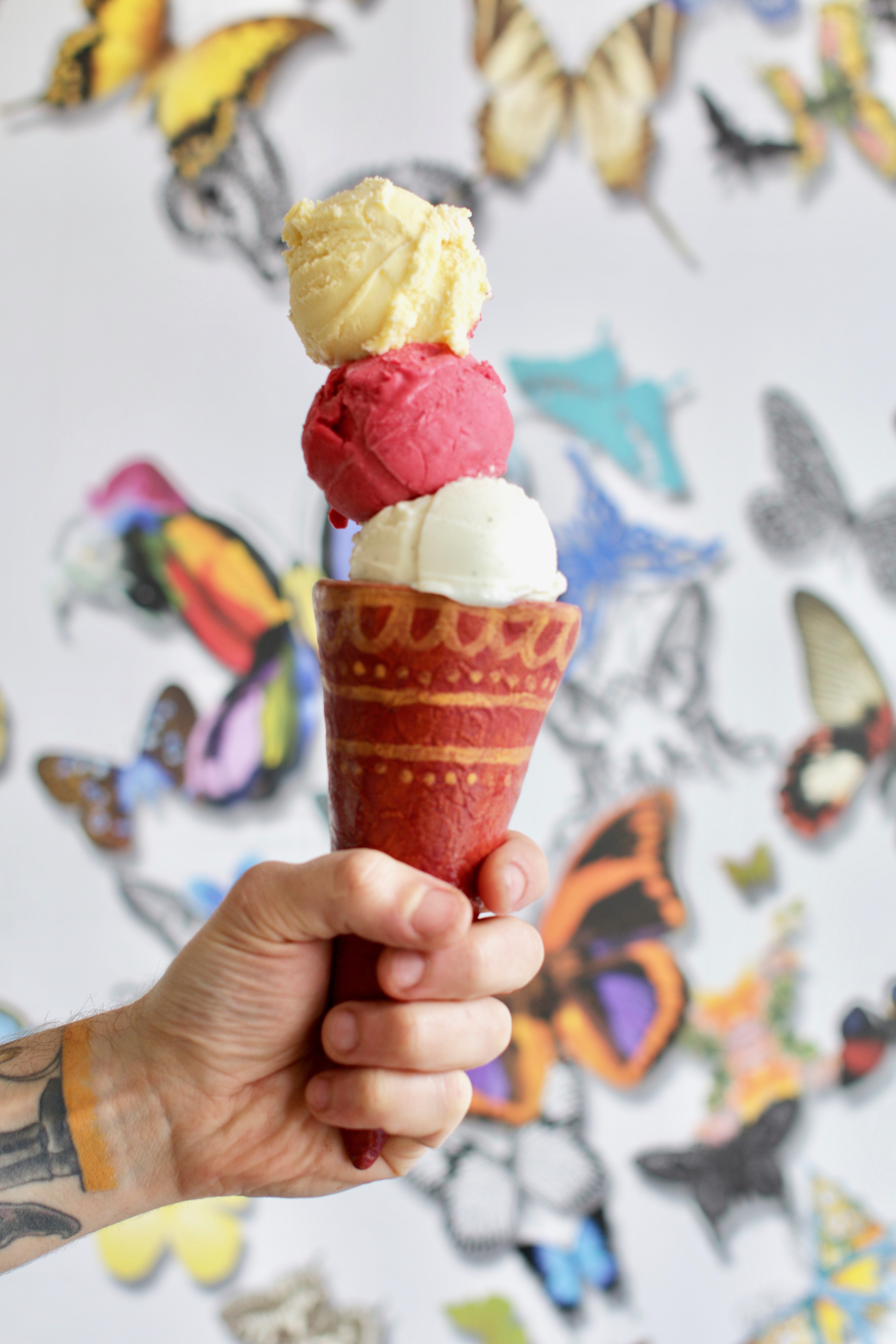 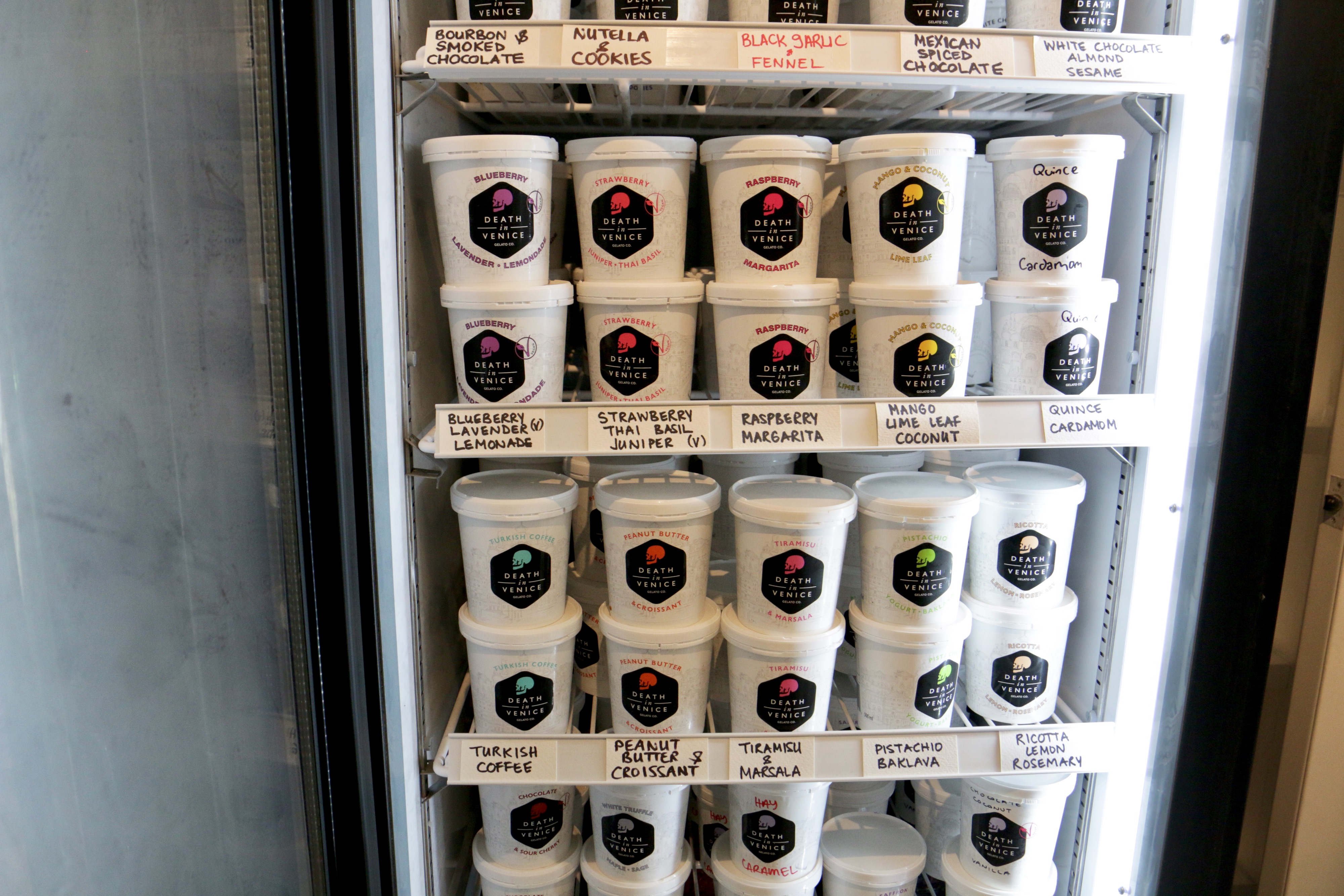 And here’s where you can find the lab: 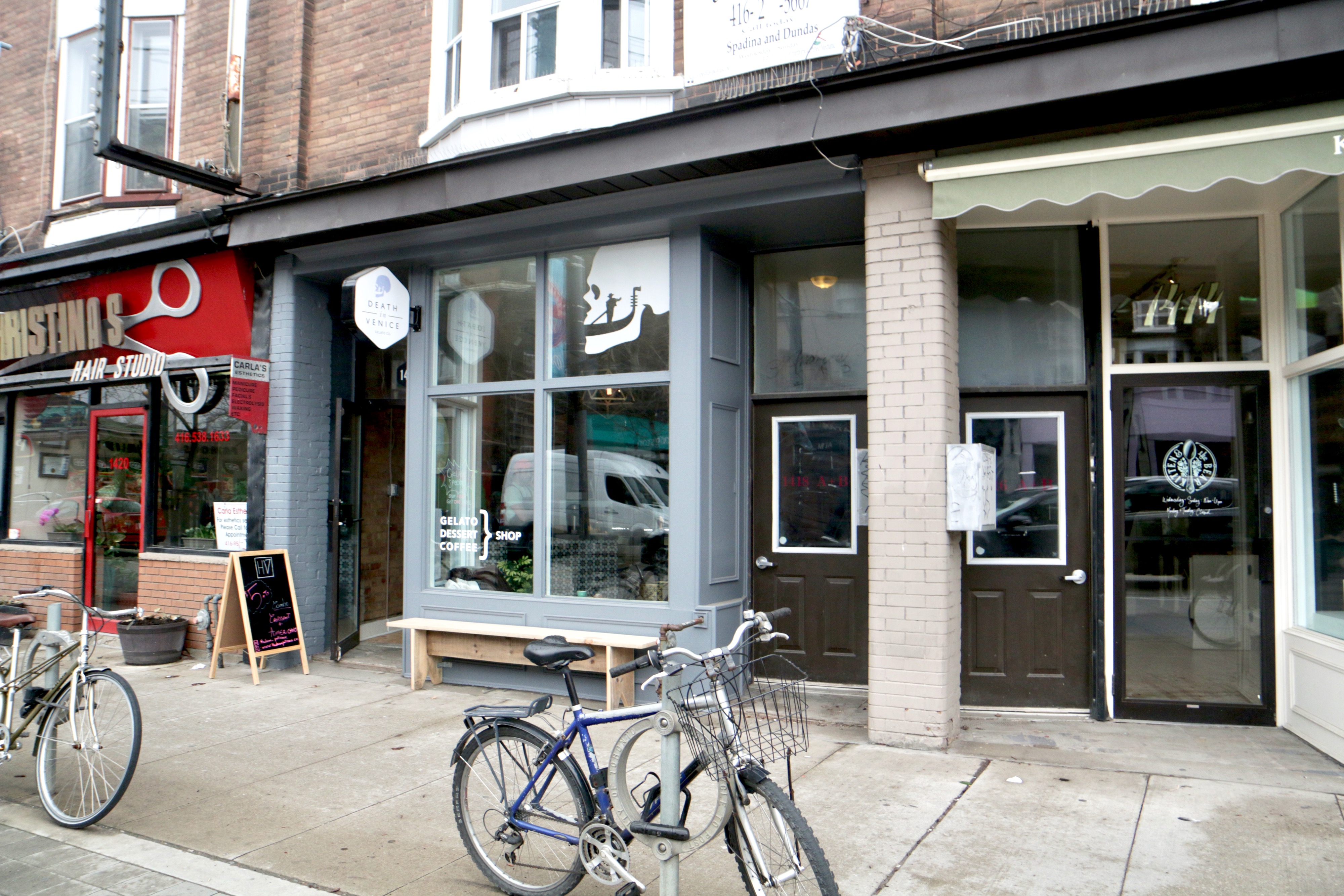 Accessibility: No barrier at entrance; washroom in the basement.