Our Review of Doomie's Toronto

Greasy, spicy, saucy and cheesy not-good-for-you grub that’s entirely vegan: fries, burgers, tacos, hot dogs—not a single salad. The restaurant has one other location in L.A., and Doomie (who isn’t a vegan) says it all started when he grew tired of eating at terrible vegan places with his vegan friends. “There were just so many things that were wrong with everything, and it bothered me to the point where I was like, ‘One day, I’m gonna do that right,'” he says. “The goal is to make everything good enough, not just for vegans, but for the people they drag out.” The Staycation (left) made with coconut rum, blue curaçao, pineapple juice and lime ($9) and the Cucumber Cooler made with gin, fresh cucumber, elderflower liqueur, lime juice, simple syrup and soda ($11). There are boozy shakes, too. This one’s the Oreo Kahlua Vodka. $12. ($8 without the booze)

Designed by Toronto’s Lisa Ho (The Addisons, Omaw), the space is a lot darker and more industrial than the typical vegan joint. Other fun features: something called a “vegan selfie room” decorated in comic strips by Vegan Sidekick and a Street Fighter 4 arcade game that’s free to play. 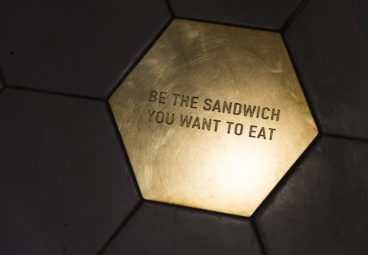 Here’s that selfie room (it’s also where the washrooms are). Bottle shop bars are booming, and we’re here for it

And it’s right next door

They’ve got both lunch and dessert covered