Where to eat burgers, tacos and barbecue right now 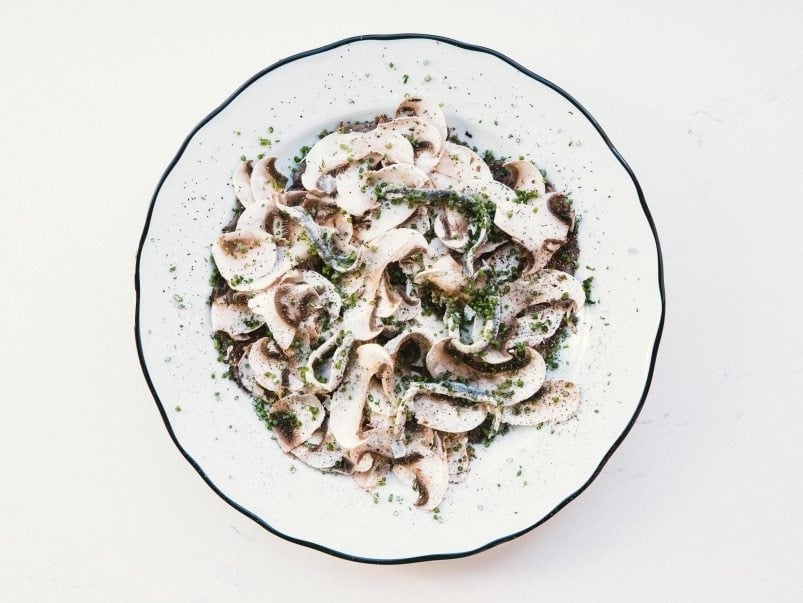 When Victor Barry opened a casual pizza place where Splendido was, his fan base was aghast. Where before there were heavy linens, candles and stately mirrors reflecting your quiet wealth back at you, now there’s a jarring, Tim Burton meets Nancy Reagan ’80s vibe of graphic white bistro chairs against black floors, heavy floral wallpaper and the wail of David Lee Roth alternating with Prince Paul. But the best part is the food. Soft and messy pizzas loaded with toppings like dandelion and bubbling scamorza, line-caught trout with its own roe (pictured above) and thick, bone-in veal chops are just some of the standout items. The star, however, is the stripped-down caesar salad: grilled sections of radicchio and romaine, crispy-fatty strips of roasted pork belly, chunks of buttery crouton, fresh white anchovy, a slick of garlicky dressing and a liberal dusting of parm. From bite to bite, it’s crunchy, smoky, salty and sweet—more of a marvel than any molecular gastronomy trick. 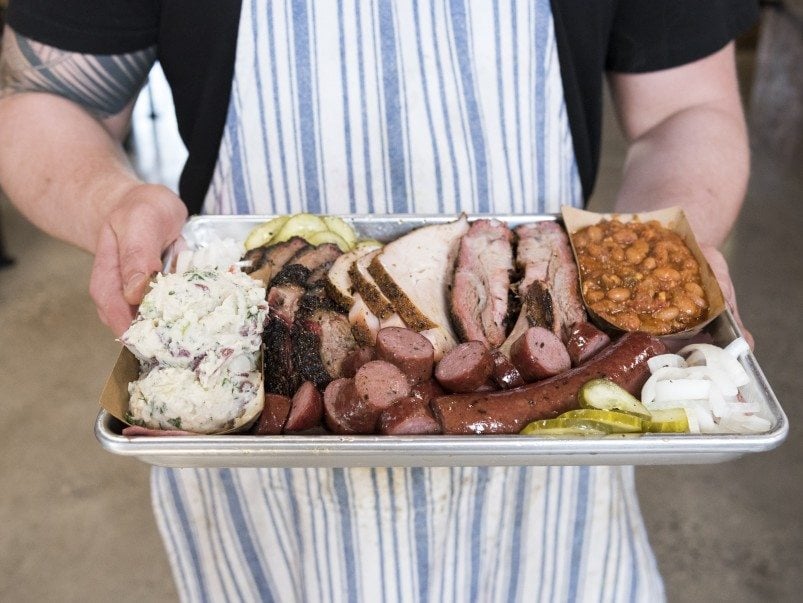 Adam Skelly’s barbecue is so mind-blowingly good that it’s worth venturing into the wilds of a Leaside industrial park for. The cavernous concrete space is a smokehouse pure and simple, with rolls of paper towel on the tables and a menu penned on butcher paper taped to the wall. Everything here takes a spin in the Oyler1300, a massive wood-burning smoker: brisket, already on the cusp of disintegration, melts in your mouth, and pork ribs flecked with caraway seeds are perfectly pink inside. Sides are as nature and the Deep South intended: kitchen-sink potato salad, creamy slaw and rich beans flavoured with beef tallow. There are no spoons in the collection of plastic cutlery—instead, the slices of Wonder Bread served with each platter are meant for soaking up escaped sauces. 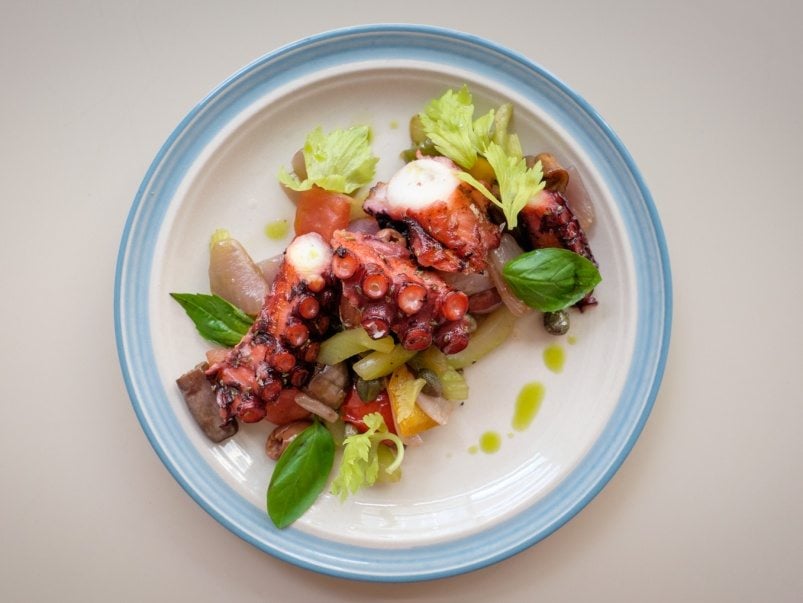 Chef Roberto Marotta’s Sicilian-inspired dishes offer a level of sophistication that puts this new St. Lawrence spot above many of the city’s trattorias. Acciughe—punchy white anchovies and roasted red peppers on crunchy herb butter–soaked crostini—are a perfect two-bite snack (or spuntini, as the Sicilians would have it), and sourdough starter makes an exceptionally puffy pizza crust (pictured above). It’s a welcome change from the Neapolitan tyranny.

More on the Maple Leaf Tavern

What’s on the menu at the Maple Leaf Tavern, a revitalized east-end institution

Once an east-end dive, the 106-year-old tavern has been given new life, thanks to a two-year, $2-million makeover designed to position it as a legitimate dining destination. Chef Jesse Vallins churns out what might be his best food to date, much of it from a wood-burning oven. The roasted vegetable salad with fried halloumi gives the kitchen a chance to grill up whatever’s in season, and the burger—a patty of ground strip loin topped with house-made cheese, garlic mayo and dill relish—could hold its own against any of the city’s best (pictured above). Kegged rye and gingers (made with artisanal ginger beer, natch) are a fun touch. 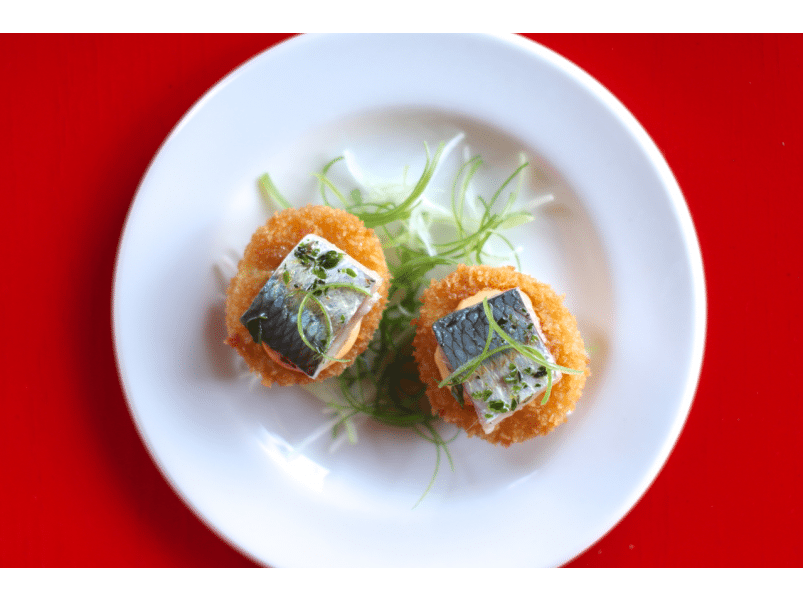 The owners of Quince recently closed shop, and gave their white-linened Yonge and Eg room a cooler vibe and a gin list 42 bottles long. The menu focuses on Dutch staples with Indonesian flavours—a delicious hybrid born of the countries’ colonial history. War Fries are the poutine of the Netherlands: drenched in sweet peanut sauce, and dotted with mayo, scallions and bird’s eye chilies, they’re guilt-inducing excellence. Other plates—like a seared steelhead trout (pictured above), and charred broccoli with preserved lemon and sambal metah, a tangy relish—are more refined, and consistently capture the punchiness, depth and freshness that makes Indo-fusion food so satisfying. Little touches, like house-made tonic, imported caramel sauce for the olie bollen (apple-currant fritters) and servers who deliver culinary history ­without being obnoxious, make guests feel like they’re still in fine-dining hands. 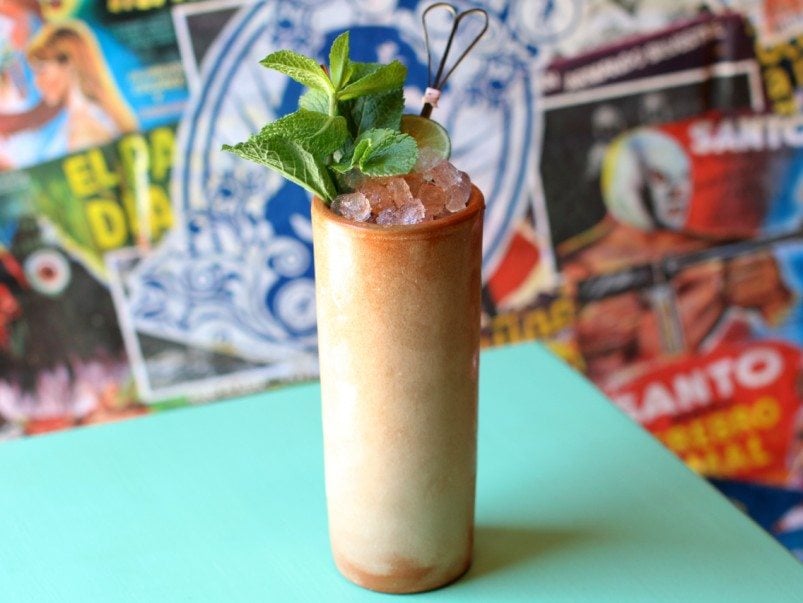 Mescal is the inspiration behind this new Mexican bar in Kensington—nearly 40 kinds are served in flights and blended into expensive cocktails. Clay copitas of the stuff cover the tables of the lantern-lit patio. The short menu, overseen by co-owner Grant van Gameren, makes an effort to transcend Tex-Mex clichés with traditional ingredients and preparations, yet the food isn’t too serious. The hulking guacamaya torta stuffs a chewy, avocado-slathered bun with luscious grilled pork shoulder, crunchy chicharron and cilantro, while the sope brings an earthy potato-corn shell filled with salty refried beans, spicy minced chorizo and mellow salsa—a sunny-side-up quail’s egg binds the whole mess. There are a few mehs amid the mmms, like a blue corn quesadilla that tastes of little more than bland tortilla and queso fresco. And the staff, though knowledgable, are so aloof they could be mistaken for a comedy troupe parodying attitudinal servers. 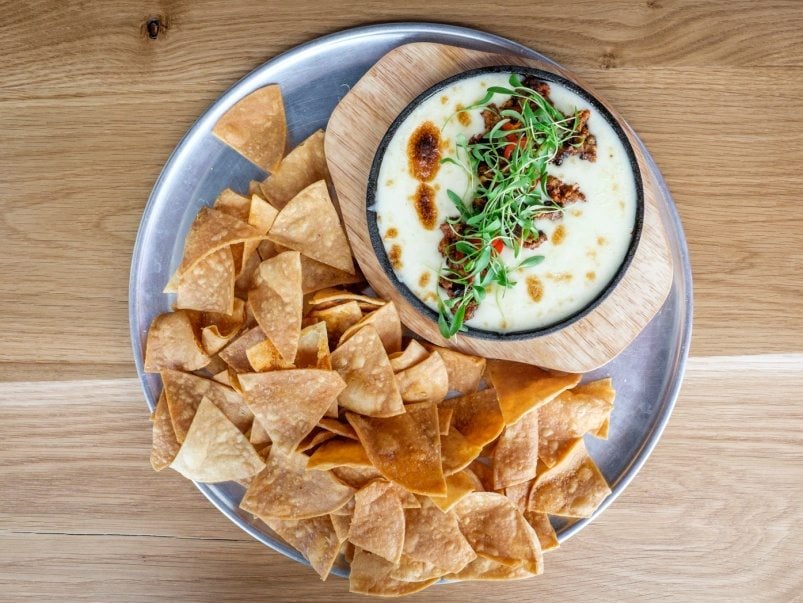 What’s on the menu at Macho Radio Bar, a new Tex-Mex joint with arcade games and a giant patio

This addition to the city’s Mexican scene is a colourful alternative for suits and CityPlacers looking to decompress over a margarita, rather than with a beer in a cookie-cutter Bay Street bar. The decor is just the right side of kitschy, and the menu emphasizes fun over authenticity. The Santa Fe salad is a hodgepodge of flavours and textures made up of charred corn, pulses, avocado and corn nuts—it’s crunchy, creamy, tart and salty all at once. Cocktails and pitchers of spiked aguas frescas play nicely with everything, even the disappointing nacho fries—regrettably limp and under-seasoned spuds, layered with a meagre ration of insipid chorizo, pickled onions and green goddess aïoli. The apple “em-pie-nada,” served with a scoop of coconut vanilla ice cream, is the perfect down payment on tomorrow’s hangover. 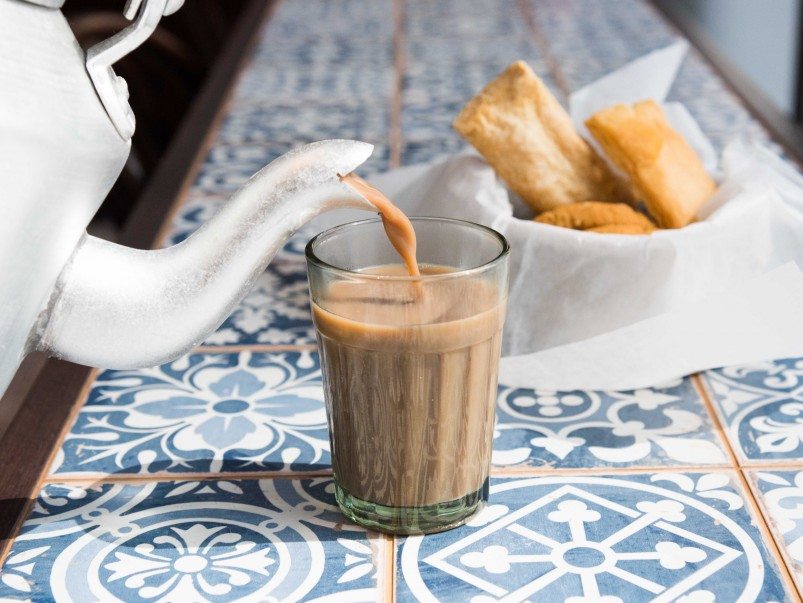 What’s on the menu at Bombay Street Food Co., a taste of Mumbai on Bay

Sporting the brilliant blue tiles of a Mumbai café, Bombay Street Food celebrates the Parsi-influenced flavours of a style of Indian cooking not easily found downtown in a quick-service restaurant. Bay Street locals and workers head here during their lunch hours and after work for Frankies: vegetable fritters or grilled curried meats, served sandwich-style tucked into roti. Eggplant bhaji, with its thick slices of deep-fried veggies, lemon-yellow chutney and refreshing kachumber (like an Indian cucumber-and-tomato salsa) comes on chewy pav rolls, ­custom-made by Ace Bakery. Mango and cardamom lassis (pictured above), served in old-fashioned milk bottles, are thick and tangy treats that could sub in for any of the desserts. 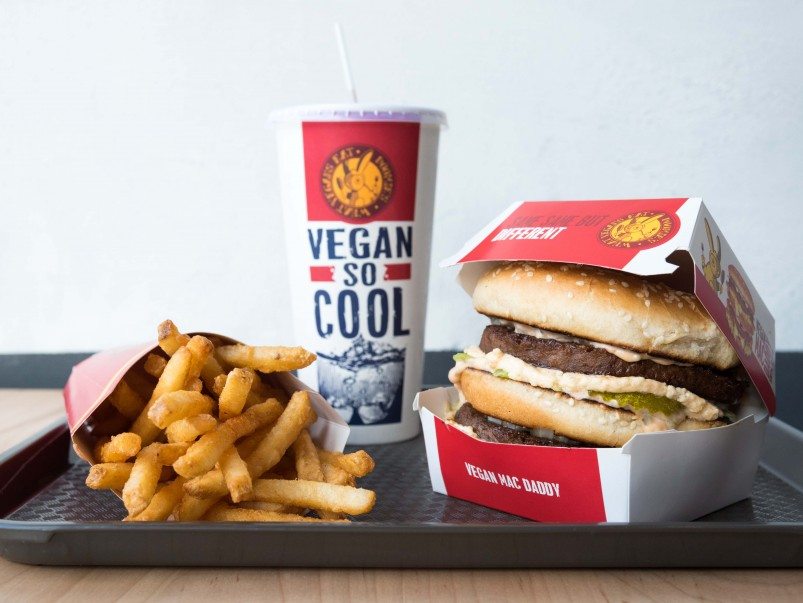 The deep-fryer is the lifeblood of this Parkdale kitchen, which serves up greasy, spicy and saucy not-good-for-you grub that’s entirely vegan: fries, burgers, tacos, nachos—not a single salad. The Vegan Mac Daddy (pictured above), an off-menu item, is junk-food perfection, composed of two soy patties, lettuce, pickles, onions, cheese and special sauce on a sesame seed bun. Crispy breaded “chicken” doused in vegan mayo and cheese is alarmingly convincing, but the “beef” on the Philly Fun Fries, not so much. A hot-from-the-oven chocolate chip cookie is cloying but comes with soy ice cream that could fool any diehard dairy fan. There are great boozy shakes, but the Cucumber Cooler, made with gin, soda and elderflower liqueur, is an absolute tonic to all that grease. 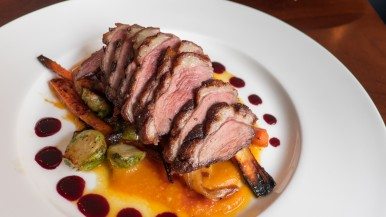 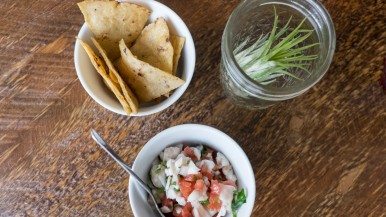 Review: As the city approaches peak taco, Campechano stands out from the crowd 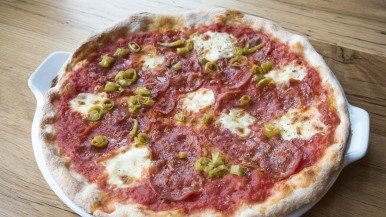 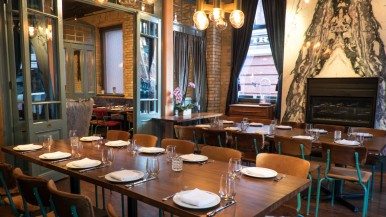 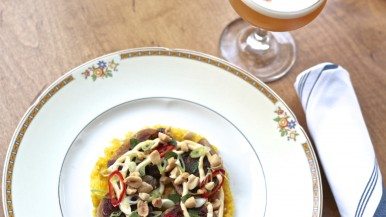