The artisanal toast craze (yeah, we’re eye-rolling, too) shows no sign of slowing down. Why fight a good thing? There’s something super satisfying about a thick, crispy-chewy slice of freshly baked bread slathered with rich goodies like buttery wild mushrooms, sweet shrimp and even coconut “bacon.” Here are some of our favourites: Miche, a rustic French sourdough bread from Thuet Bakery, is the base for these shareable toasts at Bar Begonia. This vegetarian version (above right) is spread with chèvre, then topped with cranberry beans and roasted red peppers. $8.

Cheese on toast. And yes, all I did today was eat. ??? #toronto #yorkville

Welsh rabbit is a boozy, open-faced (and rabbit-less) grilled cheese. At the Oxley, aged Canadian cheddar is melted with stout, Tabasco and Worcestershire sauce, then ladled onto house-made sourdough and slid under the broiler until the cheese starts to bubble and brown. $6.

For the loaded toast at Ceili Cottage, oyster and cremini mushrooms are sautéed in butter and white wine, then poured over house-made country white bread. A slab of melty Tipperary’s Cashel Blue gives it a funky, salty kick. $8.

Mid-day snack of PB & coconut facon brick toast with a side of @newyorkermag, the Washington #ideasforum on my laptop, and Grizzly Bear filtering through the cafe's speakers. Guys — I blinked and suddenly became a complete bougie! #foodtoronto #vegan #bricktoast #taiwanesefood #bougielife

At Grey Tiger, Bloordale’s vegan tea-and-toast joint, there’s the Priscilla, which is a riff on Elvis’s favourite sandwich. A slice of thick, sweet (vegan, of course) Hokkaido milk bread is spread with organic peanut butter and topped with banana slices and “facon”—coconut meat mixed with tamari, maple syrup and liquid smoke and baked until crispy. $7.

sometimes, in a quiet moment at home, i dream about @bar_raval's kitchen bread. it's a pretty perfect thing.

Bar Raval’s kitchen bread was originally made to feed hungry staff during the rush. “When we realized how delicious and balanced it was,” says chef de cuisine Keenan McVey, “we decided to share it with the masses.” House-made sourdough, baked daily, is toasted and spread with garlic mayo, then roasted piquillo peppers—marinated in garlic, olive oil, vinegar and sugar—and boquerones are laid on top. $6. 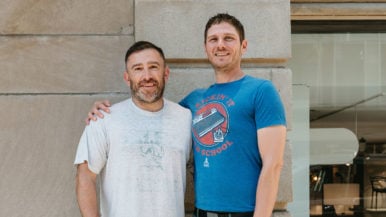