20 of our favourite bars and restaurants in Dufferin Grove, the 39th coolest neighbourhood in the world

20 of our favourite bars and restaurants in Dufferin Grove, the 39th coolest neighbourhood in the world 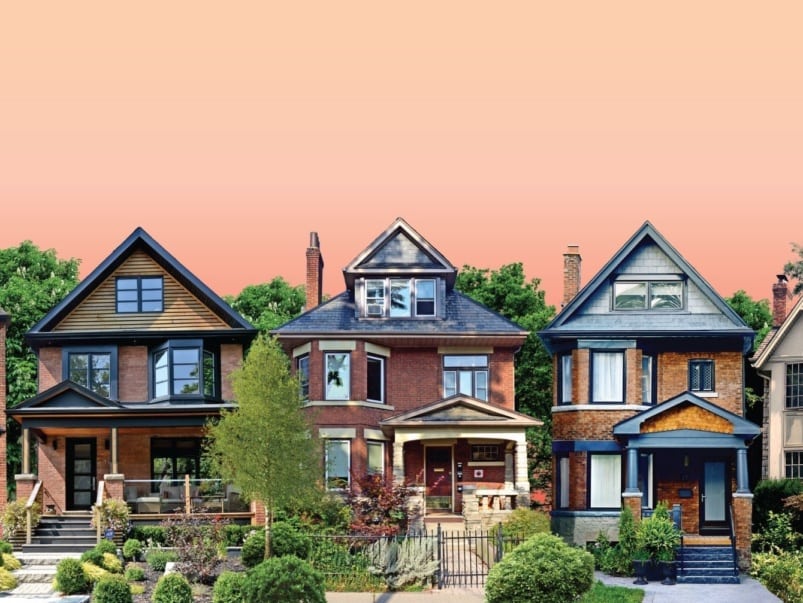 British travel mag Time Out recently ranked Dufferin Grove—the Toronto ‘hood bounded by Bloor, Dufferin, Dundas and Ossington—as the 39th coolest neighbourhood in the freaking world. The magazine claims that Dufferin Grove is one of the last affordable, centrally located neighbourhoods in the city, and that it retains a touch of “small-town charm”. Some of their other reasons for including it on the list: Burdock Brewery and the brand-new SoSo Food Club. Here, a slightly longer list of all the great restaurants, bars and bakeries that the west-end neighbourhood has going for it.

1184 Bloor St. W., 416-546-4033, burdockto.com
This Bloordale brewery’s genre-bending wine-beer hybrids taste like pure genius in a glass. Yes, the three-year-old establishment co-owned by Jason Stein and Matthew Park also makes inventive pilsners and saisons and Berliner weisses, which are always available, but it’s the inspired small-batch creations we’re talking about here—like the Ruby, a gorgeous, gem-coloured blend of saisons aged in barrels with sour cherries and cabernet franc skins, and blended with riesling from Ontario’s os Pearl Morissette winery. It’s the perfect showcase for the brewery’s terroir-driven approach to beermaking. (Pro tip: they also bake wonderfully crusty sourdough breads, which can be purchased at the bottle shop.)

1163 Bloor St. W., 647-430-3834, no website
The vibe at this modest Bloordale bar is familiar (think Cheers à la Jack Kerouac), and the crowd is legitimately eclectic. Melodic indie pop alternates with revered rock albums on the soundtrack, and a good selection of drafts complements cheeky specialty cocktails, like the Beauty School Dropout, which features gin, pineapple juice, prosecco and fresh blueberries. And the seasonal patio is one of the city’s best backyards.

928 College St., 416-533-7272, follybrewing.com
Toronto’s beer scene has plenty of ­cutting-edge newcomers, so it’s refreshing to also have at least one that’s happily obsessed with the olden days. That’s just how they brew things here in Little Portugal, drawing influences from Belgian and Old World beers that have been brewed since the Middle Ages. The Sunny Places sour pale ale is more contemporary but relies on a centuries-old variety of Norwegian yeast called kveik that gives it a time-tested tang.

1212 Dundas St. W., 416-588-4900, @churchillbartoronto
Near the corner of Dundas and Ossington, Churchill is a serendipitous mishmash of unpretentious watering hole and Portuguese sports bar (it used to be one) where chatty bartenders serve cocktails like the Tequila Last Word: tequila, Chartreuse, maraschino and lime.

864 College St., 416-538-1910, chiadorestaurant.com
While many restaurants strive to reinvent every six months, Chiado’s charm is in its consistency. The kitchen specializes in traditional Portuguese dishes, like seared beef tenderloin served with tawny port gravy, pickled vegetables and black peppercorns. Other good choices can be found among the outstanding seafood creations, such as grilled squid with blistered flesh and just the right accents of olive oil, cilantro, citrus and garlic. The service is friendly but formal, and the massive wine list offers Toronto’s best collection of Portuguese bottles.

860 College St., no phone, trackandfieldbar.com
This 5,000-square-foot indoor lawn games bar features two bocce ball lanes and two shuffleboard decks—one of each is saved for walk-ins, and all are available to play free of charge. And for those waiting for a lane to free up: crokinole boards (think tabletop curling in the round) are available for sit-down play. Of course, lawn games are best enjoyed with a bit of booze: there are classic and signature cocktails on tap, as well as canned and draft beer.

970 College St., 416-531-1211, @prairieboybread
After two years of operating a wholesale bakery out of I Deal Coffee on Sorauren, the operation outgrew its square footage. At the new space, owner Grant MacPherson bakes organic sourdough made from Ontario wheat produced by K2 Milling in Beeton. In addition to hearty boules packed with grains and seeds, they also sell more indulgent loaves, like the cinnamon-raisin weekend special. Sandwiches are also on offer, along with spreads (like vegan Nutella) for the bread.

1120 College St., 647-352-7322, pomegranaterestaurant.ca/tavoos
This breakfast-and-lunch College Street spot showcases Iranian comfort food, and in the mornings, diners crowd around platforms and sit on plush floor seating decorated with pillows and Persian rugs. Both the kalleh pacheh, a rich soup made with sheep’s tongue and hooves, and the haleem, a belly-warming porridge of wheat berries and shredded lamb, are specialties. Still, it’s the eggs—served sunny-side-up over sautéed tomatoes and garlic, mixed with dates and walnuts, or studded with salty halloumi and smoked salmon—that have turned droves of Torontonians on to the merits of the Persian brunch.

1166 Dundas St. W., sosofoodclub.com, @sosofoodclub
This new Chinese snack bar and cocktail lounge in Little Portugal focuses on the cuisine from mainland China (Shaanxi, Sichuan and Shanghai) with dishes like lamb biang biang, and lobster with mapo tofu in an XO sauce. To drink, there are biodynamic wines and cocktails made with Chinese spirits and spices.

1438 Dundas St. W., 647-352-9120, thefed.ca
The Federal remains one of the best restaurants on a vibrant, ever-changing stretch of Dundas West. The room is cozy and effortlessly stylish—exposed brick, wood pews, flickering Edison bulbs—and the menu is thoughtful, detail-oriented and reliably well executed. On a recent visit, the kitchen sent out a parade of flawless, satisfying dishes: an earthy medley of chanterelle and maitake mushrooms on thick slices of grilled sourdough, elevated by Beemster and tarragon; juicy fried chicken served on pillowy waffles, doused in vinegary hot sauce; and, best of all, a perfectly smoky pork chop with a side of brussels sprouts charred in all the right places.

The Loveless Cafe and Bar

1430 Dundas St. W., 647-346-2402, @thelovelesscafe
Jamal Watson’s basement bar, Unlovable, remains Dundas West’s preeminent hipster haven. But his above-ground alternative—right across the street—is a place his tattooed regulars can graduate to when they grow tired of shouting over garage-rock DJs. Loveless transforms into a Reunion Island–slinging café at the crack of dawn, serving espressos and baked goods in the morning, and sandwiches and Jamaican patties into the afternoon.

A post shared by iMANiSHi JAPANESE KiTCHEN (@imanishijapanesekitchen) on May 31, 2018 at 2:16pm PDT

1330 Dundas St. W., 416-706-4225, imanishi.ca
The izakaya, run by a former Guu and Kingyo cook, began as an occasional pop-up but now has a permanent home in a former Portuguese sports bar. The standout dishes include sticky wings coated with toasted sesame seeds, fritters made of whole corn kernels, barely seared beef tataki, and a meaty squid tentacle grilled and slathered in soy sauce and butter, served with kewpie mayo. Though there’s Sapporo by the litre, the atmosphere is chill. Maybe it’s the Japanese soul records; maybe it’s the serious eating.

1288 Dundas St. W., 416-534-1200, sociale.ca
Its chefs may change, but at its core, the restaurant does not. Between the faux-wood panelling, the genuine warmth shown toward returning patrons by professional staff and the bar’s remarkable selection of unique, quaffable Italian wines, this cozy spot remains Toronto’s most authentic reproduction of dining by the Tiber. The kitchen captures the soul of the boot in the gnocchi, a pillowy foundation for tart tomato, chilies and a puddle of smoked ricotta that reads achingly simple, but is soul-food satisfying. Conversation pauses for chocolate terrine, a trinity of dense chocolate mousse, candied hazelnuts and spritely olive oil, and resumes only after every last bit has been scraped from the plate and licked off the spoon.

1454 Dundas St. W., 647-345-8300, antlerkitchenbar.com
All things foraged, wild and Canadian dominate the menu at this Little Portugal spot, but what else can be expected from a chef with the last name Hunter? While the ingredients might be local, the kitchen’s techniques span the globe: duck hearts are skewered yakitori-style and grilled to a tender finish beneath a soy glaze, and wild mushrooms are supported by caramelized onions and a sorrel pesto in a textbook tarte tatin. Venison shoulder served with a tasty ash-crusted chop is tough and bland, but the handmade pappardelle with braised rabbit, buttered leeks, sautéed spinach and, surprisingly, apricot preserve works brilliantly.

1434 Dundas St. W., 647-345-7005, midfieldwine.com
This casual wine bar is run by a couple of stone-cold wine nerds: Giuseppe Anile and Annette Bruley. You go to try esoteric varieties, like Hungarian kékfrankos and Greek moschofilero. The room, a barely rehabbed Portuguese sports bar, fills on Saturdays, but in the most laid-back manner. Chef Mark Redman’s seasonal snacks—like an artichoke salad with hazelnuts and comté cheese—are excellent.

1242 Dundas St. W., 416-588-7408, smokesignalsbarbecue.ca
Nick Chen-Yin’s menu has no allegiance to any particular style of barbecue. After travelling through the south, and staging at Austin’s Stiles Switch, Chen-Yin chose his regional favourites: Carolina pulled pork, Tennessee pork ribs, Texas brisket. Although the meats are traditional, he’s a bit more playful with the sides. The burnt end–studded baked beans and his mac and cheese might be by the book, but a few others—like the coleslaw flavoured with pineapple, fish sauce and mint—have Southeast Asian twists.

2 Lakeview Ave, no phone, @hanm0to
Leemo Han’s secretive Dundas West izakaya bears the junk-shop look he and brother Leeto established at snack-food spot Oddseoul. As at the best izakayas, the chef maintains a healthy disregard for dieters. Prime example: a sandwich of roasted, super-fatty pork belly, coated in soy remoulade, barely contained by a coco bun. Dyno Wings are stuffed with spicy pork and rice, deep-fried and served in a takeout box. Even more impressive are a tartare of fantastically fresh hamachi and the nasudengaku—Japanese eggplant charred until creamy, the length of it covered in finely shredded deep-fried beets.

924 College St., 416-792-4497, theemmetray.com
Overstuffed armchairs fill up with floppy-tuqued 20-somethings who are more subdued than the revellers elsewhere on College. The bar is known for a huge selection of rare brown liquors—including whiskies from Japan, Corsica, Sweden, South Africa and India—so it’s a happy surprise the place also makes a great burger topped with bourbon barbecue sauce and fried cheese.