This week on the Real Housewives of Toronto, we get to take in more of Muskoka’s beauty from the comfort of our shabby apartments. Joan’s dock party is over, but the women spend a few more days enjoying the lake and amazing weather. The looming fête of the week is Kara’s rustic Italian dinner party, which just so happens to be scheduled on the night of Roxy’s birthday—a fact Kara either doesn’t know or is purposefully forgetting.

Catch up with our episode recaps 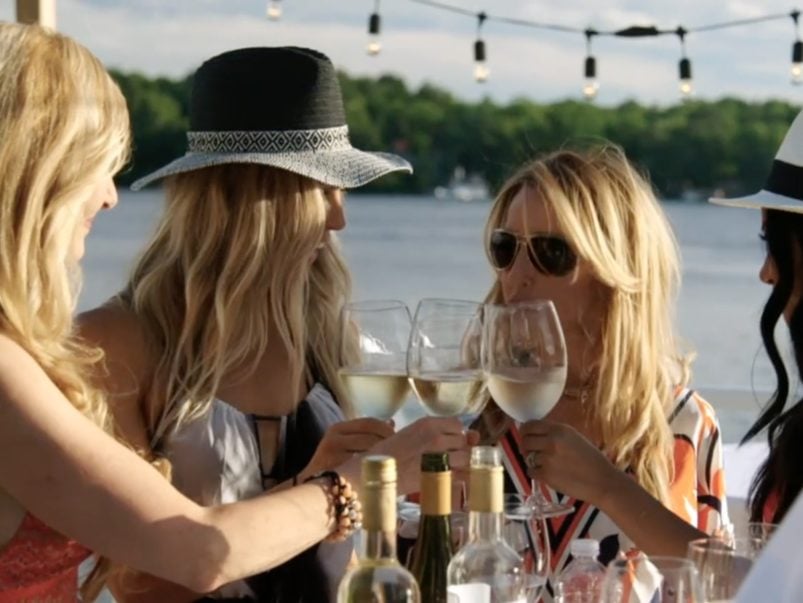 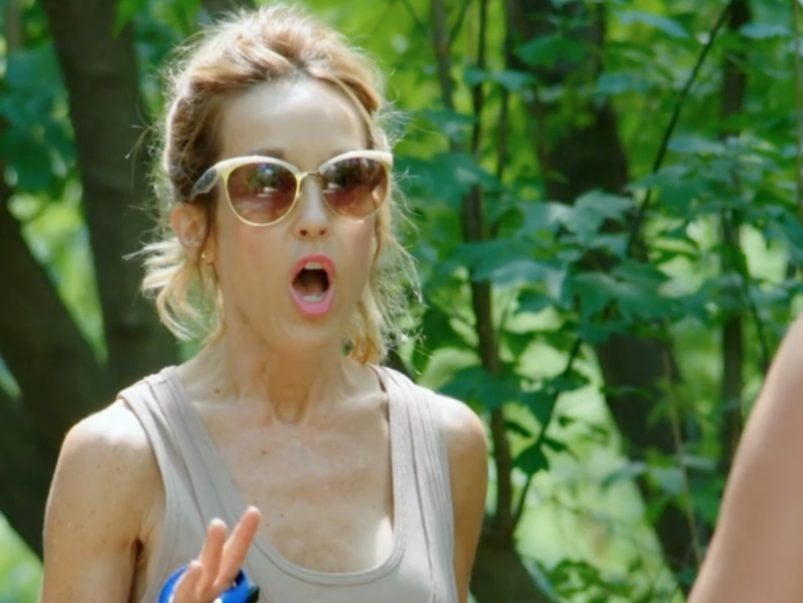 Real Housewives of Toronto episode two recap: the return of the Face Hickey 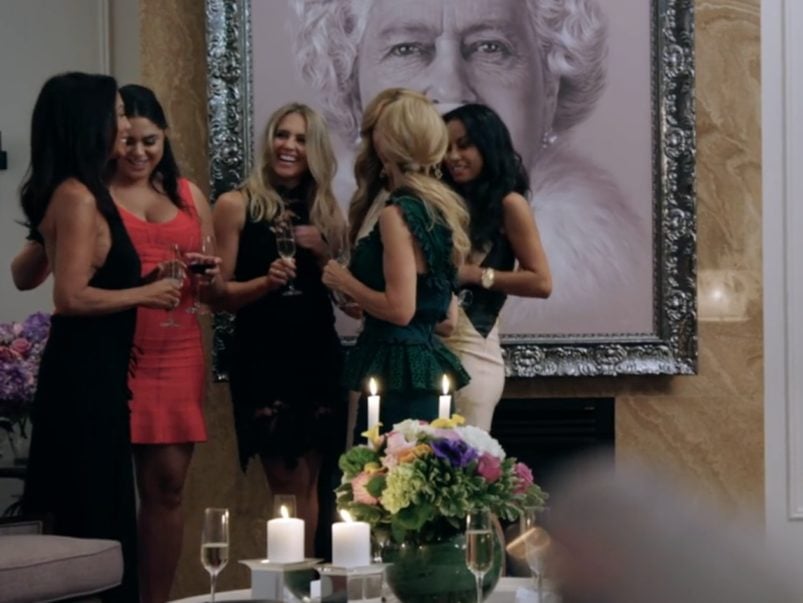 The first episode of Real Housewives of Toronto, recapped

To get us started, a few of the women go stand-up paddle boarding off Joan’s dock. Roxy is afraid to stand up because she’d just flown someone up to Muskoka to give her a blowout. “I could have stood up on that paddle board,” she says. “But I just can’t take those sort of risks.”

Sitting on their paddle boards, the women debrief about the dock party. We hear some fun gossip about Jana running into her “Muskoka Guy,” who she reconnects with every summer because, as she says, “we’re all about traditions in Muskoka.” Go Joga Jana! Chatter soon turns to Kara’s dinner party and whether or not it’s going to be a surprise party for Roxy (spoiler: it’s not). Roxy is adamant that Kara knows the party is scheduled on her birthday because, before their fight earlier this season, Kara had invited Roxy as a cottage guest for the week and offered to host her birthday party. Then the Face Hickey of 2002 reared its ugly head.

Joan—who is unable to handle even a whiff of conflict—encourages Roxy to take the high road. “It’s just so nice of her to have us all over,” she says. This is becoming Joan’s M.O. She plays by the rules of a Corporate Wife, which, as we learned in the second episode, means displaying an almost robotic loyalty and calmness. She is always telling the women to give each other the benefit of the doubt or to “just let it go!” The producers must hate this. They are paying these women to fight and have invested four episodes and one wobbly seaplane ride in hopes of a rustic Italian blow-up. Pipe down over there, Corporate Wife! Kara then invites Ann over to go fishing on Lake Rosseau. Kara says her and Ann have been talking about fishing since they met, so Kara’s excited to show off. “I’m not all talk. I’m actually an angler,” she says. These women will one-up each other over anything.

Ann shows up in her goofy tailored fishing outfit and tries to have a laugh about it with Kara. Instead, Kara is stone-faced and mortified. She ignores all Ann’s attempts to make a joke out of the hideous costume and instead makes fun of her off camera. As Roxy says, “Kara lacks a sense of humour? Shocking.”

Kara uses the downtime on the boat to expound upon the patience required to fish for Muskoka lake trout, but Ann is bored. This isn’t the Alaskan salmon fishing adventure she was expecting. Kara also tries to start a rumour about there being “sex tents” at Joan’s dock party. She’s trying to paint the dock party as a trashy affair, but, more likely, she just didn’t get another guest’s sex-tent joke. Or maybe sex tents are a practical addition to a 700-person party. Joan did seem to have all her bases covered… Next up, Kara and Joan meet at the Norma and Miller Alloway Library in Port Carling, which Kara and her husband (Graham Alloway) helped fund. Kara is excited to show off her benefactor status and is halfway through a story about how long the Alloways have cottaged in Muskoka when Joan interjects: “I think I mentioned to you, we bought an island last year.” The look on Kara’s face is priceless. Now that is a one-up.

The night of the dinner party arrives and Kara is running around her property making final preparations. She keeps talking about how nervous she is and how she just wants to be liked. “The Toronto social scene is not forgiving,” she says. She keeps saying the party is her only chance to make a first impression on her new friends. That doesn’t make any sense. You have been hanging out together for weeks. You hung out together yesterday. It would be easy to feel for Kara, who is visibly stressed, if she weren’t being so damn annoying. She tells her chef she wants the meal to have “fooood,” and that it should be “passionate” and “sensual.” This is when Housewives look the craziest—when they are standing across from a normal woman from Bracebridge who just wants to cook you a dinner and go home.

Anyway, the whole scene is hijacked by Kara’s ridiculous Moschino cellphone case in the shape of a giant rubber Windex bottle. Believe it or not, these cases were once a hot commodity. Even though they will never fit in your pocket, they will live forever on Amber Rose’s Instagram account. Grego, Jana and Joan meet up to have a glass of wine on the dock before the party. Once again, these three are the best. They are always smiling and laughing and taking care of each other. They come up with series of hand signals to use later at the party in case one of them starts getting too tipsy or saying something crazy. Then Joan drives them off in her speedboat and everything I said about her being robotic evaporates into the wind.

Ann and Roxy arrive at Kara’s first and are immediately miffed when Kara hands them a drink but doesn’t acknowledge that it’s Roxy’s birthday. “I took the time to extend an olive branch and come over here on the night of my birthday and she can’t even raise a toast? And she gives me a glass of prosecco? Where’s the Dom?” Line of the night goes to Roxy.

The party really is beautiful. The women eat hors d’oeuvres in front of the lake, from plates covered in flowers. There are lemons on the table and Kara has flown in autographed copies of Mamma Agata’s Italian cookbook for each of her guests—a gift that is trying very hard. Every time they see the book on their bookshelf, they will be reminded that Kara used an online store to pay a stranger in Italy to write their names in it. This goes double for Roxy, who accidentally gets a copy dedicated to “Salvatore.”

Roxy and Kara have a brief moment of reconciliation. Kara apologizes for yelling at her about the Face Hickey in the dog park, but Roxy is still weirded out that Kara is pretending she doesn’t know it is her birthday, so their feud definitely isn’t over.

Throughout dinner, the women, with the exception of Kara, proceed to get hammered. They are singing and laughing and praising Kara for the meal. It gets to the point where Joan is slurring her words, but as Grego says, “It’s vacation! It’s festive time!” Roxy can’t agree more: “My idea of a great dinner party is when I can’t count how many bottles of wine have been finished.” Amen. But Kara is pissed. She shudders when the women mention skinny dipping (again) and bars them from doing it. In her off-camera remarks, Kara accuses the women of insulting her party and gives us a classic “money can’t buy you class” line. The saving grace is that the rest of the women are too drunk to notice and continue having a great time.

The next morning, Joan hosts Grego, Jana and Kara for brunch. While the fun girls giggle about the previous night, Kara throws jabs at their drunkenness, culminating with the reveal that she found a pair of panties on the ground by the lake: “Who took their panties off at my dinner party?” she asks. It was Joan. Oops.

Kara invites them to her place to go tubing and promises her husband will take it easy on them. Off camera, she reveals this is a revenge plot meant to make the hungover women barf. Remember, this is the woman who brags about being a born-again Christian. “Thou shalt not take thy friends Revenge Tubing” must be in the good book somewhere. She sets them up on a water banana because it is the bounciest. The plan doesn’t work, though, because the other women are having a blast. They love being in Muskoka, and tubing with a hangover is just part of the fun.

When the boat rips a big turn, all four women fly into the water. This is when Kara’s plan backfires for real: Someone accidentally kicks her in the ribs under the water. Kara struggles to climb back on the tube and has the boat drag them slowly back to the dock.

Next week, we will learn the extent of Kara’s rib damage, but it appears her Revenge Tubing stunt has angered the Muskoka gods. It may be time to line up a significant family donation to a Port Carling Presbyterian church.