What do Toronto women with flashy wardrobes and a taste for fame do when the weather warms up? Take to Instagram, of course. Here, a check-in on what the Housewives are up to this summer

Earlier this month, when Corus broke the news that The Real Housewives of Toronto would go on “hiatus” (but has not officially been cancelled), Roxy announced she’s already started filming her own spinoff show, The Life of Luxurious Roxy. Sources say she has been spotted around town with a camera crew in tow, and she promises a teaser will be online soon. In the meantime, she continues her #MySizeRox campaign for body positivity, posting photos of her working out with a personal trainer:

Happy Global Wellness Day! I started my day off with a training session and a good hard sweat ? do something good for you today, move your bodies and spread positivity. Tag your confident photos with #MySizeRox I am wearing @additionelle workout gear Tan by @sindysun_instantattraction.ca #globalwellness #bodypositive #confidence #instagood #curves #feelgood #move #weekendvibes #workouts

But hard work deserves a vacation. Here she is in Negril, Jamaica:

Today on the official first day of summer, I stand proud in the body I've been given. Summer should be about joy and laughter, but for so many it means a flood of insecurities and anxiety about our bodies. Do I look too big? Too small? Too flat? Too full? If only I could loose 15lbs, if only I could have one cup bigger. I hear it every time people put on a swimsuit. I urge you to STOP! Just decide this is the summer you're going to love the parts you hate. This is the summer you're going to hear pool party and think of fun times before anxiety. So here I am wishing you a summer full of love, full of throwing on your swimsuit and running down a beach, to letting go of fears, anxieties, to not judging ourselves against one another. So get out those swimsuits and stand proud in the body you've been given & when you do tag your photos with #MySizeRox ?❤️? Roxy @royaltonnegril @sunwingvacations @sandpipersswim @holly_eyewear

Jewel encrusted parrots on my kaftan ?? what every girl needs to achieve tropical glamour! ? On my site for $198 (link in bio) @luxuriousroxy x @shopflyingflamingos #diamondclub

She has also been doing a ton of outreach in an attempt to build her #MySizeRox army. Here she is visiting a fan in the hospital:

This is the gorgeous Jen and her sister Rachel. Jen has just conquered a 17 hour surgery to remove a benign brain tumour that was hindering her fabulousness. Rachel reached out to us to let us know that Jen was not only a part of the #mySizeRox army but a total glam girl who loves flowers, dogs, makeup and can't leave the house without lashes….needless to say we have a lot in common. Rachel let us know that Jen was feeling a little down and so we surprised her today with flowers and a visit. I am so inspired by this beautiful 16 year old girl who has an amazing spirit and after undergoing some tough times truly embodies the confidence I speak of. Let's all cheer Jen on in her recovery! Xox I've also promised to take Jen to @sephoracanada when she's out on a shopping spree to glam up post surgery. @jenniferritchie__ @rach.ritchie4 #confidence #girlpower #sisterhood #inspire

When Ann isn’t doling out parenting advice for the one per cent, she is lamenting her own parenting fails on social media. According to this Instagram post, Ann’s stepson, Rock, fell off the roof of her house while trying to film a Snapchat video and fractured his leg in four places. Rock is recovering:

Social Media is not the be-to-end-all. #sadly, my son chose to do a @snapchat video and jumped (or fell) from the roof of our home (3.5 stories) while taping. It (the video) was not "saved" – but he (thank goodness!) was. He fractured his leg in four places and crushed his ankle – he will walk again in five months. Rock is lucky to be alive. I share this as it is "out there". I am heart broken (as is our family) – but hope that we can learn that sensationalized videos and that "how can I be seen" moment is not the answer. I am trying (as a new parent to Rock) and love his kindness, love of people and our incredible relationship. As with every tough turn in life – try not to judge – instead understand and "give love" – that is all that is.

Ann definitely hasn’t lost her wild fashion sense. Here she is at a Toronto Botanical Garden event, where she won a prize for best Couture Hat:

She also took to the red carpet with some of the other Housewives at the Power Ball earlier this month:

It looks like Joan poached Kara’s stylist, Sergio El-Azzi. Sergio appeared in a few episodes of The Real Housewives of Toronto, first as Kara’s assistant at a fashion event, but judging by his Twitter account, the two of them had a serious falling out. Luckily, Sergio has other Housewives in his back pocket. He and Joan recently co-hosted a World Vision Canada event at the Versace store in Yorkdale:

@tuxedosergio THANKYOU for making this wonderful event for @Versace and @worldvisioncan happen. Thank you for inviting me to participate and co-host with you. Thank you for supporting @worldvisioncan a cause near to my heart. You created every step in the process with ease, grace and fun. It was a huge success because of you, my friend. #goals #determination #shopping #endfamine #friends #support #fun #eventnight @cassandrajhair

Joan knows how to philanthropize. On the same evening as the Power Ball, she also made it to SickKids’s Scrubs in the City gala:

And here’s the view from the dock of Joan’s stunning Muskoka cottage. Is it dock party time yet?

In a happy birthday message to Bravo kingpin Andy Cohen, Kara reminds us that she is the franchise’s most connected Housewife. The show’s mean girl posted this old photo of her with Andy and The Real Housewives of Beverly Hills stars Kyle Richardson and Mauricio Umansky at the Bravo Club House in New York City:

What do Kara and President Donald Trump have in common? Sons named Baron. Here are Kara and Baron dining at the Beverly Hills Hotel Polo Lounge during a recent trip to L.A.:

Back in Toronto, Kara turned up at the launch of bestselling author Kevin Kwan’s new book, Rich People Problems, hosted by Shinan Govani at the Thompson Hotel:

And then there’s this: a rap single about Kara called “Real A$$ Housewife.” Sample lyric: “Racking up the bills but I don’t care the slightest / ‘Cause my closet’s looking like it just got touched by King Midas.”

After a decades-long hiatus, Grego is finally back in the dance studio. The former ballerina takes a tango lesson at Toronto’s DanceLife X Centre:

What better than a tango lesson to make the rain disappear in favour of sunny skies???? Today's class was animated by fantastic music and intriguing dance steps that completely lifted my spirits! Is there an activity that contributes to lifting your spirits? Thank you Boris! You are an amazing and a patient teacher! @dancelifex

On Father’s Day, Grego Instagrammed this shot of her kids with their father, Pierre Jutras. He’s the owner of The Spoke Club and Spoke on the Water, which—unlike the rest of Toronto Island—is open this summer:

The Real Housewives of Toronto’s official francophone can’t stay away from her hometown for long:

The doors are open at Joga House, Jana’s new boutique gym in Yorkville, and she is as busy as ever building her fitness brand:

So much respect and love for this tribe! #Repost @jogahouse (@get_repost) ・・・ Saturday Squad? Visit www.jogahouse.com to sign up for a JOGA session today and get trained by one of our fierce coaches!

And here she is teaching a Joga class on the rooftop of the Shangri-La Hotel on Global Wellness Day:

But of course there is always time for the girls. Jana, Grego and Joan celebrated the Australian premiere of The Real Housewives of Toronto with a few bottles of champagne:

HELLO AUSTRALIA!!!!! These are my true friends and we like doing reality TV with a lot of fun! Cuz that's who we are ! Enjoy the show #rhot #reality #tv #australia @slice_tv @arenatv 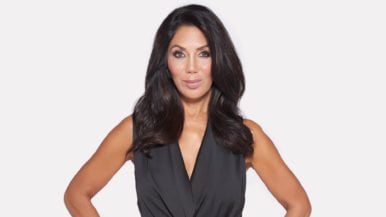