The project, called the Toronto Sunrise Series, began in winter 2013, when Kumabe and his friends decided to wake up early and get together to watch the sun peep up from the horizon. That morning sparked something. “It triggered the idea that every morning is different. You never know what you’re going to get,” says Kumabe. “Once you see a vibrant sunrise, you’re addicted.” He occasionally arranges sunrise meet-ups for anyone who wants to join him on a shoot; he announces the details on his Instagram. The biggest reward, he says, is spending time alone in nature during the most still part of the day.

Selections from Kumabe’s Sunrise Series are on display at Humber College’s The First Light exhibition, on now until March 17. We asked Kumabe about his early-morning rituals and most stunning break-of-dawn scenes. 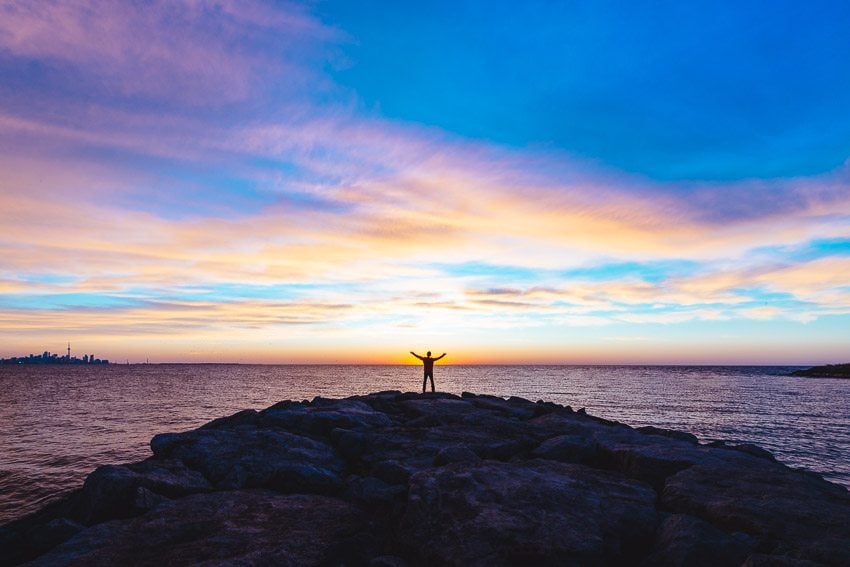 Orchestrating this self-portrait at Colonel Sam Smith Park was less complicated than it might seem. “This photo was more of a fluke than anything else,” he says. “This is what happened on my first try.” After setting the timer on his camera, Kumabe  happened to position himself in just the right spot. 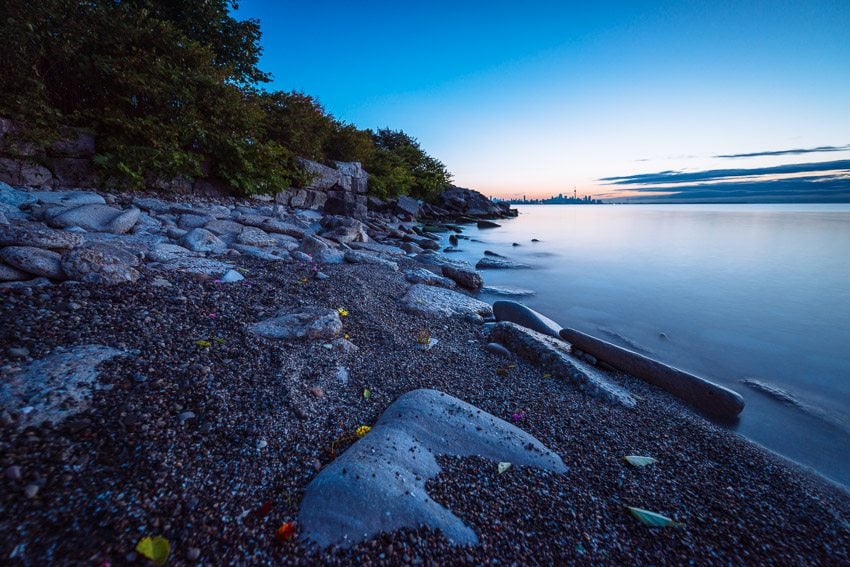 Kumabe took this photograph at one of the city’s lesser-known green spaces, Prince of Wales Park—he was lured by the rugged rock formations on the shore. “That morning, there were leaves scattered on the beach. That’s what attracted me to it,” he says. He thinks someone else must have strewn the coloured leaves about before he arrived. 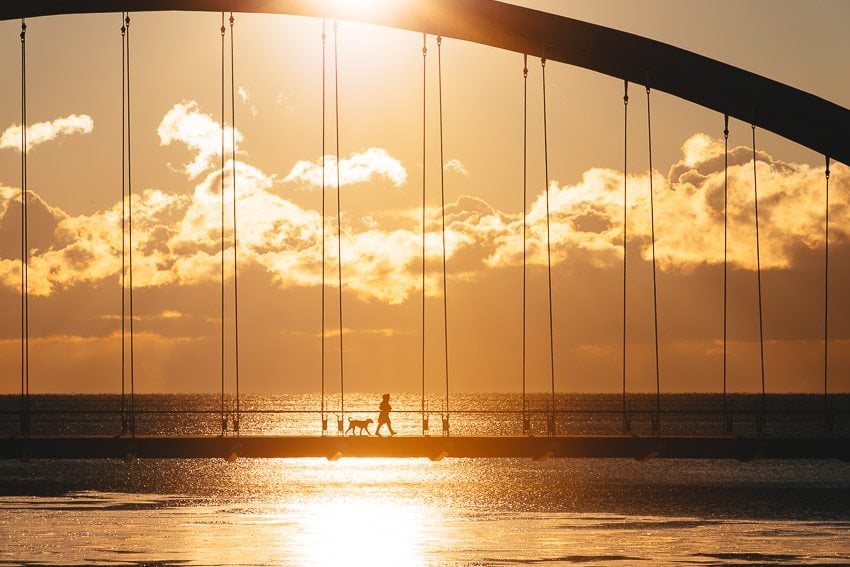 The blood orange glow gives off a summertime vibe, but look closer: the woman walking her dog is wearing a parka. This shot of the iconic Humber Bay Bridge was taken in January. “It was a must-shoot place, but I didn’t do it until later in the series,” he says. Winter was the best time to photograph this structure because the sun rises right above the arch in the colder months. 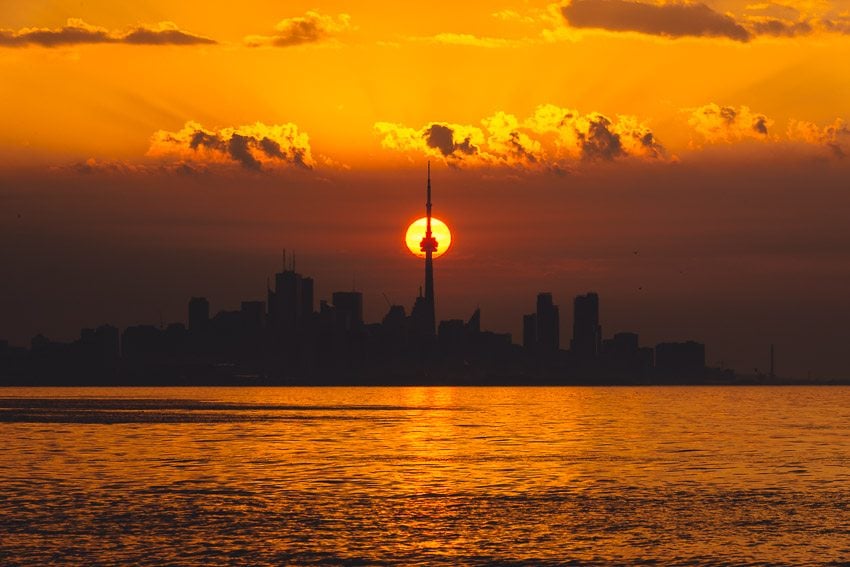 Kumabe took this shot in June, minutes before 6 a.m. He says finding the motivation to wake up at unholy hours isn’t that hard. “I can do it because I know how I feel when I get a nice sunrise,” he says. “And, in the winter, the sun rises later, which plays to my advantage.” This shot was taken from Colonel Samuel Smith Park, one of the parks he frequents most. 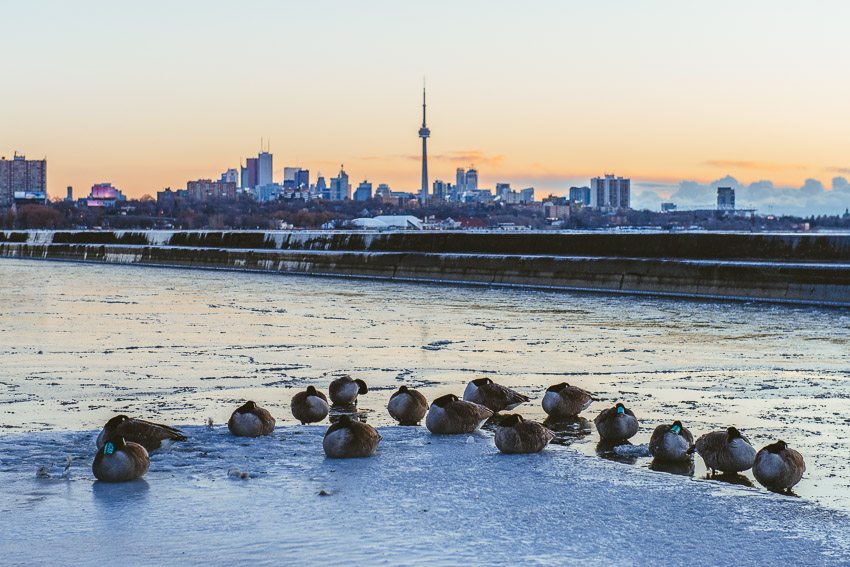 When Kumabe showed up to this west-end scene last winter, the ducks were in a deep slumber. “They were all sitting on top of the ice. Most of them were sleeping, so I tried not to wake them up,” he says. Spotting wildlife during a shoot, Kumabe says, always makes for a better experience. 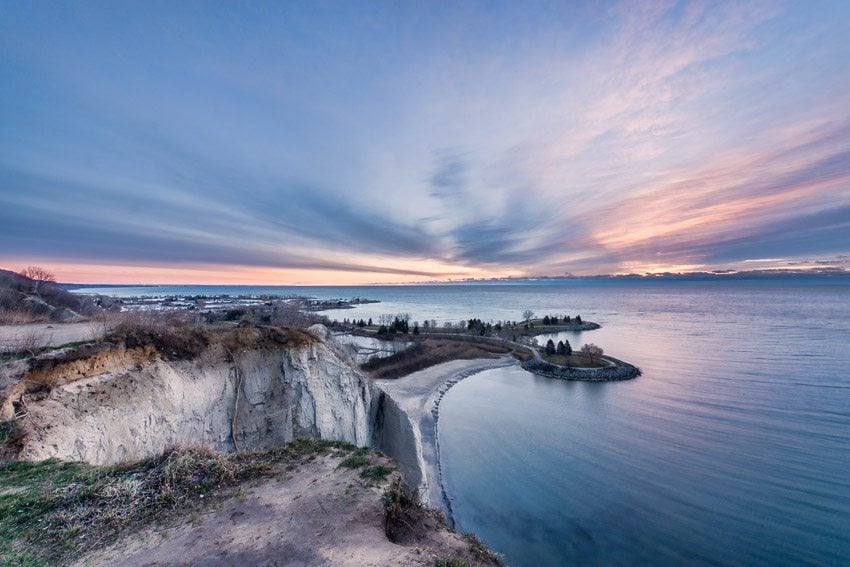 The Scarborough Bluffs were among Kumabe’s must-shoot locations for this series. He waited to shoot them during a later winter sunrise because he had to trek from his home in the west end. The site from which he took the photo has since been fenced off. 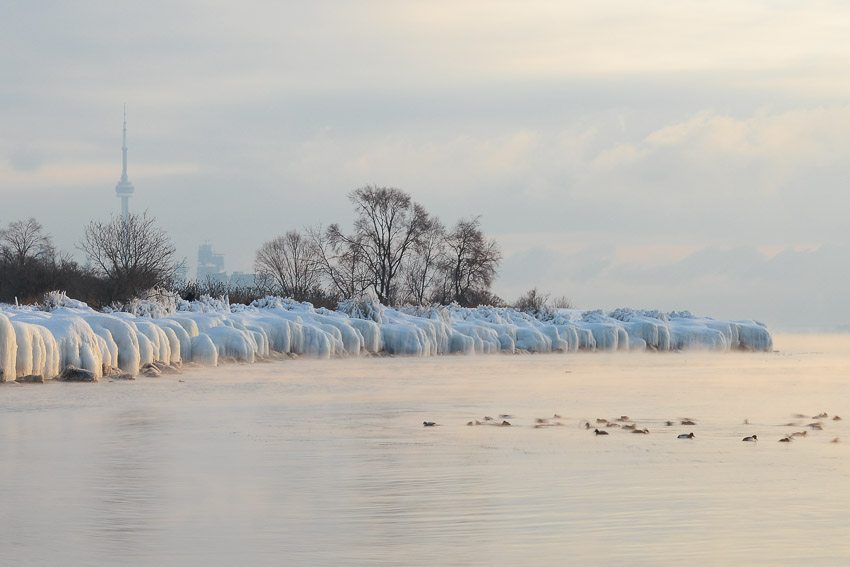 Remember the so-called “polar vortex” of 2014? While most people hid indoors, Kumabe was busy capturing the frozen mornings on camera. This scene of rock formations cloaked in ice is from Humber Bay Park East. “I was actually surprised that the shore was frozen like that,” says Kumabe. “That’s what I wanted people to see—the edges of Lake Ontario can look this way. I wanted to show how cold it was.” 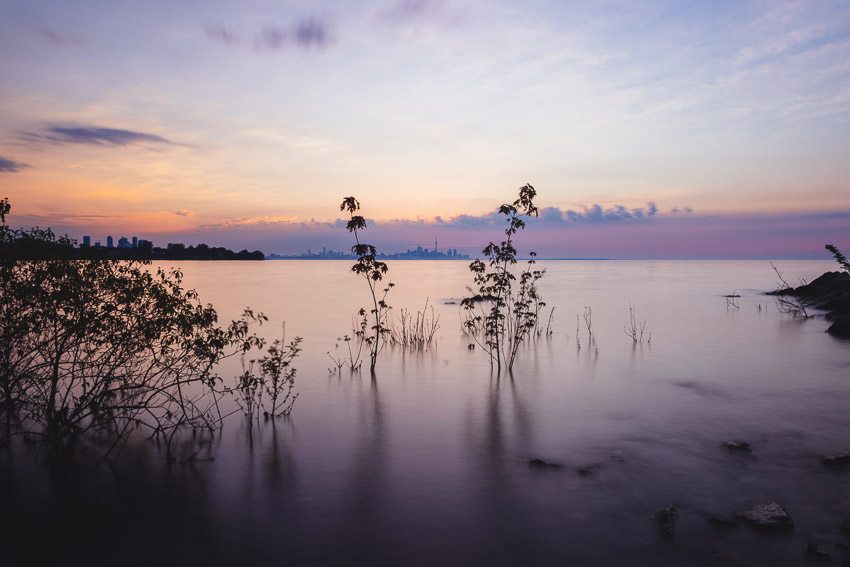 Though Kumabe often shoots the same spots at the same time of day, the results vary immensely. “The best part about going back over and over again is there’s always something different that I find,” he says. He also makes sure to document iconic moments, like a cold snap, extreme weather, or, in this case, last spring’s floods, when the shores of Lake Ontario crept to memorably high levels. “Because of the flood, it made the shot extra moody,” he says. “That morning was so still I was able to get long exposure without the plants moving.” 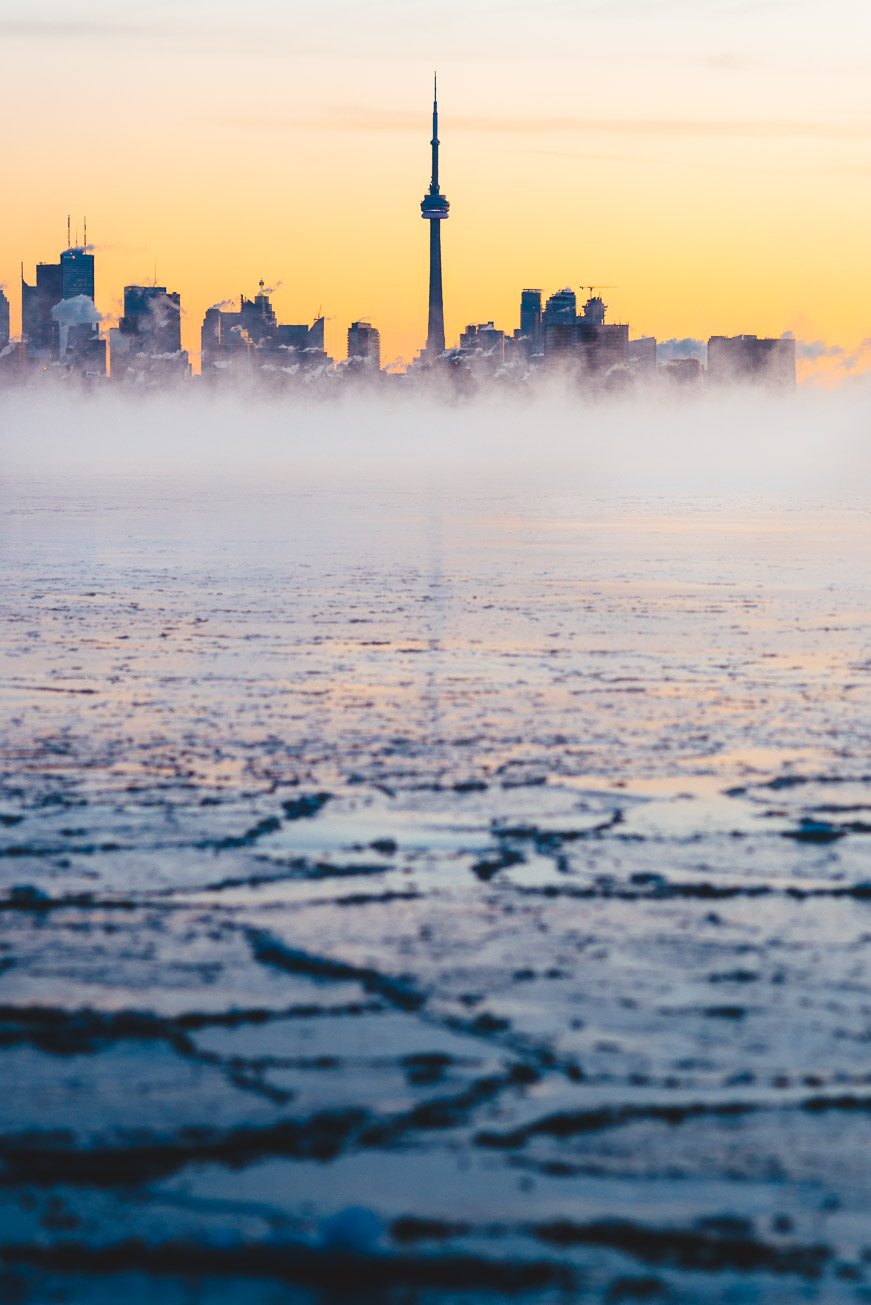 This scene from Humber Bay Park captures the morning of December 31, 2017, when temperatures were unforgivingly wicked. “That was one of the more memorable sunrises of the year,” he says, owing to a -31-degree forecast, the icy lake and, of course, the hazy fog. “A lot of people like the fog. They find it moody and atmospheric,” he adds. This winter, Kumabe made a point to go out on New Year’s Eve and New Year’s Day, weather be damned.