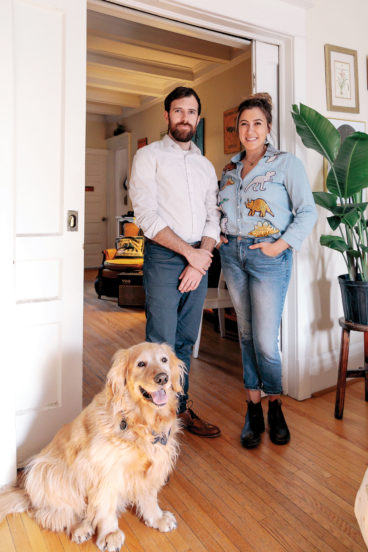 The Year of Living Nomadically

My relationship had gone to ashes, my apartment to my ex, and I was broke. Serial house-sitting became my salvation

Back in 2015, my girlfriend and I graduated from Sheridan College and found a charming apartment in a high-rise near Gerrard Street and the Don River. We loved the area and spent our weekends exploring Cabbagetown and Regent Park on our rickety bicycles. Six months later, our savings weren’t looking great and, unfortunately, neither was our relationship. I was suddenly single, lonely and lost in a new city. As a 23-year-old freelance illustrator earning less than $20,000 a year at the time, I knew I couldn’t afford a one-bedroom condo—or even a basement apartment—on my own, and I didn’t want to do the roommate thing. I was stuck.

Soon after, I found myself at a Swiss Chalet in my hometown of Hamilton, being consoled by my grandmother over a quarter chicken dark. She mentioned her snowbird friends who wintered in Florida, and I started thinking there was probably a market for vacationing homeowners who needed someone to keep pets company, pipes from freezing and plants from dying. I found a company called HouseCarers that matched vacationing homeowners with prospective sitters. Soon I had my first client. Kathryn was 27, funny and creative and in need of someone to look after her High Park apartment and retriever–cocker spaniel mix, River, during her upcoming 10-day trip to Belize.

We hit it off. After she gave me a tour of the place, I sat down at her piano and began playing Nina Simone’s “Feeling Good”; Kathryn started singing along excellently. We talked and discovered we both had an interest in rock climbing and short films. She gave me some instructions, and I left—a little smitten and happy that my plan seemed to be working.

Overall, the job went smoothly. River and I intimidated High Park’s squirrels twice a day and, at night, slept soundly. The experience felt peculiar at first. On the fridge were photos of people unfamiliar to me, and on the walls, framed quotes I had never heard before. Nevertheless, after a few days exploring the area, I began to settle in and grew more comfortable in my short-term home and long-term city.

Feeling encouraged, I posted on Facebook about my new line of work. I made flyers, scoured the HouseCarers website and in short order had booked myself almost solidly for the next seven months. My stays varied from a few days to a few weeks. I looked after everything from freshly renovated million-dollar houses and beautiful Victorian walk-ups to 200-square-foot bachelor units and, once, a hoarder’s hellscape. I was grateful for all of them.

My duties consisted mainly of feeding pets, walking dogs, taking in mail and watering plants. With each new stay, I was feeling a little less stressed about money and a lot more familiar with the city. Where I used to google places to go, I was now giving recommendations to friends. Where I used to worry about the first of the month, I was now thinking about longer-term possibilities like saving up to someday own property, here or elsewhere.

I hadn’t been charging a fee—room and board were my payment. But I soon realized the extent to which people valued my services. At one initial meeting, the homeowner said: “Thank you so, so much, this is such a great help. Is $300 for the week okay?” Why yes, that would do. Ten months after I started, I began charging between $35 and $50 per day. To my surprise, clients were fine with it. Soon I was making as much as $1,500 per month, saving roughly $1,600 on rent and building up a healthy freelance illustration business. I was also saving on Internet fees, utilities, coffee and sometimes food. My principal expenses were motorcycle insurance (I upgraded from that rickety bicycle), gas, groceries and student loan payments.

The job came with its challenges. At one cockroach-ridden Parkdale apartment, I looked after three cats and two 19-year-old chihuahuas. The dogs had coughs, wonky legs, gastrointestinal problems and their own daily pill organizers. They were strictly vegetarian and had to be hand-fed wet food. I tended to them like they were my own feeble newborns; as thanks, they barfed on my blue suede shoes, twice. At a Victorian walk-up on Queen West, a pipe in the kitchen ceiling burst. At a Liberty Village condo, a pet bunny’s oozing eye infection ended in a $200 trip to the vet. And in Little Portugal, a neighbour backed his truck into my motorcycle, leaving it scratched and dented.

I’d reduced my worldly possessions to what I could cram into a backpack—one pair of pants, a few T-shirts from Chinatown, my laptop and sketchbook and a beard trimmer. When I was invited on a camping trip, I had to buy a sleeping bag and sell it three days later for lack of a place to store it. The costs were certainly outweighed by the benefits, but the constant moving about was exhausting.

By late 2017—two years into my life as a nomad—I had established a network of friends and become familiar with at least 40 of Toronto’s neighbourhoods. But I was also coveting something more permanent. When Kathryn—the first tenant I house-sat for, the one who sang Nina Simone so beautifully—returned from Belize, we went on a date, to a Legoland adult night (yes, it’s a thing). I must have impressed her with my building-block skills because in March 2018, I moved in with her to that very same High Park apartment. Now we share River, and I live life on the other side, seeking out pet-sitters when we go travelling. I saved a lot of money during my two and a half years on the job. I became an expert on Toronto. I grew to care about each animal I looked after—even those geriatric chihuahuas. But falling in love? That’s something I never expected.