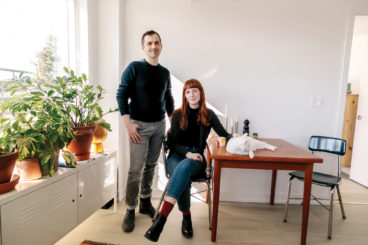 Two young professionals needed a bit of help to buy a condo. Then they found Options for Homes, a non-profit that provides no-interest loans

The Owners: Patrick Kroetsch, 29, a prop maker, and Jennifer Tweedie, 30, a content strategist
The Place: A 700-square-foot two-bedroom, two-bathroom condo near Main and Danforth
The Price: $383,000

Patrick kroetsch and Jennifer Tweedie desperately wanted out of their second-floor rental in Christie Pits. Roaches, crumbling plaster and a difficult landlord were testing their patience. But Kroetsch was freelancing and Tweedie worked as a server, and the $1,350 rent made sense for their budget. Then Kroetsch’s brother told him about Options For Homes, a non-profit Toronto developer that keeps costs low by forgoing amenities like pools and gyms. The organization provides buyers with up to 15 per cent of the down payment, so buyers need only save as little as five per cent in order to put forward 20 per cent. When the owners sell, they must pay back the loan at 10 or 15 per cent (or whatever their loaned percentage was) of the new, presumably appreciated value. That profit goes toward future loans and developments. Kroetsch’s brother had bought an Options for Homes condo and was thrilled with how it turned out.

Kroetsch and Tweedie signed up for a $370,745 two-bedroom unit in a development near Danforth and Main. The area isn’t trendy, but it’s on the subway line, within 10 kilometres of the CN Tower and a short walk to the Taylor Creek Trail. They added a $35,000 parking spot and $11,000 in custom finishes. On signing, they put down $20,000, and Options added $48,000, bringing the total down payment to nearly 18 per cent. The couple stayed in their Christie Pits rental while awaiting construction and managed to save roughly $1,500 per paycheque between them. By the time they moved in last December, they had saved an additional $50,000, bringing their total down payment to nearly $130,000, which allowed them to avoid CMHC fees. Now they pay just $2,100 a month—$1,700 in mortgage payments, $100 in utilities and $300 in condo maintenance fees.

They love the unit. The neighbourhood isn’t as desirable as Christie Pits, but they’re optimistic it someday will be. “We would have probably spent an extra $200,000 to live closer to where we wanted for the same amount of space or less,” says Tweedie. “But it’s cheaper for us to own here than it is to rent.” They don’t plan to sell any time soon, at least not until they outgrow the space, says Kroetsch, who proposed to Tweedie on Christmas morning, just after they moved in.