In 2013, Lisa saw an ad for a preconstruction condo development near Casa Loma. The building was near the subway and U of T, so a tiny studio apartment (complete with parking and a storage locker) seemed as though it would be a good investment. She made a deposit, intending to rent the place out once it was ready for occupation.

Just as the unit was approaching completion earlier this year, though, she realized she could make twice as much money if she moved into the studio and rented out her existing home, a one-bedroom, 722-square-foot Yorkville condo. She shed two heavy-duty garbage bags worth of books, heaps of hangers and boxes upon boxes of tchotchkes. “I wanted to live very minimally,” she says. Any remaining overflow went to her Georgian Bay cottage. When she was done purging, she and Ben, her Shih Tzu, decamped to the studio, half the size of her original pad.

Since moving in, Lisa has continued to keep clutter to a minimum. Anything that’s collecting dust gets donated, which means her pied-à-terre is almost hotel-room–like in its sparseness. A photo of her family at Highclere Castle and a rabbit plushy Lisa inherited from her mom are two of the few remaining personal touches: 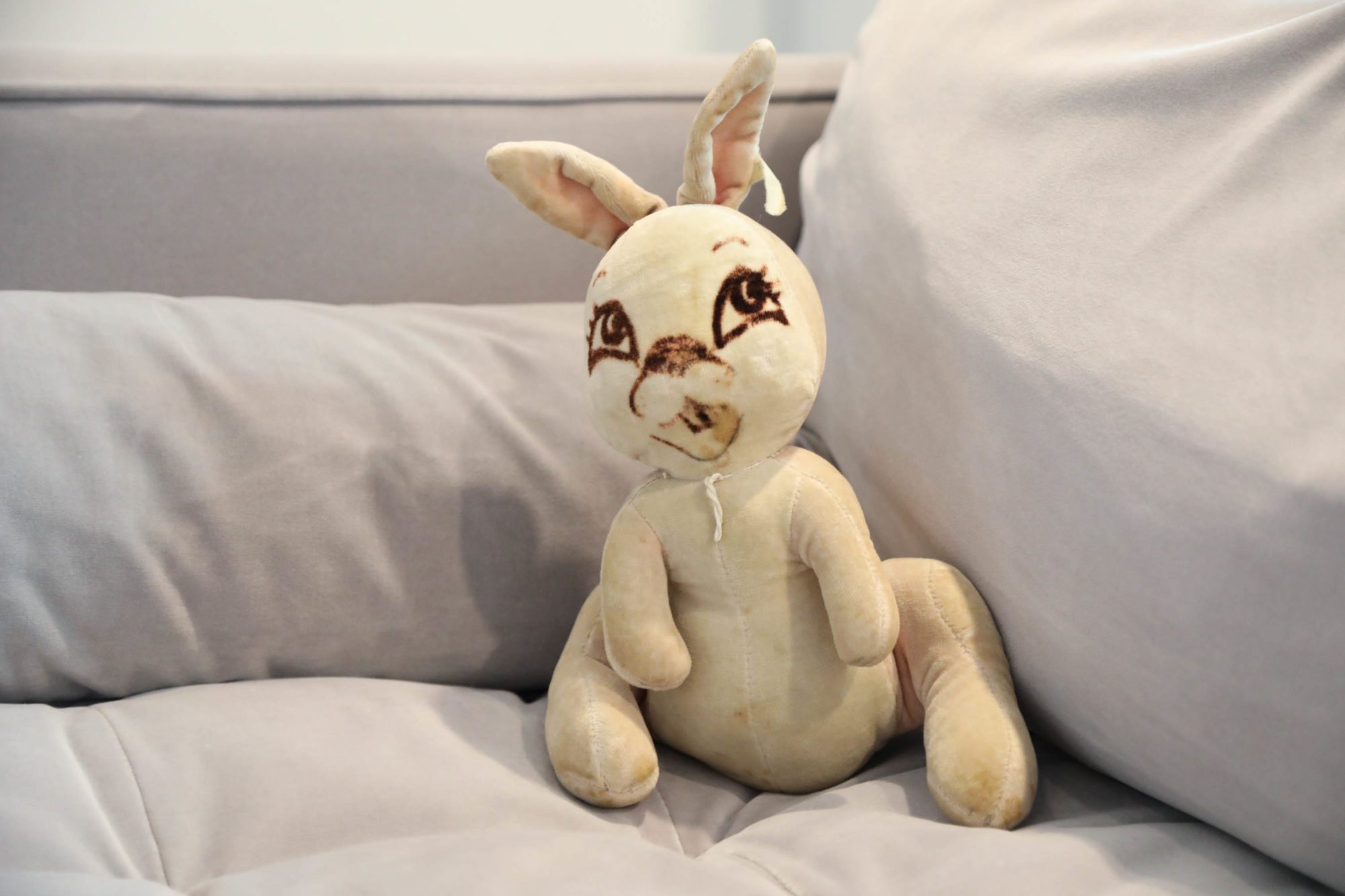 Lisa opted for a light, neutral colour palette and kept the same grey flooring throughout, because she thought breaking up the space with different colour schemes would make it feel smaller. Her white, high-gloss cabinetry bounces light throughout the room, making the space seem bright and airy: 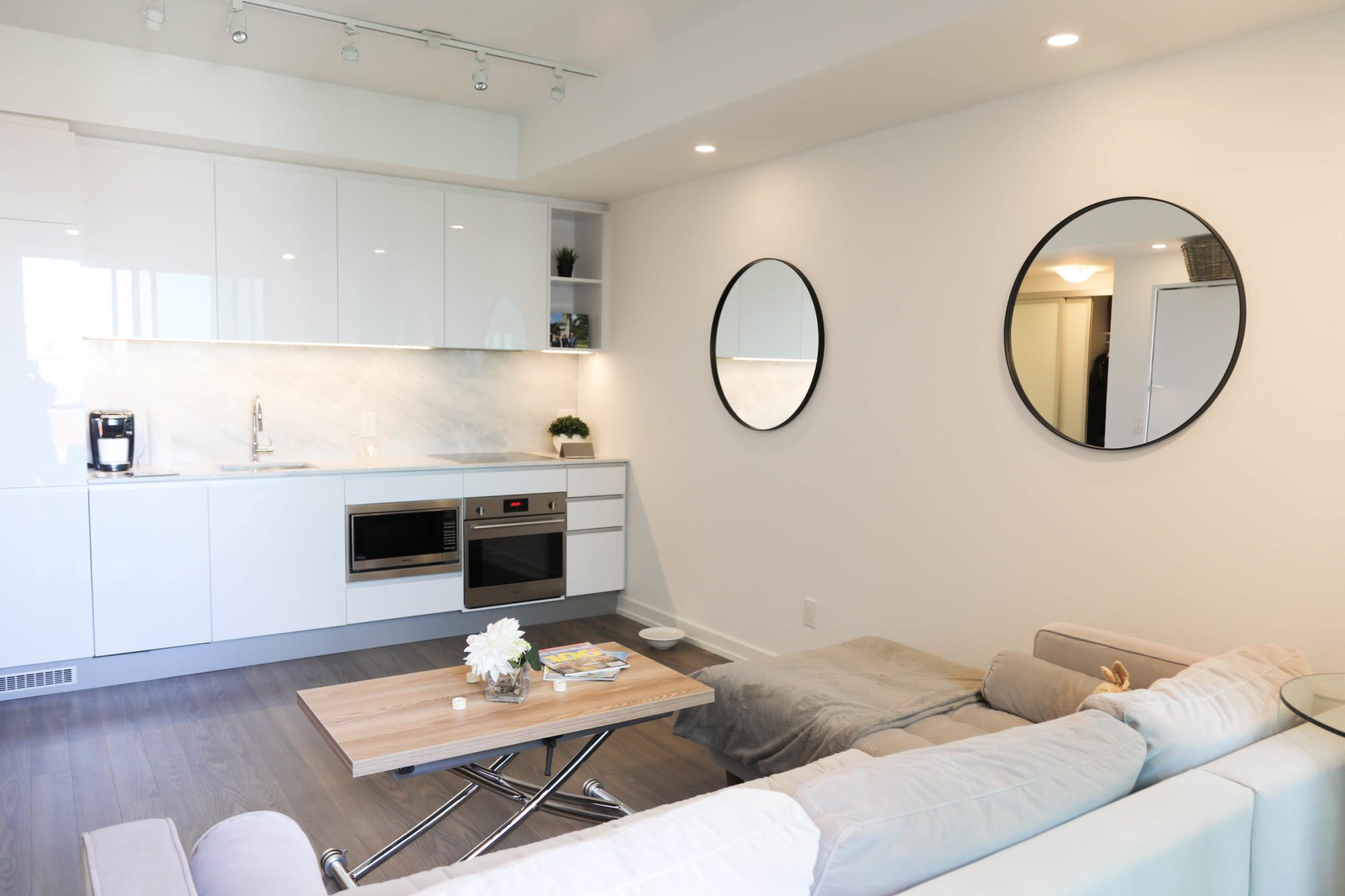 To make the room seem less austere, she added a few rustic touches, like these woven baskets, which double as storage for her bedding during the day. The Murphy bed folds up into its cabinet when she’s not using it: 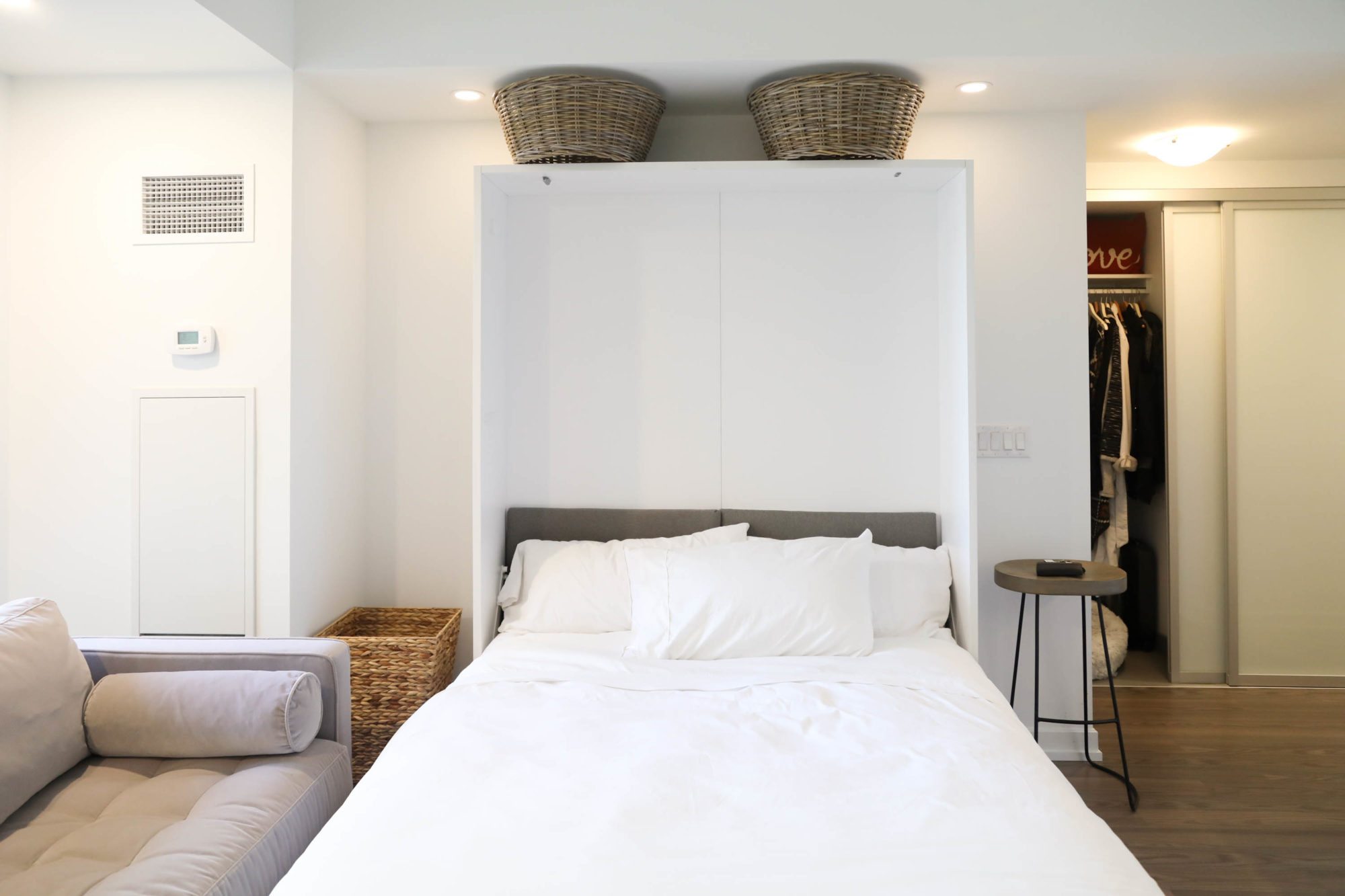 Lisa regrets buying this couch, because it’s slightly too big for the unit. It blocks access to the petite balcony, but moving it away from the door would obstruct the bed. Even so, it’s a perfect place to lounge while she works from home: 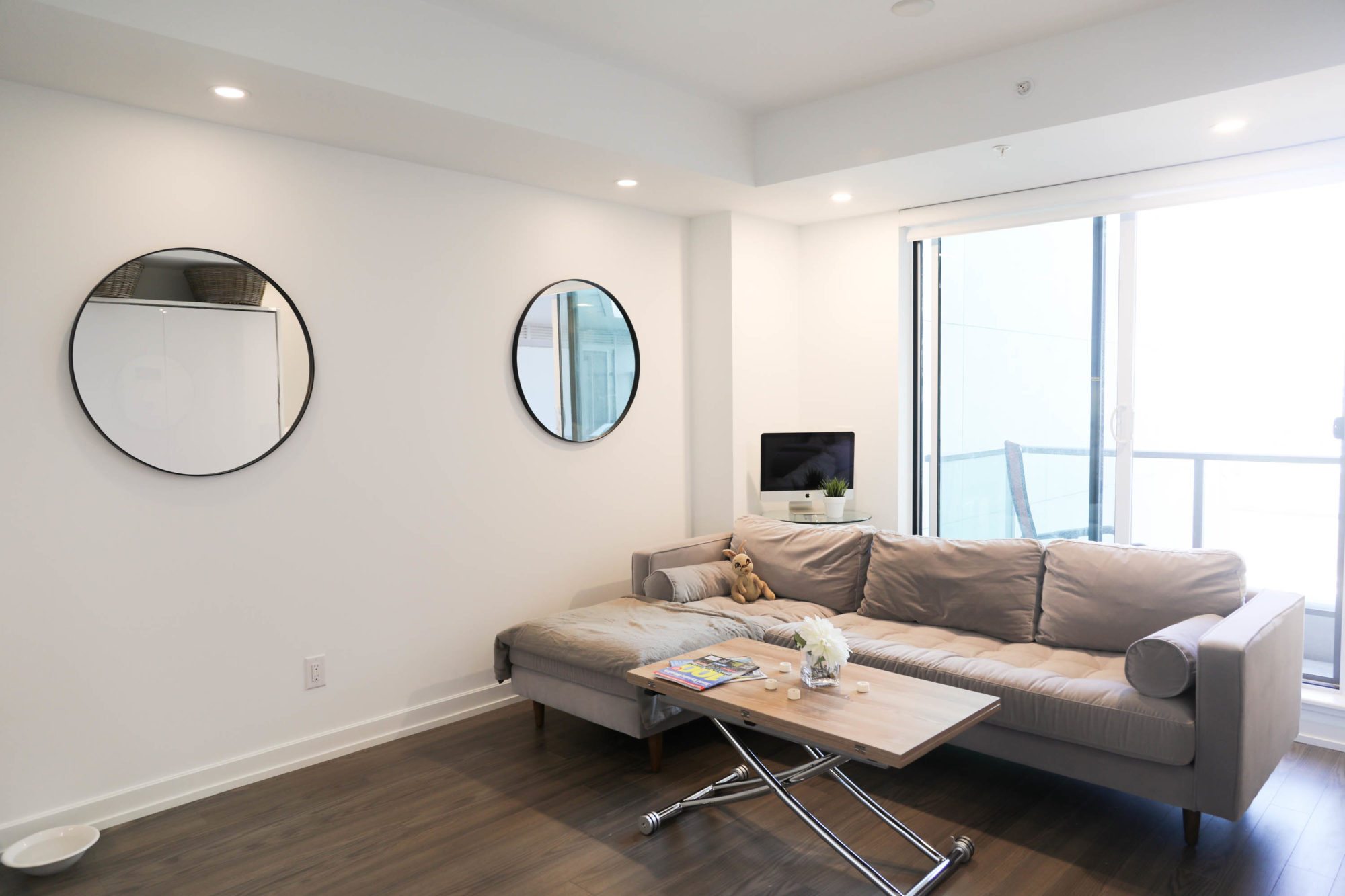 Lisa’s selling agent tried to talk her out of swapping out the bathtub for a glassed-in shower. “He told me tubs had better resale value for families,” Lisa says. “I asked him if he knew who his demographic was.” 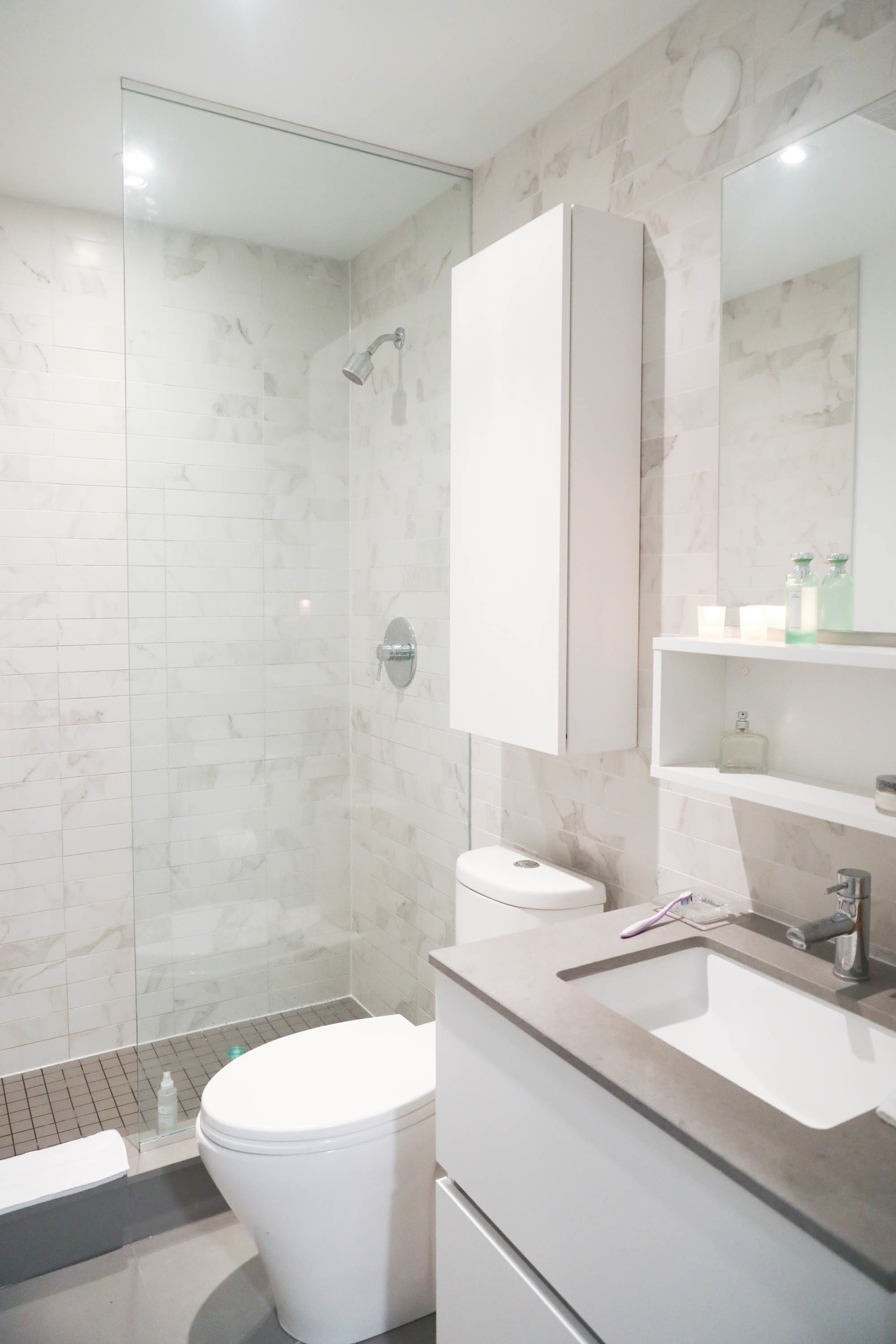 For now, Lisa is happy here, in part because she has her cottage to escape to on weekends. Much of her family is spread out across the continent, and she wishes she could host them in Toronto when they visit. She hasn’t decided what her next move will be. “It all depends on where the market goes,” she says.