By Caroline Aksich | Photography By Brittany Carmichael |  May 14, 2018 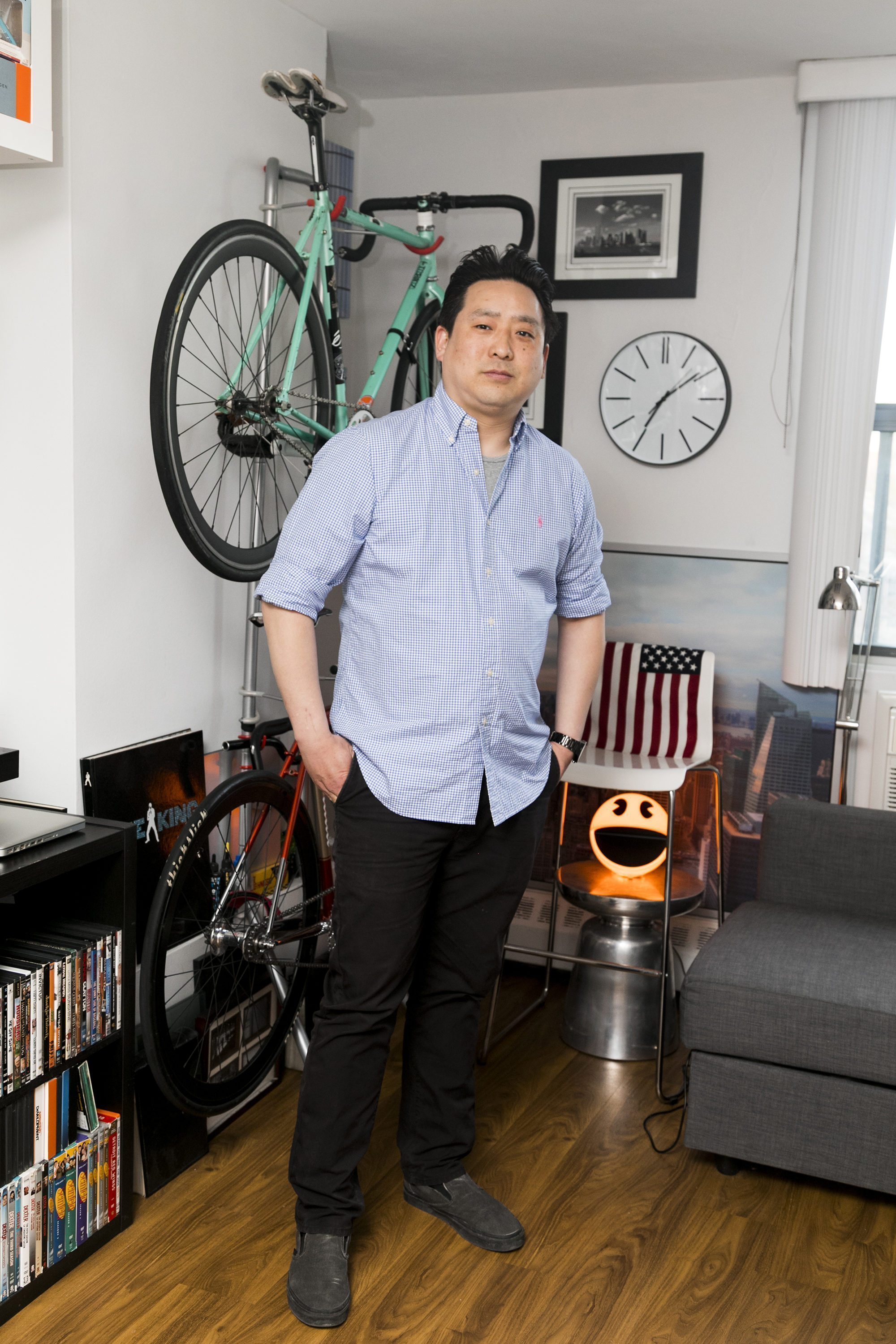 Five years ago, Andrew was renting a one-bedroom in Regent Park. The floors were buckling, the roof was leaking and someone had brought bedbugs into building. He decided to flee.

He found a charming 900-square-foot place and replaced all his furniture to avoid bringing any bugs along. Then, a few weeks after into moving in, he started getting bites. He apologized to his new landlord and agreed to move out immediately, giving him only a week to find a new home.

And that’s when he found his current pad, a studio apartment smaller than a budget hotel room. But it wasn’t all bad: the rent was cheap, it wasn’t a basement, the appliances were new and the location was right (Andrew’s an all-season cyclist, and his work is a short ride away). Before moving in, he purged all his furniture for a second time and thoroughly heat treated all his remaining possessions to kill off any six-legged hitchhikers.

Instead of buying a regular bed, he got this multi-functional couch from Ikea. It has some internal storage, where he keeps his extra linens and sports equipment, and the seat folds out into a double bed. It’s not the most comfortable sleeping surface, but Andrew makes do. On the wall, one of his three bikes is suspended with an Ikea picture shelf and an MEC bike hanger: 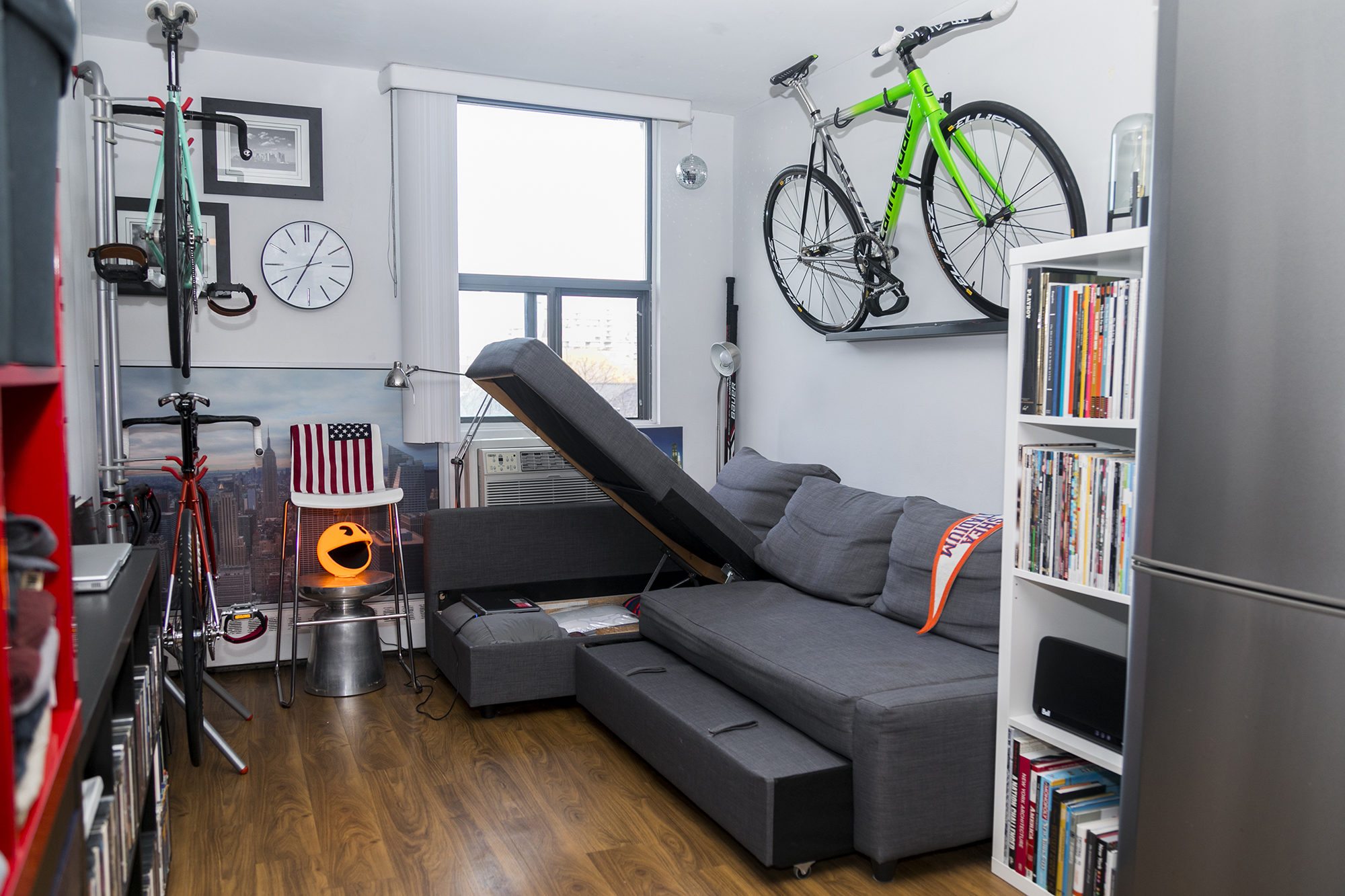 He mounted this bookcase to the wall and positioned it horizontally so that it can double as a shoe rack. “If I hadn’t used the vertical space, this apartment would be an absolute nightmare,” he says. 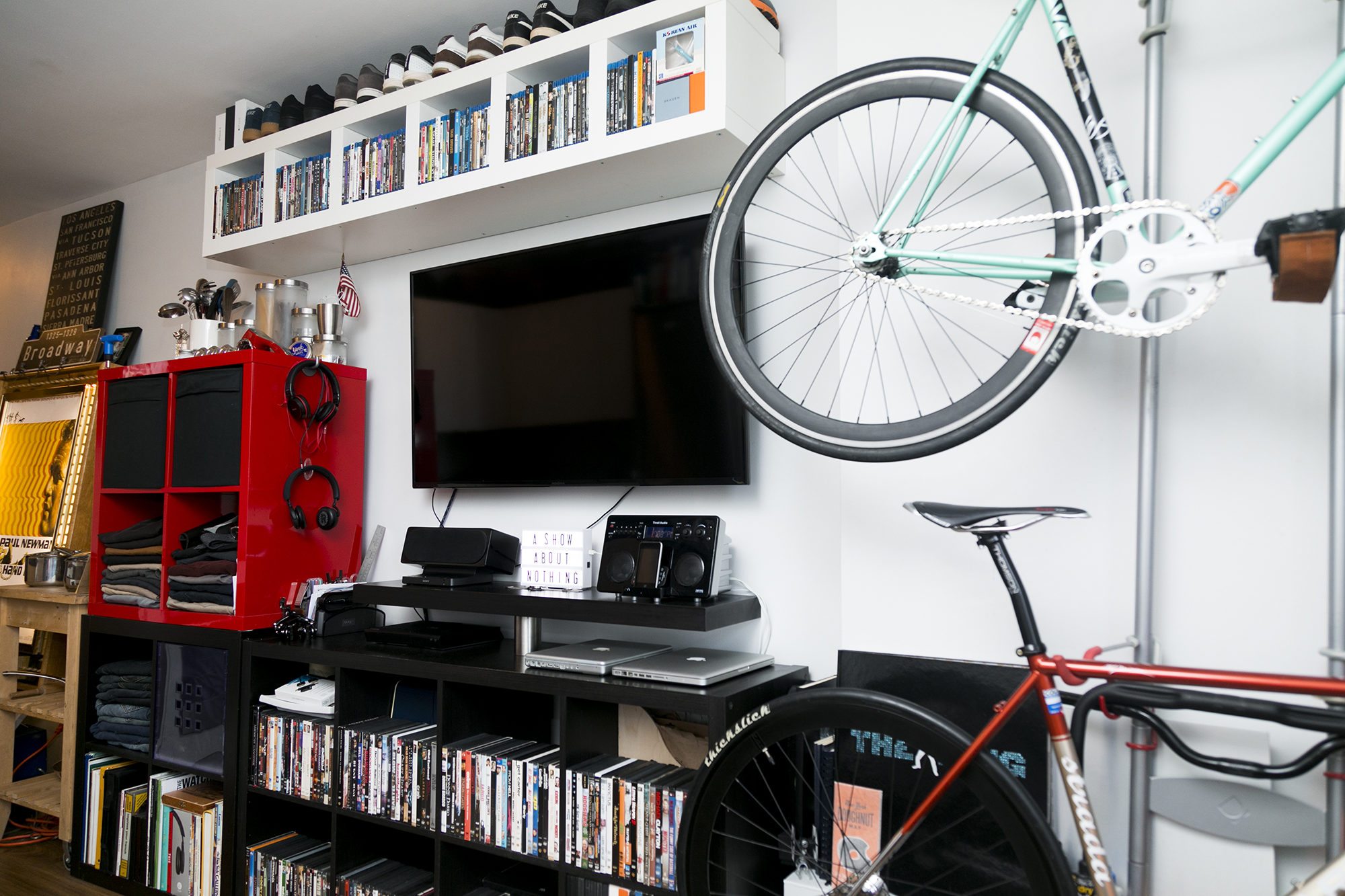 Although this movie poster marquee is far too large for the apartment, Andrew refuses to part with it. He found it on garbage day right after Blockbuster went bankrupt. The Cool Hand Luke poster was a later addition. Andrew chose it because it’s what’s on the wall in Edward Norton’s apartment in the film 25th Hour: 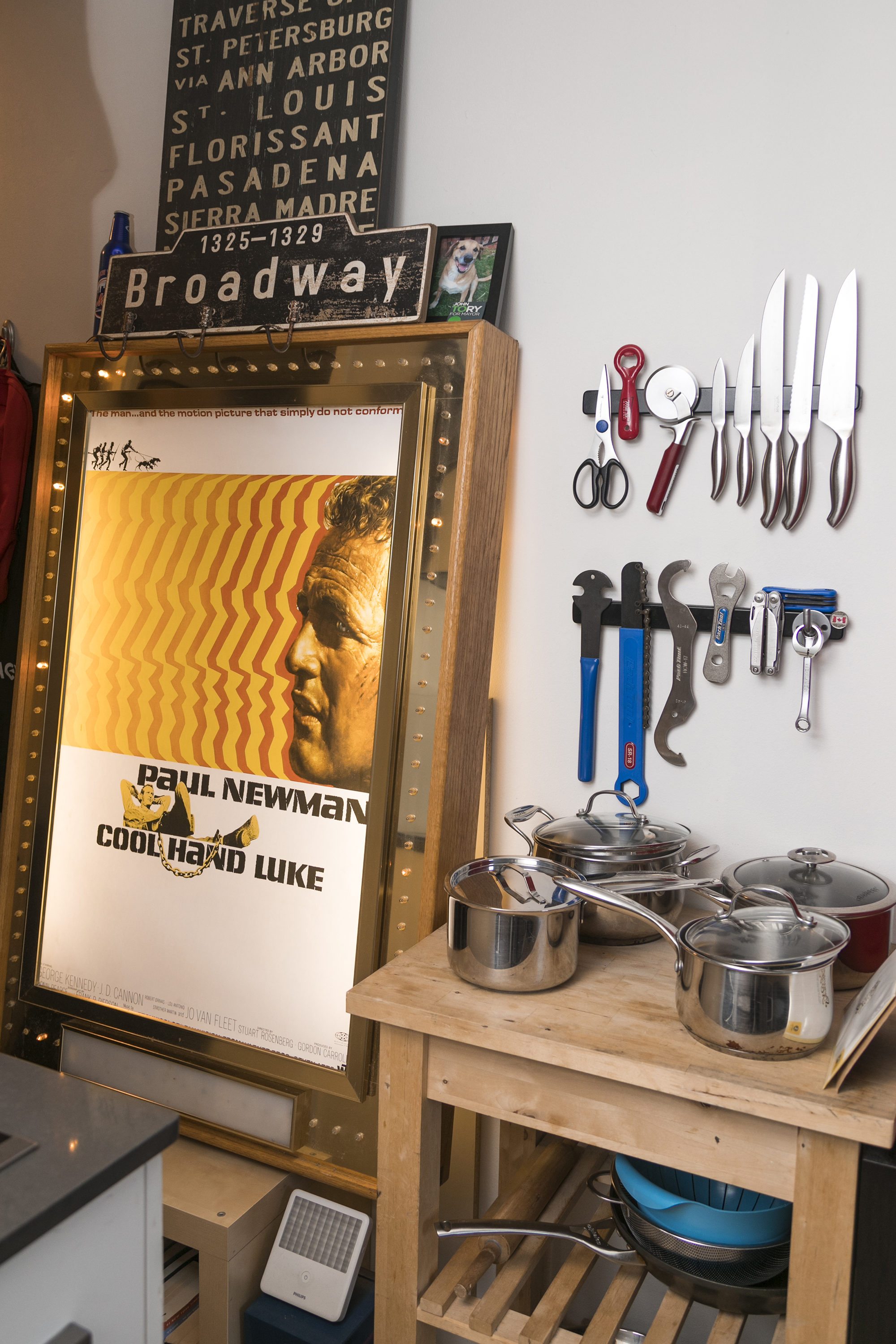 Andrew is a big fan of ambient lighting. When he wants to change the feel of the room, he’ll turn off the overhead light and turn on the marquee and this Pac-Man lamp: 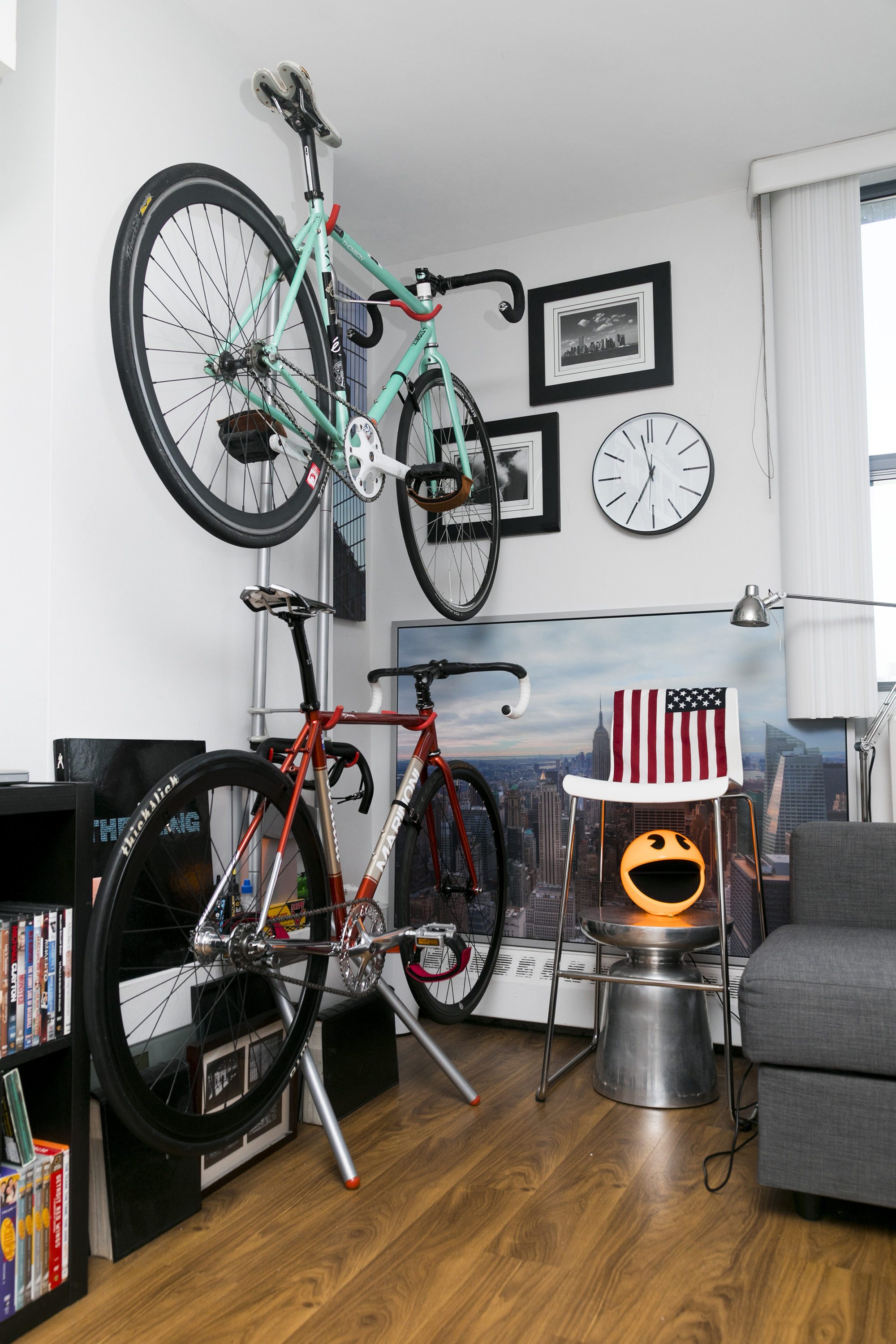 The kitchen takes up a corner of the room. It’s so small that a single meal makes a mess. “You have to be vigilant with cleaning,” Andrew says. 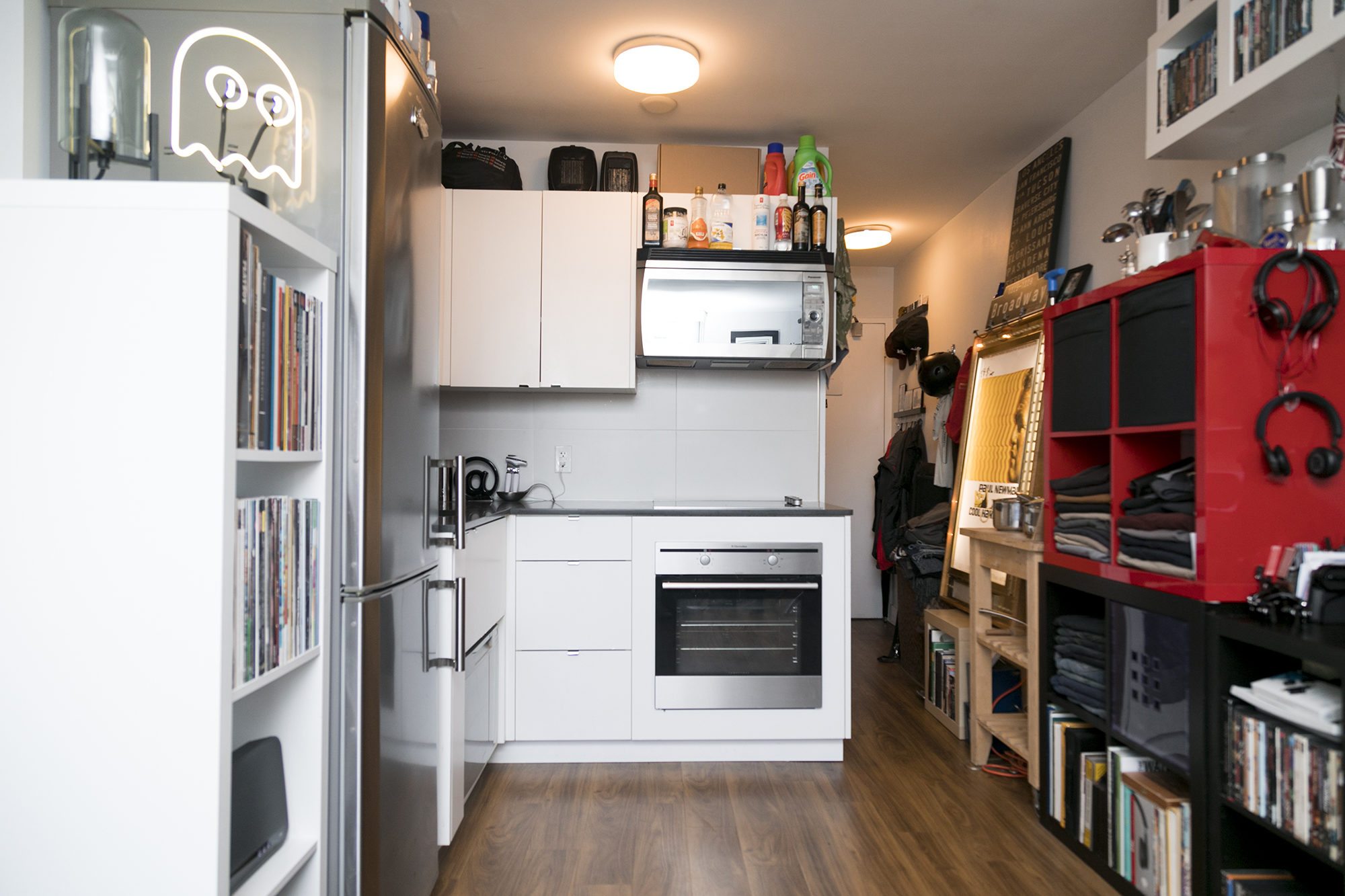 When he moved in, Andrew didn’t think he’d still be here five years later. Even so, he has grown to like his minuscule apartment. He thinks he’ll probably stay until he’s ready to move in with a girlfriend. “The market has moved so far now that I couldn’t afford to rent the same place today,” he says. Studios in his building rent for upwards of $1,500 per month now.