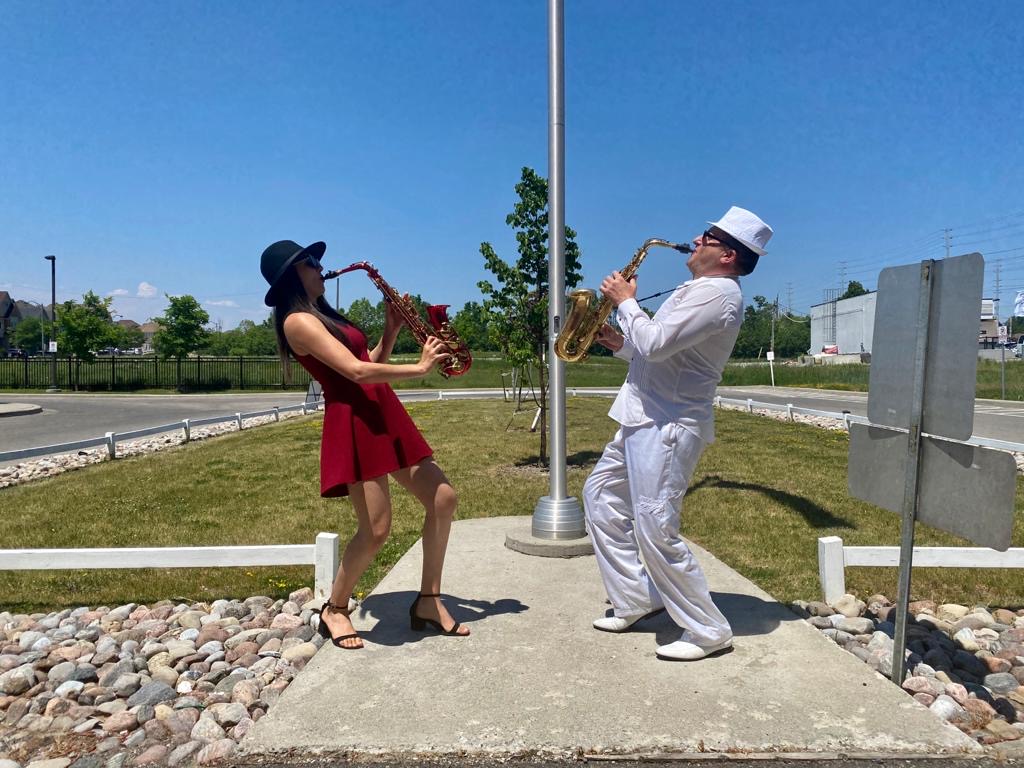 Ivgeni Kriger moved to from Israel to Toronto four years ago, and immediately went about combining his two passions—music and nursing—to create Musical Retirement, a business where he brings interactive musical performances to Toronto seniors’ homes. Since the pandemic started, he’s been playing his saxophone outside these facilities to bring some joy to locked-down residents. He told us how his performances come together.

As told to Isabel B. Slone

“I’m a jazz saxophonist, and music has always been my life. Growing up in Russia, I wanted to attend a post-secondary musical program, but none of them would accept me because I was Jewish. I knew I had to move to a country where I belong, and so in 1990, when I was 18, I moved to Israel. During my service as an instructor in the Israeli army, I realized I love working with people. That’s when I got the idea to go to nursing school; I became a nurse in 1998. In Israel, I also met Lydmila, the woman who would become my wife, and we went on to have three daughters: Anat, Karin and Hadar. Then, one day in 2006, I was driving to work under the sirens and rockets of the Second Lebanon War. I realized Israel wasn’t a safe country for my family. It took many years, but eventually we arrived in Toronto in 2016. I was licensed as a registered nurse in Ontario, and I now work at two hospitals—Mount Sinai and CAMH.

“When I immigrated to Canada, I combined my two main interests—music and nursing—to form Musical Retirement, a business that aims to help improve seniors’ lives through music. It all comes back to my grandmother. She died when I was 16, and was a huge figure in my life. When I ask myself what I can do for those seniors, it always starts with what I’d want to do for my grandma. Since 2016, I’ve been visiting retirement and nursing homes and leading what I call “interactive musical meetings.” Music is not just for passive listening—it’s an activity. I want to be able to change someone’s life, so I involve seniors in the performances. I play classic songs they know, by artists like Elvis Presley and Stevie Wonder, while also exposing them to traditional Italian, Arabic, Jewish, Spanish and Russian traditional songs. I even wrote a book called Musical Retirement: Enjoy Your Senior Years, about how music can bring happiness to seniors in their everyday lives. I work with more than 100 long-term care and retirement homes in Toronto, including ones owned by Chartwell and Revera.

“I can’t be in five places at once, so I’ve hired more musicians who share my mission about creating great experiences for seniors. The first person I brought on was my daughter Anat Kriger, who is a professional actress and singer. It’s not her main job—she has her own entertainment company for kids called Freckles World—but with her I am able to bring cover more places and help more seniors. I do this on top of my full-time job. Sometimes I’ll work a night shift at the hospital, come home and sleep three or four hours, then have a performance at 3 p.m. The music wakes me up, and I jump from my bed. When I play, it’s not just performance and activity. It’s my personal therapy as well.

“Before the coronavirus, I’d bring instruments to the homes so the seniors could play along with me. I’d coach them through guided exercises to get them moving their hands and feet to the music. Sometimes, when I’ve finish a performance, I’ve had activity managers tell me they saw people who normally don’t move standing up or dancing in their chairs. After my performances, the seniors are more joyful. Residents start feeling happy because Ivgeni helps them feel happy.

“When Covid came, I saw it as an opportunity to do something new. I’d never thought to play outside before, but that’s exactly what I started doing. In mid-April, I did my first outside show at Amica Bayview Gardens. I played ‘The Last Waltz’ by Shostakovich on my saxophone in the parking lot, and residents came outside to dance and sway along to the music. One woman even pretended she was conducting the song. Every residence is different: some have beautiful windows where seniors can come and watch my performance from inside, and in others, the seniors are permitted to come out to listen. I want to give as many people as possible the chance to experience my music, so I play half an hour on each side of the building. 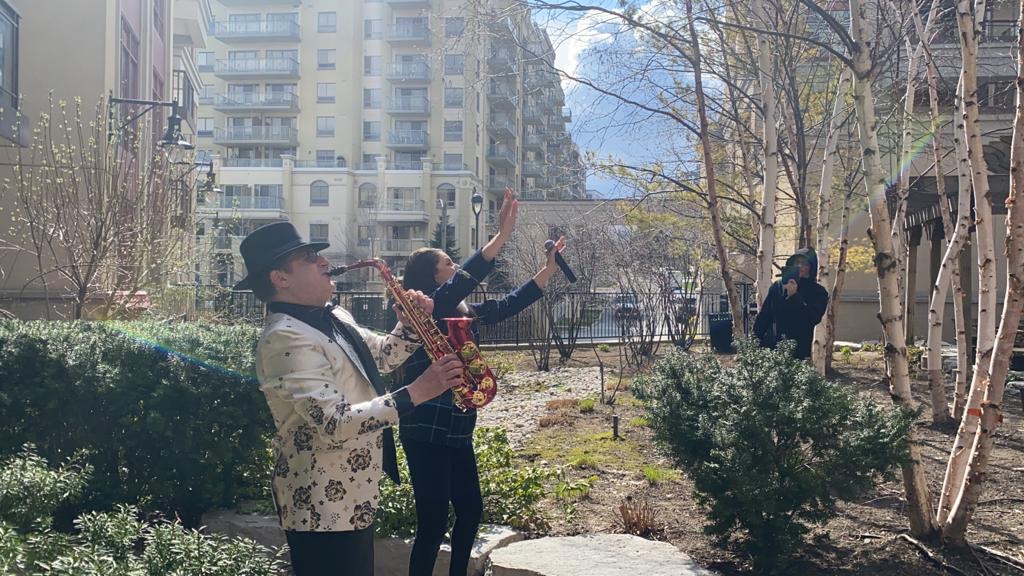 “I start every performance by asking, ‘Would you like to feel happier?’ They call back, ‘Yes!’ I say, ‘I can’t hear you?’ They respond even louder: ‘Yes!’ Then I teach them several exercises, very easy, which can help them feel happier fast. I start with face exercises, asking them to shake out their cheeks. I explain how it relaxes the muscles on our face so we can smile faster. If you go around smiling, then everybody will smile back. Smiles connect smiles.

“I usually start out with ‘Hallelujah’ by Leonard Cohen, which is about feelings. I say, “It’s important to show our feelings, but sometimes we can’t find the words.” So I ask them to describe their feelings through their hands. Next I tell them I want to check their legs, and I start playing songs by Elvis Presley. Finally, I say, ‘I’m going to check your body!’ and I try to get everybody moving. I joke that after my performances they won’t need to go for the doctor for a few months because I’ve already checked their hands, legs, and body.

“In the second wave, it’s become a little bit more challenging because many homes are keeping residents inside. Sometimes I can see residents moving their legs on the balcony. I try to imagine they are dancing while I play. Even some people with dementia will hear my music and start singing along. The songs I play bring up memories from the past.

“In mid-October, I brought my saxophone to the Vermont Square long-term care home, where there was recently a Covid outbreak and the occupants were on lockdown. I played my jazz saxophone outside while the residents stayed in their rooms with their windows opened and listened to my performance. Although I could not see the residents, the activity manager told me that throughout the rest of the afternoon, both residents and staff kept telling her how great it was in the units, and how the performance made them feel that things would get better soon. To know that I’ve made the seniors happy is more important to me than the money they pay me.”