Why are Toronto chefs covered in so much ink? Here, the stories behind their tattoos, in their own words

Toronto’s chefs and bartenders are a tatted-up bunch. They’ve got letters on their knuckles, elaborate illustrations under their sleeves and inky odes to their restaurants on just about every bare patch of skin. Toronto photographer Brilynn Ferguson documents those tattoos and the stories behind them in her ongoing series Industry Ink.

Over the past four years, she’s shot 300 portraits for the project and developed some “unscientific theories” about the connection between tattoos and restaurant culture. “I think it comes down to two things,” she says. “First, chefs have only recently come into the spotlight. For a long time, they weren’t seen—they worked in the kitchen, hidden away in the back. So, even when tattoos were more taboo, restaurants were more accepting of them and more likely to hire someone with visible tattoos.” The second reason, she says, is that chefs are by nature creative people. “They come up with new dishes and pairings all the time,” she says. “Food is consumable art, and tattoos are wearable art. They’re both forms of creative expression.”

Here, 20 of the chefs and bartenders featured in Industry Ink decode their tattoos. 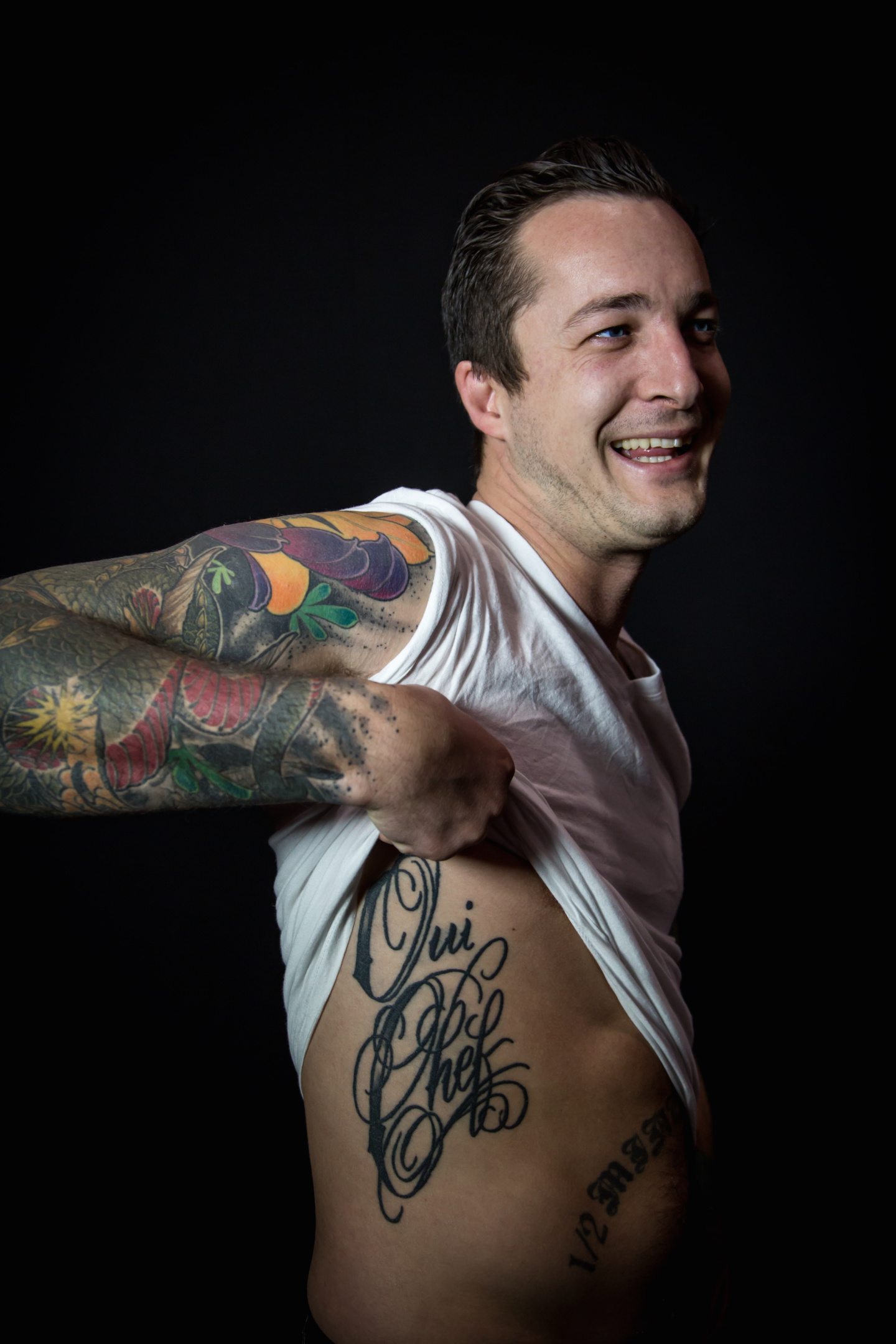 “My friend booked a last-minute tattoo appointment for me, and originally I was going to get something else. I ended up with ‘Oui chef,’ because I hear it 20 times a day and thought it was a fitting statement.” 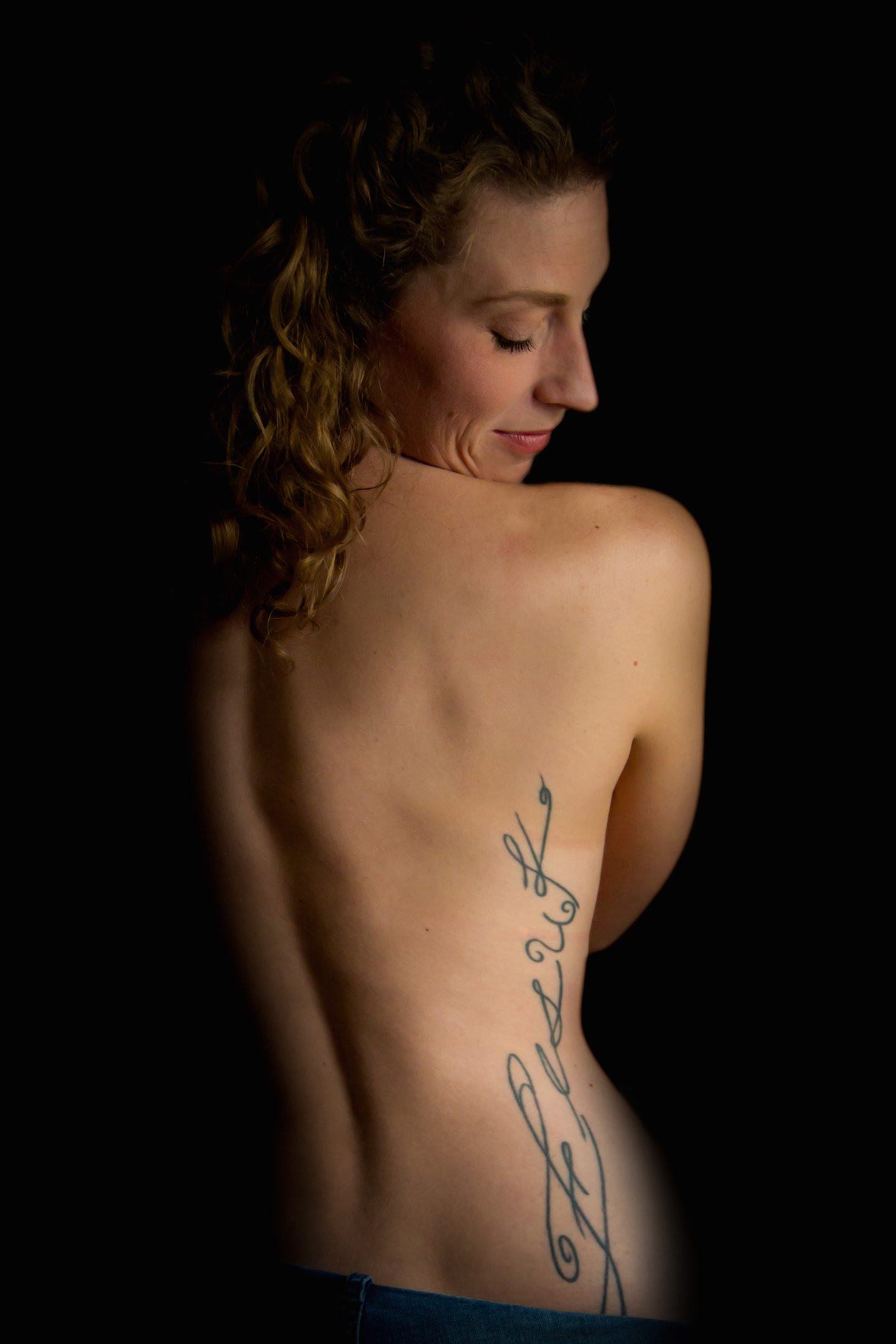 “My brother and I both have our last name tattooed on our sides. We spelled it the traditional Ukrainian way: Fesuk. It was changed to Feswick when my family moved to Canada because Fesuk was considered a ‘gypsy’ name.” 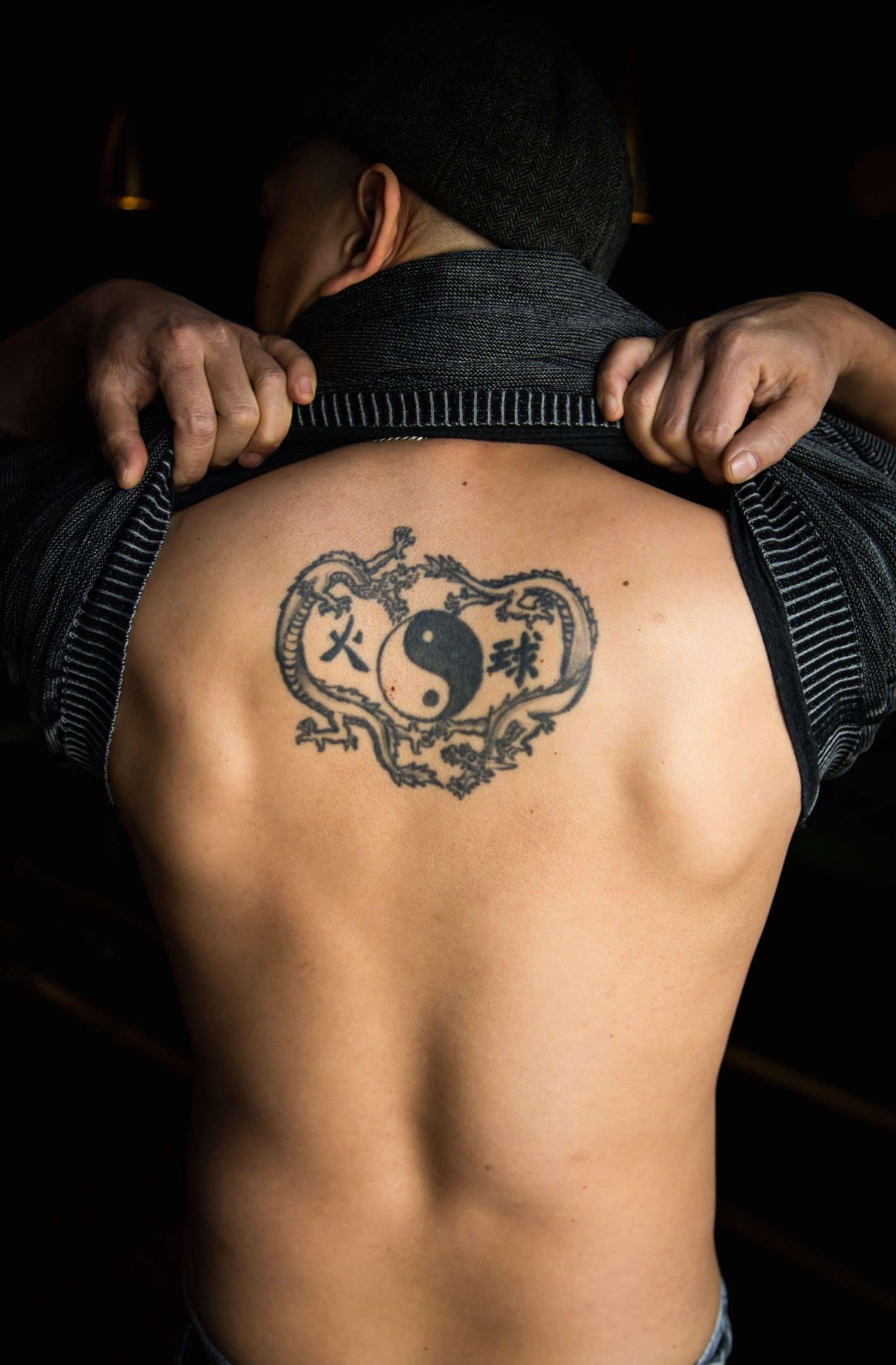 “I wanted to go to art school but didn’t get in. I designed part of my tattoo. I always thought I’d get a sleeve but then everyone started getting them….” 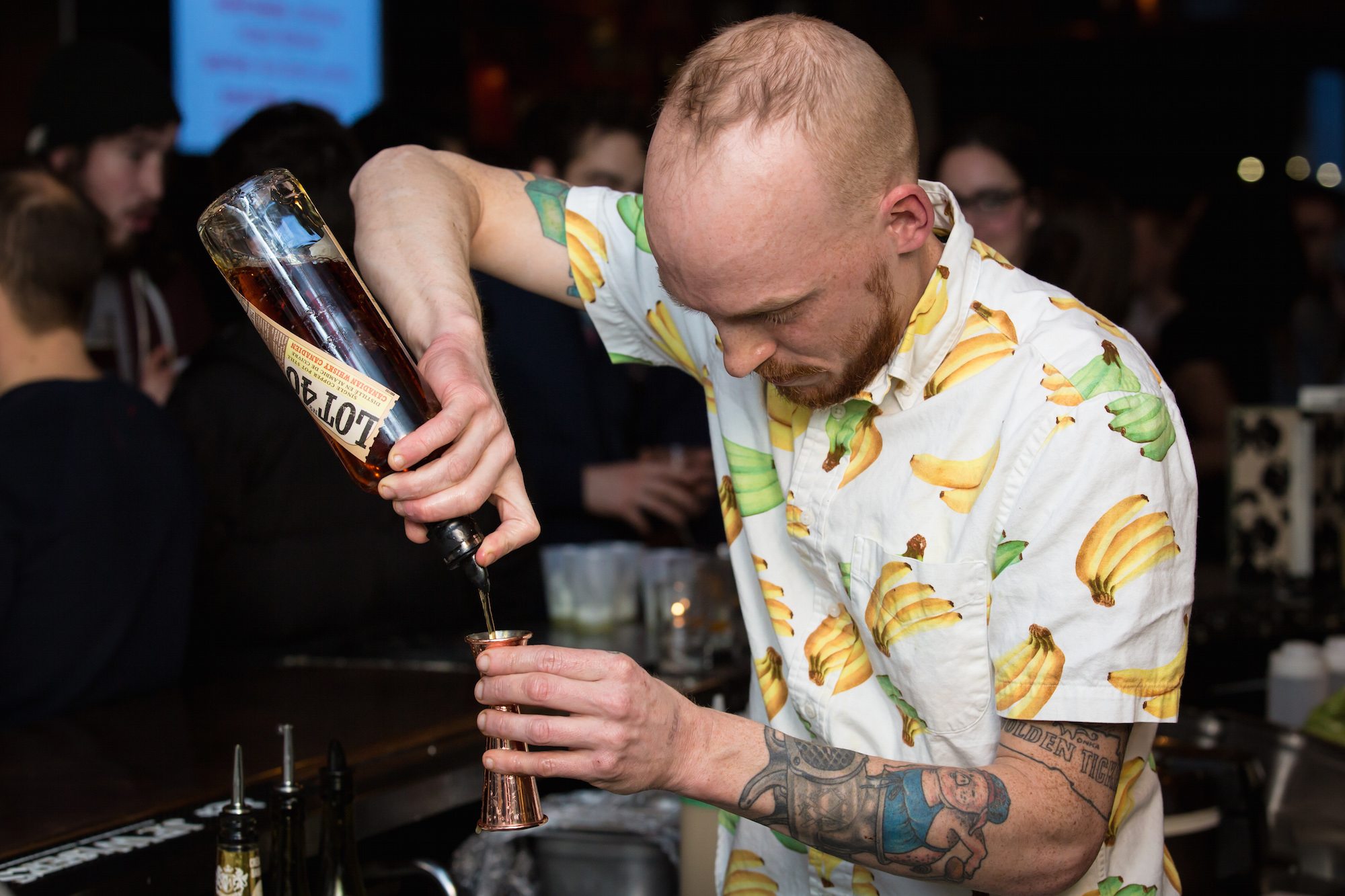 “I have a Willy Wonka–themed half sleeve, and that’s the golden ticket peeking out. The other tattoo is a pig hand-cranking himself through a meat grinder. It’s morbid, but it represents me when I used to make charcuterie at the Black Hoof.” 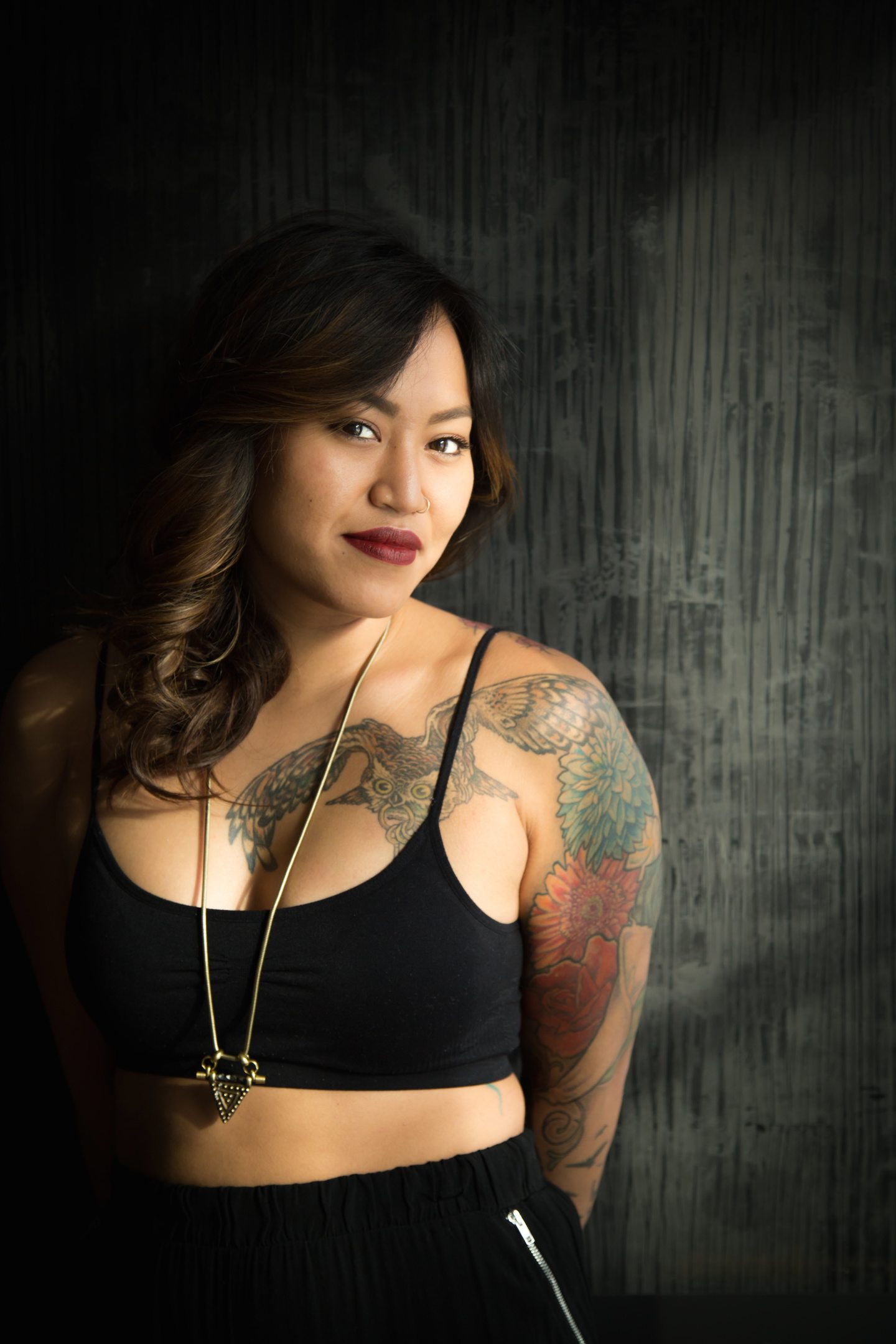 “I only have tattoos on the left side of my body and plan to keep it that way. I like the idea of yin and yang, of having one side covered and the other bare.” 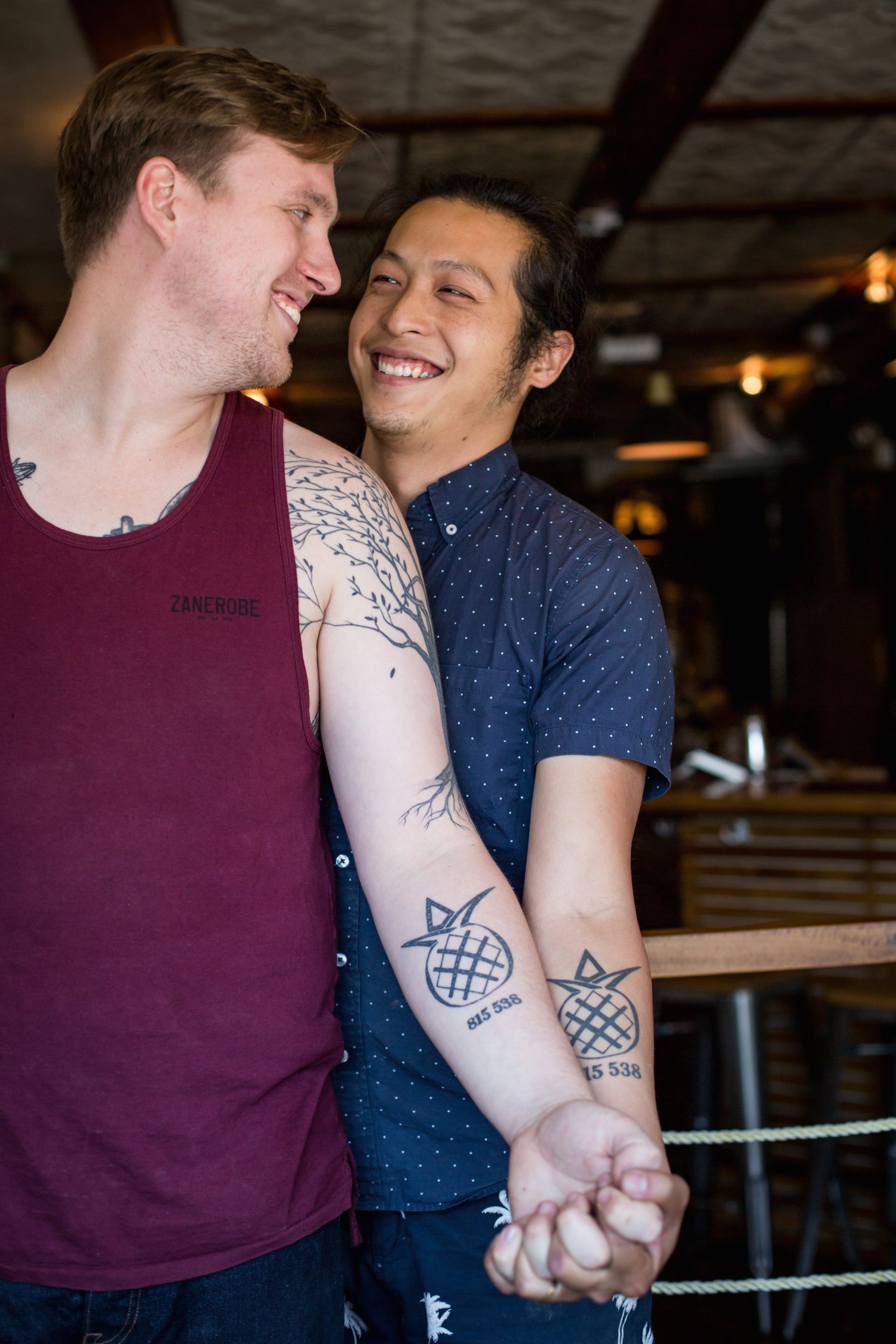 “We talked about getting tattoos to celebrate opening Civil Liberties, but I didn’t think they’d match,” says Huynh. “I got the pineapple with our liquor licence number. Then Nick got the same.” 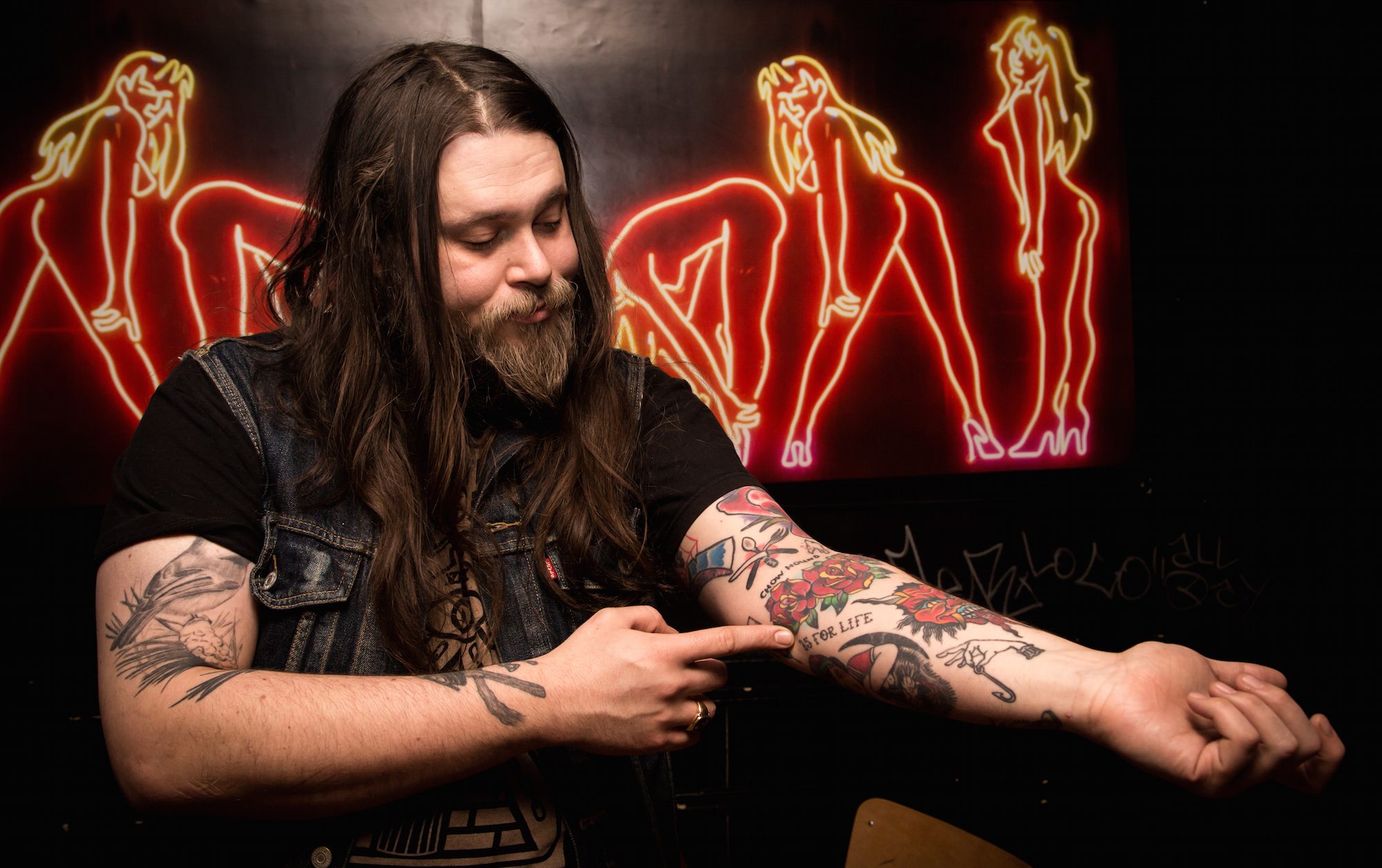 “My tattoos are spontaneous and without any real depth—just fun pictures. I got the ‘chowhound’ tattoo, above the roses, at random by spinning a wheel at a Sailor Jerry event. The ‘25 for life’ tattoo? I was at the tattoo shop and two guys were getting matching tattoos for a 25th birthday. I decided I wanted it, too, so I got it with them. I was 28.” 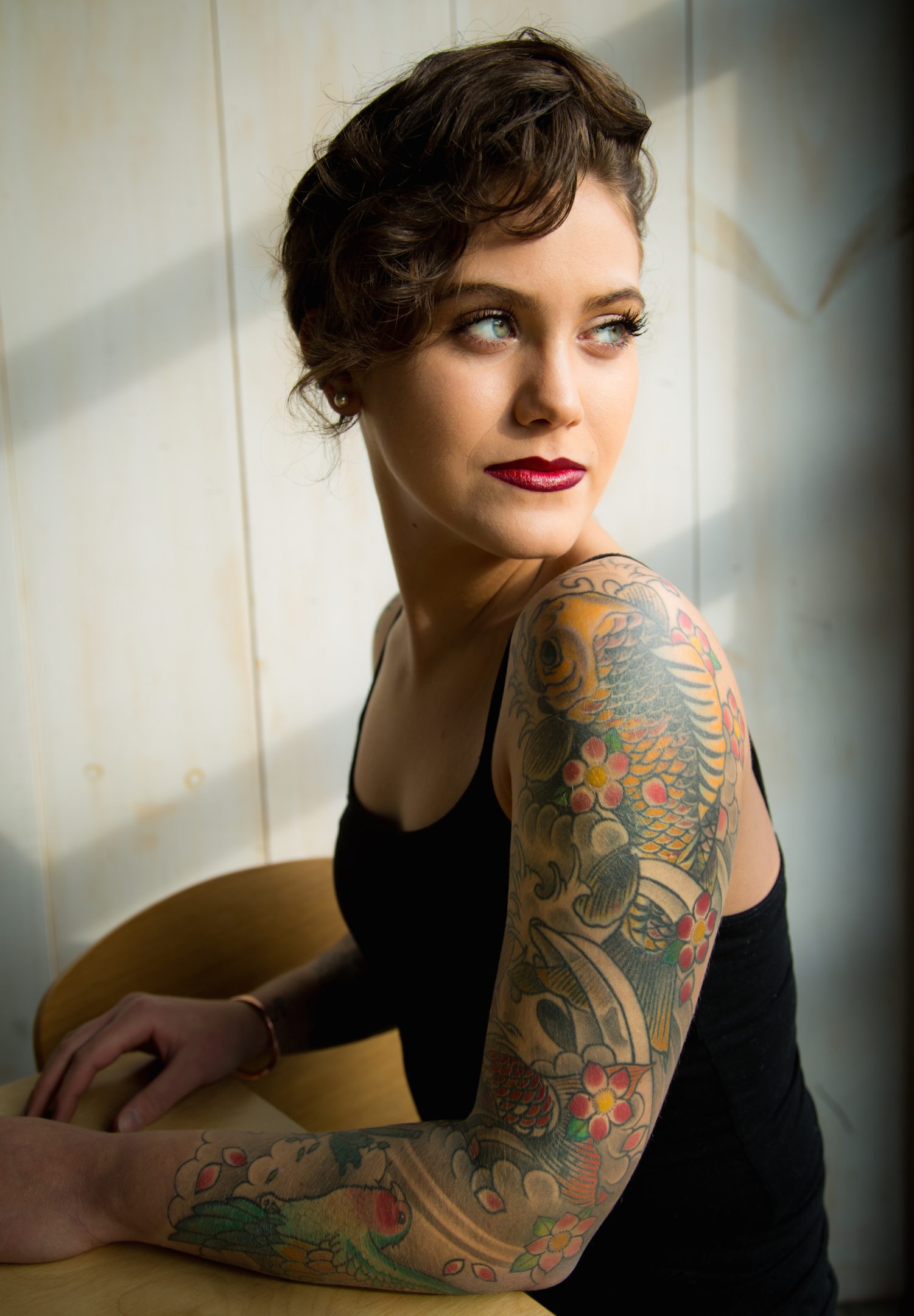 “I got my first tattoo in memory of my Nonna. She took care of me growing up, and she’s the one who taught me how to cook.” 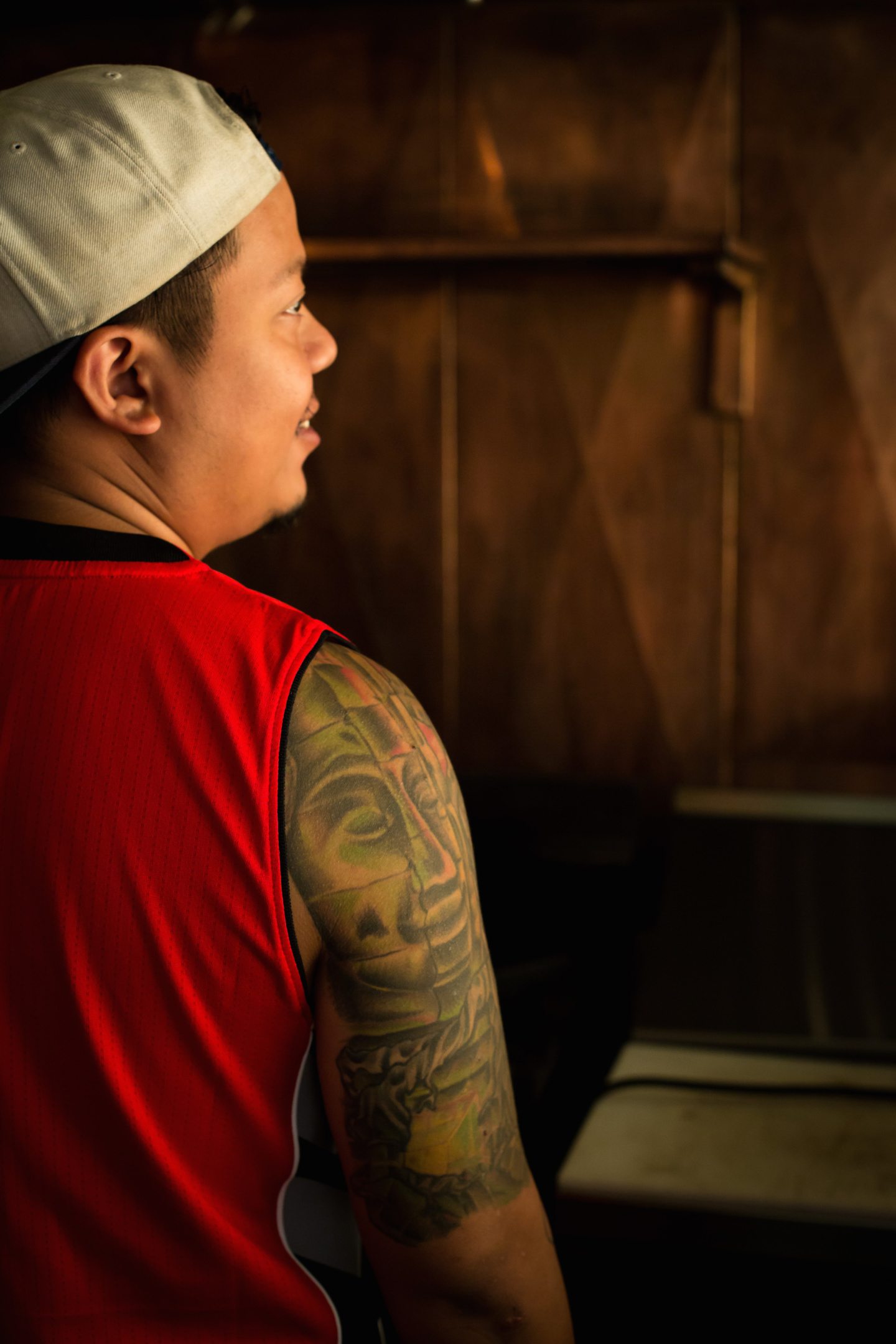 “My parents are Cambodian. They met in a Thai refugee camp after fleeing during the rule of the Khmer Rouge. They married so it would be easier to get refugee status in Canada. My tattoo is of the temples at Angkor Wat, a tie to my heritage.” 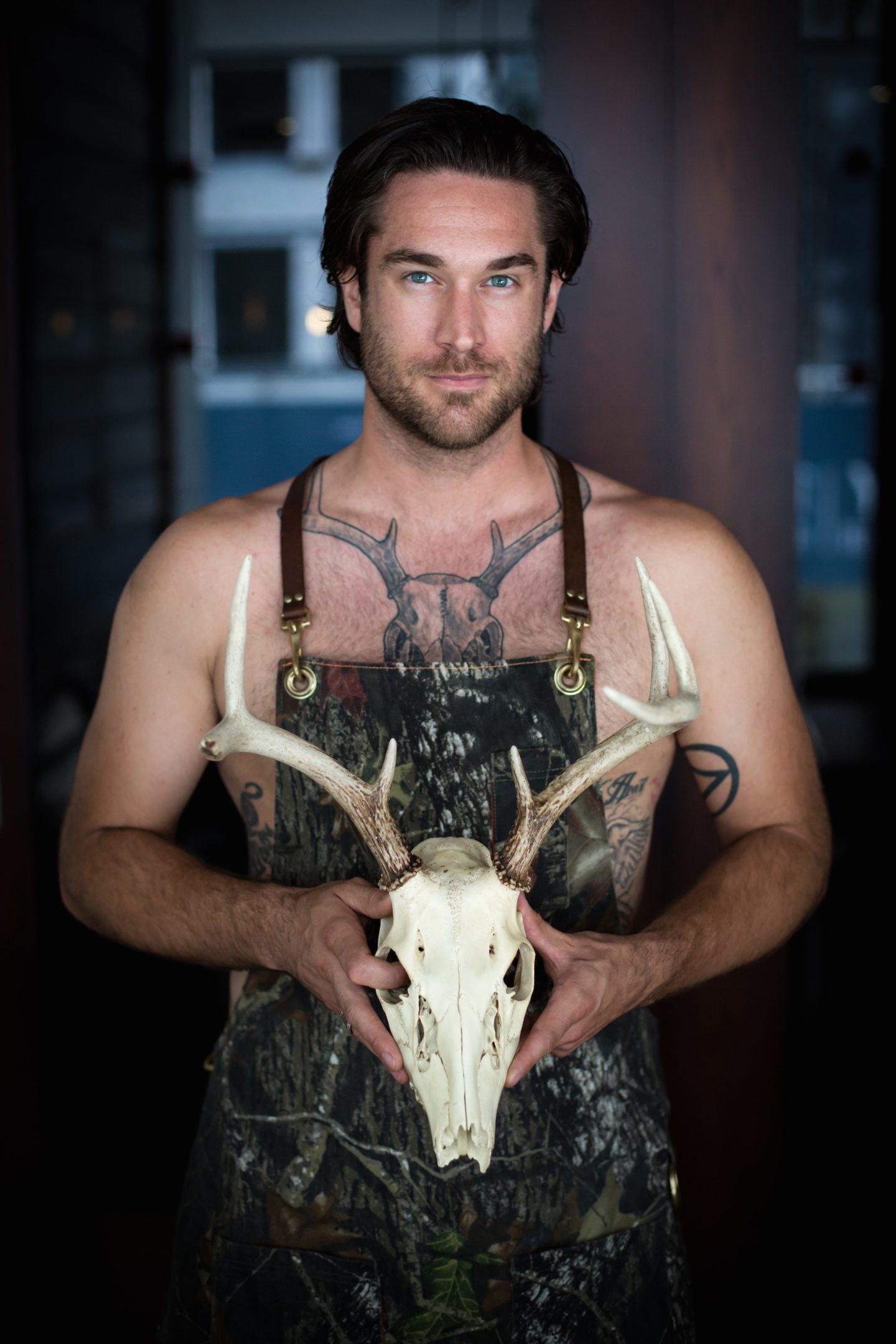 “The tattoo on my chest commemorates the first buck I shot, which is hanging in Antler. I hunt for meat, and it was a special moment. It’s a reminder to be grateful.” 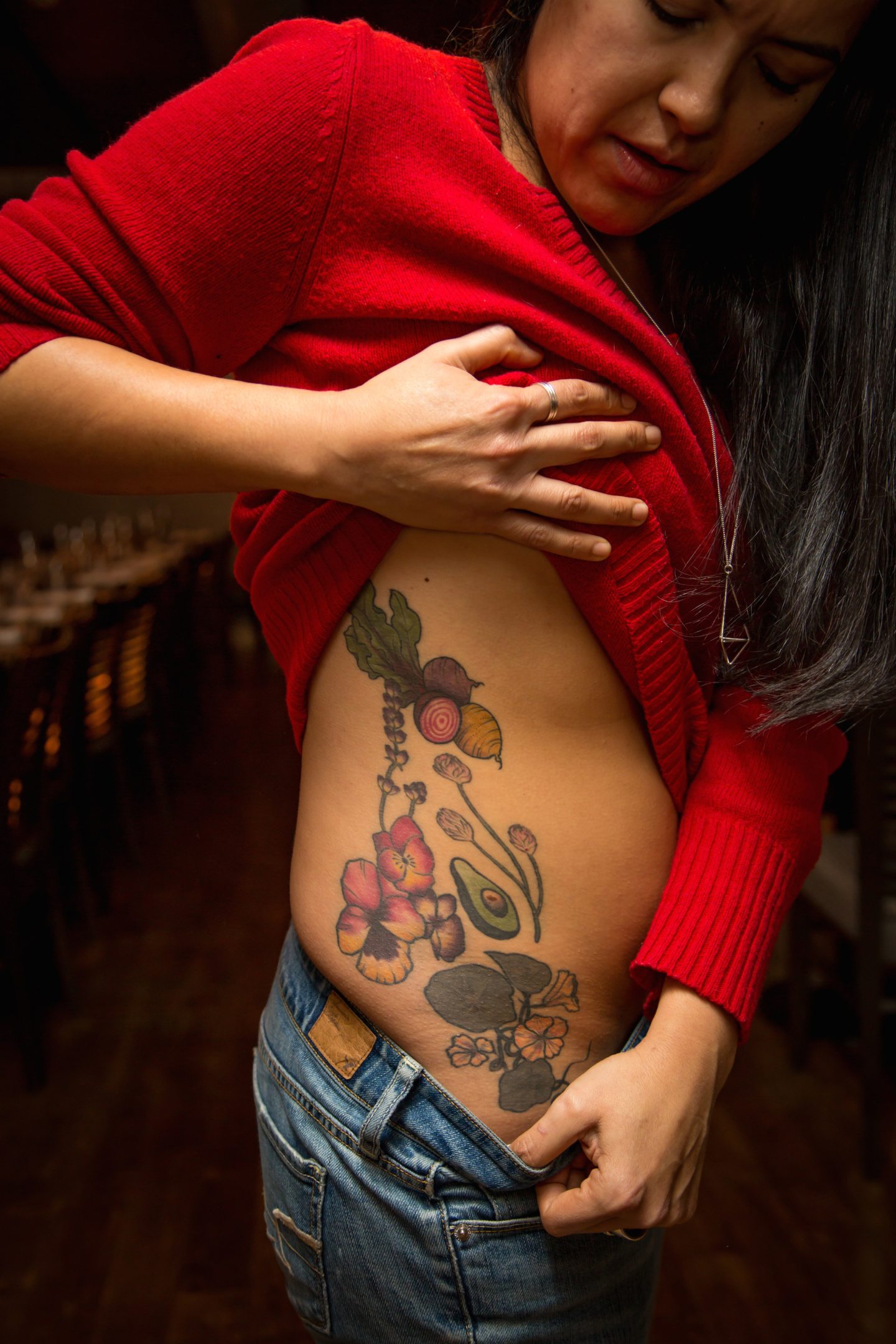 “Beets are very versatile to cook with. My dad, who passed away 25 years ago, used to drink a glass of beet juice almost every day. He loved beets and now I do, too.” 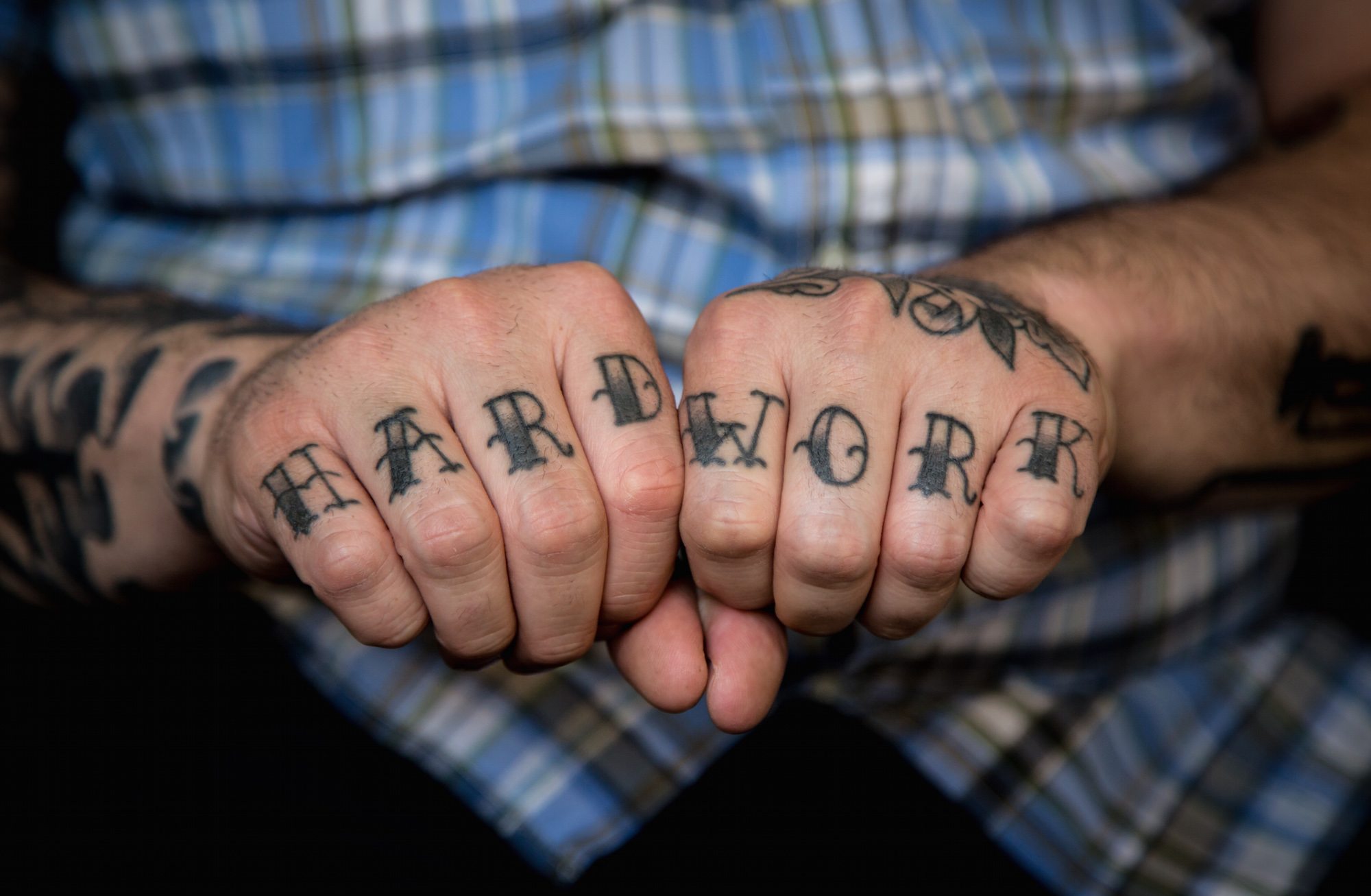 “My knuckle tattoos are a reminder of how I got here and what I need to do. On my left hand, there’s also a bouquet of roses with a ‘mom’ banner, because my mom said, ‘If you get another tattoo, it’d better have my name on it.’ To be fair, I got my right hand tattooed with the Montreal Expos logo for my dad. When I went through my shitty, rebellious teen years, the one thing my dad and I could always talk about were sports and the Expos.” 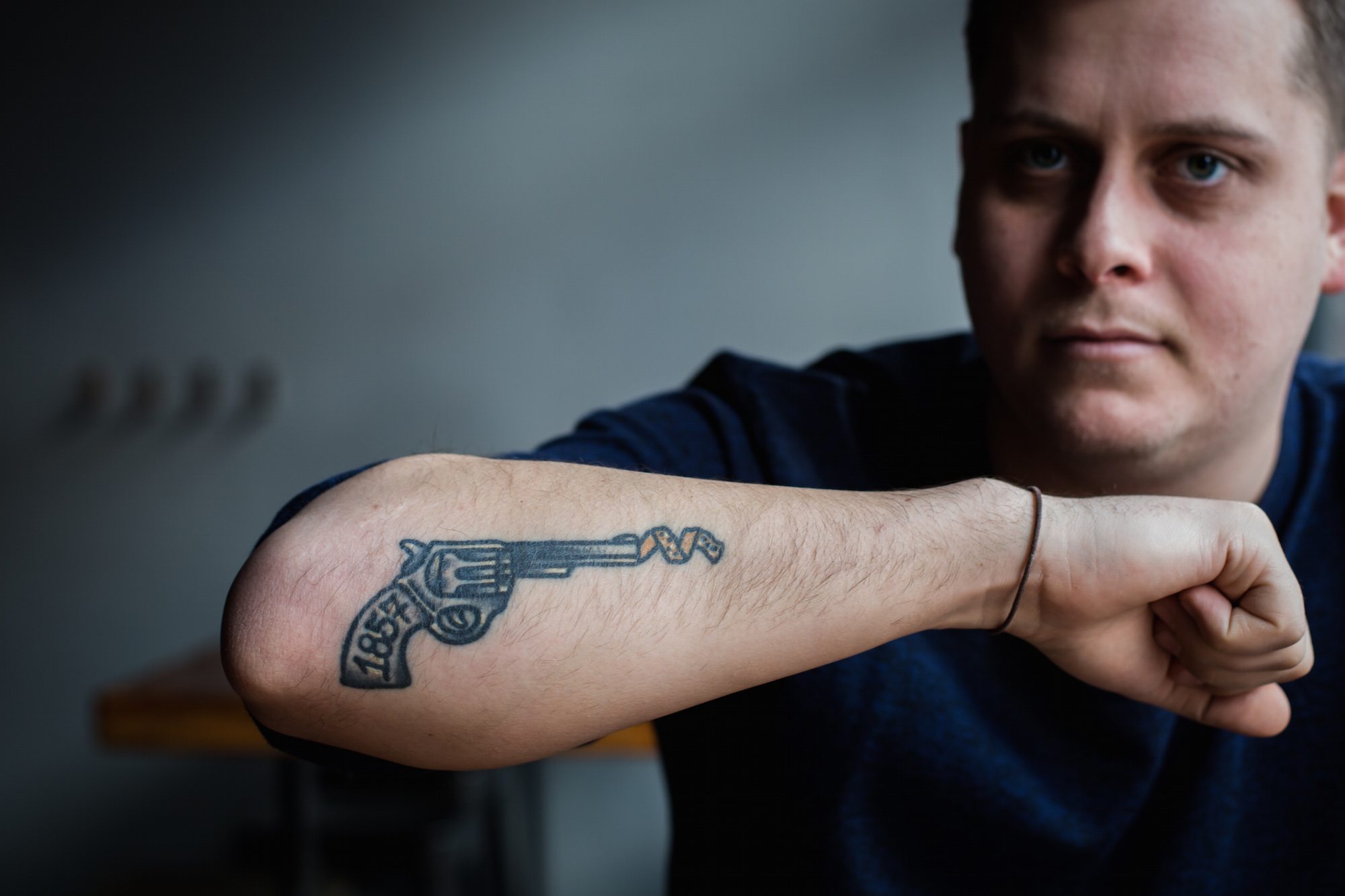 “The 1857 on the gun handle is for the year the Miller Tavern was built. It was the first place I really got into bartending and making cocktails.” 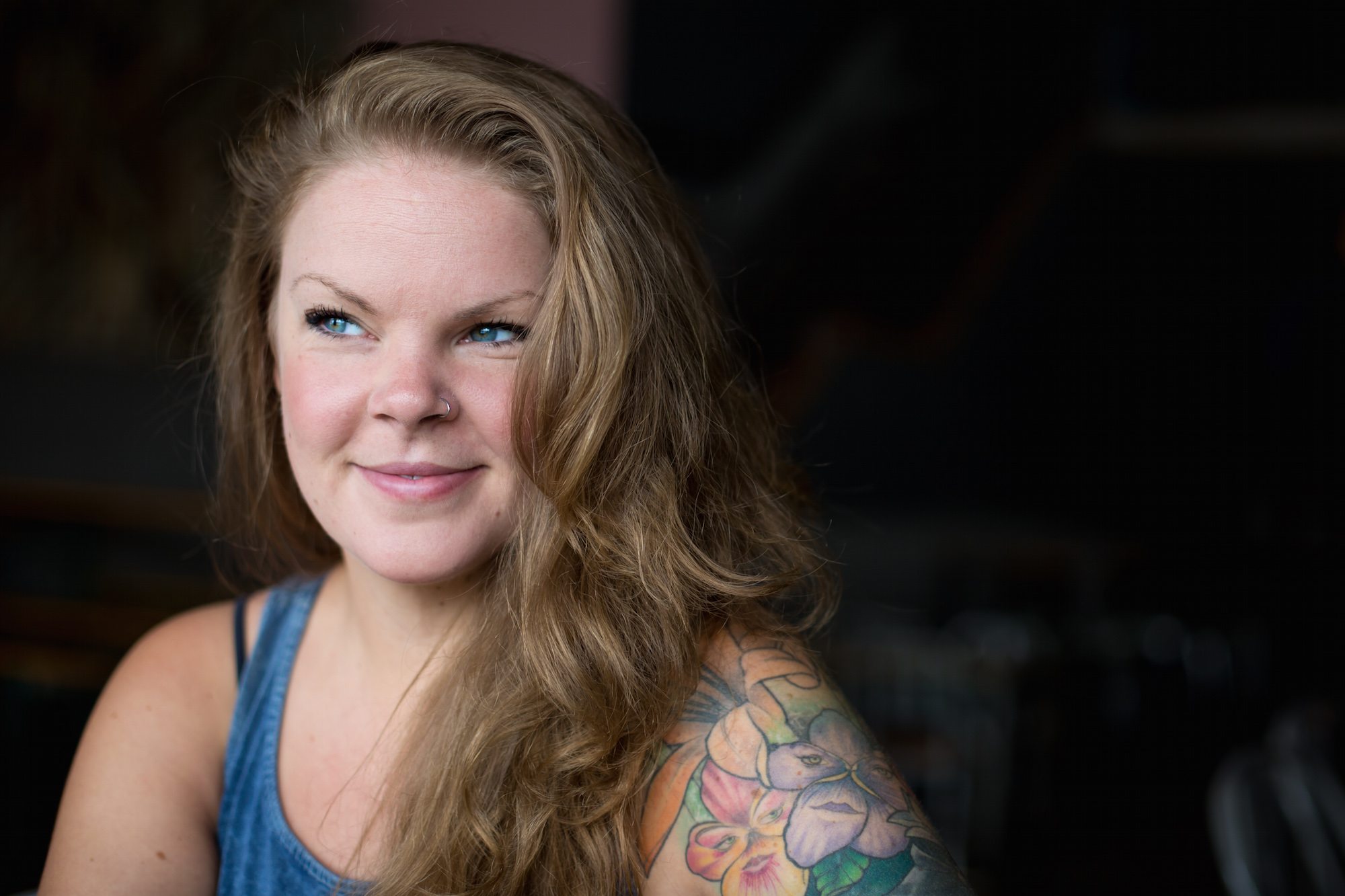 “I got my first tattoo when I was 17. It was an arm band done by a friend, an aspiring tattoo artist who’d been practising on grapefruit. It has since been covered up by my half sleeve of flowers inspired by Alice in Wonderland.” 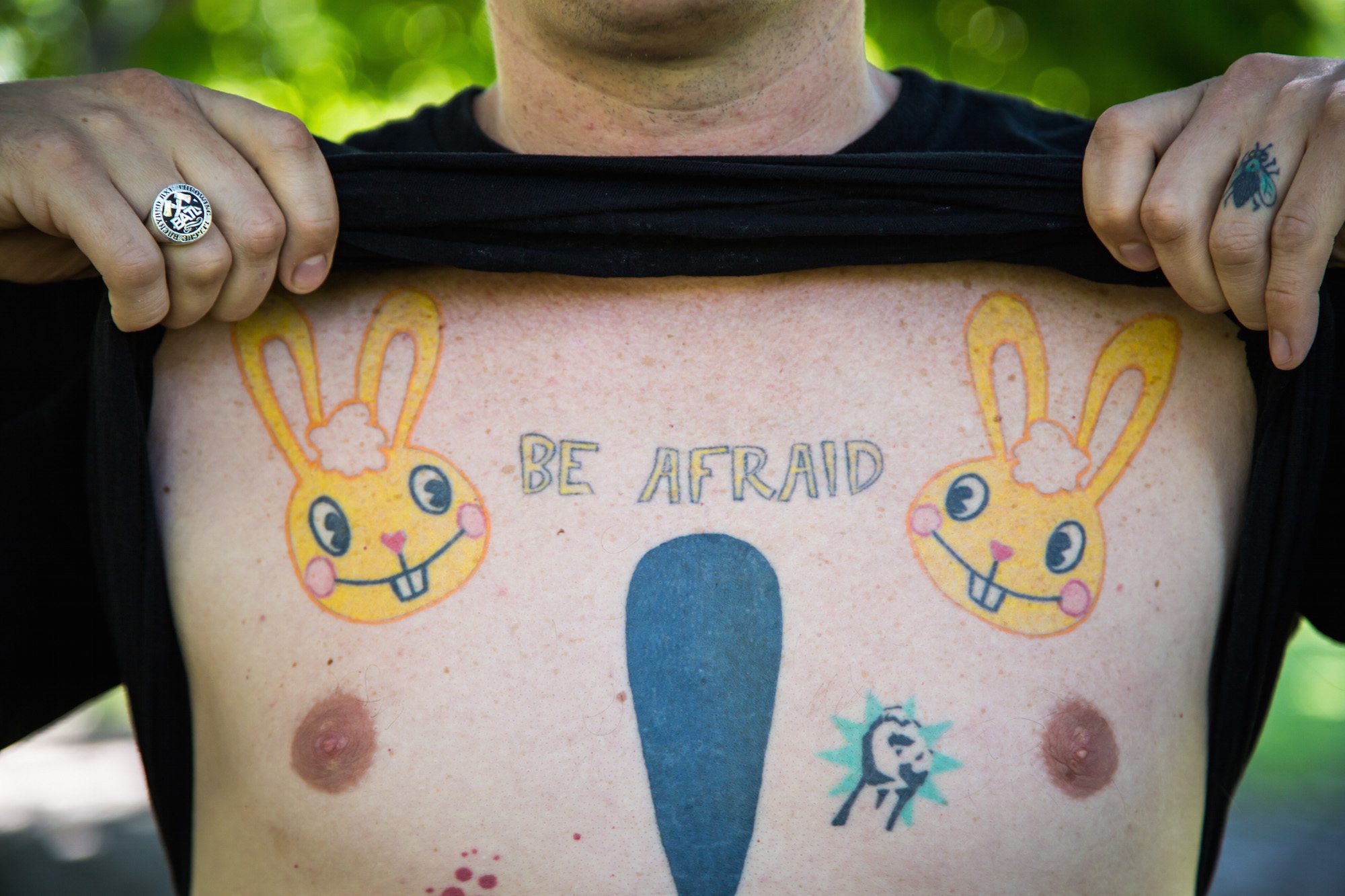 “I used to work in a tattoo parlour and would see these big guys come in wanting the toughest chest tattoo they could get. I decided to get the least-intimidating chest tattoo. Just getting it is hard enough; you don’t need it to look tough, too.” 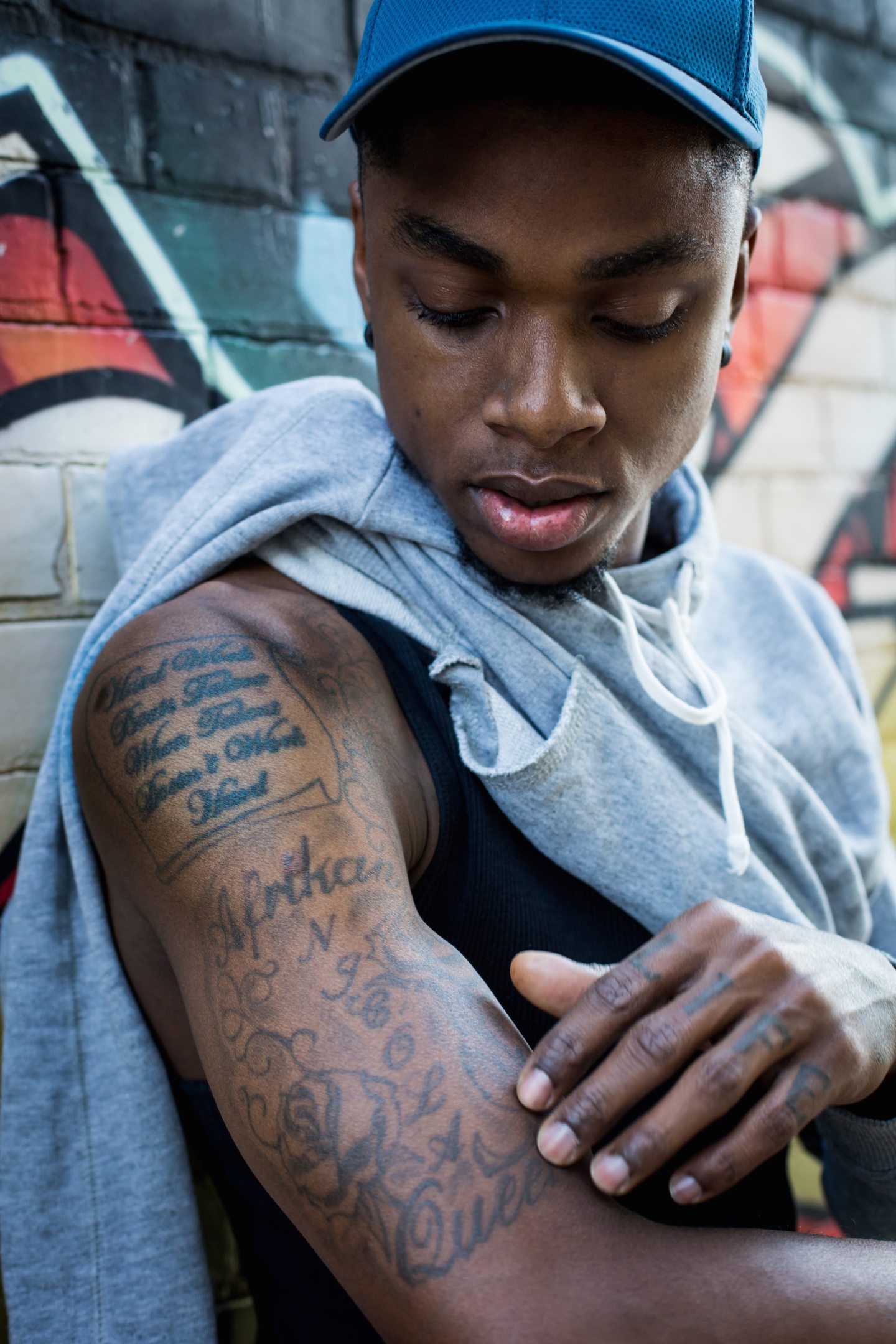 “I got my first tattoo on my shoulder when I was in high school. It says, ‘Hard work beats talent when talent doesn’t work hard.’ It had a lot of meaning when I was playing basketball back then and still does now in the kitchen.” 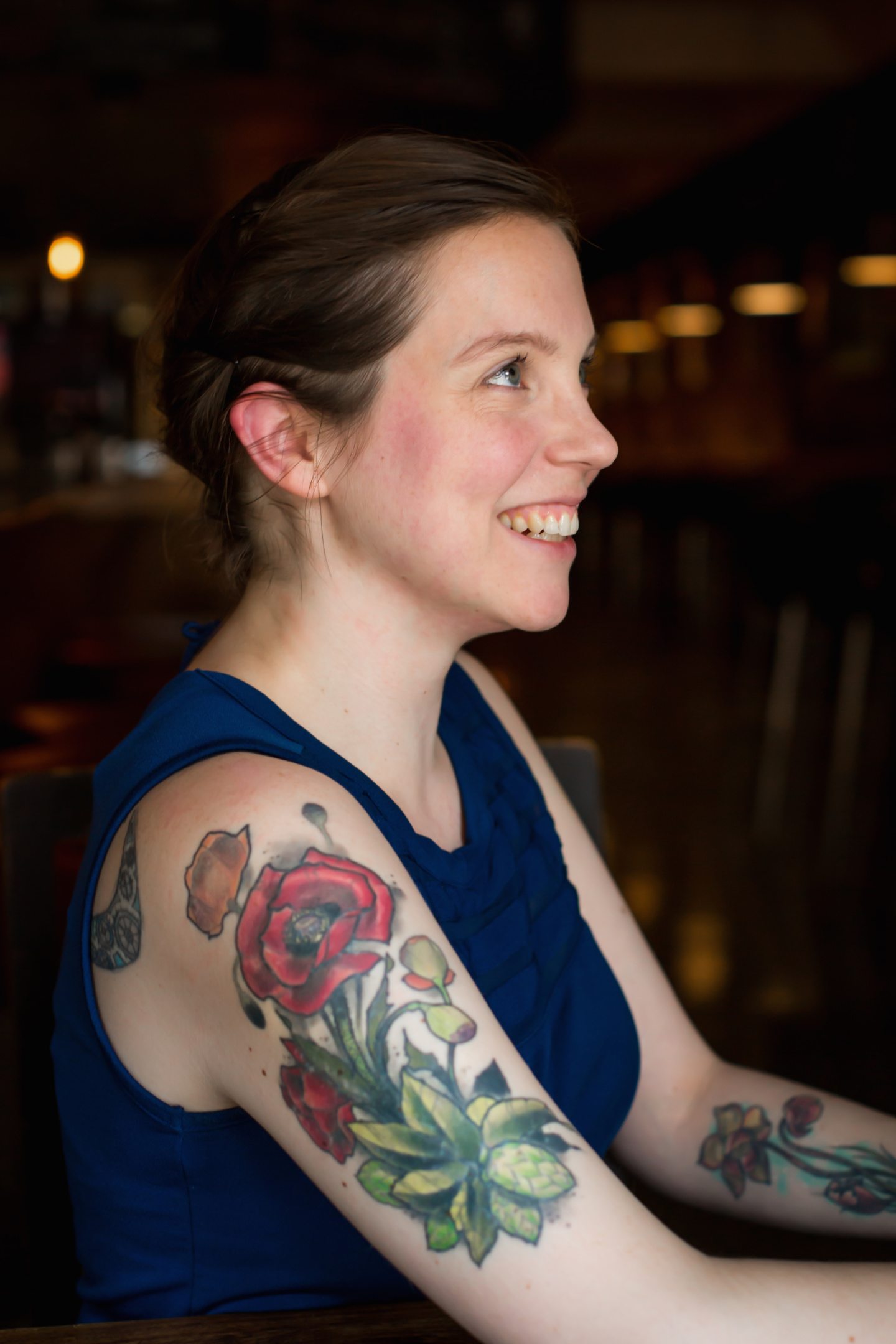 “Before getting into brewing, I wanted to be a sommelier. Cantillon Vigneronne, a beer blended with grapes, is like a mix of both worlds. I showed the bottle’s label to my tattoo artist, and he came up with this design, which incorporates hops.” 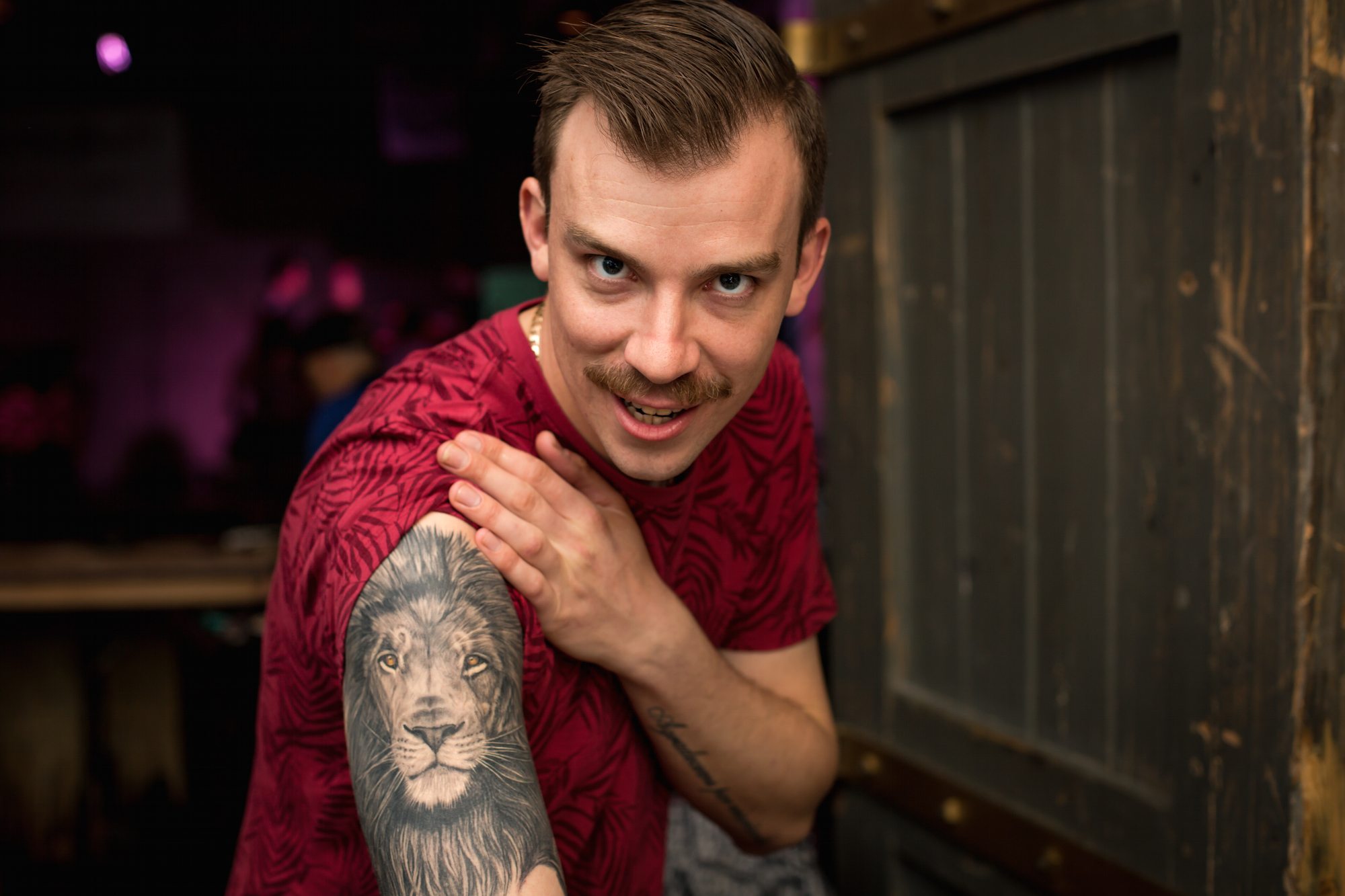 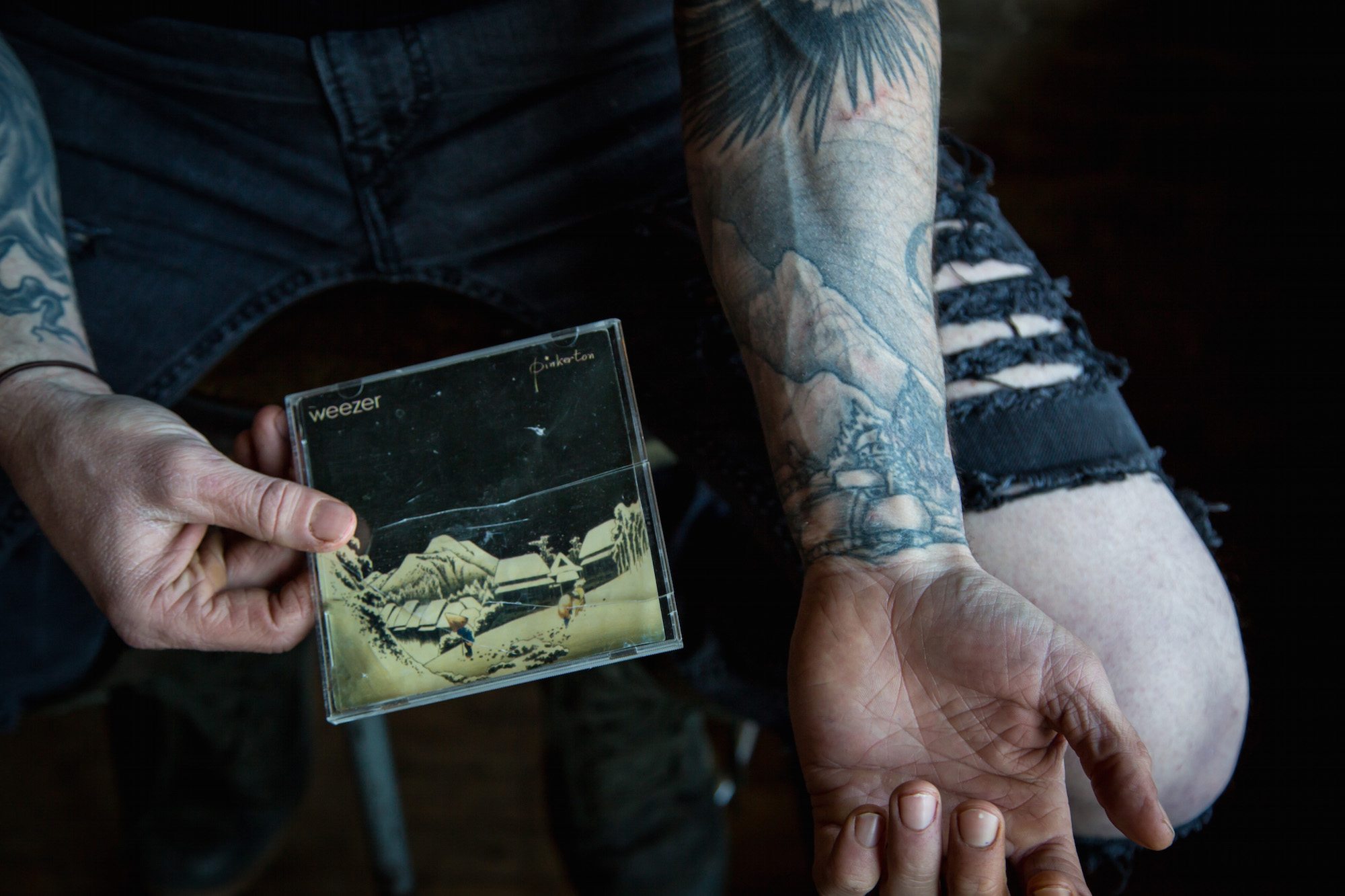 “I love Weezer’s album Pinkerton and got this tattoo way before opening Pinkerton Snack Bar. When we were picking the name of the restaurant, I realized that I’ve loved this album for a long time.”