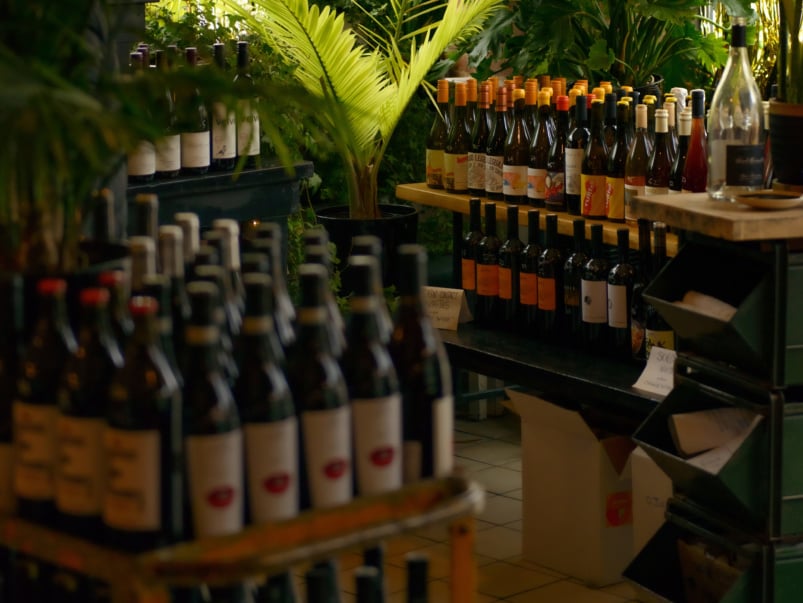 Toronto has no shortage of great breweries right now, but the rest of Ontario is a veritable ice-filled cooler packed with breweries galore. Whichever way you’d like to head—west to London, east to Prince Edward County, or into the north—there’s a road trip there for the taking this summer. Here are some of our favourite drives with a brewery at the other end—just remember to choose a designated driver, or save the suds for when you get home.

A trip to Willibald’s distillery-slash-brewery is akin to a day on the farm—if that farm was run by a group of young, fermentation-obsessed distillers. There’s a dog dutifully watching over the fields and a full biergarten restaurant offering a menu of pizzas, falafels and burgers (all topped with ingredients grown almost entirely on the property). For those who like their beer hoppy, Willibald has a rotating selection of excellent IPAs made with local hops. Not a beer drinker? Look for the excellent hard seltzer made with concord grapes, and grapefruit-rhubarb cocktails. 1271 Reidsville Rd., Ayr, drinkwillibald.com

The newest kid in P.E.C.’s ever-growing beer scene, Slake is perched high atop a limestone hill on the east side of the county. Right now they’re focusing on crisp, clean lagers and ales, though barrel-aged and mixed-fermentation beers made with 100 per cent Ontario malt are also in the works. Beer aside, the brewery offers panoramic views of the region, with fire pits and outdoor picnic tables to catch one of the best views around come sunset. Snacks come from the nearby Bloomfield Public House: think seafood conservas and adult Lunchables chock full of charcuterie, cheese, pickles and breadsticks. 181 Mowbray Rd., Picton, slakebrewing.com

While you’re in the County, Gillingham’s patio offers a slew of beers for the wine-weary. There’s a covered patio and beer garden (think more upscale terrace than Oktoberfest tent, a soundtrack of vinyl records, and freshly shucked oysters by the dozen on Sundays, while Tikka Chaat Indian Street Food takes over on Fridays. Sip the Brut IPA, a sunshine-y, thirst-quenching beer with big effervescence and bright citrus, and be on the lookout for Nigel, the brewery’s adorable four-legged mascot. 1316 Wilson Rd., Hillier, gillinghambrewing.ca

This closed-loop brewery in Blyth engages in a wide range of green measures to ensure their carbon footprint is next to nothing. A tour of their brewery will show off a few of these, from an underground aquifer to onsite gardens and various elements of their carbon sequestration program. Or, skip the tour and stop into the restaurant to dig into house-made pastas that incorporate grains leftover from the brewing process. Their current patio situation includes a draught-mobile flanked by local food trucks, where diners and drinkers sip pints under a tent. The beers lean on the breezy, fruity side: think sea-salt grapefruit sours, barleywines, crisp ciders and lagers. 40035 Blyth Rd., Blyth, cowbellbrewing.com

This might be more of a weekend jaunt than a day trip, but Split Rail offers one of the more picturesque patios in the province, situated on the banks of Manitoulin Island. (Boaters can even indulge in dockside pickup.) When it comes to the beer, there’s something for everyone, from crisp, mildly hoppy pilsners to richer, roasty stouts. Food wise, well, you’ve got beer, beer and more beer, though they often partner with local bread makers to supply pretzels and mustard for those who get peckish. 31 Water St., Gore Bay, splitrailmanitoulin.com

This Haliburton brewery has become a cottage country staple, boasting two different patios: a food truck–fueled one outside the brewery, and a brand new spot on the waters of Mirror Lake. Beers are inspired by the surroundings, like the Haliburton Forest Lager, made with six different malts and three varieties of hops that give the brew its beautiful amber hue and piney aroma. 20 Water St., Minden; 9201 Hwy. 118, Carnarvon, boshkungbrewing.com

If you’re searching for something of a religious experience, Brimstone Brewing is housed in a former church, complete with stainless windows and a towering steeple. The beer nods to the building’s previous incarnation—there’s a Sinister Minister IPA, a Midnight Mass Chicory Oatmeal Stout and an Enlightenment Blond Ale. Brews are paired with hot dogs, burgers, brisket and other meats made in a massive smoker out back. Bonus: if you’re traversing the Niagara Friendship Bike Trail, the brewery is just off the path. 209 Ridge Rd. N., Ridgeway, brimstonebrewing.ca

This three-year-old Niagara brewery is a destination for both food and drink. Their IPA game is strong. Their sours, equally fantastic. And you basically can’t go wrong when it comes to ordering from the kitchen, but anything that involves fried chicken is a must-try. If you’re not into meat, the fried cauliflower plate is the thing to get. And oh gosh, the bread. The bread. A serving of their sourdough with cultured butter is worth the trip alone. 3659 Stanley Ave., Niagara Falls, counterpartbrewing.com

Collective Arts has transformed itself from a small, arts-adjacent brewery in Steeltown to one of the largest brewing outfits in the country, with beers stocked at award-winning restaurants across the continent. Despite their rapid growth, the Hamilton headquarters is still a community hub, with an always-bustling beer garden and quieter tavern space. There’s a wide range of activities to keep the suds-fuelled folks on the patio entertained, from musical bingo to stand-up comedy nights. Breakfast sandwiches are offered at the brunch hour while Asian street food is available throughout the day. 207 Burlington St. E., Hamilton, collectiveartsbrewing.com