Guangzhou-born sushi chef Jackie Lin moved to Canada with his family when he was 12, settling in Scarborough. “I was never a downtown guy, I’ve always lived uptown,” Lin says. “Mostly because the food is great up here.” Lin’s parents were great cooks, and he credits them for his love of food. “There’s a famous saying that the communists couldn’t do anything to the Cantonese people, because we only cared about eating,” Lin says. “Anything with its back facing up, we’ll eat it!”

His love for Japanese cuisine started when he was 16. “I watched a few documentaries about Japanese cuisine, and I was quickly enamoured with it,” Lin says. “There was something so captivating about dining at a Japanese restaurant: it’s just the chef and the diner. As a chef, there’s this intimate experience where you’re trying to pour your heart out and convey your passion in each piece of sushi. It is very personal.” After a few years of working at different sushi restaurants, Lin—not yet 19 years old—found himself at Zen.

“Zen felt special right away,” Lin says. “Hardcore sushi fans were coming from all over the city to this ugly strip mall in Scarborough for Japanese food.” He spent the next 12 years honing his skills and learning about fish. In 2016, he opened Shoushin, a Tokyo-style sushi bar where he uses high-quality fish in omakase tasting menus. Lin regularly visits his Richmond Hill fishmonger to see what’s fresh and seasonal. It’s something he looks forward to as it gives him an opportunity to explore the area for new things to eat. Lin discovered this tucked-away Singaporean/Malaysian restaurant during one of his shopping trips. He’s tried nearly everything on the menu and now sticks to two of the restaurant’s best dishes.

Go-to item #1: Bak kut teh (pork rib soup)
Tasting notes: Lin starts his meals here with this Singaporean and Malaysian favourite, a bowl of pork rib soup that’s been slow cooked in a ton of different herbs and spices. “It is delicate but at the same time it has many layers of flavour,” Lin says. “I love that medicinal quality that it has because of the herbs and spices.” Lin visits his favourite fishmonger in Richmond Hill once a week. “I’ve enjoyed a long friendship with the owner here,” he says. “Tan has been a fishmonger for over 40 years. I trust what he brings in, and I believe this is the freshest place to buy the fish I want to serve in my restaurant.” On any given day the market stocks dozens of imported fish varieties, and east coast shellfish. From uni to miro and aji, Lin says that the seasonal bounty at Yu Seafood is unparalleled.

Go-to item #1: Sea urchin
Tasting notes: “The uni is almost always fresh here. If it’s ever not good, the owner will tell me not to buy it.” Lin recommends that you enjoy sea urchin roe with some light soy sauce or naked, without any dressing.

Go-to item #2: Salmon roe
Tasting notes: Lin pays a premium for the salmon roe at Yu Seafood because he says the quality is the highest he has come across. “Pop it in your mouth and you’ll get fresh, salty and crisp flavours,” he says. “It can quickly spark an addiction.”

Go-to item #3: Purple stem wasabi
Tasting notes: “We obviously need great wasabi at Shoushin, and Yu Seafood has some of the best,” Lin says. Lin’s hot tip is to pick a root that doesn’t have widely spaced stems. But be careful, it’s not cheap. “This is $19 a piece and I’ll only get a few servings out of one!”

Lin is a fan of the fiery and complex layers of flavours that Szechuan cuisine presents, and he vetted all the restaurants along Highway 7 until he found his favourite. Lin’s friend introduced him to Szechuan Legend; it was love at first sight and he’s been visiting it regularly for the past five years. “Here, everyone is from Szechuan. I know because I befriended them.” Go-to item #1: Spicy wonton
Tasting notes: Lin encourages people to try this fiery dish of boiled dumplings in chili oil. “It just hits all the right notes for me: the skin of the wrapper is delicate and soft, the meat is juicy and there’s a pool of hot oil all around. I don’t order this dish anywhere else,” Lin says.

Go-to item #2: Mapo tofu on rice
Tasting notes: “The tingling sensation is an addiction for me. I love it!” Lin says of the spicy Szechuan dish in which cubes of tender tofu are bathed in a pool of spicy sauce loaded with crushed Szechuan peppercorns, chili oil, fermented beans and ground meat. Lin spends a lot of time in the J-Town complex because it houses some of his favourite Japanese places in town. His favourite izakaya is this raucous joint which he says is packed every single day. “It’s all about the grilled meats here. They cook everything over charcoal but they have real technique, so everything has great texture on top of that smoky flavour.”

Go-to item #2: Tomato ramen
Tasting notes: Izakaya Ju has a variety of ramen but Lin’s favourite is a simple bowl of chicken broth with onion, shiso and tomato. The secret menu item was introduced to Lin by the chef. “It’s very simple but it’s great comfort food. It’s very refreshing but there’s also so much umami.”

Go-to item #3: Black cod
Tasting notes: The restaurant soaks fillets of black cod in a miso marinade for two to three days before lightly grilling it. Lin finds the creamy, sweet fish too tempting to pass up. Lin has a few favourite vendors inside the J-Town complex that he regularly visits. Nakamura Bakery is one of the oldest bakeries in the area, specializing in French and Asian pastries. Lin first met the owner during his days at Zen Restaurant.

Go-to item #1: Green tea red bean cake
Tasting notes: This is one of Lin’s favourite desserts at Nakamura. “I love the bean flavour in my dessert,” he says. “There’s something about the texture that really gets me excited.”

Go-to item #2: Mont blanc
Tasting notes: Mention puréed chestnut and whipped cream and Lin is all over it. “This version is more like a cake but it is very good.” When Lin needs to pick up chicken or meat, he heads to FAMU. The butcher counter is one of the only Kobe-certified vendors in the country, with a rotating selection of cuts that come in from Japan. “The chicken is also very good here,” Lin says of the free-run Mennonite bird that FAMU stocks. “They really know how to source good meat here, and I trust that the animals are antibiotic-free and coming from a good place.”

Go-to item #1: Meats for shabu-shabu (Japanese hot pot)
Tasting notes: Lin recommends the thinly sliced Kobe for homemade shabu-shabu or stir-fry. Also good for Japanese hot pot is the beef shoulder and Berkshire pork loin. “Or you can go the pho route,” he says. “You’ll get some killer-tasting pho if you drop some of these slices in a delicious broth.”

Go-to item #2: Ultra-fatty Wagyu
Tasting notes: Owner Seiko Ishiguro recommends you splurge on a few strips of Japanese Wagyu. “It’s so buttery, it doesn’t taste like meat at all,” Lin says. “It feels like a silk robe on your tongue.” Lin’s girlfriend introduced him to this dessert shop tucked away at the back of J-Town. He immediately fell in love with the mochi desserts, tiny rice cakes made with glutinous rice that come in rotating flavours including chestnut, sesame and green tea. 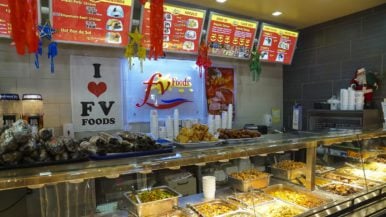