I set up a projector, bought a popcorn machine and transformed my yard into a neighbourhood movie theatre

I set up a projector, bought a popcorn machine and transformed my yard into a neighbourhood movie theatre 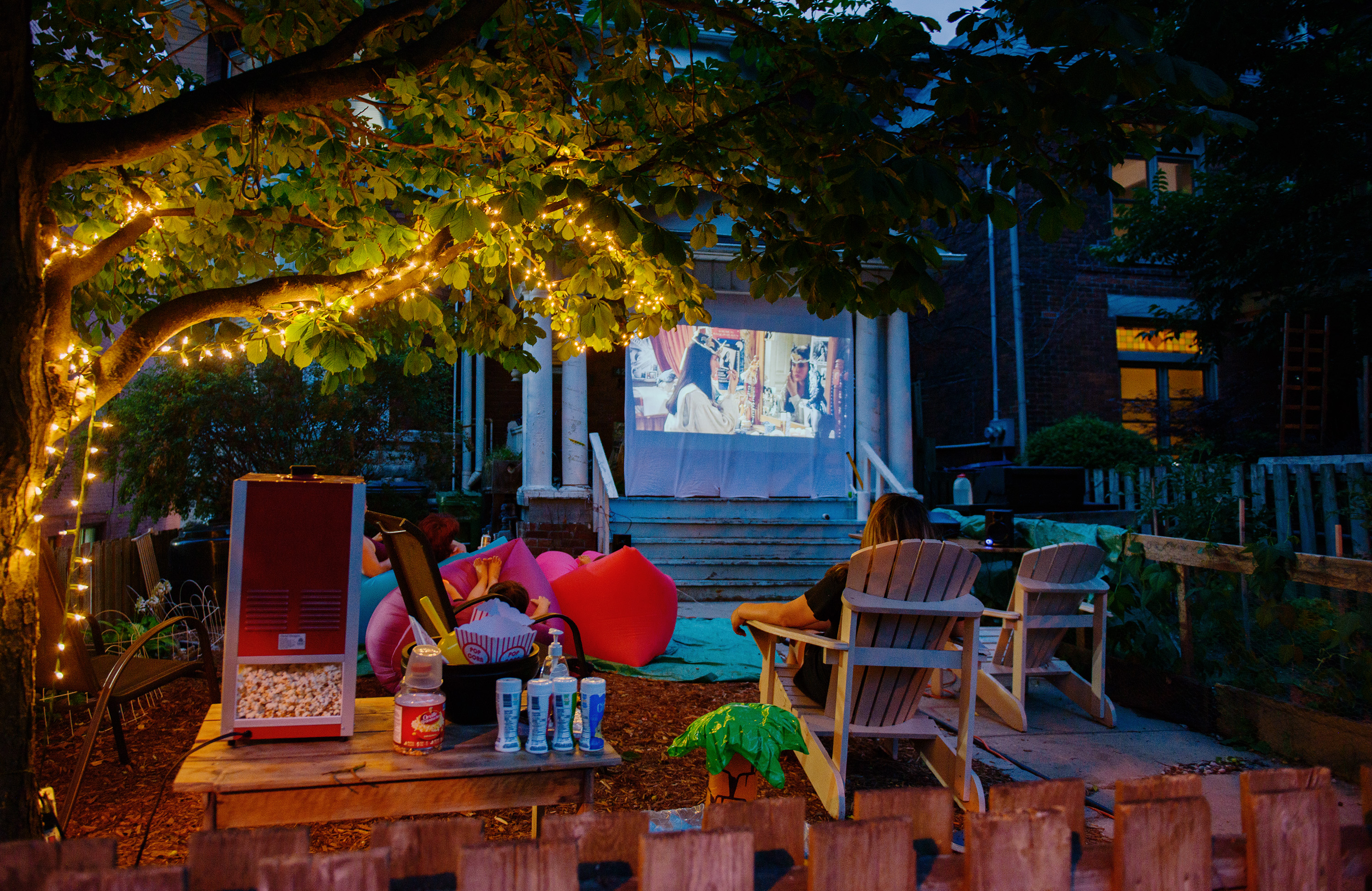 Three weeks ago, Parkdale resident Ami Kilner and her husband, Kyle Binda, bought a projector and set up a weekly neighbourhood movie night in their backyard. Here, Kilner describes how they pulled the whole thing off.

—As told to Kyrell Grant

“I run my own cleaning business and my husband, Kyle, works for Greyhound, but we haven’t been working since the middle of March. We live in a huge Victorian-style house in Parkdale with five separate units. We have the main level, and there are two upper floors and a basement apartment. Since the pandemic started, we’ve mostly been doing housework, focusing on beautifying the outside of our home. We redid our whole garden and the front porch: we put down some red mulch and stones in the yard, and we repainted our patio chairs. Usually, we’re away camping this time of year. We’re experienced campers—or, I should say, glampers, because we’ve started bringing our laptop and speakers.

“About three weeks ago, we were sitting outside, and I said, ‘I want to watch a movie, but I don’t want to be inside.’ I couldn’t handle the air conditioning. At first, we just planned to bring our television outside. And then Kyle went on Amazon and started looking at projectors. We originally wanted a cheaper, smaller, portable projector, but we ended up choosing one on the more expensive end, for $300. It worked out perfectly: the picture quality is great, and we plan to build a home theatre in the future. We hung a queen-size bedsheet off the front porch—it spans the entire width—and set up our projector on the set of stairs that leads to our front walkway. We have some chairs set up on the left side of the yard where we’ve redone the lawn, so we rearranged those. We figured it would mainly be for us and maybe some of our housemates.

“As soon as we put the sheet down, we put the first movie on—we played Bee Movie to test the quality, and the picture was amazing. The first movie we actually watched was Alien. It’s one of our favourites. We didn’t expect our neighbours to join us and enjoy the movie, but they started coming out of the house. Then more people started walking by. First one person sat down, and then another, then a few more. About halfway through the movie I turned around and our neighbours from across the street were watching too. It was all very spontaneous, and people were just loving it. The next day, my husband bought a popcorn machine.

“Initially, we thought we could do it every night, but we didn’t know who was working from home, and we were worried it might be disruptive. In the end we just decided to do it every Friday and Saturday. We didn’t want to get noise complaints or receive bad reviews on our Parkdale community Facebook group. We also wanted to make sure our neighbours were okay with the idea, so we asked all the people across the street and next door, and promised to be done by 11 p.m. each time. Not one person has complained so far—actually, someone did complain, but that was because they wanted to watch the Predator movies instead of Alien.

“We wanted to start screening movies earlier from 6 to 8 p.m. for neighbourhood kids. Once we set the sheet up and started the projector, we realized it was too light and we couldn’t actually see anything. In the summer it’s not dark enough to show movies until 9 or 9:30. We showed the first movie in the Alien franchise, and then we screened Dumb and Dumber. That’s when we got a huge response. I think we had about 10 to 15 people just standing outside. Then we did Aliens, the second movie in the Alien series. Next up we’re planning to do Labyrinth.

“One night, while we were setting up, a little girl and her family walked by. They asked us what was showing, and we told them it was Ghostbusters. They wanted to come watch, but I was worried because their daughter was only three. They said, ‘She loves ghosts and ghouls and zombies. She’s not afraid of anything.’ When the movie started, she loved it. She was literally laughing in her seat. Her parents told us she’d actually dressed up as a ghost the previous week, and she’d been wanting to see Ghostbusters for a long time. That was just hilarious. 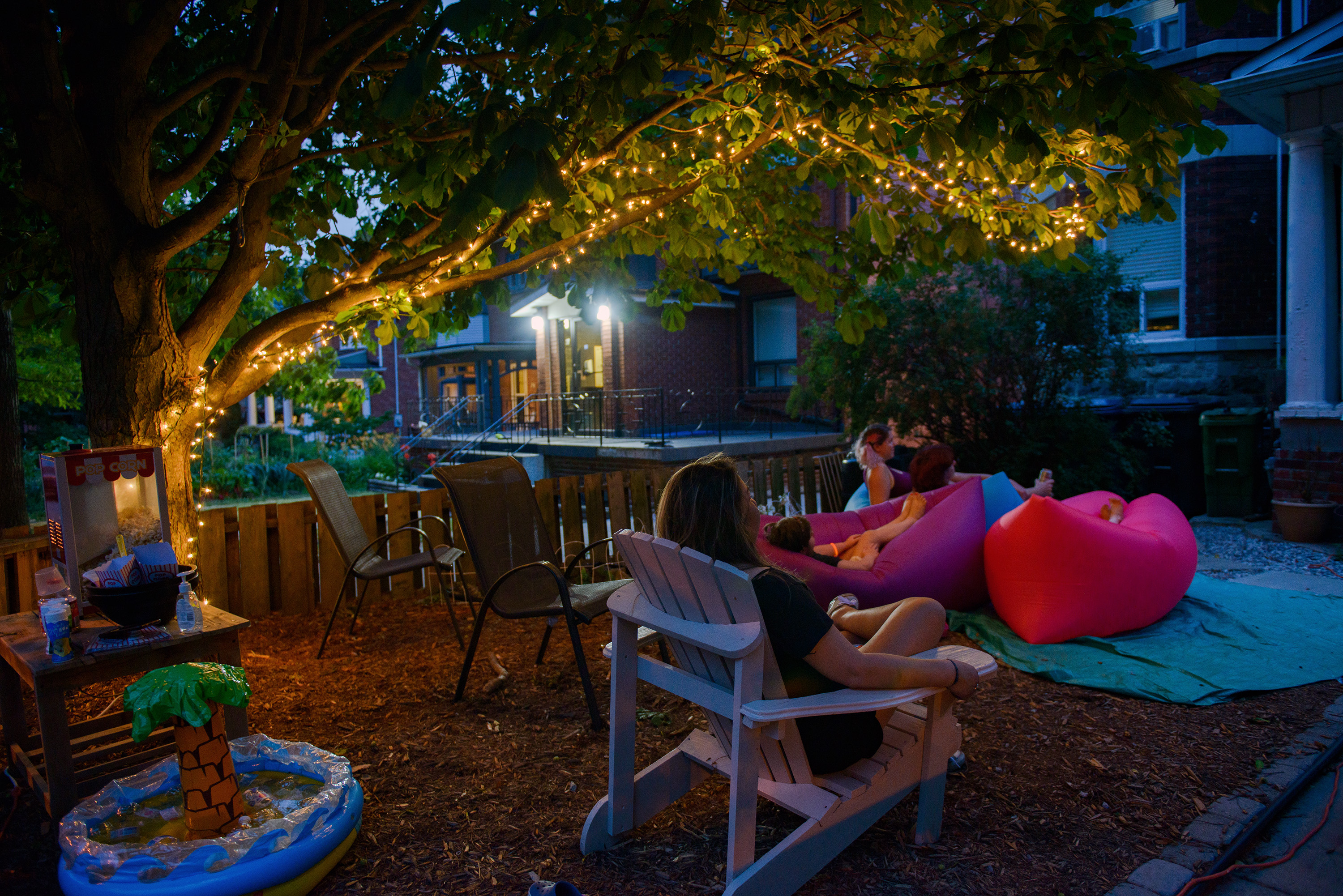 “We’re already pretty close with our neighbours. We socialize with people on our street. For Easter and Thanksgiving, we host what we call ‘orphan dinners,’ and we invite neighbours who can’t go home to celebrate with their families. Now, doing this movie thing, we’ve talked to so many more people. Before, we’d see them all the time and say hello, but now it’s different. Whenever someone walks by, we say, ‘Oh, hi! What’s your name and do you want a hot dog?’ We’ve also met a lot of people through our neighbourhood Facebook group, which has around 2,000 members. I get people on Facebook messaging me and asking me to come. Other times, we see people on the street and they’re like, ‘Are you the people? The couple who does the movie theatre?’

“I can’t believe something so simple turned out to be this big. We would do movies every night if we could, but people have to work, so we’re keeping it to Fridays and Saturdays for now. When our neighbours ask us what to expect, we tell them we’re practising social distancing. We have 10 chairs spaced out in our yard and on the streets and our driveway. We tell people, ‘Please come and watch. Don’t be inside. It’s just so nice out, and there’s a nice breeze, and we have popcorn and hot dogs.’ We’re totally happy to do this for our community.”