Forty-three of Canada’s most distinguished authors were invited to share an evening with over 400 guests last night, raising $190,000 for the Writers’ Trust of Canada. Members of the literary elite like Margaret Atwood, Lawrence Hill, Karen Connelly, Michael Lista and Jane Urquhart were presented with white medals alongside more unexpected authors, such as Fashion Television host Jeanne Beker, politician Michael Ignatieff, celebrity chef Mark McEwan, Hockey Night in Canada’s Ron MacLean and Dragons’ Den’s Kevin O’Leary. Authors were scattered throughout the space, each seated at a roundtable of paying guests—every attendee received an autographed book from their table’s author. “We’re trying to expose writers to an audience. If people meet the author, they’re more likely to not only buy the book, but also to become fans of the author,” explained executive director Don Oravec. Proceeds from the night went towards Berton House, a writers’ retreat residence, and the Woodcock Fund, an emergency fund for writers. Check out the scene in a gallery after the jump.

Hill was overheard laughing about his Movember ’stache, while CBC’s Shelagh Rogers gushed over MacLean’s wife Cari, saying “I feel like I know you, especially after reading the book,” referring to MacLean’s October release, Cornered. Beker mingled with Canadian musician and new novelist Sylvia Tyson and was overheard complimenting Atwood on her printed silk jacket (esteemed author, Twitter celebrity and fashion plate). As the guests sat down to dinner, a video featuring Jane Urquhart, Yann Martel, Russell Smith, Graeme Gibson, Lawrence Hill and Anna Porter was played to illustrate why the Writers’ Trust is so important to Canadian writers, and the night ended with a literary treasure hunt with prizes from Tiffany’s, Elmwood Spa and Whole Foods. Nothing like a good treasure hunt (with gifts from Tiffany’s, no less) to quash the myth that the literary community is stuffy. 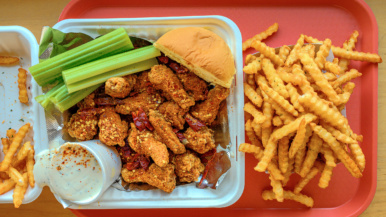